Back from Chicago. While I was there, dayo took me to a place that sells hot chocolate.

Now, this was not any ordinary place selling hot chocolate, mind you. Many places sell hot chocolate–Starbuck’s, grocery stores, even Amazon.com. But this place offered hot chocolate that was different. Better. Beyond the ordinary. I knew something as up when I saw the sign outside the door. It proclaimed, in neon green dry erase marker on shiny blackness, “Our chocolate kicks more ass than Chuck Norris.”

The place was Coco Rouge. 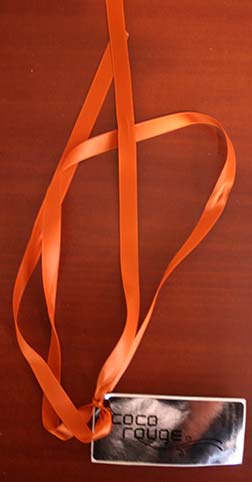 At some time in the past, the place now called Coco Rouge was an alleyway. The sort of alleyway a careless traveller might get rolled in. The building was tall and very narrow, lit by crystal chandeliers and red neon, very BladeRunner-esque. One wall was rough stone, the others polished concrete like the floor. The decor might be described as Late Twentieth Century Pretentious meets Postmodern Gone Mad…very minimalist, very chic, very Apple. Down, even, to the black mock turtlenecks worn by the vaguely pretty, vaguely multicultural but in a non-threatening sorta way staff who took my order, and rung it up on an enormous antique mechanical cash register polished ’til it gleamed like a Terminator exoskeleton.

This was a hot chocolate place from an alternate future, a place like what Starbuck’s might have been in a version of reality where Apple, not Microsoft, ruled the earth.

I chose the house special. Select dark chocolates, it said, bitter and only slightly sweet, blended together to perfection.

Now, from that description, and the reference to Chuck Norris outside, I expected a well and good ass-kicking. You know, the chocolate equivalent of being hit over the head with blunt object and dragged off into some dark corner somewhere. I expected to wake up in an alleyway with a concussion and my wallet missing. That seemed reasonable, I thought, from dark chocolate, bitter and only slightly sweet, delivered in an insulated glass mug that looked solid enough to hit someone.

What I got was something else entirely.

Another sip. Definitely dark chocolate, heavy and brooding, with an understated hint of mayhem. This hot chocolate did not hit me over the head and rifle through my pockets; it seduced me, charmed me, lured me out into the alley on my own. Less work, you see, if you don’t have to drag your victim.

By the time I was nearly finished, I realized that I had been sacked by chocolate, so deftly and so subtly I didn’t even see it coming. No, this was not the chocolate equivalent of blunt-force trauma; this chocolate was more like the experience you get when you meet an exotic stranger in a bar, share a deep and intoxicating kiss, and before you know it you’re waking up in an alley with your pants down around your ankles and your wallet nowhere to be found. No concussion–that’s much to declassé–but you still have no idea how you got there, or how you’re going to explain it to your partner back home.

All in all, a mighty fine hot chocolate.