“Chaos is the score upon which reality is written.”
–Henry Miller

My mother has this saying that she used to use to irritate me with. Any time I complained about any element of my life, she’d look at me and say “It’s a consequence of your chosen lifestyle.”

On the nature of work

The company I work with (and I’m a minority partner in) has been, for lack of a better phrase, on the verge for many years now. The company makes a hand-held storm and lightning detector and tracker; it’s actually a pretty slick little gadget, which can detect lightning storms from about 75 miles away by the extremely characteristic EMP profile produced by cloud-to-ground lightning, and by virtue of a great deal of mathematical wizardry involving fast Fourier transformations and other big words, calculate the distance, speed and direction of travel, and ETA of the storm. It then tracks the storm right to the device.

The company has been desperately underfunded and desperately short of cash for the entire time I’ve worked with them; in fact, for about a year they couldn’t pay me regularly at all. They recently got some venture capital (not enough) and relocated to Atlanta, where they’ve been paying me more or less regularly a quantity that’s more or less sufficient to keep a roof overhead and food on the table.

Recently, they’ve encountered a problem that many startups face without being aware that it’s a problem: they’ve suddenly become too successful. We’re now selling gizmos faster than we can build them, in part because of a significant change in marketing strategy. In the past, these gizmos have sold to military, government, and commercial users; after all, these are the people likely to be left with their ass on the line in a sudden thunderstorm. You don’t want to be climbing telephone poles or cell phone towers with a storm on the way.

But now the gizmo has been picked up by retail resellers–something that we never thought would be significant, because focusing on home consumers never really seemed like much of a business opportunity.

And it’s going bonkers. We’re signing deals with retail chains left and right. Hammacher Schlemmer just bought an entire production run. And this is a problem, because producing more gizmos on very short notice is very expensive, and the fact that we’re selling these things so fast doesn’t mean we’re making money as fast; we don’t see the cash for 30, 60, or even 90 days. But we still gotta pay to build ’em up front.

On the nature of opportunity

When opportunity knocks, it’s always at the most inopportune of times.

For months, I’ve been working on a major revision to my sex game Onyx, which has been going quite slowly for a number of reasons, not the least of which are that this isn’t my day job, the new revision involves a total rewrite of very large sections of code, and the beta testers keep pointing out playability issues which I believe are valid.

Concurrently with this, I’ve also been working on an enormous revision to the Symtoys itself, which will see it become roughly ten times the size it is now and will also sport an entirely new look, as the current site is, to be blunt, appallingly ugly. The new site will have all kinds of kinky sex how-tos, tutorials on everything from rope bondage to improvised sex toys, and even a sex toy store.

Last week, I got an email from the editors of Playgirl magazine. They have a “do it yourself” how-to column, apparently, and in October they want to feature the Symtoys Web site in the column. Which is good, but the timing sucks, since I’m still depressingly far from having the site revision completed. Or if not “completed,” at least in a state where it can be uploaded and made live.

And on top of that, an interested party has offered me an advance on the book on polyamory I’ve been working on (but mostly not working on) for a while now. I really want to finish this book, and now I have a strong incentive to move it to the top of the List Of Things To Do.

I have a pile of proposed changes to the outline suggested by the editor I’d been working with; I need to dust off the files, make the changes, and get back into that again.

I’ve finally got ’round to doing things like registering my car in Georgia and stuff. I got some personalized license tags, for the first time ever: 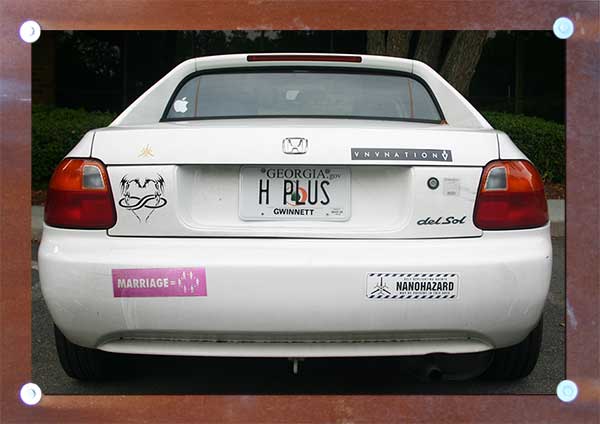 The tag reads “H PLUS,” which only a small number of transhumanists is likely to get. It’s okay, though; the people who do get it are cool. 🙂

I love my little car…

On Links and Stuff

slouchinphysics, you’ll appreciate this one; it relates to the conversation we had last weekend about China surpassing the US as a center for research and technology. It’s an excerpt from a paper published in the 60s about particle physics in China, the prequel to which is a great example of what happens when science and political doctrine collide. But lest we think that the same sort of nonsense doesn’t happen over here: the Creationsits, unable to get their bullshit rubbish published in respected peer-reviewed journals, are trying to create a ‘peer reviewed’ journal of their own. (Props to 6-bleen-7 for the links.)

phoenixgeisha has proposed a challenge: create a CD of songs which, when heard by another listener, give the listener a sense of who you are as a person. I think this sounds like great fun.

Some other folks have created a programming language based on lolcats. Here’s Hello World written in lolcode:

And finally, satellite view of contrail clutter left by passenger airline flights. This is an amazing picture.

Shelly was up over the weekend, and took the kitty Molly with her when she returned to Florida. Now figment_j‘s kitty liam is all I have left.

Liam and Molly didn’t much get along (or rather, Liam was madly, frantically in love with Molly, and Molly didn’t care much for Liam–its a good thing cats don’t feel heartbreak as acutely as people!), so the relocation of Molly was necessary.

I like having Liam. He reminds me of figment_j. The fact that all my relationships are long-distance now sux0rz.