We woke, emanix and I, the next morning with birds chirping all about us. She made breakfast and massive quantities of tea (the latter would soon become a regular fixture on our adventure), and discussed where we would go next.

I do not fully understand, dear reader, what strange malformation of logic gave rise to our decision. Somewhere in that conversation, we lost the guiding light of Reason and Logic, and opted to continue down the narrow dirt road in the direction we were headed, rather than heading back to Liberty, the disappointing ghost-town-that-wasn’t and to our previously established route. Perhaps we thought there was another ghost town to be had at the road’s end, though quite what might have given us that idea, I am not sure.

We packed up the van and proceeded down the track, which gradually grew rockier and more treacherous, until soon we feared getting stuck with every passing yard. We pushed on ahead nonetheless, until finally we came to a narrow but quite rapid stream that bisected the road, or what there was of a road, preventing easy passage. 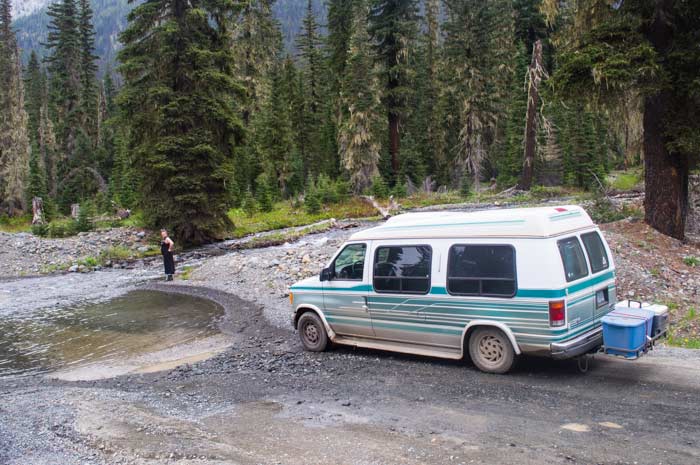 We stood there, debating whether we should risk taking the van through the stream and up the rocky bank on the other side. While we weighed the merits of going on vs. turning around, a young couple in a Toyota Prius pulled up behind us.

They discussed a discussion that followed along the lines of our discussion. “Where does this road go?” we asked them, reasoning (apparently optimistically) that if they were all the way out here, they must have some notion of where they were headed.

Ultimately, they opted to try their luck with the stream. The Prius did that spooky thing Priuses do where it crawled forward with nary a sound, and was soon axle-deep in water. It pulled up on the other side. We waved. They waved.

“Think we can do that?” I asked Bunny. She looked skeptical.

She set about making lunch while I went upstream a bit and looked for some way across. I found a large log, stripped of branches and leaves, and cautiously walked out onto it.

It turns out, gentle reader, that logs partly submerged in water become quite slippery. You may guess what happened next. My feet shot out from under me, and I plummeted like a stone into the stream, colliding with the log on the way down. The spot where I went in was deeper than it looked, and cold, and moving very fast.

I struggled back out of the water. emanix waved cheerfully. “Lunch is almost ready!”

That episode would have a long-lasting effect on the rest of the trip, as I had, apparently, managed to crack a rib on colliding with the log. For the rest of our adventure, I was reminded of that log every time I tried to lie down at night.

After dinner, we concluded there was no legitimate reason to try crossing the stream, given that we had no idea what (if anything) the other side might offer. We packed up and headed back, retracing our route to Liberty, and from there to the next stop on our cunningly-devised plan.

That next stop turned out to be rather a lot of nothing. We followed Siri’s directions to what would, according to the Web, be an abandoned gold mining town high in the mountains, and discovered…trees. And narrow muddy roads.

At this point, we’d decided we’d had quite enough of navigating the van along steep mountain trails, and headed to the nearest major road to regroup. We spent the night at a rest stop, and woke bright and early the next day. Bunny prepared a rather astonishing quantity of tea, and we were off once more. 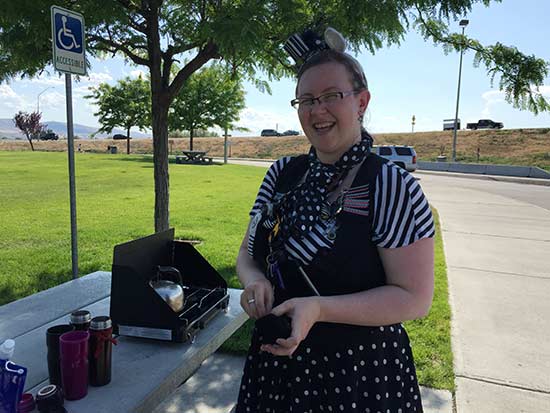 We eventually found ourselves, after many hours of driving, sitting in a small country restaurant in a small town in…well, I think it was Washington, though I’m not convinced I’d wager on it.

“I know!” Bunny said. “We should look at Google’s satellite view of all the places we’re headed, so we can tell if they’re worth going to or not!” Such a simple idea, and yet so brilliant.

We hopped on the WiFi and did just that. The ghost town Web site, as it turns out, was a bit rubbish, and most of the places on our route had either come back to life (“zombie towns,” she called them) or faded into nothingness.

We scrapped our previous plan and, after a bit of frantic Googling, put together a new itinerary. Then we piled into the van once more and started down the road toward Hardman.

Hardman, Oregon was settled in 1879, according to Wikipedia. We arrived shortly before sunset, and finally, we got a taste of some real meat. 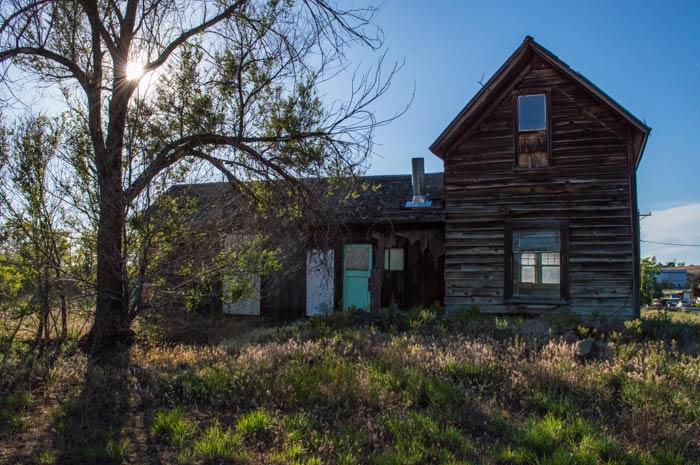 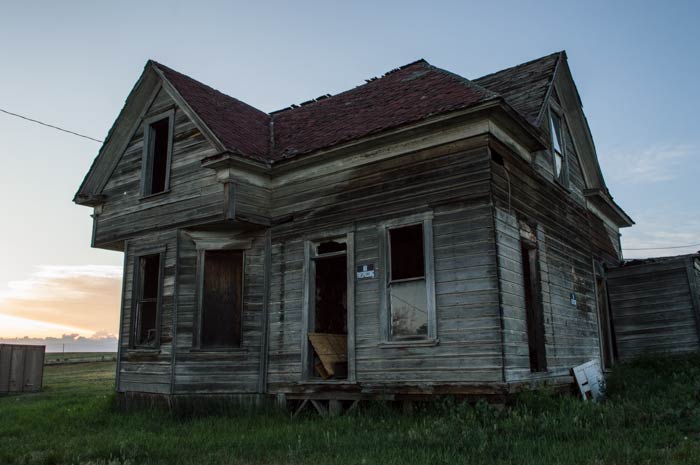 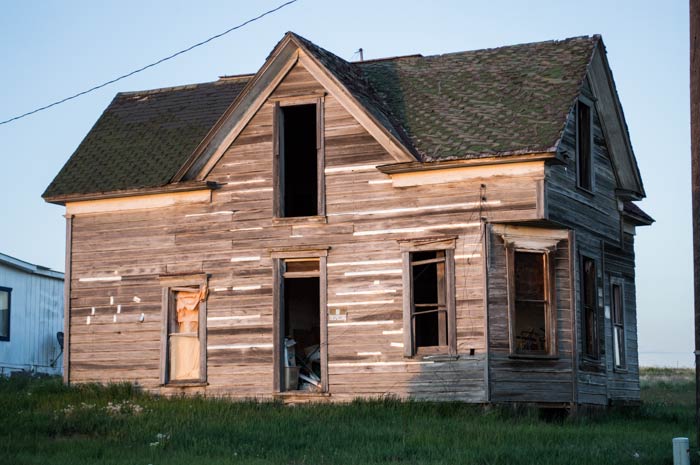 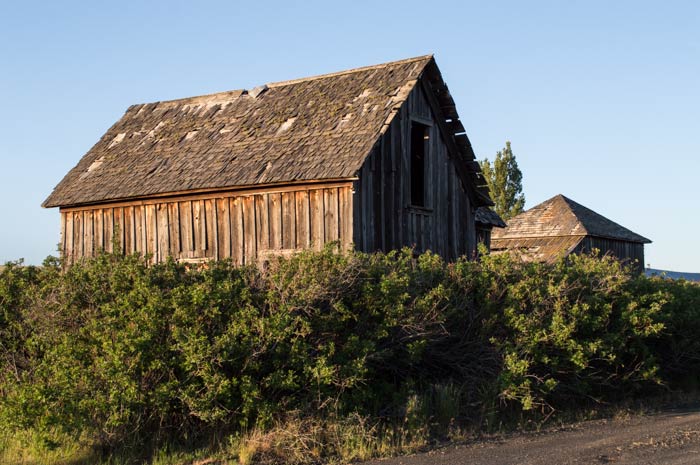 Hardman is not technically abandoned. A small number of folks still live there, and there are trailers and inhabited houses scattered more or less at random through the ruins.

There’s a community center that’s still in use. 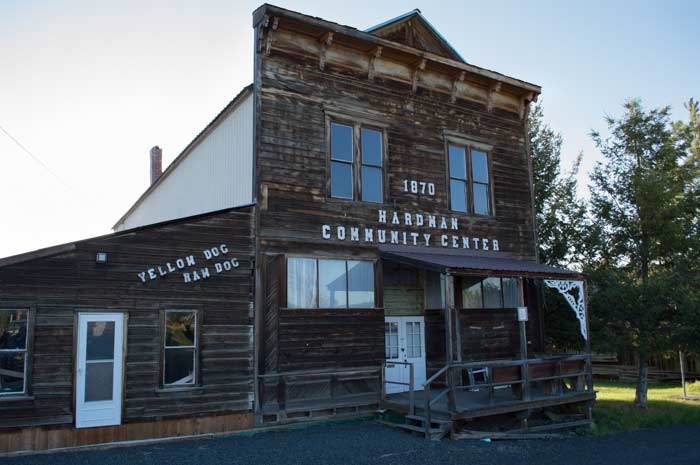 We peeked into the community center. A man who lived in a small shack next to it wandered over. “Want to look inside?” he asked.

He unlocked the door and ushered us in. “Where are you from?” he said.

“Portland. It’s full of liberals. Always telling us what to do,” he said.

He ushered us upstairs and showed us around, talking about the history of the place, the ruins of the post office next to the community center, and how he hunts cats in the fields around the town. 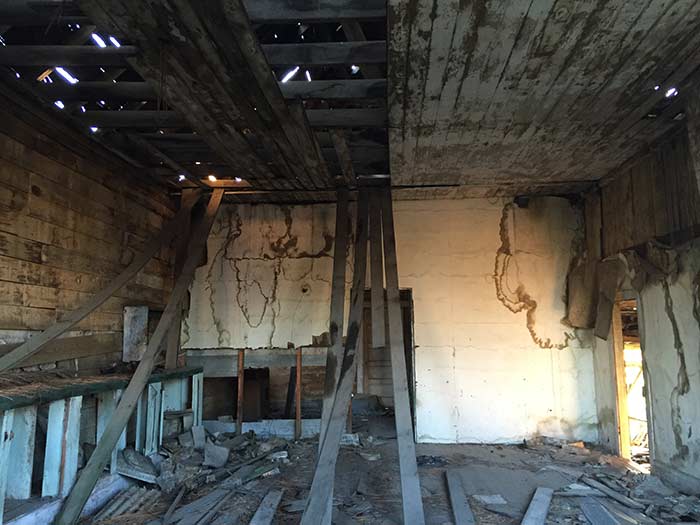 We discovered this lovely hulk quietly rusting away just outside the town. 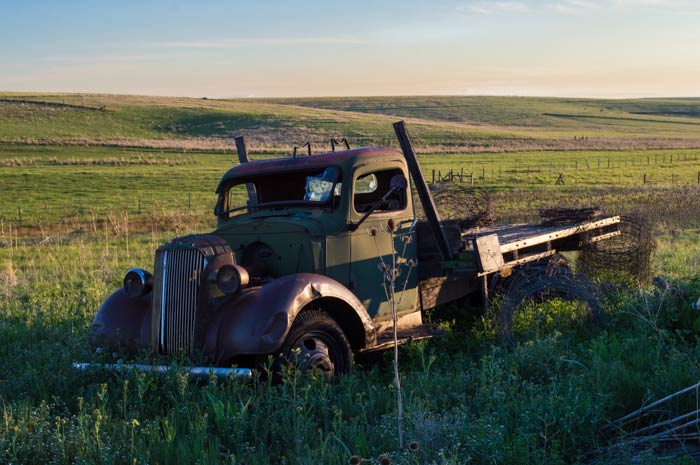 Photos taken, we left town, driving into a most fantastic sunset on the way out. 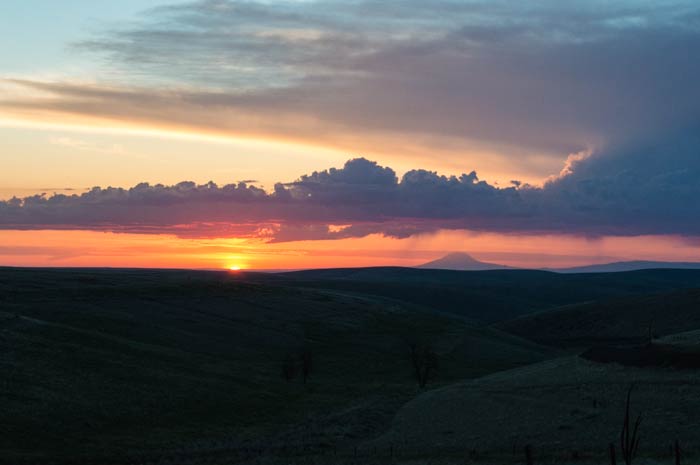 A much more productive day than falling into the water and cracking a rib, all things considered, but the real jackpots still lay ahead.

6 thoughts on “Two Chaosbunnies in the Desert: A Series of Unfortunate Events”