For the past few months, I’ve been dealing with weird pain in my lower back. It’s been an ongoing thing that has followed a consistent pattern: I wake up in the morning in intense pain, take ibuprofen, the pain goes away, I go about my day, and it comes back the next morning.

And so it came to pass that I made an appointment with the doctor, on the day before I was scheduled to head to Canada for several weeks. The doctor poked and prodded my back, made me pee into a cup, asked me lots of questions, and said “hmm” a lot. Then she disappeared for a while, leaving me to sit in a small room with an old-fashioned electro-mechanical clock on the wall that reminded me of the clocks in the elementary school I attended in the plains of Nebraska.

A short time later, she returned to say that whatever my issue was, it definitely wasn’t a kidney infection (take that, Google!) but it could be a kidney tumor, and I should make an appointment for a medical imaging test. Oh, and stop taking ibuprofen, that can aggravate kidney tumors.

Naturally, on my return home, I consulted the Oracle at Google once more, and Google obligingly filled me with horror stories about renal adenomas and such. I also made an appointment to have the imaging done–something that would, they said, take a month to schedule.

Head now completely filled with the possibilities of a rapid and gruesome death, I ventured to Canada, sans ibuprofen.

The pains kept getting worse, and then worse after that, until finally Eve offered me industrial-strength painkillers…that did pretty much nothing. Well, nothing save for making me feel like my head was stuffed with cotton balls, anyway.

So I called my doctor who suggested I make my way posthaste to an urgent care center for imaging.

Now, we live in a twenty-first century world that still clings to nineteenth-century notions of borders. My insurance, as it turns out, is not valid in Canada. So we piled into a car, Eve and I, and drove across the border to Bellingham, where I explained the situation and was admitted with alacrity. 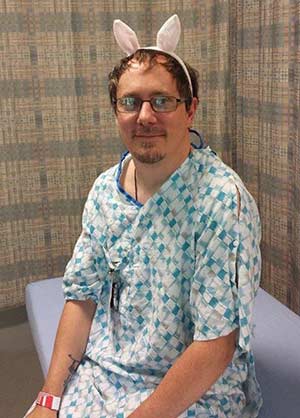 A short time later, I was able to mark “Get a CAT Scan While Wearing Bunny Ears” off my bucket list.

For those of you who have never had a CAT scan, the whole experience is a bit “bureaucracy at the DMV meets a scene from a science fiction movie.” You’re cataloged, bar-coded, and wheeled into a futuristic-looking room where the technician feeds you into a giant machine with displays and blinky lights and a big spinny thing.

That part’s pretty cool. The bit that’s less cool is the stuff they inject you with to make your innards show up better to the machine.

“You will feel hot,” the dude said. “And then you will feel like you’re peeing. Relax. You’re not.”

That didn’t exactly fill me with images of pleasant frolics through a lovely garden, but the reality turned out to be even less pleasant than he suggested. He shot me full of some transparent liquid and I could feel it traveling through my body as a wave of intense heat. Even my eyeballs got hot–something I hope never to experience again. As promised, when it hit my waist, I felt like I was peeing, though he’d neglected to mention that it’d feel like I was peeing hot lava.

Then the machine did its spinny blinky thing and Was wheeled back.

After a bit of waiting, an earnest-looking and overworked doctor came in to give me the news: my kidneys were fine. No problem at all. The problem, he said, was totally different: I had appendicitis. And, apparently, my morphology is as unorthodox as my ideology. My appendix is in entirely the wrong place; the end of my large intestine points toward the front of my body and curves up, leaving my appendix pointing straight up at my liver like a defiant middle finger raised against one’s oppressors. (I’m not saying I have an oppressive liver, mind you; it’s a metaphor. Work with me here.) 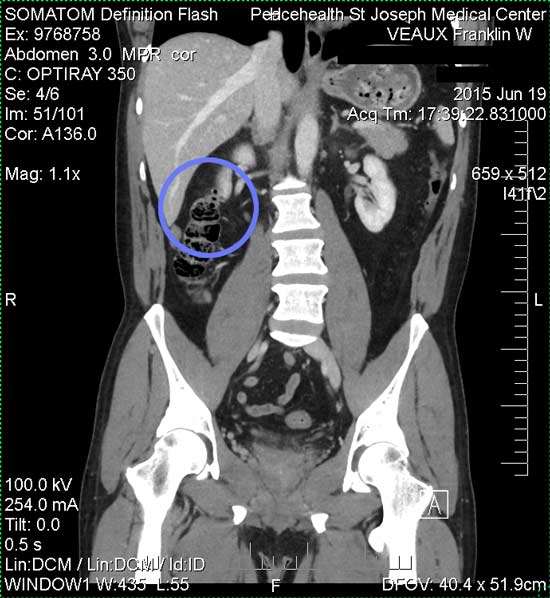 He told me the Three Wise Men (the doctor, the radiologist, and the surgeon) had consulted, and my appendix was right on the threshold of the point where they would normally opt to remove it, but after some deliberation they’d made the decision not to. He gave me a CD of the CAT scan (complete with autorun.inf file–seriously, has anyone in the entire world not got the memo on why autorun is a terrible fucking idea?) and told me to follow up with my doctor, who should figure out what to do with me.

So the problem is still ongoing: I wake up in the morning with pain that dissolves at the touch of ibuprofen, even though it’s intractable in the face of rather more potent painkillers, and go about the day.

Apparently, my insurance only covers out-of-state medical care if it’s an “emergency.” I’m not sure if “appendicitis that’s right on the fuzzy border of requiring surgical intervention, so we’re going to pack you up and send you home” is an “emergency” or not. A part of me is still holding my breath wondering if I’m about to be hit with a huge hospital bill for all of this.

But hey, no kidney tumor! That bit was a huge relief; we (my sweeties and I) were, I think, more worried about that than we’d realized at the time this was all happening.

14 thoughts on “In which Franklin has a weird appendix”