Before I go too much further into the tale of our adventures in the savage, icy badlands of Canada, there is a small detail which I feel I should clarify.

The cities in Canada are not literally built in the clouds.

There is a common belief that they are; tales of Canada’s sprawling cloud-cities permeate the folklore of nearly every industrialized nation. These tales, like many legends, have some small basis in fact. Seen from a distance, the grand cities of the Canadian steppes do appear to be floating on clouds.

We learned during our trip why this is. The cities of Canada are divided into two parts: the upper portion, with glittering skyscrapers and shopping malls and small outdoor cafes and little sushi places tucked away into business districts, much like you might find in any other city in any other place.

Beneath these parts of the cities, down in the earth where it is perpetually dark, lie the subterranean hearts of Canada’s civilization, where the Morlocks run the strange and ancient machinery essential to the places above.

These dark and mysterious caverns, the foundations of Canada’s cities, emit vast quantities of steam from the enormous, arcane machinery that supplies the parts above with water and electricity and powers the defensive grid. When you combine this with the fact that Canadian cities are almost always built atop natural hills or elevations, in order to provide better protection from Kurgan attack, it becomes easy to see how the casual observer, weary and snowblind, might believe the cities are actually floating on clouds. You can’t actually build a city on clouds in a literal sense; clouds are made of water vapor, a transient and altogether unsuitable foundation for heavy construction of any sort.

zaiah and I found ourselves deep beneath the city, in the Morlock’s territory, as we attempted to leave Canada Place and head back ’round toward the scenic parts of town.

Canada Place, as it turns out, is the main connection between the two Vancouvers, the one that glitters in the sun and the perpetually dark subterranean place of mystery and nightmare. We followed a path behind the building, which descended sharply and then widened into a broad street leading down into the heart of darkness.

Here you can see some of the vast pillars supporting the city, and the eerie red glow of the vast furnaces that supply the ancient machinery with steam. I fear this photograph fails to convey the oppressive nature of this strange place, gentle readers, as I was forced to use a very long exposure in order to record any trace of the details of the place, and thus it appears much brighter than it actually is.

We walked for about half a mile, along the wide passageway where huge trucks carrying coal and other raw materials thundered by. Giant turbines in the ceiling, which I was unable to capture on film, sat poised in readiness to fill the tunnel with cleansing flame should any unauthorized persons dare to venture down this far. As we walked, seeking any doorway or narrow access shaft that might return us to the sunlight and fresh air above, our every step was haunted by the fear of a clanking metal security machine stepping in front of us to challenge us with “Identification, Citizen!” In such an eventuality, we knew we would have little choice but to aim for the eyestalk and run.

Finally, after much searching, we found an accessway that, with many twists and turns of narrow steps, brought us back to the world of light. We were fortunate that the shaft we’d stumbled upon led directly into a construction site; it appeared to be long forgotten, reopened only accidentally and therefore unguarded.

The construction crews paid us no attention. Hearts still pounding, we climbed up onto the sidewalk and tried our best to blend in with the throngs of afternoon businesspeople sipping their lattes. We hurried along the moment we were out of sight of the tunnel we’d climbed through and left the busy sidewalks, circling around behind the business district. There we passed by the fields where, many hundreds of years from now, after the machine uprising, when nothing remains of this city save for her enormous and barely-charted sewers, human beings will no longer be born, but grown. 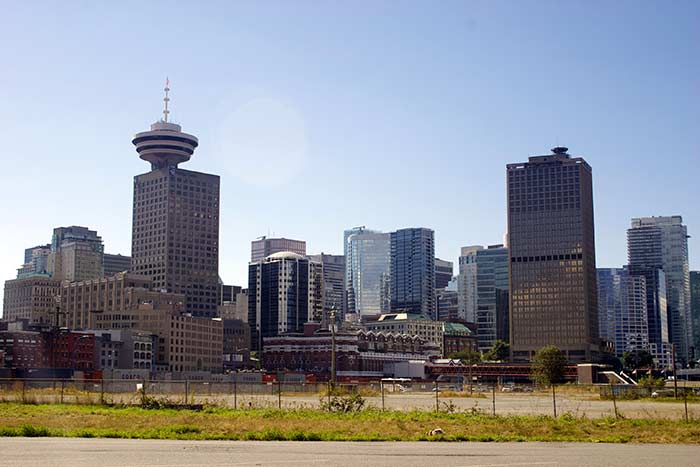 Eve, our tour guide in this strange and savage land, had suggested that we might find pleasant diversion in a district of town called Granville Island. So it came to pass that we made our offerings of bus fare and blood to a Kurgan driving his bus in that direction, and soon found ourselves walking in a pleasant breeze along the docks that ring the island.

We arrived at exactly the right time of year, as it turned out.

The Royal Canadian Navy was hosting its annual fund-raising, during which citizens are permitted to rent some of Her Majesty’s naval fleet for private excursions in the glittering water surrounding the island. As we walked along the dock, zaiah pointed out this vessel, the Limited Offensive Unit Probably a Bad Idea. 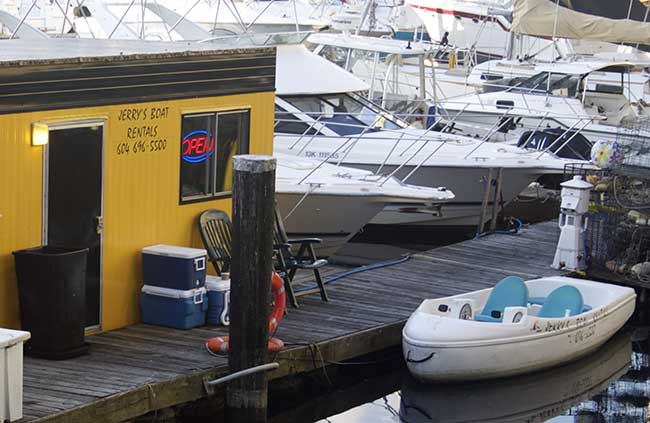 This vessel, equipped with the latest Man-Powered Rotary Reciprocating Dual Thruster Units, looked to us to be a fine way to explore Canada’s territorial waterways, so we resolved to rent it at once.

We negotiated an exchange of currency with a man wearing an “Obey” T-shirt, and set off.

The second thing we noticed as we paddled furiously away from the dock was the strange piles of rock carefully erected along the stony shore, offerings to the temperamental denizens of the deep waters, who are loathe to grant safe passage along her surface without these ritual tokens of submission.

At this point, I must pause to reveal that we were on that day the source, no doubt, of many interesting stories the Vancouverites exchanged with one another. I don’t know if it was the fact that we were both out in deep water paddling our small craft like mad, or the fact that your humble scribe was once again wearing bunny ears, but we were for whatever reason the source of much waving and pointing, and many shouted words drown out by the constant thrashing of our pedal-powered propellers.

So agitated by our unlikely presence did the Vancouver citizens become that another naval vessel, the Rapid Offensive Unit Unconventional Use of Weapons, was quickly dispatched to check us out.

Upon determining that we were an unarmed American woman accompanied by a man in bunny ears paddling our way around the False Creek sound and therefore unlikely to pose a threat to the safety and security of Her Majesty’s State, we were left to continue our journey in peace, though the continued reactions of Her Majesty’s subjects reminded us that there would be many a story around cozy campfires that night that started with “Hey, you aren’t going to believe what I saw this afternoon!”

We made our slow way beneath one of two bridges that span False Creek. This bridge, erected during the famous Art Deco era in Canada’s dim past, still bears the reminder of an ancient part of Canada’s history, now nearly forgotten by the youth of today.

Time was when balconies like the one you see here could be found on every bridge in Canada’s western half. According to the history books, when the Canadian government negotiated its treaty with the bridge-trolls that inhabited this part of the continent, these balconies were provided as a service to the trolls. Each morning, as the sun came up, the trolls would ascend to these balconies to announce the tolls for crossing the bridge that day, their low, guttural cries of “One copper! One copper!” or “Three copper! Three copper!” informing the tradesman what it would cost to do business on the other side of the bridge.

The trolls are long extinct now, disease and destruction of their natural habitat having been too much for them to adapt to. Architects today still sometimes include these balconies when they design modern bridges, though they do so only for tradition’s sake, without fully understanding why. 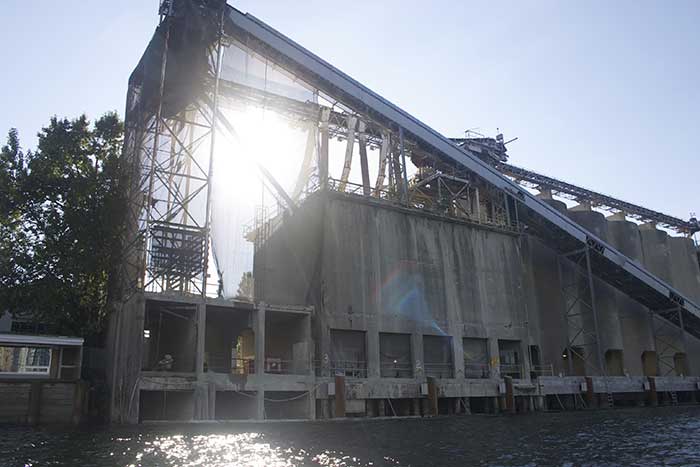 Once, Canada’s athletic elite gathered here to compete for the honor of leading the front lines in the regular campaigns against the Kurgan raiders. Today, it is used as a storage depot for concrete, making it, on the whole, rather more successful than the edifice that sits crumbling to ruin in Tallinn.

We saw this graffiti painted on the side of the structure. 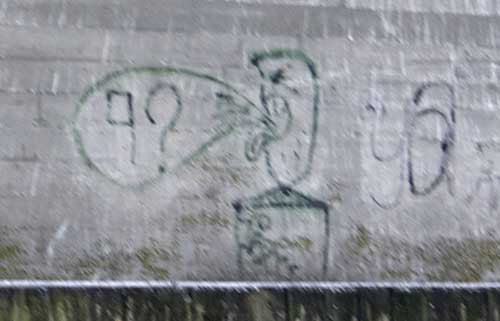 I must confess, Gentle Readers, that though my knowledge of Canada and her ways has been vastly expanded by our travels there, I have absolutely no idea what it means.