I’m still in the process of writing about my experiences with my Android phone, which will see at least two more sections (on the OS itself and on T-Mobile). The short version is I started with an iPhone, got rid of it for a 4G Android phone, decided that Android just doesn’t have it going on, and am switching back to the iPhone. 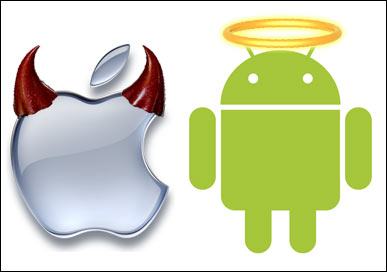 Now, one thing I’ve seen repeated many times since I’ve started talking here and elsewhere about my Android experiences is a common refrain: It’s not about the phone. It’s not about the operating system, or user experience, or call quality, or ease of use. An iPhone is a bad choice because Apple is an evil company.

With no disrespect intended for any of the dozen or so people who’ve said this to me: I find that to be a remarkably silly thing to say, but not for the reasons you might expect. I’ll get back to that in a minute.

First, before I get into that, let me start by destroying a childhood myth that we all learn in school.

When you make a product for sale, you do not determine the price of your product in the marketplace by taking the total cost of making it, adding some percentage to the cost of making it that represents your profit, and then selling it at that price.

An astonishing number of people seem to believe that this is how the price of goods is arrived at, and I am constantly surprised by how many folks believe it’s true. That isn’t the way it works at all.

“But Franklin!” I hear you cry. “What about competition? If I can get my cell phone or my ice cream from many different places, they will compete with each other on price until they have arrived at the lowest profit margin they can accept!”

Which is true, in the same world where unicorns cavort with dragon whelps over fields of cotton candy.

It also doesn’t account for the fact that supply is not always responsive to demand, for reasons that may range from capitalization costs to the fact that low availability can create that air of increased desirability I just mentioned.

Even supposedly “commodity” goods like oil and wheat are not priced according to the strict laws of supply and demand; things like futures and derivatives can change their price even when supply remains exactly the same. (If there is a sudden increase in trading for oil futures, for instance, the price of oil may rise even though the production of oil is completely unchanged and the demand for oil hasn’t budged one bit.)

So when people say things like “You’re stupid to buy an iPhone; if you get a high-end model, you’re paying $100 for $20 worth of additional flash memory,” they’re speaking from a profound ignorance of how any market system works. Sorry, Mr. Savvy Consumer, but you do that same sort of thing all the time, when you buy anything from tennis shoes to lumber.

So back to Apple’s supposed “evil.”

Apple is an evil company because every successful multinational corporation is evil.

They have to be. The laws governing and regulating corporations pretty much guarantee that any publicly-traded corporation must be sociopathic in nature. Any company, large or small, doesn’t succeed by leaving money on the table if it doesn’t have to; public corporations are legally obligated to seek maximum return for their shareholders, by whatever means are available to them. A corporation that has the opportunity to increase revenue or lower costs and fails to do so can be sued by its shareholders.

Let’s look at Google, the company whose motto is “Don’t Be Evil.” They make an operating system that is touted as being “open,” that is supposedly “open source,” and that anyone can use to make a smartphone, right?

Right. And those unicorns in cotton candy land just love it.

The reality is rather different; Android is not really “open” in any meaningful sense of the word, and Google is as big a bully as Apple, but less public about it. Google, for example, recently forced Acer to cancel a smartphone built around a rival operating system, threatening to cut Acer off from source code and revoking Acer’s right to use Android if it didn’t comply.

You know how anyone is free to download and build the Android source code? Well, err, that applies only to older versions, and even then only to some parts of the Android code base, excluding Google’s apps that run atop it. You know how anyone can use Android on their mobile phone? Well, err, the name “Android” is trademarked, so you have to license the use fo the name from Google…and how many consumers going to buy an Android phone that’s advertised as running an “Android-like operating system”?

That gives Google considerable leverage. So much that they can tell a hardware maker “We demand you cancel your phone that uses a rival operating system” and the handset maker will comply so fast that journalists will still show up for the product launch and end up milling around an empty hall.

Yes, Apple is an evil company. Google is an evil company. Microsoft is a company of such breathtakingly creative evil that even the Department of Justice is effectively powerless to reign it in, no matter how egregiously it has broken the law. If you find yourself with warm, fuzzy feelings about any globocorp, it is only because that globocorp has paid good PR money to program you with those feelings. To believe anything else is naivety in the face of overwhelming evidence.

Those underpaid workers making iPads in Foxconn factories? They’re making gizmos for Dell and Cisco and Microsoft and HP and Motorola and Nokia and Samsung and Intel, too…and under working conditions that the folks making sneakers for Nike would give their right arm to enjoy.

Of course, not all evil is created equal. The evil of Google and Apple might reach farther than the evil of Nike, but the evil of Nike is probably a lot more serious for those on the pointy end of it. As evil as Nike is, it’s a whole lot less evil than the Wall Street companies that crashed the economy (and then blamed the wreckage on “poor people buying homes that were too expensive”), or the company you likely bank with if you use a large bank.

Me? I use a small, local credit union. And I’m still buying an iPhone.