I’ve been a part of the polyamory community for a very long time. In that time, I’ve seen a lot of folks talk about how they feel when their wives or husbands or lovers or significant others take on a new partner.

Naturally, a lot of people feel fear and angst when it happens for the first time. We’re brought up to believe in all sorts of notions like Soulmates and The One and Happily Ever After, so of course when someone we love expresses an interest in someone else, it’s a bit scary.

On top of that, a lot of folks feel jealousy, especially early on in a new relationship; the new lover can be seen as competition, the Other, someone dangerous and scary.

But after a while most of us find that our lovers have new partners and, even if there are some rough bits early on, it’s not The End of Everything. Our fears don’t come true; our lovers don’t leave us as soon as they realize how laughably inferior we are in every imaginable way to The New Shiny, and life is still happy.

So folks who’ve been around the proverbial block a few times generally will say things like “Naah, it’s not that big a deal when my lover meets someone new. As long as it doesn’t threaten our relationship, I’m totally OK with that.”

And that’s not necessarily a bad attitude to have. In fact, I think being relaxed about the prospect of a new relationship is, generally speaking, a very good thing in poly relationships. I’ve talked before about how when we’re afraid or insecure about something, we can often make choices that make it more likely that the thing we’re afraid of will happen; if we’re afraid our partners will leave us for a new person, we might emotionally push our partners away, or try to impose unreasonable controls on their behavior, or just generally act out in ways that make us disagreeable to live with, and then yes, the new person starts to look pretty appealing in comparison.

But there’s an elephant lurking in the room, one I almost never hear anyone in the poly community talking about. And that is: Yes, a new relationship really is potentially a threat to the existing relationship, no matter how poly-skilled the folks involved may be. 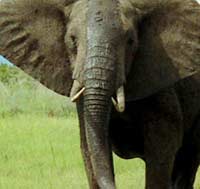 So there it is, the elephant in the room. Put simply: A new connection, a new relationship, is a threat to an existing relationship…in the sense that any significant change in any relationship is potentially a threat.

Marriage counsellors and therapists have known this for a long time.

A new child often threatens a relationship. Loss of a child, doubly so, or more…many, many otherwise healthy, happy relationships between genuinely loving couples can be destroyed by grief or loss. A change in financial status is a threat to a relationship; I’ve heard it claimed that more people break up because of financial stress than for any other single reason. And, perhaps paradoxically, it works both ways; couples will often break up after a significant positive change in their finances, too.

An illness or infirmary is a threat to a relationship. Many people find it difficult to cope with stressors like long-term illness or debilitating injury.

Even something as seemingly simple and straightforward as buying a house can be a threat to a relationship. I mean, hell, I’ve seen people break up over pets!

The point is, any change whatsoever to the structure of a relationship is a threat to that relationship, whether we acknowledge it or not. Taking a new job in a distant city and deciding to have a child are both significant threats to a relationship, but you will rarely hear people say “Okay, I guess we can move to Denver, but only if it doesn’t put what we have at risk” or “Okay, we can try for a baby, but only as long as it doesn’t threaten us.” We don’t think of these things as threatening, even though a glance at the statistics shows that they are.

We do, however, think of new partners as threatening, because they go right to the core of what society tells us is Bad And Scary. So we will say “Sure, you can pursue new relationships, as long as they aren’t a threat to our existing relationship”…but I don’t think that’s realistic. Of COURSE they are! They are a significant change in the emotional focus, composition, time, and attention. That makes them a threat to the existing relationship!

So there it is. I said it. I don’t think it’s realistic to say “I don’t mind new relationships as long as they’re not a threat.”

However, that doesn’t mean that I advise not doing it. Far from it! There are many things which we do all the time–have kids, buy a house together, take a promotion at work, start a new hobby–that potentially introduce stressors into our lives that could threaten our relationships, but that we choose to do anyway because they’re worth doing.

In practice, there are a lot of things that I can do that will mitigate that stressor. One of those is to adopt a policy of resilience–to know that even if things change in my relationship, I will be OK. Another is to advocate for my needs; if I need something from my partner that I’m not getting, but I don’t ask for it, clearly and directly, then it’s not my partner’s fault if I don’t have it. Still another is transparency–always sharing with my partner, even things that might be hard to talk about or that I’m afraid my partner might not want to hear.

44 thoughts on “Polyamory and the Elephant in the Room”