After an afternoon of wandering amongst statues of mostly-naked men spurting great gouts of spray everywhere, we left Peterhof by hydrofoil to visit yet another palace, this one belonging to Catherine the Great.

Well, kind of, anyway. Story was, if I got it from our tour guide of the polysyllabic name correctly, that Peter the Great’s daughter Anna decided, when he died and she took over as monomaniacal despot of unlimited power, that his palace was a total dump. She resolved not to have to live in such a trash heap of a place, and commissioned one of her own, this time with knobs that went to eleven. Or twelve.

So she got an architect, explained how she wanted something a lot less cramped and frumpy than Peter’s old digs, and set him loose. She was so pleased with the result that she made him Court Architect and promoted him to four-star general or something. (Quite how a person’s skill at making over-the-top buildings that’d cause the Pope to blush qualifies said person to be a military commander is a detail that escapes your humble scribe.)

So apparently a year later, Anna dies, Catherine takes over the country in a royal coup, and the poor luckless bastard who’d just been promoted into the ranks of the aristocracy ends up getting banished or executed or something, simply by virtue of being a dude that Anna liked. That’s the way it works with royalty–what one hand giveth, the other hand taketh away, and then shoots you in the head or some damn thing.

The palace is now the Hermitage, one of the world’s largest museums. It looks like this. (I didn’t take this picture, I snarfed it from their Web site. I couldn’t get far enough away to get a decent shot.)

Yeah, it’s like that. Catherine, a few thousand of her closest friends, and a few more thousand people who weren’t actually friends with any of them but were reasonably good cooks or seamstresses or something and also had the misfortune to be born into the servant class, which is something they should’ve thought about when they were choosing parents, actually lived here.

The entrance features the same half-dressed, buff sea-god motif that Peter was so fond of. 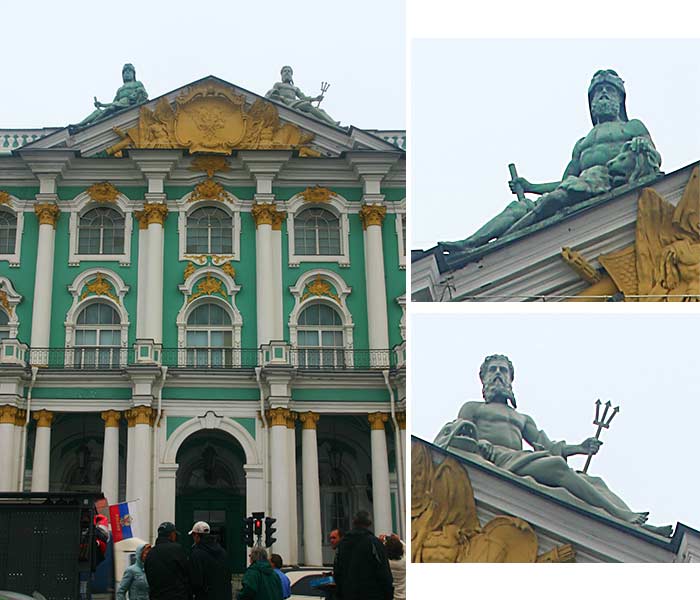 I imagine the conversation between these two goes something like this:

While we were crossing the street toward the entrance, a Russian street vendor selling T-shirts out of the back of his car approached me and offered me a shirt for ten American dollars. When I saw the shirt, I had to get one. 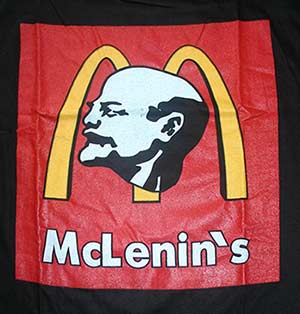 I got it mostly because I sell a “KGB” T-shirt from my online T-shirt shop, so the irony of buying a “McLenin” T-shirt from a street vendor in the former Soviet Union was too good to pass up.

And the more I thought about it, the more perfect it was. A Russian street vendor selling souvenirs to tourists in American dollars, featuring a blatant trademark infringement that’s also a commentary on the fall of the Soviet Union? It’s also, as my sister pointed out, the thinnest T-shirt I’ve ever seen, so all that and shoddy quality too. Now that there is really everything you need to know about the fucked-up geopolitics of the post-Soviet world, it is.

Our transaction complete, the diminutive Russian guide of the brain-shattering name ushered us inside. Once in the foyer, the very first thing we saw was a cat curled up on one of the benches flanking the door. 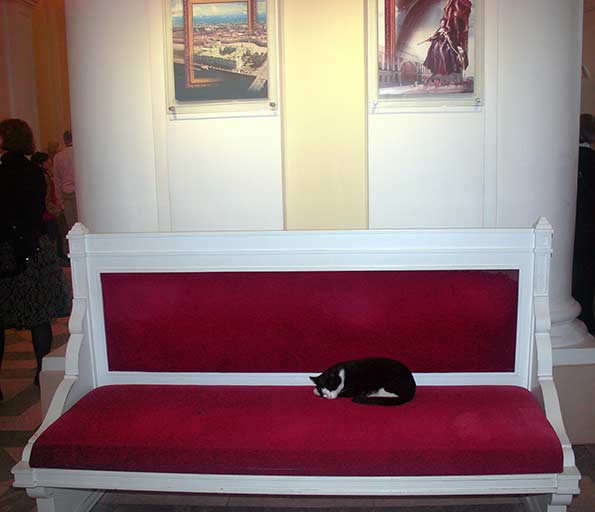 It was quite a placid cat, utterly unconcerned with the throngs of people all around it.

Our tour guide explained that the Hermitage keeps about five or six cats on the premises as a defense against rodents, since one of the biggest challenges faced by museum curators is rodents and insects that have developed a taste for fine artwork.

I had to pet the cat (over, it must be said, the objections of my father, who quite dislikes cats) before we could venture any farther into the Hermitage’s hallowed halls.

There is a story that when the Bolsheviks overthrew the Russian Tsars, their first impulse was to burn all the palaces to the ground, but they opted to keep them as museums instead–with a propagandistic eye toward inflaming the working classes with fury at the tsars’ decadent lifestyles. The Bolsheviks themselves did plenty to inflame the working classes with fury at them, so I’m not quite sure how that worked out.

Being a monomaniacal Russian despot is a little bit like being Texas. Everything is bigger, and you execute a lot of people. For example, take the stairway leading up from the foyer in the Hermitage. You know how people always put little knobs or carved balls or something on the ends of the banisters, so that actors in Chevy Chase movies can at some point slide down the banister and catch their testicles on them? Yeah, crank those babies up to 12 and you end up with something like this: 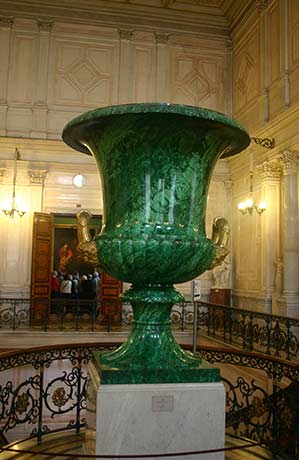 It’s probably a good thing Peter the Great was dead by the time Catherine rolled into power, else his punishment flask might’ve looked like that. I’m not really sure what one would do with that thing, short of execution by vodka; the bigness of its size diminishes its utility as a thing to put stuff in considerably. But it certainly is…big.

The Hermitage itself is big. Really, really big. Our guide claims, with a good degree of credibility, that if one were to tour its entire exhibit space and spend one minute looking at each item in their collection, one would be there for about seven years and change. We were there on the one-hour plan, which meant either traveling through the museum at an average speed of Mach 2.4, or seeing only about one-onehundedth of one percent of their collection. Lacking adequate heat shielding and dorsal stabilization for the former, we opted for the latter.

The hallways throughout the Hermitage look something like this. 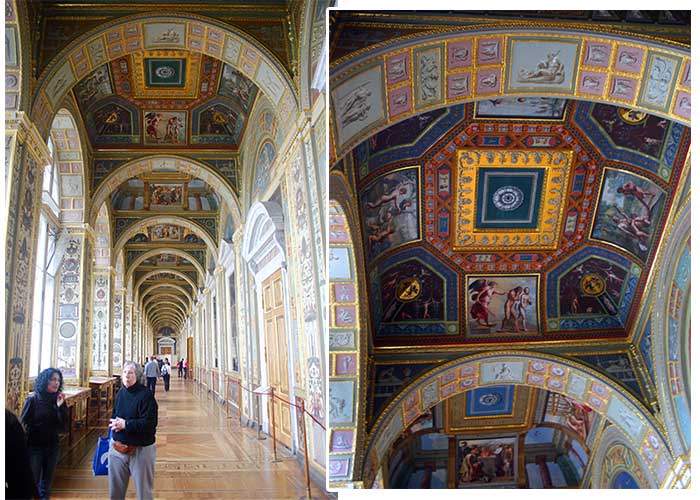 Every square inch of every surface is covered in paintings and frescoes and reliefs and tilework. The yellow stuff is mostly gold. The overall effect is jaw-dropping, in a sort of over-the-top, confused mishmash of priceless artwork that looks like it was just kind of haphazardly thrown into the air like Ping-Pong balls shot at high velocity from a liquid-nitrogen-powered cannon. (Which I saw a few nights ago, in fact, and it took down part of the ceiling of the building we were in, and the cops got involved, and…but I digress.)

It all looks like this. The whole. Fucking. Place.

My sister, after we’d been walking around with our jaws scraping on the ground for a bit, made a snarky comment along the lines of “Isn’t it amazing what you can do by climbing over the backs of the underclass?” Now, my sister, as I may have mentioned before, is a lawyer, specifically a lawyer who works in the field of contract law. And she said this without apparent irony, as she took advantage of some of her ample leisure time as a privileged First World Westerner to visit a less-privileged country while on vacation from the job at which she earns probably three or four times the median US income and, I don’t know, like eighty-seven million times the average Third World salary or something.

But, honestly, she’s right. I was thinking something similar right before she said it.

I understand the urge to be surrounded by beauty. I get that the Russian leaders were incredibly privileged monomaniacal despots who owed their incredible standard of living to the tyranny and atrocity with which they ruled, I really, really do. I also get that it doesn’t have to be that way. Just a single dollar collected over a single year from each person in the US–an amount of money well within the means of anybody, including the homeless–would probably be sufficient to endow a place of beauty on the scale of the Hermitage, and I think creating beauty is something that has value.

Architect Frank Lloyd Wright wrote that art for art’s sake is a philosophy of the well-fed. I get where he was coming from, but I’m not as cynical. Maslow’s hierarchy of needs would seem to suggest that art is a fleeting and ephemeral thing, attainable (or even relevant) only where our more base needs are being met, but honestly, Maslow can blow me. Were that true, how then did Der Kaiser von Atlantis, an opera written by a Jewish composer being held at the Nazi Terezin concentration camp, come to be? The idea that art is only meaningful to people who are otherwise well-fed and content is something I find not only false, but repugnant. Art, done properly, illuminates every part of the human condition, even–perhaps especially–the bits that are most unpleasant and sordid.

So, yes, I get that the over-the-top exuberance of the palace that is now the Hermitage was built on a foundation of human suffering. I also get that it, more than any of the military misadventure or matters of state that occupied the Russian treasury during the reign of Catherine, is a lasting testament to the human spirit. Had this particular palace never been built, I daresay the suffering of the Russian serf would have been not one whit lessened. As long as we are stuck with the idea of monomaniacal tyrants willing to commit atrocity–and, Russia’s history being what it is, I suspect that was inevitable–there are far worse things they could have done, and did do, than be a patron of the arts.

Though that won’t, I daresay, prevent me from getting snarky about some of that art in my next installment.

34 thoughts on “Adventures in Europe, Chapter 8: I thought hermits were solitary!”