With all the noodling about we did at one of Peter the Great’s many winter palaces, I realized that I knew him half as well as I should like, and I disliked him less than half as well as he deserved. Monomaniacal thirst for unlimited power aside, he was actually quite a fun-loving guy, in a sort of bloodthirsty, “I’m a raving psycho who does pretty much whatever I want to do all the time” kind of way.

Our tour guide with the ear-bending name told us the story of the Punishment Flask he kept handy at all state dinners, for example. We got to get a look at it; a large, ornate crystal decanter which Peter kept filled with vodka. Apparently, or so the story goes, the last person to arrive at any state dinner, be it one of his generals or the visiting King of Prussia, would be made to drink all the vodka in the flask at one gulp.

So, yeah. Take a frat boy and give him limitless resources, and you get Peter the Great.

There is a statue of the man in the gardens of the first Winter Palace we visited, and I must say, I was quite astonished when I saw it. 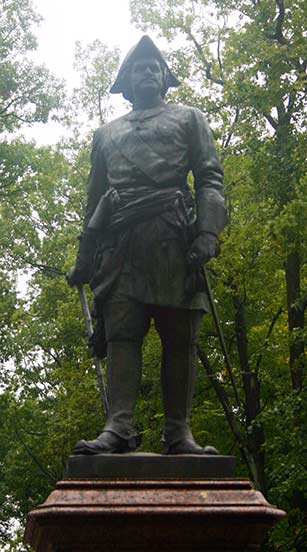 Those of you who have a military background and are reading this will no doubt spot one small but nevertheless surprising detail on this statue: Peter the Great has a hat that sucks.

Now, given the Law of Military Hats I talked about earlier, you would expect this to mean that Peter’s military adventures would be more suitable as subject matter for Looney Tunes cartoons than for history books.

And you’d partly be right. His early experiments in military adventurism against the Ottoman Empire mostly resulted in him getting his spleen handed to him on the end of a fork. A finely-wrought, richly decorated fork, adorned with elaborate and intricate calligraphy reading, in Turkish, “Suck on that, you silly-hatted bastard!”

But Peter discovered a loophole in the Law of Military Hats, which would forever rewrite the history of the world and which would hold out a beacon of hope for other similarly unfortunately-hatted monomaniacal dictators for decades after his death.

When he returned, minus his spleen, from his defeat at the hands of the Ottomans, he set about building a huge navy, the better to sail against the Swedes, who at the time controlled the Baltic Sea and all the trade therein, largely on the basis of shooting at anyone sailing across it who they didn’t like.

And it worked. As it turns out, a silly hat plus a huge naval armada beats a scary hat. Mathematically, it looks something like this:

Armed with this secret knowledge, Peter and his huge naval armada sailed into battle against the Swedes, well-equipped to hand those Swedish bastards their spleens on forks–a strategy refined by the Ottomans but perfected by Peter with the invention of the three-tined serving fork.

The ruler of Sweden at the time, Charles XII, refused to accept the notion that he could be de-spleened by a man with so silly a hat, and despite getting his ass kicked by Peter and his huge naval armada, kept on fighting until he himself was killed in battle. His people said “whoa, dude, we totally didn’t see that coming!” and conceded that Peter had in fact got the best of him, hat notwithstanding.

Once done, Peter turned his attention to matters of state, such as building great big gold statues of burly half-naked men with rippling muscles who gushed copious amounts of fluids from somewhere around their waists.

Peter the Great had problems.

We didn’t actually go inside the palace proper, or the palace improper either. Instead, we wandered around the grounds for a while, making snarky comments about Peter’s issues and marveling at the naked women with the strangely-shaped breasts, until our transportation arrived to take us back across the bay.

And what transportation it was! The heart of the eight-year-old that lives in my chest sang in joy when I realized we would be riding on…

Hydrofoils are cool. Take a normal boat, put it on skis, and when the boat starts going fast enough it lifts right up out of the water like some kind of ultra-cool science-fiction boat on motherfucking skis.

I was a bit perplexed, I will admit, by the drawing of the paddlewheel boat on the side of our hydrofoil. When you get right down to it, a paddlewheel boat is, technologically speaking, about as far as it’s possible to be from a hydrofoil while still being in the general class of “self-propelled things that float.” It’s a bit disconcerting, like stepping into an F-22 Raptor and finding a drawing of the Wright Brother’s plane on the instrumentation.

There are good reasons for hydrofoils, and I’m honestly a bit perplexed we don’t use them more often. When you are in a thing that floats, whatever it might be, your success at moving the things that floats through the stuff it’s floating in depends on two factors: the stickiness of what you’re floating in, and its density.

Hydrofoils solve that problem by lifting the boat right up out of the water, so the boat displaces very little of it and there’s almost nothing that you need to shove out of your way. Because of this, they’re fast. However, unlike racing boats, which just naturally have a very shallow draft, they’re also stable. The skis-and-stilts arrangement prevents the boat from ending up head over teakettles whenever they encounter the slightest ripple, so they work well in calm seas or in rough seas. And did I mention they’re fast?

Anyway, back to the story.

We sat down and pulled away, and the whole time I was thinking “Wow, these things are supposed to be fast, this is going to be so much fun!” So it was with some disappointment that I noticed, as we left the dock, that we really didn’t seem to be moving with any alacrity at all.

I remember thinking, just before I turned to look out the window, something along the lines of “Well, maybe the captain’s going to wait ’til we get farther out into the bay before he opens it holy mother of God!” And that was the weirdest part of the ride.

In a normal boat, you see, when you’re going fast you feel it. The boat jerks and bounces and heaves itself up out of the water, and you can tell you’re hauling ass.

Being in a hydrofoil doesn’t feel at all like being in a normal boat. There’s little sensation of speed at all. You get none of the bump-and-fall of a more conventional boat; instead, it feels a bit like being in a large passenger jet that’s encountered some very, very mild turbulence, just enough to make your coffee move a bit in your cup. And this despite the fact that we were hauling ass like Captain Kirk chasing some half-dressed Orion slave girl with green skin.

Another hydrofoil came whipping by us at about warp nine jillion or so, and I barely had time to snap a pic as it flew by: 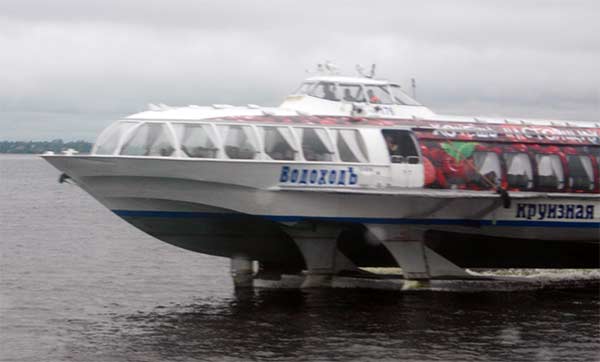 And one of the most utterly bizarre things about it all was that even when we shot by a tugboat faster than Dick Cheney chasing an accidentally dropped quarter, we left no wake at all.

The whole experience was inspiring in the way that I’ve never quite experienced before. I came away from the winter palace of Peterhof with a feeling that when I grow up, I want to be a monomaniacal dictator with an insatiable thirst for power, just so that I can have a hydrofoil of my own.

18 thoughts on “Adventures in Europe, Chapter 7: My hat, it has three corners…”