Art is a funny thing.

Whenever one applies the creativity of human intellect to the task of illuminating the human condition, one can reasonably expect to get some hits and some misses. And on top of that, what constitutes a “hit” or a “miss” is often a matter of who you ask. (I find both Picasso and Dali to be dreadfully boring and trite, for example, though I know there are a lot of folks who’d be appalled by that opinion.)

When Catherine the Great moved into the palace built by Anna, one of the first things she did was to start collecting works of art, so it’s perhaps inevitable that the palace eventually became a museum.

The collection at the Hermitage is mind-boggling, both in terms of its sheer scope and in terms of its diversity. It’s certainly reasonable to call much of the place “tacky,” and it’s the tacky bits I’m mostly talking about here, but it also has a lot of the things you’d expect from a world-class art collection anywhere–several Da Vinci sketches, a huge collection of both Renaissance and Impressionist paintings, and some bits of art that are just plain breathtaking. 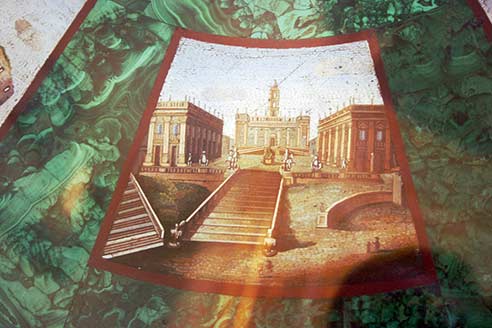 This is an incredibly crappy photo of one of the most interesting things I saw. The photo is so crappy that I considered not posting it at all, in fact. What you’re looking at is one small part of the top of a round table, divided into wedges with an alternating jade (edit: malachite?) and marble motif, which contained a number of scenes of ordinary street life. (This and some of the other photos you’re going to see are crappy in part because much of the artwork can not be photographed with a flash, as flash photography can damage the originals; I took this picture by hand-holding the camera above the surface and doing a two-second exposure.)

Now, it’s a beautiful table, which I can’t even begin to give justice to in this picture. But what’s most amazing about it is that the surface of the table isn’t painted. Every bit of the table, including what looks like a jade or malachite or marble background, is actually a tile mosaic–using tiles that are 1/200th of an inch square, and all hand-placed on glass. According to our tour guide of the unknowable name, a skilled artist could produce about one such work every five years. The combination of artistic skill and raw technique that goes into this kind of art is just amazing.

Some of the rest of the Hermitage’s collection, or perhaps I should say some of the rest of the tiny sliver of the Hermitage’s collection that occupied the two floors of the one small part of the one building we saw, is also amazing, in an entirely different way. Parts of the collection push the line between “artistic” and “tacky;” other parts of the collection nuke the line into glass by heavy orbital bombardment, then come back after the radiation level has dropped, plow it under with heavy construction equipment, and build a McDonald’s and a Thomas Kinkade gallery on the spot where the line once stood.

Take this table, for instance. 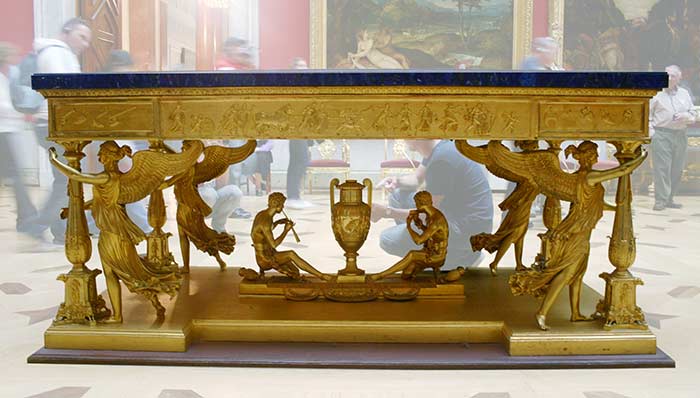 I’ve faded out the background to help you get the full impact of this object, God forgive me. Yes, that’s real gold.

I want to do…things on this table. Obscene things. To a woman who’s tied to it. I won’t disturb you with the details. Suffice it to say the things I want to do are illegal in twenty-two states and the District of Columbia, and probably contravene parts of the Geneva Convention.

The table is in one of the central halls of the center part of the frontmost building of the palace. The hallway is generously illuminated by enormous arched skylights. In the classic over-the-top style of the time, the edges of the skylights and every inch of the trim along the top of the wall are generously decorated. 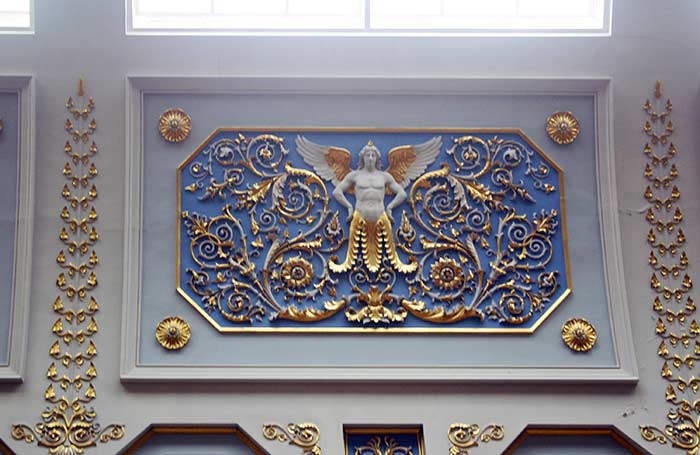 The paroxysms of artistic excess didn’t extend just to the decoration of the walls, but sometimes permeated into the very fabric of the architecture itself, kind of how tomato juice gets into clothes and you can’t seem to get it out. This is one of the halls where Catherine would address her subjects and, I don’t know, issue royal decrees or do whatever the hell it is that absolute monarchs with unquenchable lust for power do. 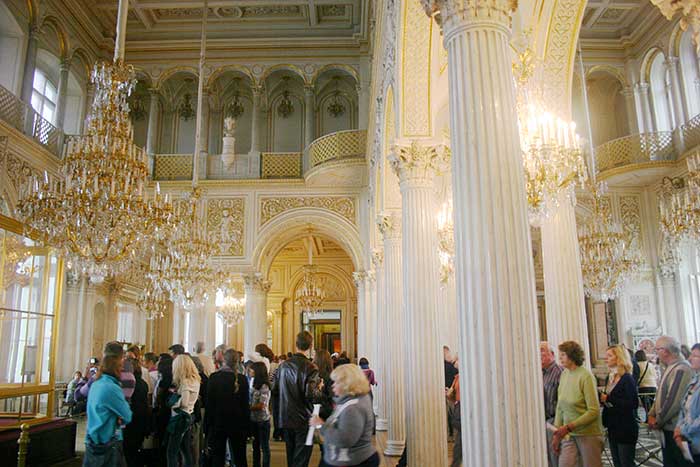 I post this picture mainly because I really, really dig the design of this stairway. 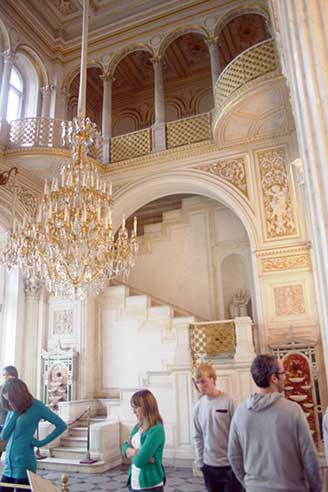 Some day, when I am wealthy beyond the wildest dreams of avarice, I will have a house. In that house will be a balcony. Rising up to that balcony will be a staircase that’s designed just like this.

Not too far from this hall are the royal throne rooms.

You see what I did there? I used the plural. You might infer from this that there are more than one throne room, and in fact you’d be exactly right. This is the monarchy that’s just like Texas, remember? All things to excess, and they execute a lot of people. This building has two throne rooms. I don’t know if there are additional throne rooms in the rest of the palace complex; we only hit just this one building.

The Royal Architect may have designed the entire palace with knobs that go to eleven, but he saved the most excited expressions of his particular art for the throne rooms, which take “over the top” and go just a little bit beyond. 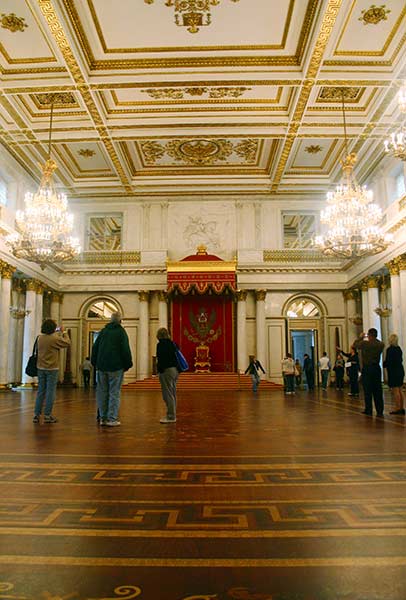 This is the larger of the two. Yes, the ceiling is decorated in gold. It’s a motif that by this point had actually become somewhat tiresome. The floor is done in fifty-three bajillion different kinds of exotic hardwoods, each bit of wood coming no doubt from a magical faraway forest where each tree was felled by the hand of a virginal maiden who…never mind. Suffice to say that this throne room is the reason unicorns became extinct; the entire Enchanted Forest was felled just to make this floor. When you walk across it, you can still hear the sighs of the souls of the dryads forever pressed into its foundation. Catherine liked the sighs of the souls of the dryads. They lulled her to sleep at night.

The smaller, cozier throne room, where Catherine could sit before a select, private audience of only five or six thousand of her subjects, looks like this: 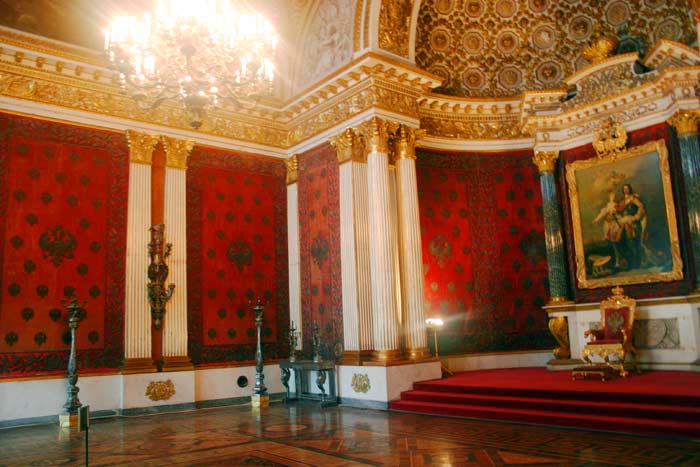 Here, the ceiling is lower, and the rich fabric coverings on the walls helps to give a more softer, more intimate character to the sighs of the tortured dryads as you walk upon the magical woods forever trapping them here in this plane of existence. The painting above the throne, whose frame bears the shape of a crown which echoes the crown wrought into the back of the throne itself, suggests to you that the person who’s sitting there is a monarch. You know, just in case you were unclear on that point.

On the way out of the throne room to head upstairs, we passed this thing. 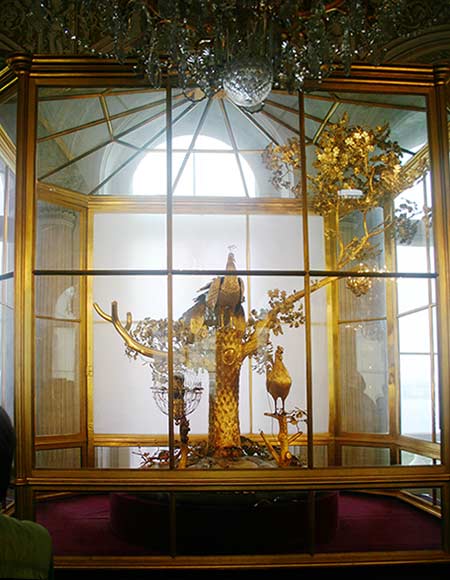 Again, it’s a crappy picture, but it’s basically a gigantic statue of a pheasant in a tree, done (of course) in gold, and enclosed in a huge glass case.

Pause for a moment, and let the horror sink in. This huge mechanical monstrosity is…a cuckoo clock. Periodically, when it was working, it would move and squawk and make all manner of noise.

Now, I am something of a skeptic, it must be said, of the notion of capital punishment. I don’t think its value as a deterrent has ever been satisfactorily demonstrated, for example, and I have certain misgivings about the arbitrary and capricious manner in which it is handed out, particularly by monarchs of unlimited power.

In this case, however, its utility as a means of making sure the person responsible for this thing never again commits so grave a sin against humanity is above reproach.