The day after it departed, our enormous floating hotel and overpriced shopping mall cruise ship pulled into port in Stockholm, Sweden.

I say “pulled into port,” but the reality is closer to “crawled slowly into port with the gingerness of an 18-year-old virgin undressing a girl for the very first time, halfway expecting to find a bear trap underneath her bra strap.”

My parents decided to take one of the ship’s many shore excursion packages. We debated for a while which package to buy–the Stockholm Old Town Tour, the Stockholm Water Excursion, the Stockholm Syndrome Tour. I voted for the last one; everyone else who had been on it really seemed to like it. (One reviewer said “After taking this tour, I fell in love with Stockholm, but I don’t know why!”) My parents didn’t listen to me, though–they felt that if I wanted to be drugged, bound, and thrown into the back of a van, I could do that when we got to Russia.

We ended up doing the Old Town tour. Stockholm is splattered across several islands; Old Town is the central island, where past royalty built their palaces, plotted coups, and lost wars.

The bus disgorged us in front of the Storkyrkan, an ancient Protestant church right across the street from the royal palace.

Our tour guide was very, very enthusiastic about the Storkyrkan. You see, the Storkyrkan is the place where the Swedish crown princess had just got married. And the Swedish crown princess’s wedding was a very beautiful thing, you see, and the whole country was just absolutely delighted that Parliament had agreed after eight years of courtship to give her the go-ahead to marry her beloved personal trainer, you see, and when they got married in the church it was on TV, you see, and there were all these flowers, and…

Now, personally, she seemed just a little too enthusiastic about it all to me, like maybe she needed to adjust her Ritalin dosage a bit. I’m not suggesting that it wasn’t a gorgeous ceremony, mind, but frankly, getting that invested in someone else’s marriage seems more than a bit…weird to me. You see.

Of course, needing to have an act of Parliament in order to get hitched also seems a bit weird to me, so what do I know. Ah, those whacky countries with their whacky royalty!

Her enthusiasm for the Storkyrkan didn’t extend to actually taking us inside. We did, however, get to see this statue outside of it: 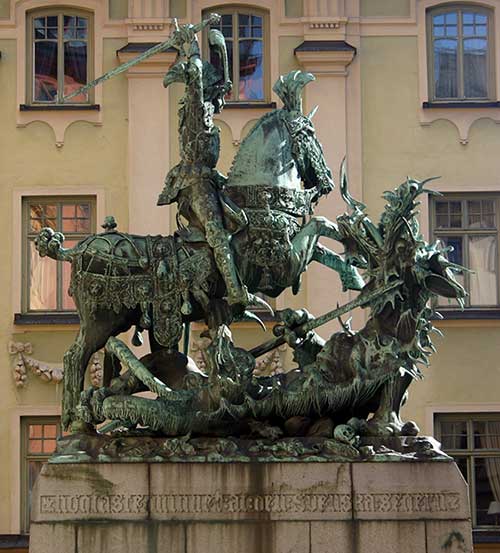 The statue celebrates the victory of St. George over the Dragon, where “St. George” was apparently some mercenary who came into Sweden to champion the causes of Truth, Justice, and Lutheranism, and the Dragon was the Catholic Church. It’s all very complicated, but apparently some dude rode into town and offered to help Sweden fight in some battle or other if they would in exchange agree to worship some invisible guy the way he wanted them to instead of the way some other dude wanted them to, and they said OK, and he did, and he won, and they all converted to his invisible-dude-worshipping ways, and they put up a statue filled with symbolic imagery, which they then spoiled by explaining it at great length to any tourist who will listen. Or something.

The statue is a stone’s throw from the Royal Palace itself. Not that I would recommend throwing stones at it, seeing as how it’s guarded at all times by an ever-rotating contingent of palace guards drawn from all branches of Sweden’s formidable military.

This guy was on duty when we passed through the gates: 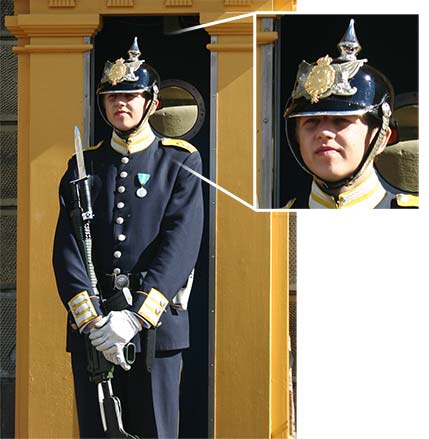 I know some of the folks who read my blog have a military background. You guys will recognize instantly that the formidable headgear this guy is wearing sends a clear and unmistakable message: this is a man with whom you should not fuck.

For those of you unversed in the military arts, almost the entire history of military endeavors comes down to hats. Throughout history, armies have poured vast resources into researching and developing the hat. The hat is how you can tell the power of an army. Armies with cool headgear almost invariably triumph over armies with less cool headgear. Spikes, buckles, shields, feather dusters, and all sorts of other accoutrements have been used throughout history to send clear messages to the opposition: Our hats are far more grandiose than yours. Prepare for annihilation.

The history of the West looks something like this: 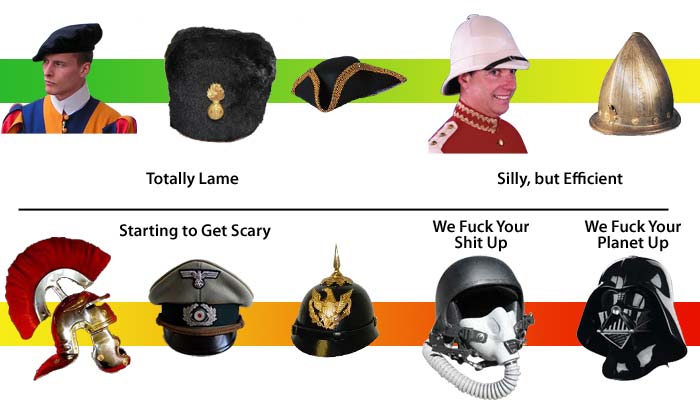 So it is clear, even to a casual observer, that this guard is someone you simply don’t mess with, unless you wish to dine upon your own spleen forthwith.

Now, about the Royal Palace.

I have no pictures of the inside of the Royal Palace. Photography is strictly forbidden within the Palace, for reasons of national security. I can’t tell you what I saw, but I can tell you that there is some serious, weapons-grade ostentation in there. The Royal Palace is the Swedish national stockpile of ostentation. How much? Well, the OUTSIDE of the Royal Palace has waterfalls built into every corner, and gold-plated engraving in the stone: 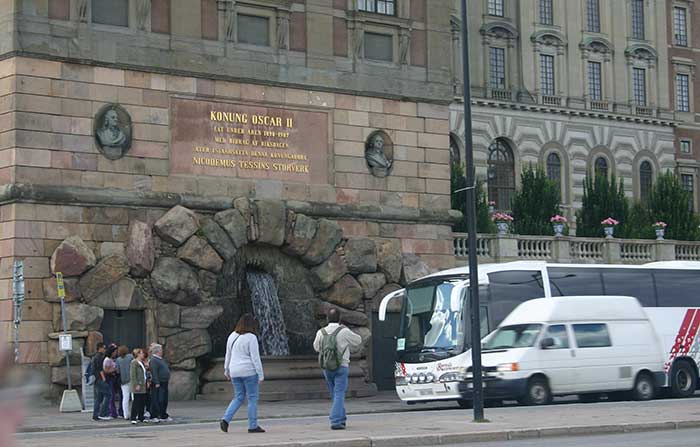 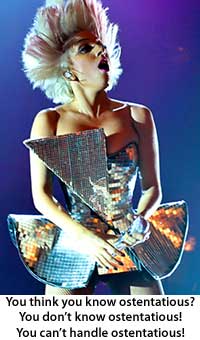 We’re talking about gold inlays in the doorjambs and frescoes on the ceilings. We’re talking about marble hand-quarried from the deepest forests of Brazil by nude young maidens between the ages of 18 and 24 (inclusive) who come from all-female tribes of bellydancers and who have never known the touch of a man. We’re talking about dining rooms that could swallow up a 747 and fart out half a dozen Piper Cubs. We’re talking about bedrooms where one could comfortably host a game of rugby, with enough room on the sidelines for three Roman orgies, a military procession, and the entire team of Budweiser Clydesdales.

Today, the Royal Palace is a museum. And one of the residences of the royal family. And the place where official ceremonies and receptions are held. And the site of the annual Nobel dinner. And the official meeting place of the heads of state. And a site for public lectures. And a ballroom. And state apartments for visiting dignitaries. And another museum. At the same time. And you thought Graceland was over the top.

The palace is divided into sections, with the western part representing the king and the eastern part representing the queen. The king and queen, each accompanied by the Royal Academy of Spelunkers, could wander for years in this place without ever once crossing paths–making it by far the most successful example in Western history of how the artifice of the royal architect is instrumental in maintaining harmony within the Royal Family and, so, within the nation.

The bill just for dusting the place comes, I’m told, to about two decimal places greater than the entire gross national product of half the world’s nations. This has led to a crisis within Sweden, as thousands of antiquities-dusters, fleeing the collapse of the Soviet Union, have swarmed across Sweden’s borders seeking jobs within the Royal Palace. The fiercely protective and politically connected Swedish Brotherhood of the Ancient Duster, Sweden’s trade union representing national dusters, wipers, washers, cleaners, and others, has used its considerable influence to generate a popular backlash against the foreigners with their cheap synthetic Chinese-made feather dusters. With billions of krona at stake, this chapter in Sweden’s turbulent political history is still being written.