So I was digging through a bunch of boxes in the closet last night, and I found a box with some “experimental” T-shirt designs that I never ended up marketing on my T-shirt site.

Since I’m in the process of closing down that site, i didn’t feel like adding these T-shirts to the site, particularly since some of them are quite literally one-of-a-kind (in the “I only created one of them” sense of the word). So, instead, I figured I’d offer them up to you, my LJ-reading friends.

Several of these shirts were the result of an experiment using reflectorized ink. This ink is very cool (but ultimately way, way, waaaay too expensive) that looks gray in normal ambient light, but changes color depending on the angle you view it from and glows a blazing white when you shine a light directly on it. The ink uses the same principle that things like reflectorized tape and reflectorized paint uses, and it stands up to washing, but it turned out to be just too damn expensive to make these shirts.

I found one “Identity Zero” shirt, size XL, that’s printed with reflectorized ink. I took several pics of it to try to convey what it looks like. The pics don’t really do it justice, but you can get some sense of how it looks flat gray under normal light and bright white under a beam of direct light (in this case, the camera flash):

I also found a gray “Goddess” shirt, size L, printed with the same ink. Depending on how it’s viewed, the logo on the front, which shows the three aspects of the Goddess, is darker than the shirt (if you look at it head on), is almost the same color as the shirt and disappears (if you look at it sideways or in low light), or blazes white (if it has a beam of light projected on it): 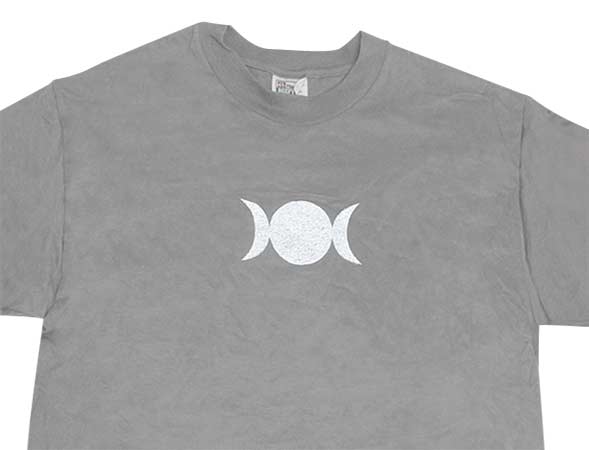 Next up is a single Nanohazard shirt, size S, printed in white ink on a red shirt (instead of white on black like the others). EDIT2: This one is gone now, as well. 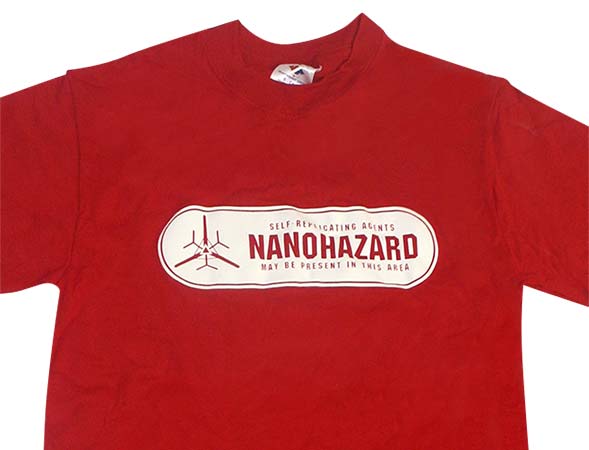 I also found some conventional white-on-black nanohazard shirts in some sizes I ultimately ended up not carrying (two Medium and two Small).

And finally, I found some shirts printed in reflectorized ink with a logo that says “Satan Inside” in a parody of the “Intel Inside” logo. I printed these up before discovering that the laws which protect parody of copyrighted work don’t extend to trademarks (in the US, copyright and trademark are entirely separate things). I have one XXL, one XL, and 2 M of this shirt: 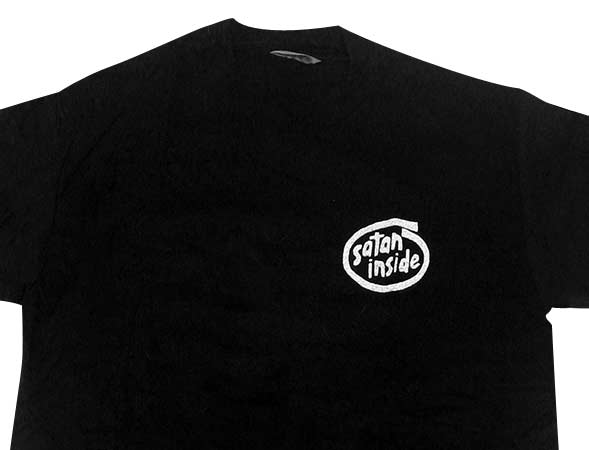 So I’m making these shirts available for $10 each. First-come, first-served. I’ve set up a special ordering page here; make sure you tell me in the “Special Instructions” section which shirt and size you want!!