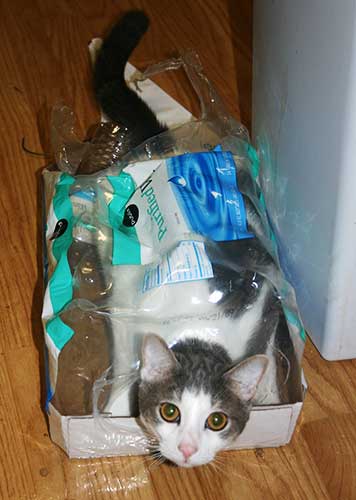 Liam is cursed with that same irresistible urge that gave us hairless naked apes the iPod, the steam engine, and nearly complete domination over all the earth: curiosity. If I place a box anywhere in my apartment, even if it’s simply a bottled water box that is set to go out with the trash, Liam will not rest until he has been over, under, around, and through it. He’s compelled, you see. He loves novelty, and he wants to know what it’s all about.

He’ll usually sleep in any box I put on or near the floor, at least for a few days. When it ceases to be novel and interesting, he grows tired of it and returns to sleeping at the foot of the bed with me. Like us naked apes, he’s curious and also fickle in his attentions.

Curiosity is a pretty sophisticated trait for an animal whose brain is smaller than my fist and not very wrinkly. In terms of raw processing power, a dozen Liams put together would compare pretty poorly to an IBM Blue Gene/L supercomputer, a much more computtionally powerful, yet singularly uncurious, piece of equipment.

Liam is actually pretty sophisticated in many of his behaviors. A couple weeks ago, he made a face at me.

It happened while I was eating frozen TV dinner apples. Microwave baked apples are tasty and delicious, and I make a point to eat them regularly. Five minutes in the microwave and you can have a small black plastic tray of bliss.

So there I was, sitting by my desk playing World of Warcraft and eating microwave baked apples, and Liam hopped up onto the desk and, brazen as you please, reached into my black plastic tray of bliss with his paw, hooked out a small piece of apple, brought it up to his nose, sniffed it suspiciously, licked it, and made a face at me. He shook the apple off his paw in disgust and wrinkled his nose at me.

Then he watched me eating the apples for several minutes, stole another bit of apple, sniffed at it even more suspiciously, and made another face at me.

Or, if one’s inclination runs that way, one might sit back and ponder the surprising degree of cognitive prowess the cat possesses.

I mean, seriously, think about it.

The cat recognized that I was eating something. We take that for granted, but there’s a lot of intellectual horsepower being brought to bear on a task of that sort. First, it means that he was able to map a projection of himself onto a projection on me well enough to be able to determine what kind of activity I was engaged in, and to recognize that it’s an activity he also engages in, despite great physical dissimilarities between us. That, at its foundation, means he was able to recognize the difference between himself and the rest of the world, and to recognize that some things in the world are more like him than other things in the world, to recognize those things when he sees them, and to recognize patterns of behavior common to he and I even as he recognized that I am distinct from him. Human babies take rather a long time to sort all this out.

Then, he was able to make an inference–namely, that what I was eating might be something e would like to eat as well. He made this inference in the absence of other cues, such as smell; he is, after all, a carnivore, and he is uninterested in a tray of baked apples just sitting by itself. (I know; I tried. What can I say? I was curious, too. He probably thinks they small like rotting plant matter.)

When he made this inference, he was able to formulate and then implement a plan of action, which shows at least a very limited ability to plan, even if only in a simple way.

When he obtained a piece of apple and decided it was just as revolting as it smells, he was then faced with a conundrum; this stuff was revolting, but clearly I was eating it (and with great gusto and no small amount of satisfaction, I might add). So he was willing to re-evaluate his original decision, and put it to the test again–something, the cynic in me begs to point out, that appears beyond the cognitive grasp of many people I know.

A couple of weeks ago, in a repeat of the I am not Sir Edmund fucking Hillary debacle that left me stranded on the balcony with a rope in my hand, Shelly went onto the porch to do some tidying up and the door locked behind her, trapping her until I came home for lunch.

Liam, in another example of cognitive dexterity (the only kind he has, I fear, as he is a stunningly clumsy cat), recognized that she was trapped, and became highly distressed and agitated. That shows empathy–the ability to map himself onto her and to respond as if he was the one in the distressing situation. He also knew that the door’s latch was to blame, and pawed and batted at it in a charming but unsuccessful bid to release her. Lack of opposing thumbs, and all that.

A Blue Gene/L system has, at very rough estimation, approximately the same processing power as a human brain. The Blue Gene/P supercomputer, currently in development, will well and truly trounce human beings in terms of processing ability. However, the architecture is very, very different. Modern computers are just really big, really complex Von Neumann machines, bound by the fact that the processing and memory are distinct entities which interact with one another in a series of discrete state changes.

A brain cell can roughly be mapped onto a transistor in the sense that it has only two discrete states, “firing” and “not firing,” but the architectural similarities pretty much end there.

Which means that, given sufficient cleverness on our parts, it should be possible to take these wonderful brains of ours and emulate them in these crude computers of ours, without loss of fidelity.

Chew on that for a while.

I love Liam. He’s very sweet, and he is a constant little reminder in my life of figment_j. I continue to be impressed by the range of cognitive flexibility we take for granted, even in relatively unsophisticated animals, and I can hardly wait until we start building machines which can exhibit the same kind of cognitive skills.

We’re not there yet, but we will be soon. When IBM makes a supercomputer that has Liam’s level of cognitive prowess, the Singularity will well and truly be nigh.