feorlen spent the last few days with us, braving Florida’s humidity and a cat with an unfortunately-timed UTI to hang with Shelly and I.

Wednesday we wandered around downtown Tampa and Ybor City, talking about relationships and urban decay and taking pictures of the grafitti. Tampa has recently seen an explosion in political “treet art,” most of it preprinted and slapped up on abandoned buildings all over the place. Some of it is really quite sophisticated, and it’s everywhere.

We didn’t have to look too far to start seeing commentary; someone had made his views on the recent rate increases on downtown parking meters quite clear: 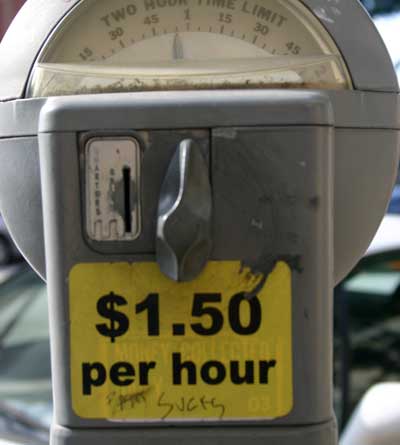 A few blocks from where we parked the car, we found an abandoned building totally plastered in political agitprop: 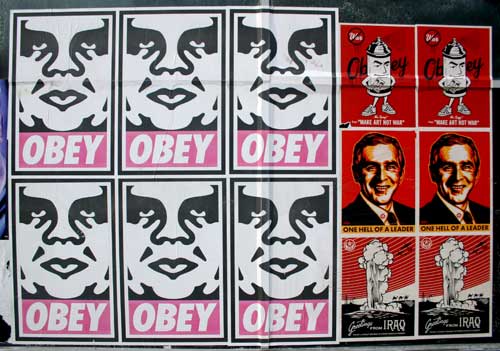 The image on the left is well-known in billboard hacking circles; it’s the face of Andre the Giant, and the icon was designed by activist Shepard Fairley as part of an anti-authoritarian and anti-consumerist propaganda campaign. (There’s an interview with Fairley here.)

Some of the other imagery, though, is even more interesting.

My favorite image is the “Hell of a Leader” poster of George W. Bush: 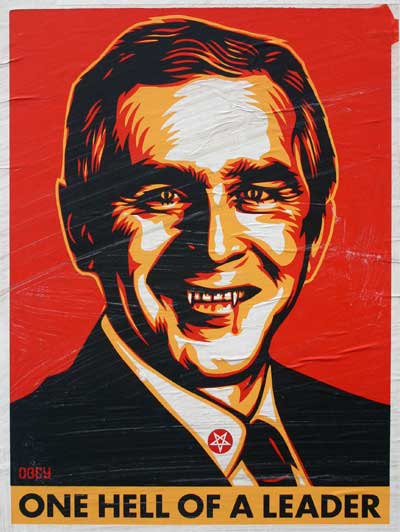 We looked at the posters up close; they look like they were screen printed, probably on a hand-operated press, and slapped up on the wall with wallpaper paste. The Iraq War piece is interesting as well: 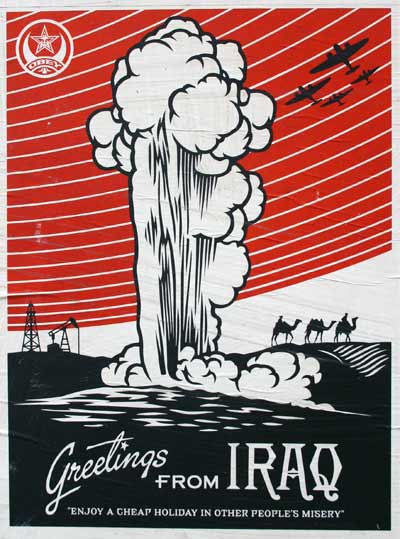 “Enjoy a cheap holiday in other people’s misery” indeed. Interestingly, just last weekend I spoke to a person who still believes the Iraqi war is perfectly justified, a noble and selfless effort to bring democracy and peace to an oppressed people. I didn’t know there was anyone left who still believed that.

On the building next door, an old and long-abandoned wig factory, we found none other than Chairman Mao: 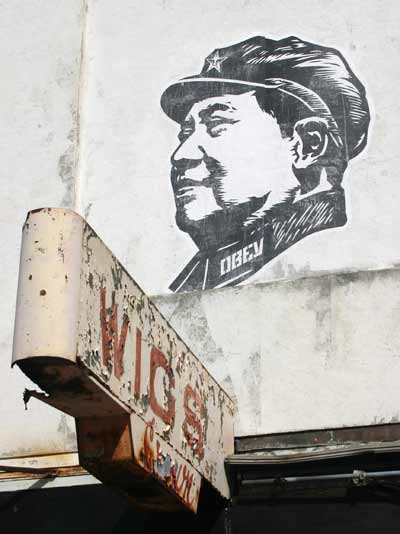 The other side of the same building has this image: 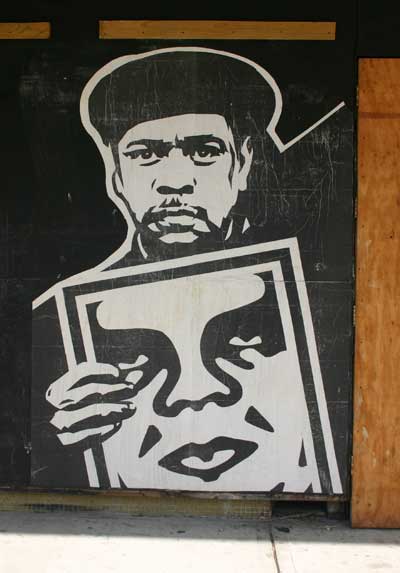 Can anyone tell me who that is holding the image of Andre the Giant? Looks a bit like a cross between Che Guevara and Ice-T.

A few blocks down, Andre the Giant makes another appearance: 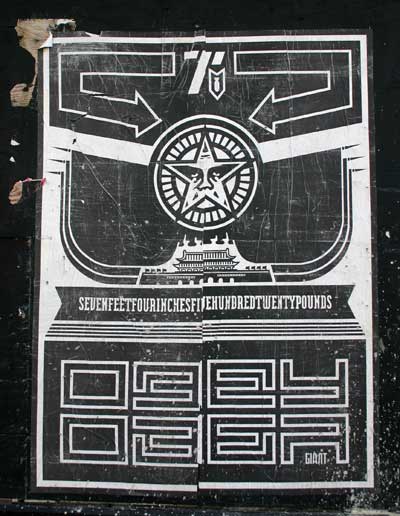 On the same building, we also found this. I have no idea whatsoever what it means.

Not all the pieces we saw were so political in nature. Some of the art was more iconographic: 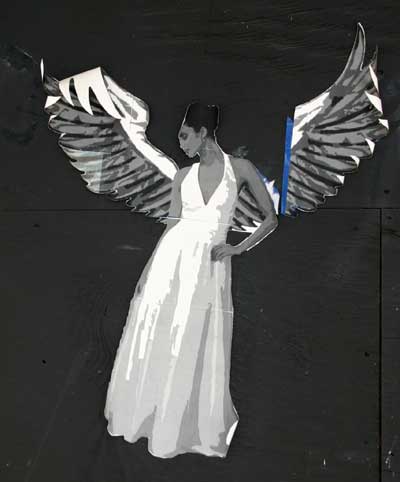 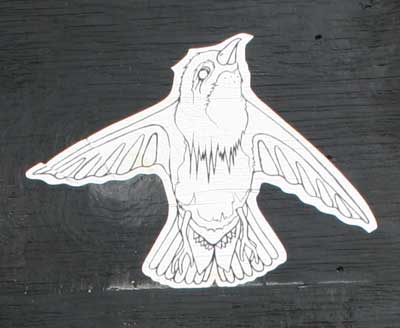 The same bird theme shows up in this piece, which I also don’t really understand: 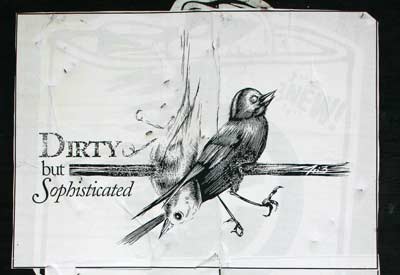 On a nearby traffic signal control box, we saw this rather freaky guy: 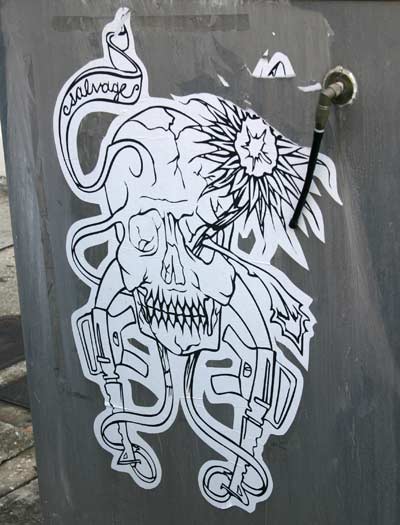 And, on a traffic signal box a few blocks away, this piece (the artist himself, I suspect): 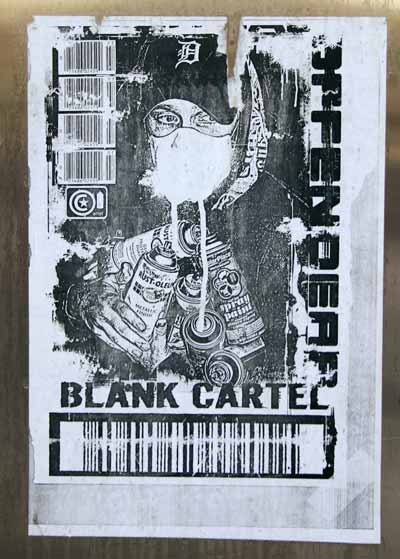 We also found this little spray-paint bird in several places around the downtown area: 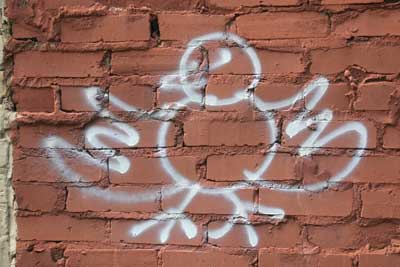 I think he looks happy.

And finally, on the side of the Masquerade in Ybor, I found this piece of grafitti, which I include here because I find it very amusing and more than a little ironic. I have no idea who these people are, but I wish them well. 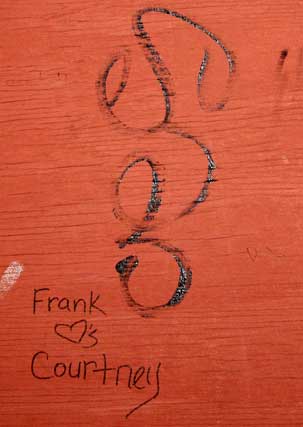 feorlen and roadknight are buying property in San Francisco, a process that was set in motion scant days before her trip out here, so she spent quite a bit of her time talking on the phone and faxing lengthy documents to California. Should things not work out with the venture capital situation of the company I’m a minority partner in, it’s not outside the realm of possibility that Shelly and I might end up in San Francisco ourselves at some point in the upcoming year or so; more on that later.