Necronomicon is the closest local equivalent of the Hajj, the Islamic pilgrimage to Mecca. The nice thing about Necro is that the pilgrimage comes to me, rather than the other way around. It’s an annual convention of science-fiction geekdom of high order.

Sadly, I have relatively few pictures to share of this year’s Necro, as an unfortunate accident on my part deleted many pictures from my camera. All was not lost, though, and I do hae much delight to show you.

smoocherie stayed with us for the weekend, which was delightful; we’ve seen more of her these past three weeks than in the six months prior. Shelly got a new, silver corset for this year’s festivities, and it is the hottest. Thing. EVAR. 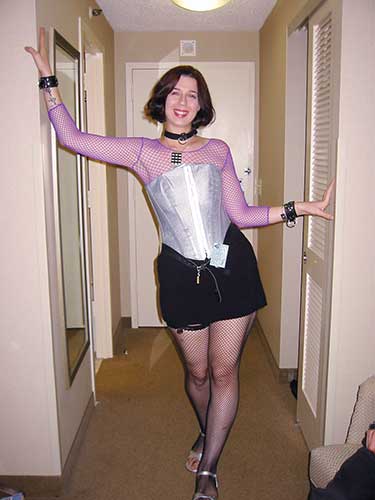 The convention was, as it always is, the usual assortment of geeks, freeks, and general hottnests. This year’s festivities featured not one but two strip parties; Strip “Are You a Werewolf?” and Strip “Apples to Apples.” Physicist Sir Arthur Eddington once observed, “Not only is the universe stranger than we imagine, it is stranger than we can imagine.” It is not, however, so strange that datan0de can not make any part of it into a game in which the players disrobe.

Of bondage, drama, and nudity

Friday night: Strip “Are You a Werewolf?” This is a social game, played with a deck of cards which randomly assigns a role–werewolf, villager, or seer, to the players. A game is played in cycles; each night, the werewolves, whose identity is unknown to the other players, silently and secretly choose a player to devour. That player is then removed from the game, and the seer silently chooses a player and has a vision that identifies that player as villager or werewolf. The villagers, incensed at the heinous crime, vote among themselves as to which of their number they believe to be the werewolf, who is then lynched. The cycle continues until the werewolves devour the villagers or the villagers correctly identify and lynch the werewolves.

Traditionally, the way we play is that each member of the losing side–werewolf or villager–loses an article of clothing.

During this year’s werewolf party, someone brought out a large coil of rope and casually mentioned that it was ideal for tying people up with, and someone else–a friend of phyrra and nihilus–eagerly volunteered to be the subject. “Well, hey,” someone else–I didn’t quite catch who–said, “Franklin here does rope bondage, and the next thing you know…

“I’ll try to do this without groping you,” sez I. “Groping’s cool, grope away,” sez she. I managed not to grope her–probably a good thing, since her partner appeared about midway through, within seconds of this picture being taken, and there was some drama. I didn’t witness the drama, and I’m told it was resolved amicably the following day, which is always good.

Got a nasty rope burn on my thumb, though.

Of elevators, Apples to Apples, and taking over the world

Saturday we made our appearance at the convention quite late, a fact I blame on smoocherie. I wanted to go to bed early, see, but she insisted on being interesting at me.

We arrived eventually, and ate ice cream. Ran into an old partner of mine, M: 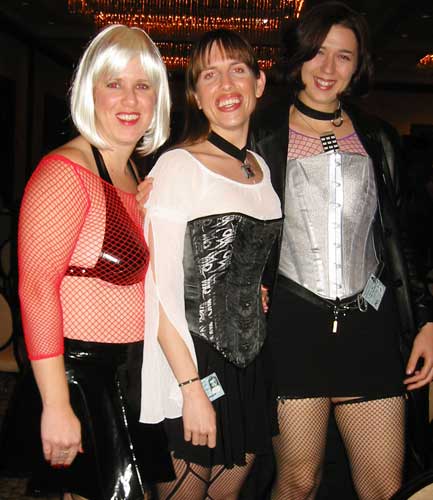 Also spent some time with my archnemesis, and saw his hero, Gir: 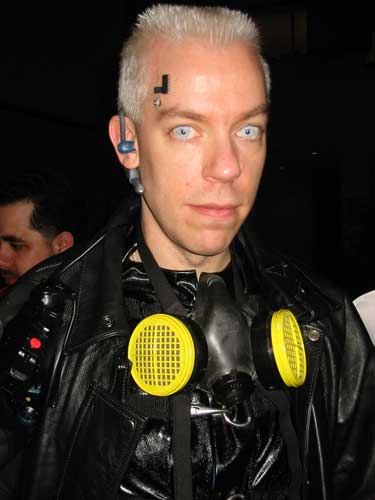 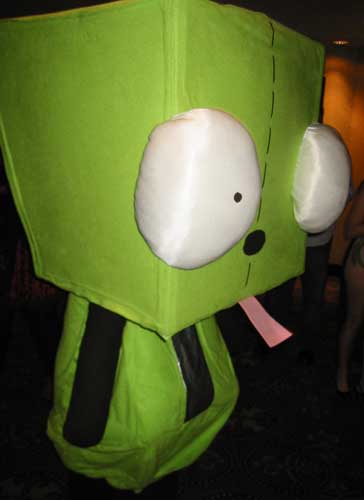 My partner S‘s other partner Sterling entered, and won, the masquerade contest. I’m told this is a character from the TV show Angel; never seen it. 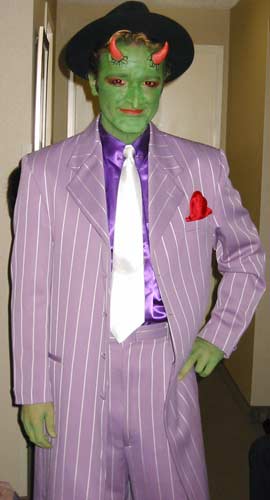 Necro was held in a new hotel this year. Traditionally, in every hotel which plays host to the convention, at least one of the elevators will fail every year…and this year continued the tradition. Fortunately, the new hotel is equipped with hydraulic elevators, which don’t fall when they’re overloaded.

The elevators were mirrored, as all swanky elevators in all upscale hotels are. 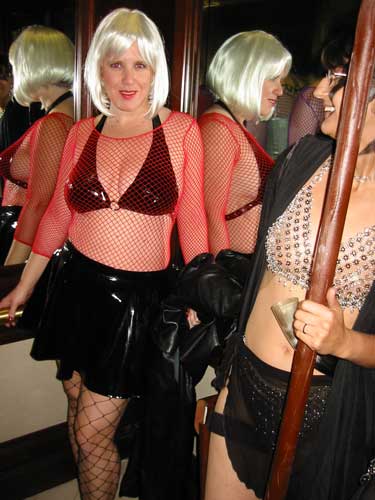 smoocherie multiplied, and my partner S

istislah showed up on Sunday, so sadly missed much of the activities. She did, however, bring a rather copious supply of M&Ms.

She also took advantage of the opportunity to grope smoocherie, something that may or may not have been negotiated but definitely needed no intervention: 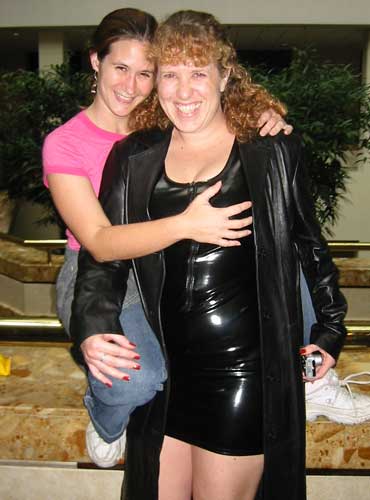 I had more pictures, which have been sent to digital oblivion–among them being pics during Werewolf and many pics of S and the members of the Smoosh. smoocherie snapped this pic of me, which is horribly backlit but shows off my fun “Hellraiser” jacket: 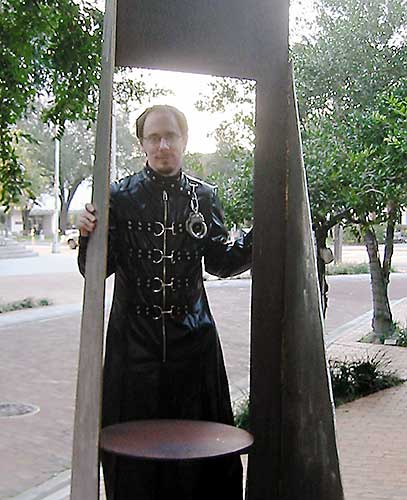 I know a lot of you guys out there have additional pics, which I need to get copies of…datan0de? zensidhe? nekkidsteve? (I got the pics you sent of the impromptu bondage session.) Anybody else?

30 thoughts on “More sights to show you”