It’s been a long, frantic, busy week. As with most things, thee’s a simple explanation, and a complex explanation.

A client’s server computer went down, and I had to replace the motherboard in it.

This is a sordid tale of corporate espionage, incompetence, greed, and Asian notions of “honor” and “face.”

Before I get into the whole cloak-and-dagger story, a bit of background: Computers and other electronic devices use components called “capacitors,” which are small metal cylinders, vaguely can-shaped, that are soldered to circuit boards. Capacitors contain a viscous, oily material called a “dielectric,” which improves their efficiency.

Last year, a scientist working for an electronics firm in Japan stole his company’s formula for a high-quality dielectric, and fled to Taiwan, where he sold the formula to a Chinese firm that manufacturers capacitors. The Chinese firm began making capacitors with the stolen formula in mainland China and Taiwan, where they were sold to Taiwanese motherboard manufacturers Abit and Micro-Star. Many thousands of the capacitors were also sold to IBM.

These are cheap components, costing less than a penny apiece in quantity. Manufacturers could shave a few cents off the cost of a motherboard by using the Chinese capacitors in place of name-brand capacitors from Taiwan and Japan, which cost a few percent more.

Problem is, the thieving scientist bungled the formula. The dielectric formula as sold to the Chinese firm was incomplete.

As a result, the capacitors using the faulty formula are unstable, and tend to fail dramatically. In some cases, they will physically explode after a few thousand hours’ use. When they do, the result looks like this: 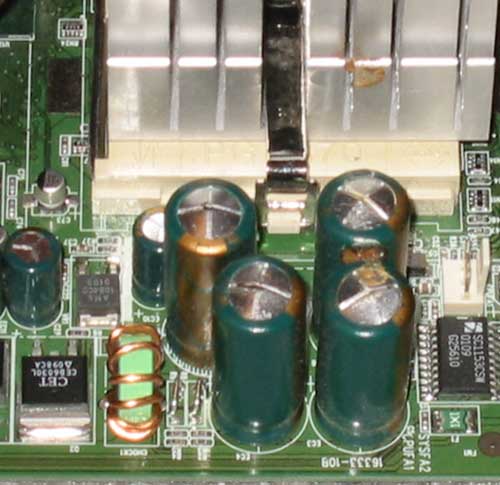 As you can see, the tops have split open on the capacitors. The brown crud all over the place is the faulty dielectric, which leaks out and turns to a hard, crusty mess.

This causes the computer to fail.

So I spent a good part of the week replacing the motherboard, and rebuilding the Windows install on the affected server.

My client’s server has been down for several days as the result of the unethical and incompetent corporate espionage of a Japanese scientist and the greed and petty cost-cutting of a couple of electronics firms (in this case, Micro-Star and IBM) who used untrusted components from an unknown manufacturer to save a few pennies on the cost of a computer.

The moral lessons here are not necessarily obvious. Yes, greed is bad; but beyond that, there’s another factor at work here as well.

The world we live in is a complex, interdependent entity, where actions by single individuals half a planet away can reach out and touch people far removed from them. I’m sure the thieving scientist and the greedy accountants at IBM and Micro-Star didn’t intend to make my week miserable, but their actions conspired to do so anyway.

The scientist involved was never arrested. Why? Because he’s in Taiwan; someone in Taiwan would have to lodge a criminal complaint against him. However, the manufacturers in Taiwan are reluctant to do so, because admitting they were hoodwinked by a vendor would be a grave loss of face. (For the same reason, the Taiwanese author of the Cherynobl virus was released after he was captured because no Taiwanese firms would risk losing face by admitting they’d been affected by the virus.)

Thge law of unintended consequences is as immutable as the law of gravity. So, too, is the fact that if you do not stand up against peope who do wrong, those people can continue to do wrong; pride can make anyone into a victim.