It’s Tuesday, and I still haven’t recovered from the weekend. Does that mean I’m getting old?

Saturday morning, Shelly (bandage) decided she wanted something pierced. She, Kelly (kellyv), Mel (lightgatherer), Nan (moonshadowdance), and their partner Chris went traipsing to the tattoo parlor to do the deed.

Okay, so I lie. We didn’t actually “traipse.” We were on a mission; we went with a purpose. Shelly wanted needles and pain.

Have I mentioned recently how absolutely lovely Shelly is when she has pain inflicted on her? She got two piercings, hood and labia, and was flying like a kite for hours. 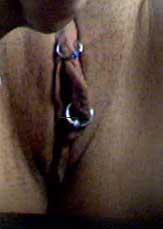 Saturday evening: Kelly, Shelly, myself, and my “other” girlfriend M head over to spend the evening with Chris, Nan, Mel, and about a dozen of their closest friends, where we all nest and watch anime all night long.

Yes, it sounds geeky. And no, I don’t like anime, for the most part (gasps of shock and horror from the peanut gallery, I know…). But it was a blast anyway.

It was also rather naughty, but I don’t really have time to go into it, so you’ll just have to imagine the details. (I have pictures, but I’m not going to post ’em. Neener neener!)

Sunday: Kelly and I hosted PolyTampa. At two o’clock in the afternoon.

We barely made it back from the giant flying robots in time, and we were all looking and feeling our best for the occasion.

I used to be able to bounce back from a night with no sleep much more quickly. Maybe I am getting old.

36 people, much good conversation, and I got a kick-ass tribal dragon poly sticker for my car. 🙂 Afterward, Thai food and more conversation.

Still no sleep, though. I ended up having an elaborate, complex nightmare Sunday night, which rather sucked. So I really looked and felt my best Monday morning, for…

I don’t know much about teargas or termites, but I learned a bit more about both Monday morning. Friday, they tented my office building for termites; apparently, when they do this, they inject teargas into the building to make sure nobody’s inside before they start pumping it full of toxic chemicals.

Teargas has a way of staying in carpet.

By the end of the day, I couldn’t see, couldn’t breathe, and looked like I’d been on a three-day bender.

Teargas is amazing stuff, and I mean that in the worst possible way. If I were a student demonstrater and the police shot cannisters of teargas at me, I might be inclined to throw a few Molotov cocktails, too.

Next week: Whips and chains excite me…

Chris, Nan, and Mel have agreed to accompany Shelly, Kelly and I to Tampa Fetish Party next weekend. I don’t think Nan’s ever been to an S&M play party before. MWAH haha!