Last week, someone tried to have a friend of mine killed. The attempted assassination was unsuccessful, and the people responsible are currently in prison awaiting arraignment on a number of state and federal charges. This kind of thing makes for one hell of a reality check; whatever challenges I’m facing and whatever issues may surround me and those around me, it could be a whole lot worse.

bandage and I went to Tampa Fetish Party last weekend. Regrettably, we still don’t know whether or not moonshadowdance will enjoy herself at an S&M play party, as she was unable to attend. Perhaps next time.

In any event, we were able to debut the second-generation illuminated spreader bar, which looks much better than the first go-round (and is quite a bit brighter, too!). The new one, which like the first lights up with continuously cycling colors, looks like this: 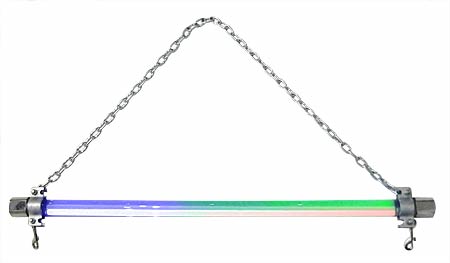 scarlete seems to think I’d make a good cult leader, based on my ability to make unreasonable things sound reasonable. I’m not quite sure what that says about the people around me, as cult leaders are generally successful not because of their own reasoning skills but because they tend to choose followers who’re easily led, but there it is.

Suffice it to say that I don’t think life comes in “one size fits all,” and I don’t think the path of least resistance leads to enlightenment, or to happiness. And this is a feature, not a bug. 🙂

I’ve been on America Online for…well, since 1992, meaning for the better part of a decade. In that time, a number of people have sent me instant messages.

Over the past three weeks, the volume has gone way, way up. And a lot–I mean a lot–of those instant messages have looked like “Hi! I’m 12. Wanna chat?”

Am I being paranoid in thinking that this is a very clumsy attempt to set me up, or is this happening to everyone?

And now, by popular request: 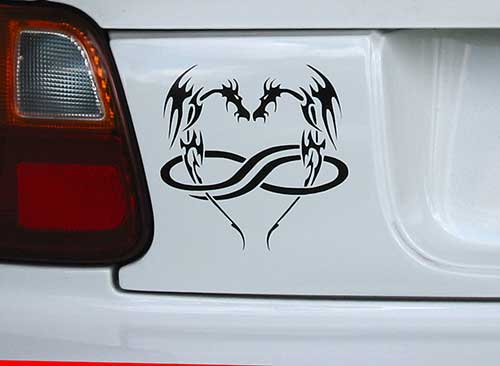 The design is a modification of the “polyamory” symbol, which is a heart inside an infinity symbol. It was created by a friend of mine named Mike, who plans to set up a Web site soon selling vinyl stickers in a wide variety of different designs; I plan to post a link to him when he’s ready.

Last week, I had a nightmare that was a bit different. In it, I was in a large department store; a television in one corner of the store was showing a news report about a group of armed men who were running around town taking hostages in various public buildings and then torturing them all to death.

Following the logic that seems common in dreams, this group of men burst into the department store with automatic weapons and rounded up all the customers, myself included. The leader of the group pulled one woman out of the group at random, tied her to a chair, handed me a revolver, pointed a gun at my head, and said “If you don’t shoot her, I’ll blow your brains out.”

What was most striking about this dream was the fact that I remember, in great deal, the chain of logic I followed when I was trying to decide what to do. It didn’t make sense to me that a person who was taking hostages would hand one of those hostages a gun; after all, he had no way to know if I was an off-duty cop or a security guard or someone else who might be tempted to just use it to blow his brains out and take my chances with his buddies. A hostage-takes who arms his hostages is likely to get shot by them…
,,,unless he knows that he won’t be…
…because…
…the gun is not loaded.

So: I acted like I’d never held a gun before and didn’t know which end was the business end. I acted agonized. I took aim at the woman, just a little bit past her, so as to miss her if my reasoning was faulty. I pulled the trigger.

He laughed. He’d won, of course; he’d proven that he had control, he could make me do whatever he liked. He took the gun away and handed me another. “Try again.”

I shot him in the head. Blew his brains out. I knew when I did it that the attacks would cease; this man was clearly the ringleader, and while his partners were dangerous, they lacked his drive and his particular brand of sadism. They’d get picked up by the police, one by one, and that’d be the end.

Of course, his buddies promptly shot me, which was the end of the dream.

I have absolutely no idea what any of this means.