“My vote doesn’t matter.” This is a common call of the North American White-Chested Citizen, particularly prominent during election years.

This isn’t really a post about political participation, except that it kind of is. Bear with me.

Back when I was a kid, I remember my father telling me to save money by turning off the lights when I wasn’t using them. I recall arguing the point with him, to the extent that I got a copy of the power bill, figured out what we were paying for electricity, then sat down and did the math about how much it would cost for me to leave the light on in my room all the time.

It turns out it really wasn’t much. The cost of lighting isn’t that great–one light bulb is barely a rounding error in the bill even if you leave it on all the time. Other things–the water heater, the refrigerator, the stove, the air conditioner–totally swamp the contribution made by that lowly light bulb.

So I went about my life for many years thereafter, not really caring if I turn the lights off or not, because they’re a drop in the bucket. Compared to other things I do, the energy I use for lighting is insignificant.

As CFL and LED lighting has become more common, I’ve cared even less.

But here’s the thing: It’s not just me. 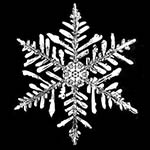 See this? This is not you. You are not a unique and special snowflake, except that you kind of are.

I mean, yes, you are unique in all the world’s billions. Yes, there has never been and never will be anyone else like you again. And yes, there really is nobody else who brings what you bring to the table. So in that sense, you are a snowflake.

But all snowflakes have six sides. There are consistent and repeatable similarities between people. Whatever chain of reasoning you use to arrive at some conclusion, there are other people who use that exact same line of reasoning to reach exactly the same conclusion. So when you tell yourself “My vote doesn’t matter,” there are millions of other people–people who might vote the same way you do were they to vote–who say the same thing for the same reason. When you rationalize leaving the lights on because the amount of electricity consumed by a light bulb is so small, millions of other people reach the same conclusion for the same reasons.

Which means it isn’t just you. You represent a multitude. You follow in the footsteps of many others, and they follow in yours. The road you take to arrive at whatever you arrive at is walked by more people than just you.

And that means if you want to make fully informed and rational decisions–decisions that account for all the variables and arrive at rational, logically sound conclusions–you have to account for the fact that you don’t exist in a vacuum–that whatever chain of logic you use to get where you’re going, other people will too. You need to account for the fact that it’s not just you, that the inevitable reality of being a person among billions of others is that whatever choices you make, you make in the company of millions of others for the same reasons.

No raindrop believes it is responsible for the flood. Each raindrop thinks “what difference do I make?”

I have resolved to stop leaving the light on.