And so it was, Gentle Reader, that emanix, having recently called upon her Aspect and bodily shoved a 22-year-old camper van from a deep ditch, calmly returned to the front seat and said “do you fancy some tea?” We drank tea, for all the world like nothing had happened. She fixed the broken clasp in her bra nonchalantly, as if popping out of clothing while performing impossible feats of force were an everyday occurrence with her (which, in all fairness, it might just be), and we were off.

I am not, Dear Reader, much of a planner. I would like to say I chose a route for us that was breathtaking in its efficiency and military precision, but that would be a lie.

Our next destination was the Oregon town of Sumpter, a town whose status as the incorporeal essence of the deceased is vastly overstated. It’s described as a ghost town on the Web, sure, but in reality, it has a population larger than many of the Midwestern towns I grew up in as a child. In fact, we arrived to discover the allegedly late town of Sumpter was having a street festival.

It was not a total wash. Sumpter does boast a tiny collection of ruined buildings from antiquity (by US standards, which means anything prior to 1950 or so). There was the old brick safe from the old bank that burned down during the old fire of 1917, for example. 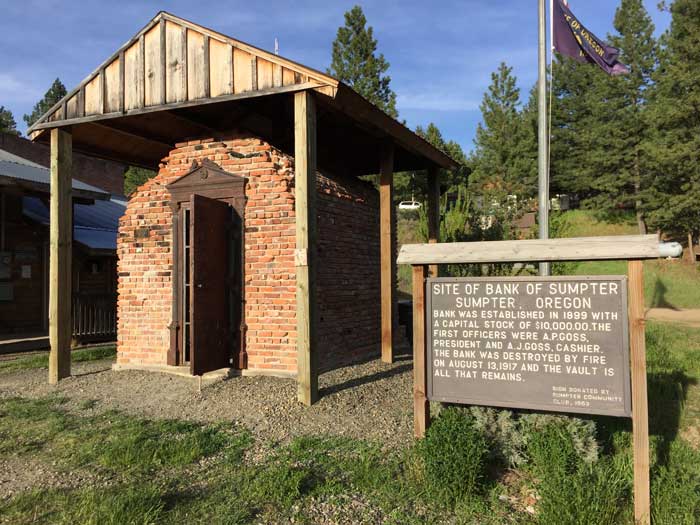 We also found the remnants of a long-abandoned gas station, now completely overgrown and with trees sprouting from what was doubtless once a nexus of commerce for the town. 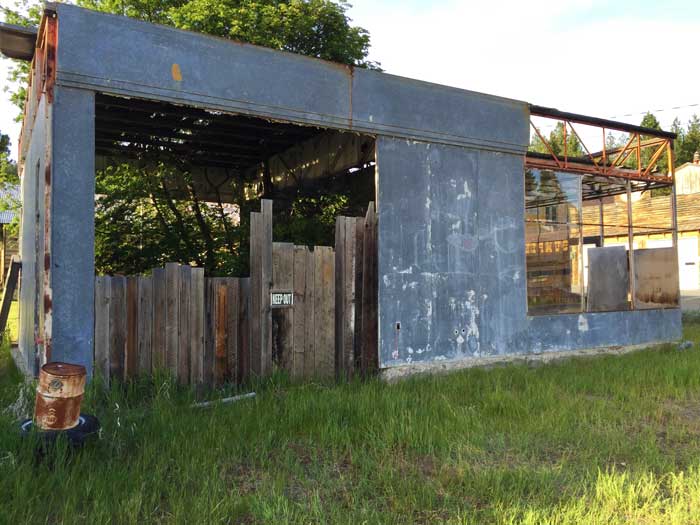 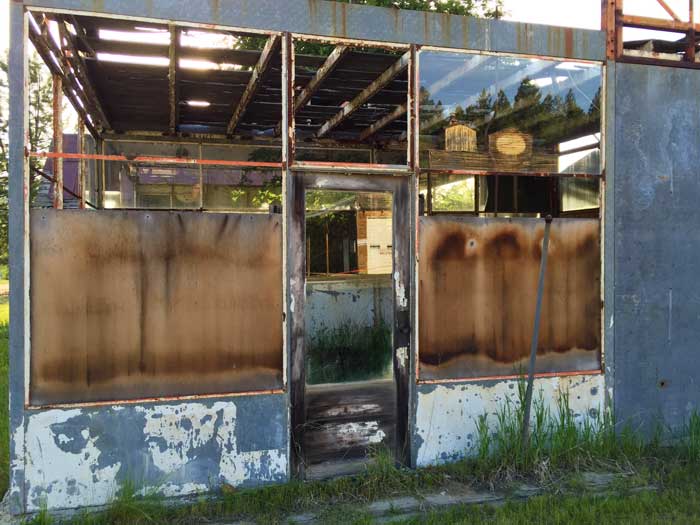 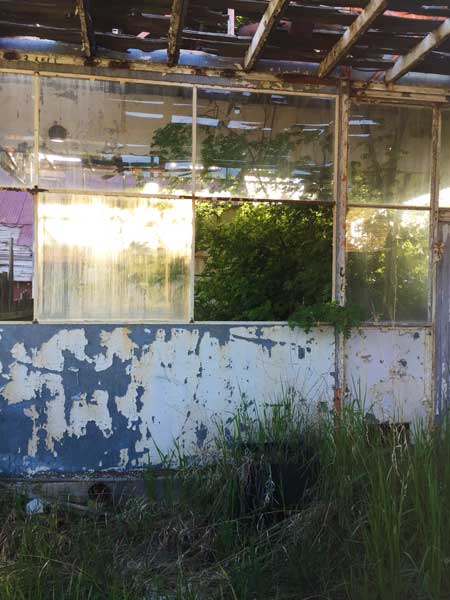 Something about this place kinda reminds me of a location from the video game Portal 2. I kept expecting to hear a synthesized voice say “Sorry about the mess. I’ve really let the place go since you killed me. By the way, thanks for that.”

The outskirts of Sumpter is home to an open-air museum of sorts given over to the study of the various ways in which large old pieces of machinery can gather rust. I recognized this mining dredge from my time in Nome, Alaska; it’s a smaller version of the dredges they used there. 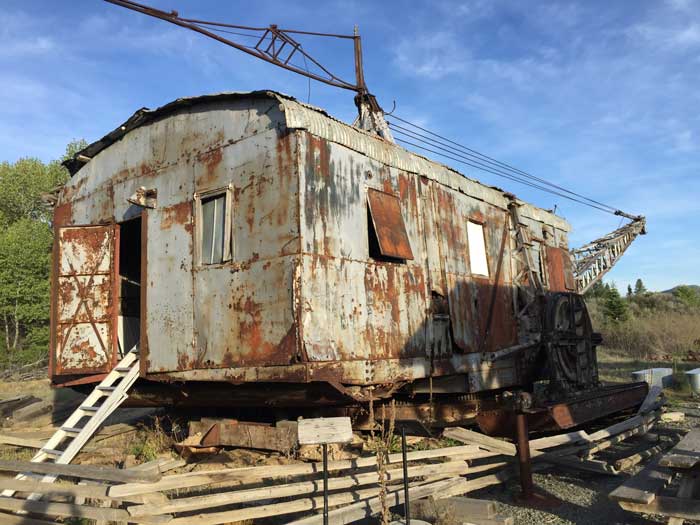 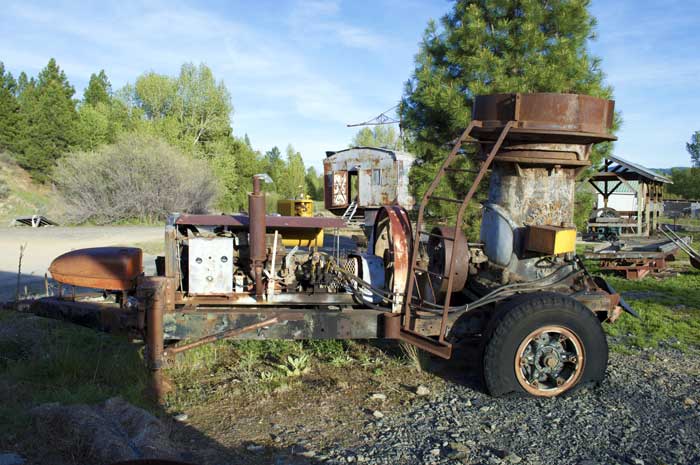 Probably a good thing, really. This machine looks like it runs on leaded gas and the fingers of the careless.

One of the vendors at the festival was selling corn dogs. Corn dogs, for those of you who are not acquainted with this peculiarly and quintessentially American gastronomic innovation, are hot dogs breaded with cornmeal, deep fried, and served on a wooden stick.

Bunny found the notion quite intriguing, having grown up in a land where things like black pudding (which is neither black nor pudding–it’s actually fried congealed horror) is more conventionally served. She had one, pronounced it delightful, and we stopped for the night, resuming our journey the next morning toward Sparta.

Sparta is not really a town. Sparta is a wide spot on a long dirt road that is more a suggestion of a town. It’s like one of those places in an open-world video game where you get the feeling that the game designers weren’t really trying, or couldn’t think of anything to put there.

One reaches Sparta, if one is of a mind to reach Sparta, by spending a very long time traveling a very narrow dirt road through arid desert. And believe me when I say “long” and “narrow.” This is the real reason people were reluctant to invade Sparta: it’s just too much of a pain in the ass to get there. 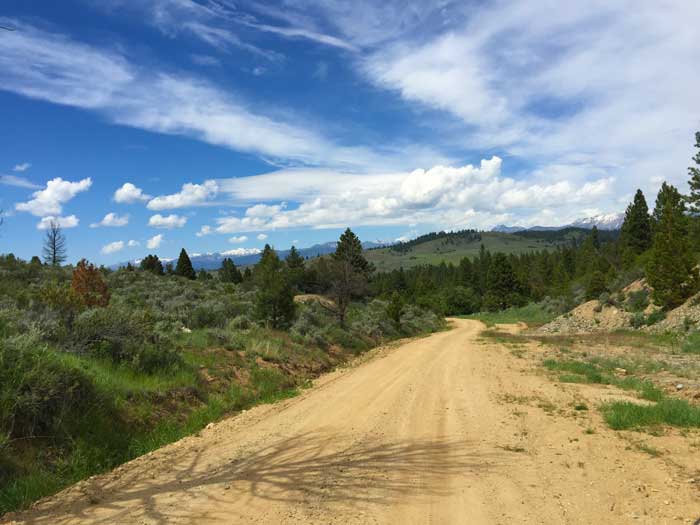 One travels along this road until one finds, first, a crumbling foundation, and then, a few miles past it, a crumbling stone cottage. 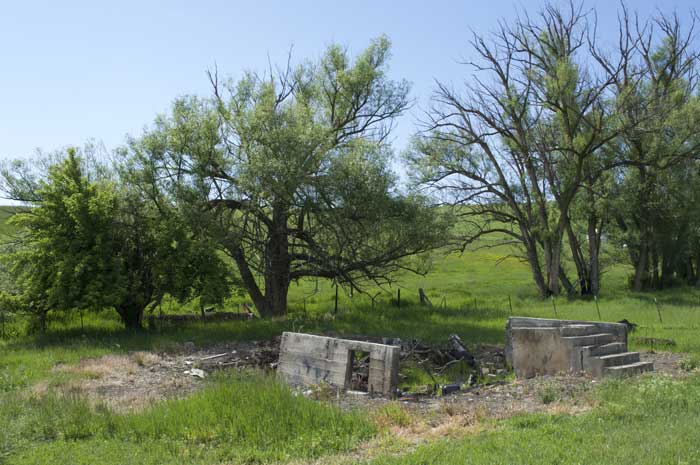 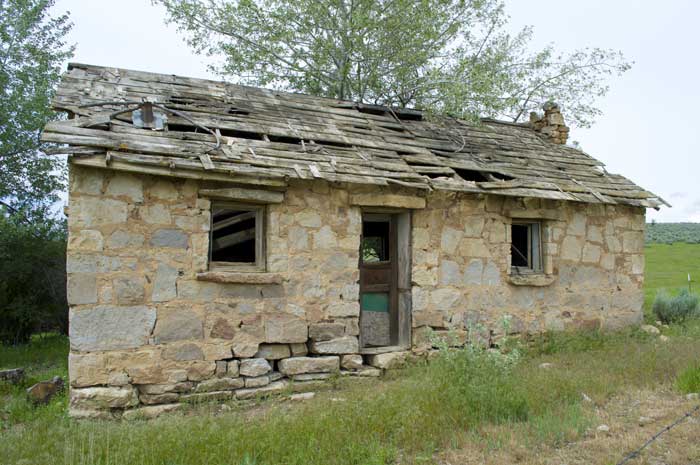 One then drives past these things, interesting but not really a proper ghost town, until one arrives at the center of town.

Ladies and gentlemen, this is Sparta!!! 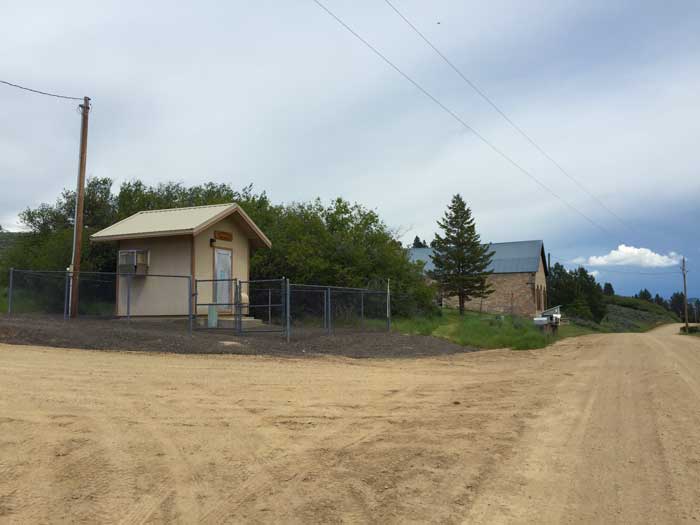 Seriously. This is it. This is Sparta.

We were, as you can probably imagine, distinctly underwhelmed. No crumbling old buildings quietly decaying into the desert sands, no burly spear-armed men thrashing about in ways that are no not even the least bit homoerotic not ever so don’t you even think that.

But fear not, Gentle Reader, for though our tale reaches a low point here, we were soon to discover ghost towns quite marvelous in their essential ghost-towniness, despite the lack of not-homoerotic burly spear-armed men.