In any human endeavor, there must necessarily be those things that don’t go quite according to plan. Just as Hannibal’s trip over the Alps with an army of elephants met with certain less-than-favorable outcomes, so too did our adventure.

We had to contend with fewer elephants and less snow than the luckless Hannibal, but we faced our own trials nonetheless. Chief among them was a dollar-store can opener, which, like many dollar-store items, was perhaps less splendid in its design and construction as we might have hoped.

This was unfortunate because emanix had, during our provisioning, acquired for us many canned goods, which, lacking a functional can opener, we were unable to use. The hatchet I had thoughtfully packed in the back of the van was an altogether unsatisfactory substitute. Fortunately, emanix is a skilled camper who plans ahead, and she had hidden in her numerous tool belts and pouches a US Army-style miniature can opener, which has a user interface that’s a bit less than obvious but nevertheless succeeded where my can opener failed.

Be prepared, they say.

With our cunning new plan (by which I mean her cunning new plan) to scope out potential ghost towns on Google Earth before journeying forth, we set about revising our itinerary and set off toward Granite, Oregon.

Granite was rather a long way from where we were, as our previous itinerary proved to be almost exactly wrong in every respect when compared with the new. So we set out on a flat ribbon of highway that stretched through the desert of eastern Washington and Oregon, driving for hours along a hypnotic stretch of arid tundra, with nothing to see or do–

That would, as it turn out, become the refrain of the day “Hey! Pull over! What’s that?”

I pulled over. Just off the road, Bunny had seen a crumbling barn, quietly decaying into the landscape. 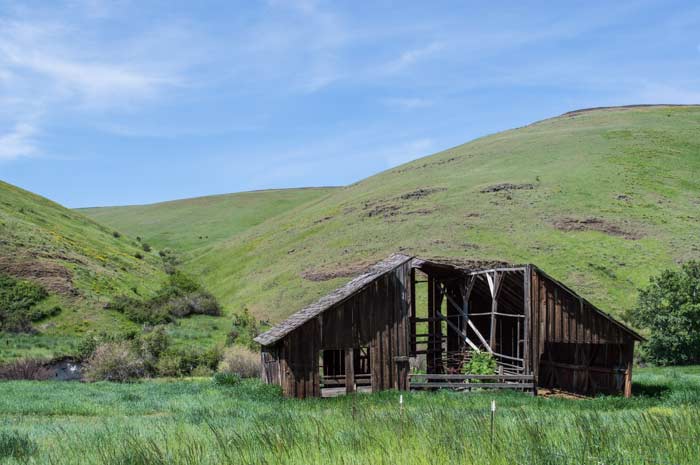 We stopped to shoot some pictures, then headed off once more, destined for Granite, where we hoped to–

I pulled over. Bunny had spotted the top of a crumbling house just peeking out between the trees in a valley right off the road: 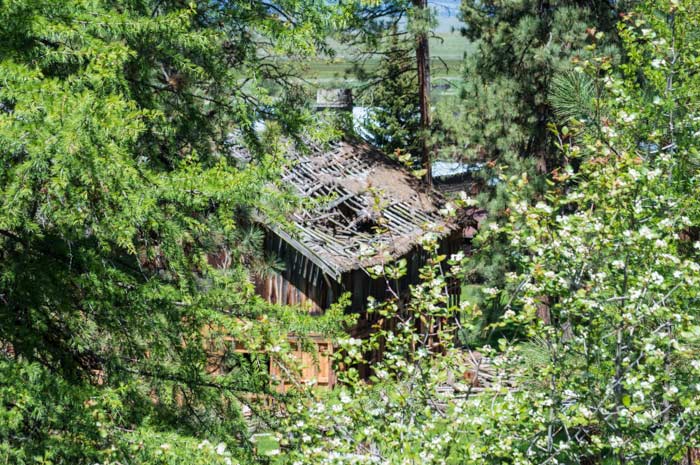 When I’d parked just off the road, we hiked back to take a look. We weren’t disappointed. 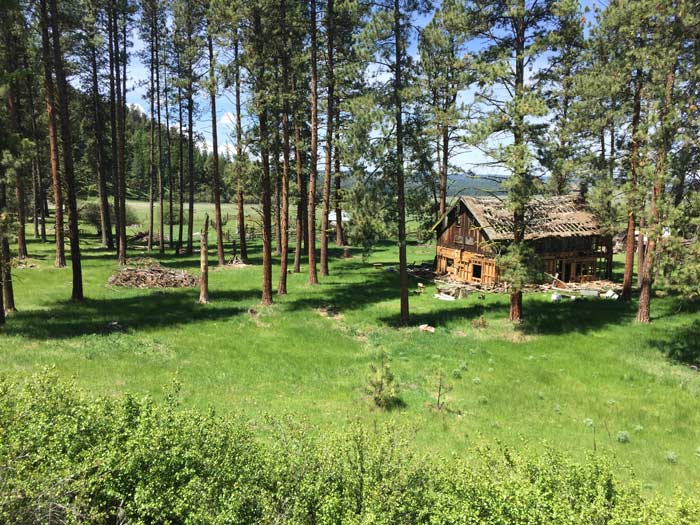 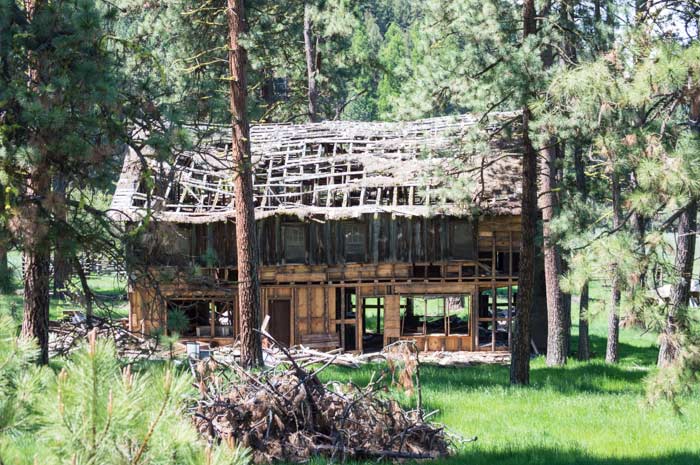 This was, Bunny said, the sort of thing you don’t see in England. Great Britain is a small, densely inhabited country completely surrounded by water. The western United States is an enormous, sparsely-populated country with vast quantities of land being put to little use. The two could not be further from each other unless England were a suburb of Hong Kong (which, compared to the desert of rural Oregon, it might as well be), so there is a great deal of stuff we take for granted in the more uninhabited part of this country that you don’t expect to find across the pond.

Sadly, we were unable to get closer, as it likely would’ve been quite a lot of fun to explore this magnificent old ruin.

We piled back in the van. The wheels turned, the road hummed by, and–

Pulling over turned out to be a bit trickier this time, as we were on a narrow paved road with no shoulder cutting through a vast swath of absolute nothingness.

The “what’s that?” in this case turned out to be a deer that had apparently tried to leap over a fence, with sad results.

emanix took pictures, with her parasol and bunny ears…there are moments when I am with her that she just seems so very British.

I felt bad for the deer, though. Nothing should have to die like this. 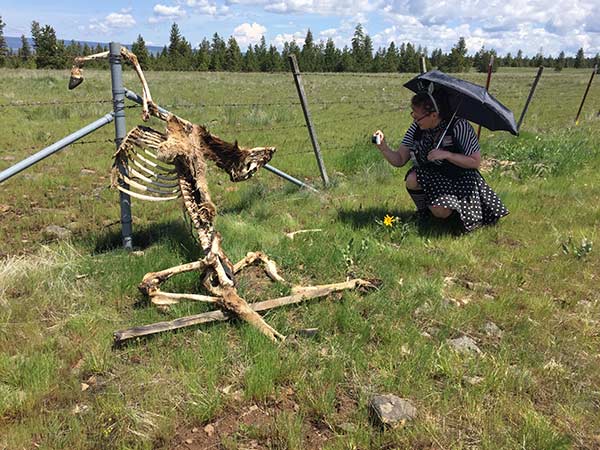 It will definitely be appearing in the book she’s working on, no question about it.

We set off once more, the van eating away at the miles between us and Granite, bringing us closer with each passing mile to–

This time, “that” turned out to be the remnants of a long-deserted gold mine.

I should mention as an aside, before I continue on, that the ruins of long-deserted gold mines seem to be a regular theme in my life these days. A few months back, Eve and I were on our way to talk polyamory at a swinger convention in Canada when, from the window of our rented car, we spied a glimpse of a long-abandoned gold mine and, naturally (because we are who we are and we must do that which it is in our natures to do) we stopped to explore. The video that accompanies my Patreon was shot there, and I still intend to write about the place (with pictures! Many pictures!)

This gold mine was much different from that one, an altogether cruder and less Indiana Jones place, and crumbing in much more spectacular fashion.

We forded a small stream to get there, which alerted me to the fact that my tumble off the log into the river the day before had not only given me a cracked rib but put a hole in my shoe as well–a brief discomfort, gentle reader, that was soon forgotten, driven from my mind by the splendor of large-scale wood structures in decay. 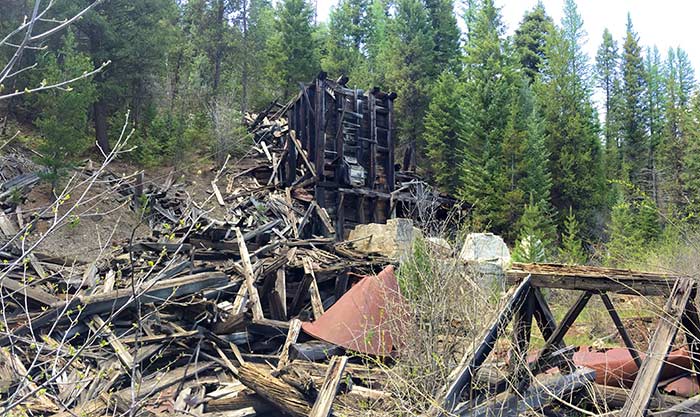 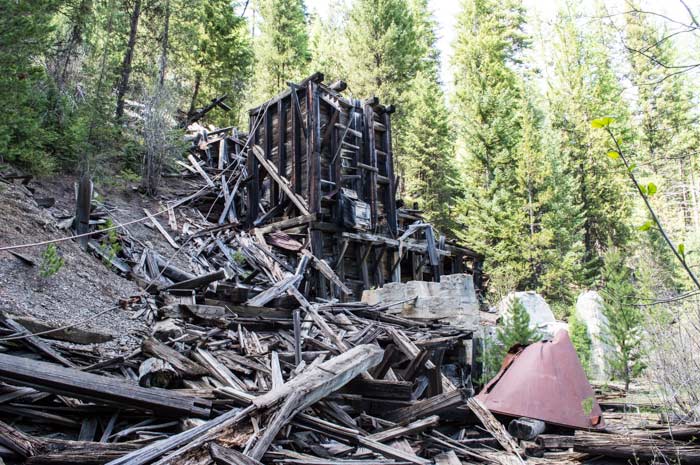 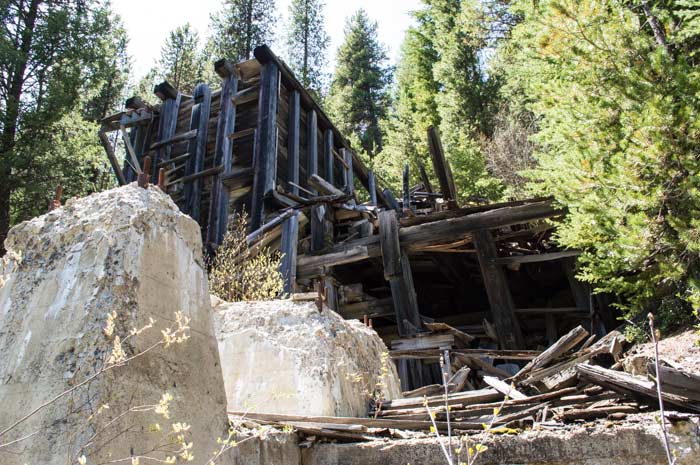 We scrambled up a steep incline to get more pictures. 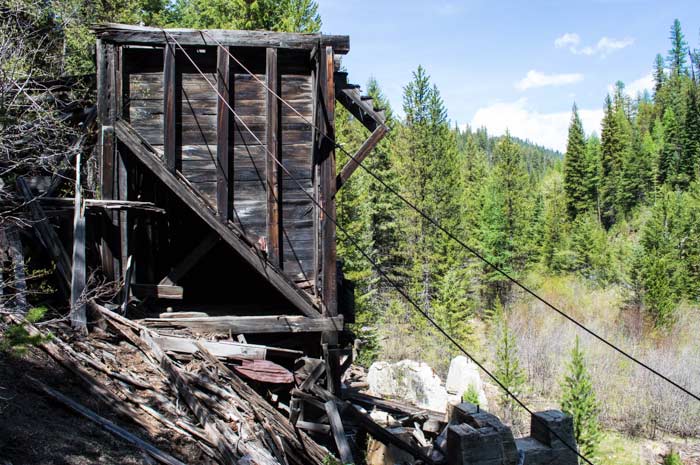 That little stairway on top, a few short steps to an abrupt and sticky end in the yawning chasm below, is nightmare fuel, for serious.

Let me take this opportunity to assure you, dear reader, that we did in fact eventually make it to Granite. We also passed something along the way that would turn out to be even more interesting than Granite, and I dumped the Adventure Van into a ditch while we were about it…but hat is a story for the next installment.

There is a postscript to this portion of my tale. Yesterday afternoon, as I was preparing for another trip to Canada, I received a package in the mail from Bunny, a gift sent all the way from the UK. Inside, I found this. 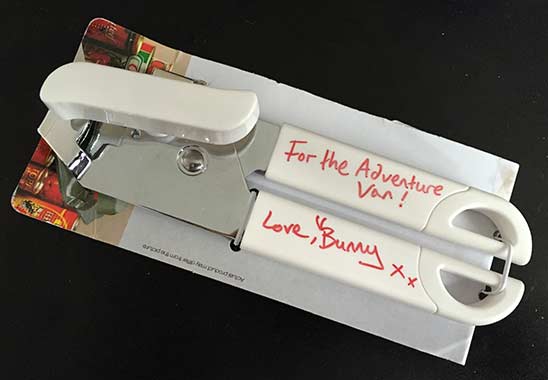 If you’re wondering why I love her, that is but one of many, many reasons.

2 thoughts on “Two Chaosbunnies in the Desert: Of can openers and serendipity”