It’s an article of faith among certain people that Monsanto, Inc, the American seed company, is inherently and intrinsically evil. And not just evil in the way that you might say any large corporation is “evil,” in that it’s an organization of people with a vested interest in the organization’s survival, but maliciously evil–deliberately and vindictively harmful to others and to society as a whole.

So pervasive is this attitude that it’s accepted even by folks who don’t have a particular problem with GM food or agricultural biotechnology.

I can’t really complain about the folks who accept this idea. I used to be one of them. For many years, my conversations about GM food took the form “I think that genetic modification is a valuable tool for feeding a world of billions, and there is not the slightest evidence whatsoever that GM foods are in any way harmful or dangerous, even though I think Monsanto is evil.”

I couldn’t really put my finger on why I thought they were evil. I just knew they were. It was an idea I’d heard so often and was so pervasive I accepted it as true. (There is a quote that runs “If you repeat a lie often enough, people will believe it.” It’s often erroneously attributed to propagandist Joseph Goebbels, though there’s no documentation that he ever said it; the idea appears to have been around for quite a while.) I consider myself a skeptic and a rationalist, but I am still not immune to accepting things without evidence merely because I have heard them often enough.

In fact, it was during an effort to prove how evil Monsanto is that I started to realize many of the things I’d believed about the company were wrong. Someone in an online debate had challenged me to support the idea that Monsanto is an evil company, and I’m rarely one to turn away from a challenge to what I believe. “Piece of cake,” I thought. “A few minutes and a half-dozen links ought to be enough. This ought to be about as hard as proving that Moscow is a city in Russia.”

If you Google “Monsanto evil,” you’ll find a vast river of hysterical Web sites that scream Monsanto’s vileness to the heavens, usually accompanied by ridiculous and emotionally manipulative pictures like this: 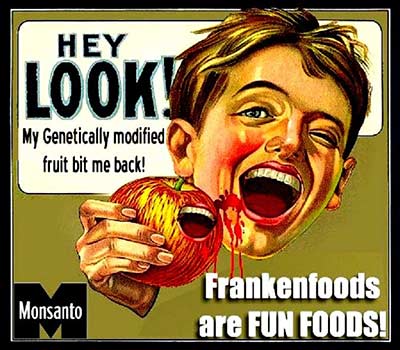 But this river of Google effluent is about as persuasive as a Flat Earth Society page, and I reasoned that if I wouldn’t find the source credible myself, it would be disingenuous to try to use it to support my argument. Besides, I thought, I didn’t need to cite crap sources like that–there was plenty of legitimate support for Monsanto’s encyclopedic catalog of evil from reputable sources.

So I kept going, past the Googlerrhea of sites like NaturalNews and GMOwatch, looking for the clear and obvious evidence I knew would be there. I had heard all the standard arguments, naturally, and was quite confident they would be easy to support.

It turned out to be not so simple after all. In fact, the deeper I got, the more Monsanto’s supposed “evil” started to look like smoke and mirrors–propaganda fabricated from the flimsiest of cloth by people frightened of agricultural technology.

First, I thought Monsanto was enormous. It’s not. As corporations go, it’s actually not all that big. It’s about the same size as Whole Foods. It’s smaller than Starbucks and The Gap. It’s way smaller than UPS and 7-11. (In fact, I wrote a blog post about that last year.) As of the middle of 2014, Monsanto’s size compared to other corporations looked like this:

In fact, this graph is now out of date; as of the last quarter of 2014, Whole Foods is significantly larger in terms of revenue than Monsanto. (People who believe that little guys like Whole Foods are sticking it to the big bad megacorps like Monsanto likely don’t realize what they’re doing is merely supporting one giant megacorp over another.)

Then I read the company’s history, and learned that when people talk about things like how Monsanto made Agent Orange, they’re showing ignorance of a simple fact I also used to be ignorant of: there are, in a real sense, two Monsantos.

A Tale of Two Companies

The first Monsanto was Monsanto Chemical, a company that manufactured food additives, industrial chemicals, and plastics. This Monsanto no longer exists. In the late 1990s, it developed the drug Celebrex. Pfizer, the pharmaceutical company, bought Monsanto in 2002 because they wanted to capture Celebrex, a profitable and popular drug for treating arthritis.

Pfizer is a pharmaceutical company. As a pharmaceutical company, it’s not especially interested in being in agribusiness. In 1996, Monsanto (the chemical company) had bought an agricultural company, but Pfizer didn’t want to keep the agricultural business. So after the purchase of Monsanto, Pfizer spun off the agricultural business as a new company, which kept the old name Monsanto. This new Monsanto was entirely distinct from the old: new board, new directors, new business model, new bylaws, new incorporation. In what would prove an ill-fated decision, it kept the name “Monsanto,” which Pfizer also wasn’t interested in, to avoid having to rebrand itself. Changing the name, they estimated, would cost $40 million.

Was the old Monsanto evil? A case can be made that Monsanto (the chemical company) was a ruthless competitor. But a lot of the charges levied against it by the “Monsanto is evil” crowd turn out not to be true.

Monsanto invented saccharin? Not so fast

One of the claims I’ve heard many, many times is that Monsanto invented saccharin, the artificial sweetener. This is so far from true it’s “not even wrong,” as the saying goes. Saccharin was invented in 1879 by chemist Constantin Fahlberg of Johns Hopkins University. It was first manufactured in Magdeburg, Germany. Monsanto was one of many saccharin producers until 1972, but the claim they “invented” it is absolutely false.

In fact, these days, “Monsanto invented saccharin” is a litmus test I use in conversations with anti-Monsanto activists. If someone trots out this chestnut, I know he’s a person who can’t be arsed to do even a simple Wikipedia search to support his ideas. He is the sort of person who blindly accepts anything that supports his existing beliefs, and I stop talking to him.

This is another factoid routinely trotted out to prove Monsanto’s despicable evil. Only an evil company could invent and manufacture so foul a substance as Agent Orange, right?

Well, Monsanto didn’t invent Agent Orange. It was invented by the US Army in 1943–the notion that Monsanto created it is another of those litmus tests I use to determine whether someone is interested in doing even the most rudimentary fact-checking or not.

Old Monsanto aside, the new Monsanto is still evil!

So what about Monsanto (the seed company)? I keep reading tons of stories about how evil it is, but when I go to validate those stories, they tend to turn out not to be true.

Monsanto gets a lot of its bad reputation on the basis that it makes GMOs and people are frightened of GMOs. A lot of other companies also make GMOs, but Monsanto is singled out for special hate, even though it’s not the biggest company in the GMO business (Syngenta, for instance, is bigger).

Another common argument on the “Monsanto is evil” side of the fence is that Monsanto patents seeds. If a corporation can control our seeds they can control our food! That’s clearly evil, right?

And not all GM food is patented.

Once you get through the clearly false claims about saccharin and Agent Orange and patents, you start encountering the second wave of arguments for Monsanto’s evil evilness of evil, which usually ride into battle under one of two banners: “Monsanto doesn’t let farmers save seeds!” and “Monsanto sues farmers for accidental contamination!”

Here is where I believed I would find some real meat–some genuine, clear-cut evidence that Monsanto is bad news.

That evidence turned out to be a mirage–I saw it glittering on the horizon, but when I got close, there was nothing there but sand.

As for the idea that Monsanto is evil because they sue farmers for accidental contamination of their fields. I looked, but I couldn’t find any court cases of this. I did find court cases where farmers denied stealing seeds and said it must be contamination, but in all those cases, a jury or the court found they were lying. (Protip: If someone inspects your field and 98% of the plants growing on it are a patented variety, that’s not accidental contamination.)

One complaint I’ve heard many times, including in the comments on an earlier part of this series, is Monsanto is evil because their GMO seeds are coated in neonicotinoid insecticides that kill bees.

It’s hard, at first glance, to tell where to begin to untangle this snarl, because it confuses entirely unrelated things into a tangled mess of misinformation and error.

I mean, yes, neonics might be harmful to bees, possibly, but…er, um…

…that technology was developed by Bayer, not Monsanto.

And it has nothing to do with GMOs. Neonics are insecticides, not herbicides. They are not poisonous to plants; you don’t need to engineer plants to resist them. (In fact, they are derived from nicotine, a natural insecticide made by plants. The name “neonicotinoid” literally means “new nicotine.”) Neonicotinoids are seed coatings–they’re applied to seeds after the seeds are collected, not produced by the seeds themselves.

Of course, all this information is irrelevant in the face of the final, last-ditch argument put forward by Monsanto’s detractors…

It’s all a conspiracy, man

The conspiracy theory is the final sanctuary of the person with no arguments. It’s an attempt to discredit an argument without looking at the argument directly, and also poison the well, by claiming that anyone who supports the dies of some debate you don’t support is in league with a sinister and all-encompassing evil.

I’ve received emails–many emails–from my blog posts about GM foods, asking me how much money Monsanto is paying me to write them. 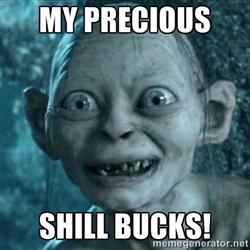 The idea Monsanto has paid off all the world’s scientists to engage in a vast conspiracy to say GMOs are safe when they’re really not is so absurd as to be farcical. Look, ExxonMobil is enormous compared to Monsanto, and with their vast piles of money they can’t pay off all the world’s scientists to say global warming isn’t a thing! If ExxonMobil can’t afford to pay off scientists, how can a company that makes less money than Whole Foods?

Now if you’ll excise me, I’m off to buy another Lamborghini with the shill bucks Monsanto just paid me.