So there we were, in the middle of the California desert, atop a mountain at 8500 feet where the sun was so brutal it burned us through our clothing and the air was so thin that walking a dozen yards meant sitting down to rest, surrounded by the ruins of cutting edge Victorian technology…

But maybe I should back up a little.

It all happened because emanix is an artist, and land in Britain is scarce and expensive.

The part about her being an artist is important because she conceived an idea for a graphic novel and decided to embark on the arduous process of birthing that idea into a real thing. And the part about land being scarce in the United Kingdom? There are no ghost towns there. People don’t pack up and abandon entire cities, leaving them to crumble quietly into dust.

But I’m getting ahead of myself again.

So, the graphic novel. It’s set in a ghost town, you see. And ghost towns, well, they’re as thin on the ground where she lives as snowmen in the Philippines.

So it came to pass that she flew across the pond to Portland, and we set out to tour the many and varied ghost towns of the western United States. For background research, you see. We would, we thought, spend a few weeks living in the back of a camper van–tax-deductible, of course–surveying and photographing abandoned towns for the sake of making art.

That was the extent of our cunning plan…more a cunning intention, really. We are chaosbunnies, she and I. One does not become a chaosbunny by forming a plan and sticking to it.

I did some research, by which I mean I typed “ghost towns” into Google and typed the result into Google Maps. It chewed for a while, an enormous massive parallel supercomputer bending some small part of its mighty attention to the task of drawing dotted lines on a map of the western United States. We piled our suitcases into the van and we were off…

…to a Wal-Mart to get supplies and an oil change. Then we were off…

…to the Wal-Mart parking lot, to meet my sweetie zaiah, who had realized I’d forgotten my jacket and kindly ran it out to me. Then we were off…

…and realized we’d nearly forgotten ice for the cooler. That taken care of, we were off, on a three-week adventure that would take us nearly 4,000 miles, across narrow dirt trails winding high into the mountains and through trackless expanses of Forest Service land, looking for places where people had once lived and didn’t any more.

The thing that worried me the most was the shovel. We’d packed a shovel, emanix and I, because she felt there might be an occasion during which we might have to poop in a hole. I’ve never quite got the hand of pooping in the hole. To be honest, I tend to regard the process with some suspicion, not to mention a fair degree of horror.

Minor reservations about the shovel aside, we set off with boundless optimism to venture into the desert, just the two of us and a 22-year-old van, bunny ears perched jauntily upon our heads. 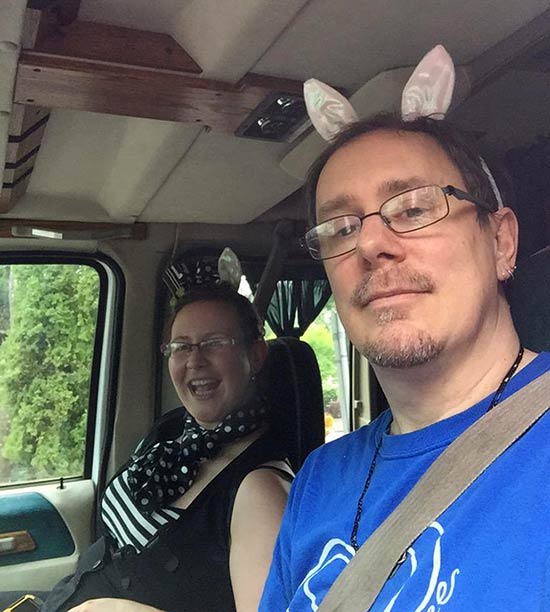 The ears I’m wearing are new, a gift from emanix to replace the previous set she gave me some five or six years ago, and which, after accompanying me on countless adventures across the globe, have become somewhat shabby and dilapidated for the wear. Shabby bunny ears are a sad thing, but everyday, around-town ears are surprisingly difficult to come by.

The first leg of our plan intention had us traveling through Washington, exploring a number of old mining towns throughout the state. 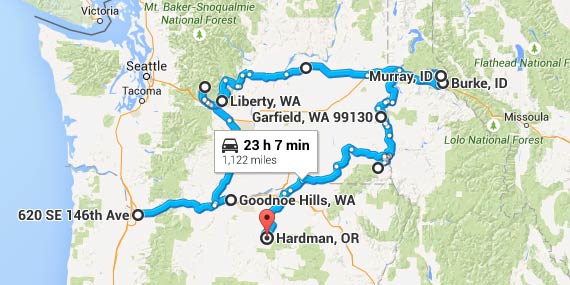 We pulled into the Scenic Winds Motel… 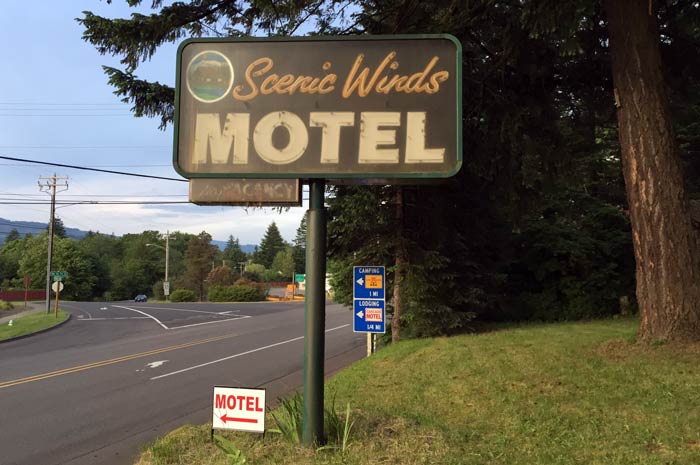 …and immediately realized that, entirely by accident, we’d started our trip in a ghost motel. 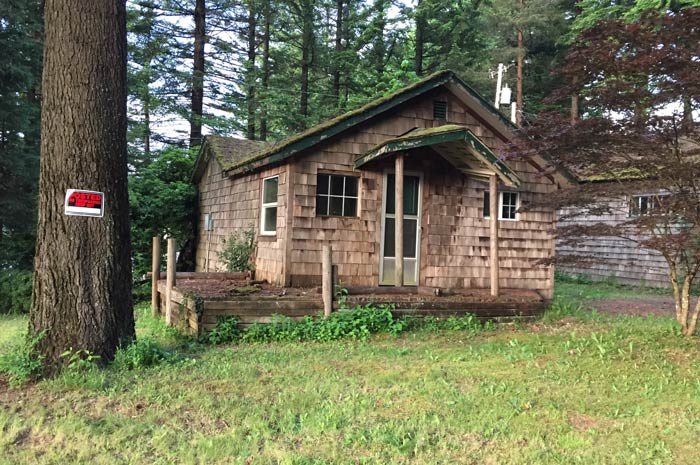 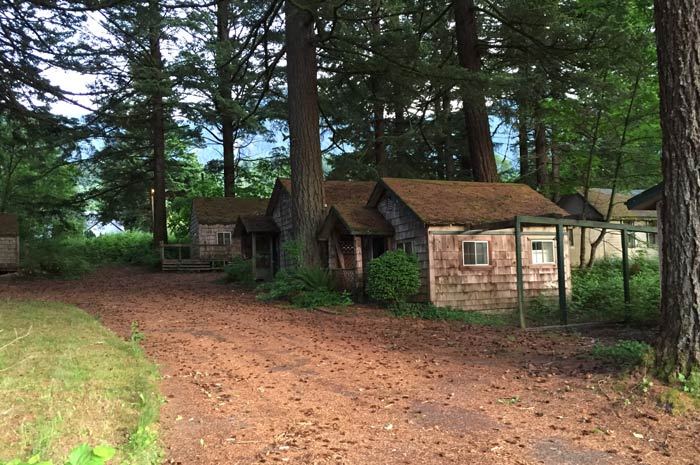 Even Norman Bates might have some reluctance to check in here. 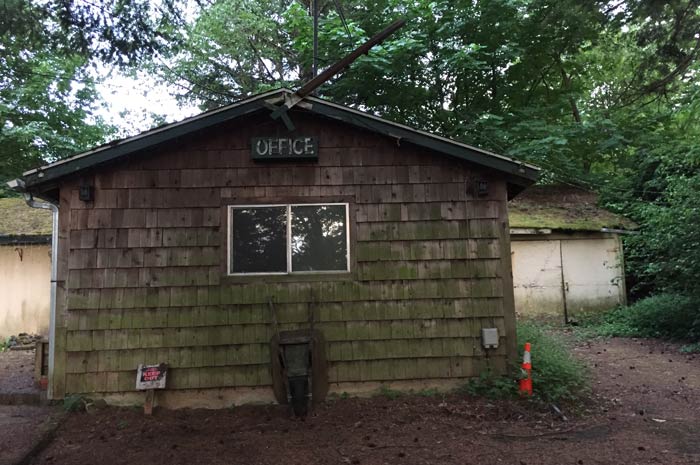 Sadly, we couldn’t actually camp here, as the proximity to the road and the rather forbidding “no trespassing” signs would, we thought, attract the attention of law enforcement, who are notorious for the absence of their sense of irony.

So we spent the night in a motel that wasn’t abandoned, and set off bright and early on the first leg of our tour.

We did actually make the first stop on our planned itinerary, at Goodnoe Hills, Washington. The Internet assured us this town, first established in the 1860s and abandoned soon thereafter, would be a productive stop. We arrived, ears still jaunty, just in time to be underwhelmed. 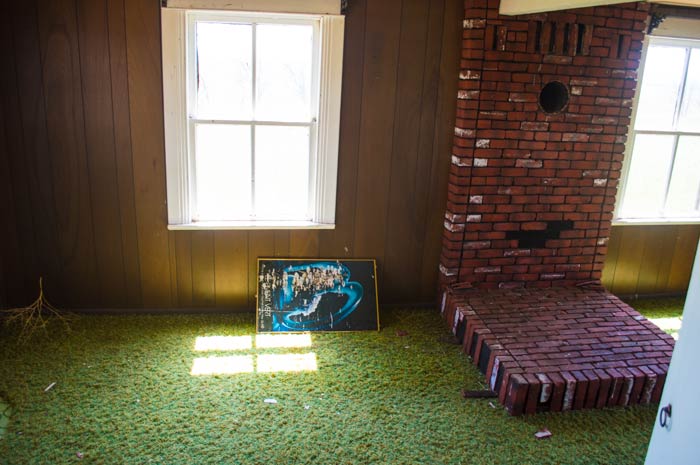 There was an astonishing number of birds living in a bedroom on the second floor, and the quantity of guano was something that had to be seen to be believed. Seriously. I will see it in my nightmares for decades to come. 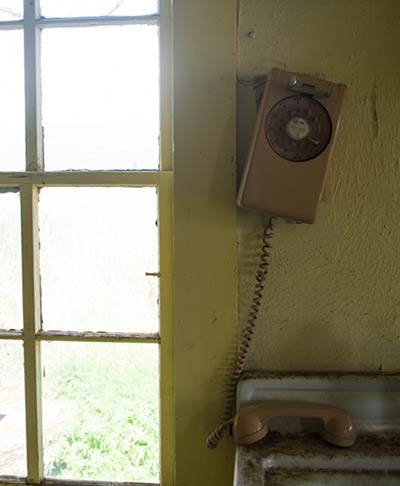 Cool, in its own ghastly way, but definitely not what we were looking for.

We had a bit better luck a few blocks down the road, for some loose definition of “blocks.” We found the ruins of a lovely old church, gradually crumbling into the dusty ground. 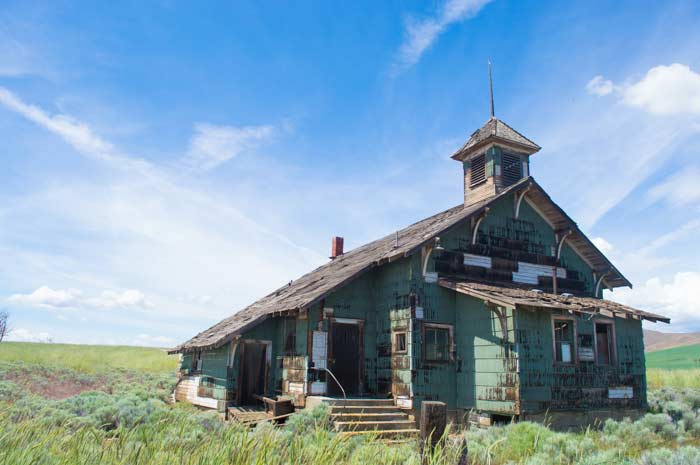 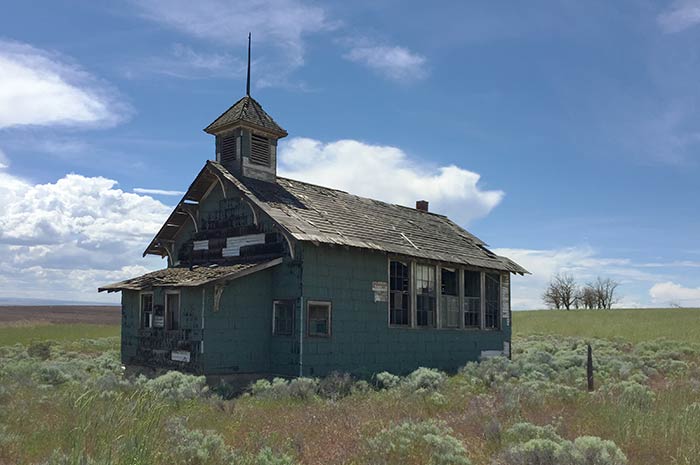 We weren’t able to get inside; the church was surrounded by a barbed-wire fence with dire “no trespassing” signs plastered all over it.

Still, it was quite lovely.

A bit further on, we encountered this place. Now this, we thought, was cooking with fire. This was a proper ruin, just the sort of thing we were hoping to find. 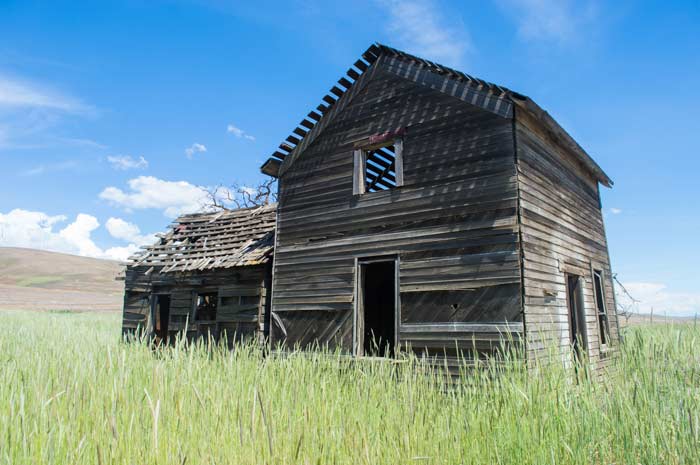 Overall, though, Goodnoe was a bit of a wash. The locals had destroyed most of the remnants of the old town and set down farms where the buildings once stood.

This would turn out to be a recurring theme in the early part of our ghost town adventures, until we figured out a new strategy that necessitated abandoning our original plan altogether.

But that’s a story for the next chapter.

8 thoughts on “Two Chaosbunnies in the Desert: The Beginning”