As I mentioned in WLAMF no. 4, Eve and I visited Salt Lake City on our book tour. The tour feels like it happened years ago, even though it ended, what, last month or something? Time does funny things when you upend your life and start down an entirely new path.

Anyway, while we were there, we visited the Mormon temple, because hey! polyamory authors wearing cute animal ears in Salt Lake City! What else would we do, right? 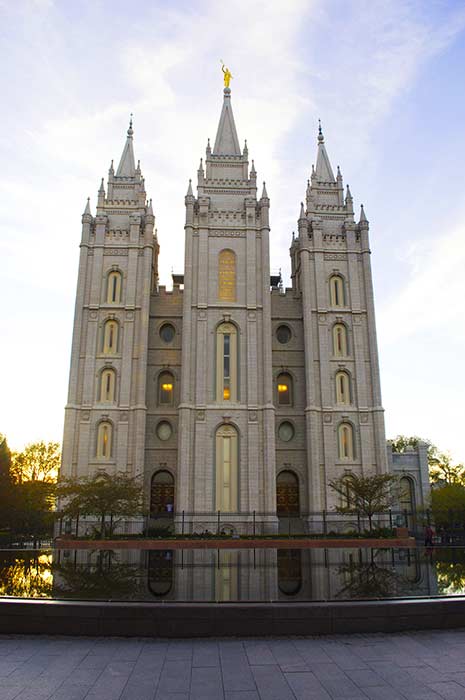 We were kept under the watchful eye of security the entire time, but they were polite about it and let us take pictures.

The Mormon temple is awesome. And I mean that in the literal, old-fashioned sense of the word, not in the modern, Bill and Ted’s Excellent Adventure sense of the word. It is a structure designed and built with the intention of evoking a sense of awe. It is emotion in architecture, every aspect carefully crafted to manipulate the emotions of those who see it.

It’s a bit ironic, really, that human beings can design and build a structure whose design is intended to make other human beings believe they are part of something greater than humanity.

I have always harbored a deep distrust of houses of worship built on such a grandiose scale. The walls of the temple are covered with huge squares of marble, the cost of each one of which would probably feed a dozen needy families for six months. The grounds are that specific kind of lovely that you can only get through hundreds of thousands of dollars’ worth of gardening, all carefully watered every day in this, a place in the center of the desert.

Folks like to talk about Madison Avenue, the epicenter of modern marketing and advertising, as a cynical and soulless machine of mass manipulation. And yet, and yet, I’ve never met an advertiser whose talent can compare in even the feeblest way to that of the architect of religious edifices. This structure is manipulation, every line and every ornament tasked to the goal of making you feel something when you see it. A lot of this building is, in a utilitarian sense, wasted space; it is designed to an end other than efficiency.

Sure is pretty, though, isn’t it?