Late in the evening, we arrived in Salt Lake City at Claire’s friend’s house. I was a bit afraid that I’d have difficulty sleeping, as my ear was…

Okay, I need to back up a bit, to the day before we left, and explain something about my relationship life.

I live with zaiah. She and I share a very kinky relationship, in which various forms of consent play and consensual non-consent play a large role. Large enough, in fact, that I think we sometimes frighten some of our friends…and nearly all our friends are kinky, too. You might think this has little to do with traveling to Boston, and you’d be right, except for the thing with the ear.

It started while I was on my computer chatting with a friend of mine, who like Claire is also whip-smart and knowledgeable and courageous and generally sexy as hell. (This is, as some of my readers might recognize, a common feature in my life. I really dig smart, strong women who aren’t afraid to make unconventional choices. But I digress.)

Anyway, while I was occupied with my chat window, zaiah walked up to me, set a bottle of alcohol on the corner of my computer desk, and walked away. A minute later, she walked back, set a pair of latex gloves on the desk, and walked away. A minute after that, she walked back holding a needle. She put on the gloves, opened the needle, put her knee in my chest, pushed me back in my chair, and stuck the needle through my ear. That done (and howling subsided), she cleaned my ear with alcohol (more howling), and stuck an earring through the newly-minted hole and walked away again.

I had to explain to the friend I’d been chatting with why I’d stopped responding for a time, which led to some interesting conversation. The real point here is that I would be sleeping in strange places with a brand-new, and still sore, piercing. I normally sleep on my left side, and zaiah had (naturally) added the new hole to my left ear, so…yeah. I was expecting a difficult night of sleeping on the wrong side.

Claire’s friend lives, as I previously mentioned, in a former Mormon polygamous compound that’s been converted into apartments. Each apartment is basically a series of bedrooms arranged around the outside of a central living room, connected to a huge kitchen–a quite serviceable floor plan if one has a number of wives who may not necessarily be too fond of one another, but all of whom are expected to spend their time in the kitchen when they aren’t raising children or on their backs making more.

I managed to survive a harrowing night of sleeping on the wrong side (the wrong side!), mostly by telling myself that when one is traveling the breadth of a continent, there are certain privations one is expected to endure. In the morning we were off adventuring again.

When one is traveling across Utah, a certain sameness begins to set in. Most of the scenery looks like this: 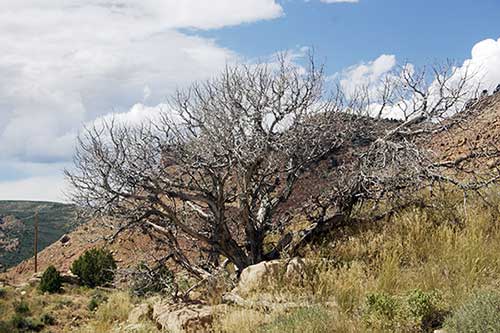 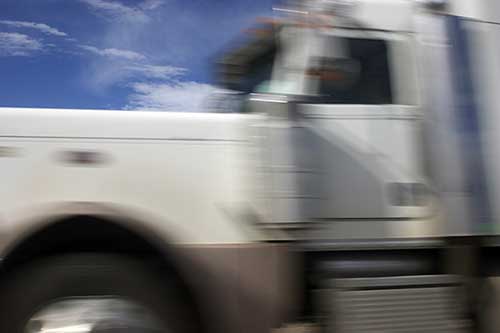 After a certain number of bare-knuckle close calls with enormous tractor-trailer rigs being driven at lightning speed along narrow roads by people who are either five-eights asleep or hopped up on a combination of crystal meth, cocaine, and Monster energy drinks, the experience ceases to enthrall, and one soon finds one’s self thinking “Wake me when something interesting happens.”

So it was that we made our way through Utah and into Colorado, which is just as dry but a lot less wrinkly.

Claire had been waxing enthusiastically about the hot springs in Glenwood for some time prior to the trip. Now, ordinarily, water is something I’m pretty much against. I mean, I recognize its utility and all; it is, after all, the primary ingredient in Mountain Dew. But immersion in it is something I don’t much fancy, especially when it’s hot.

However, life in Oregon has been a period of transition for me. I have, since moving here, found myself in a hot tub on no fewer than two occasions, largely at rekre8‘s urging. “Give it a try!” she told me. “It’s not as bad as all that!”

So when we arrived in Glenwood in the evening, I was game to give this “hot springs” thing a go.

I wasn’t quite sure what to expect. When I heard the phrase “hot springs,” as in “we’re going to stop at the hot springs and immerse ourselves in them,” the image that was conjured up in my mind looked something like this: 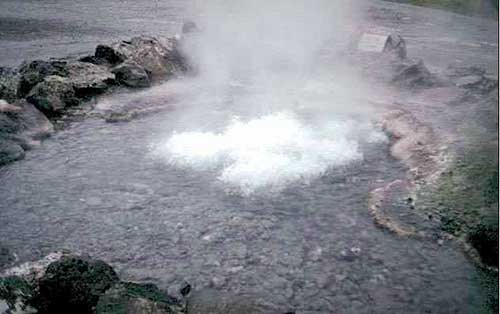 though to be perfectly fair, this picture is lacking in the human skeletons my imagination had thoughtfully arranged to provide scattered all around the edge of the springs as a warning to those luckless enough to linger in them too long.

What I actually saw was this: 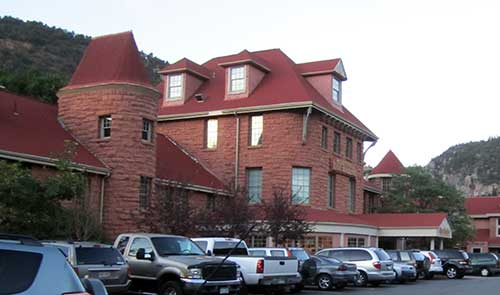 The principle behind a hot spring is quite simple. Millions of tons of molten rock, heated to fantastic temperatures by intense radioactive decay deep within the earth, forces itself under tremendous pressure through miles and miles of solid rock, until finally it comes near enough to the surface to contact water percolating down through porous substrate. When they meet, the water flashes instantaneously into superheated steam, which blasts up with ferocious energy to the surface, where it…

…manages to feel quite pleasant, really.

The hot springs were surprisingly enjoyable. And I don’t mean that in the “it was surprising any part of the experience was enjoyable at all” sense, but rather in the “I had quite a wonderful time” sense. In fact, all too soon was it time to be off on our way to Denver, where we stayed with another friend of Claire’s.

Or so it is alleged.

We didn’t see hide nor hair of this friend. We arrived at a lovely house in a charming suburb of Denver quite late at night. Claire claimed to have been in contact with her friends, who had, or so the story went, elected to go to bed after leaving a key for us on the porch. We let ourselves in and set ourselves up in the supposedly “spare” bedrooms. The next morning, Claire announced that her fiends had left for work early that morning, so we would not be meeting them.

To this day, I have no way to prove that what actually happened wasn’t that she had scoped out a house whose owners were away on vacation or something, and confabulated an entire yarn about friends of hers who live in Denver as part of a ruse to make us agree to a little breaking and entering.

At this point in our adventure, Louisville, Kentucky, and our encounter there with the Guatemalans, was growing ever nearer..but that tale will have to wait for another time.

2 thoughts on “Boston Episode 2: To Utah And Beyond!”