If the key to success is in making the best of what you’ve got, Gdańsk is brilliantly successful. They have, in fact, built their entire tourist trade, as near as I can tell, out of their frightening history and fossilized tree resin.

Shortly beyond the bronze statue of the dude trampling a cannon while holding a long, hard staff with a knob at the end, we located some street signs in English, always a good sign when you’re looking for a tourist attraction. The signs advertised the Torture Chamber and Amber Museum. 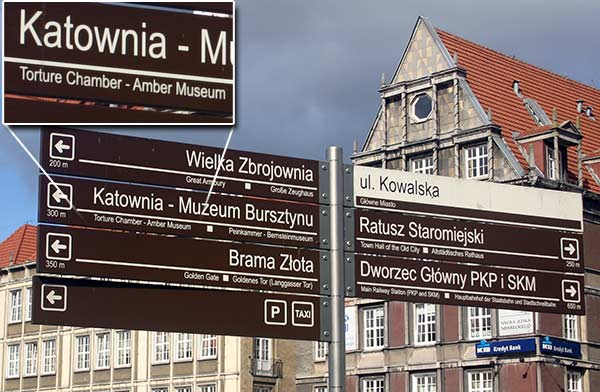 The Poles are, unquestionably, historical leaders in the fields of both torture and amber, so if they say that a torture chamber and an amber museum belong together, I’m inclined to believe them. In fact, when the dungeon here at home is finally finished, I think it may be necessary to include a display of amber of some kind, or perhaps to put someone named Amber on display in it.

I find it interesting that in Polish, “torture chamber” appears to be one word. Score one for linguistic efficiency!

On any vacation, you really can’t get enough torture chambers for my entertainment dollar, so the offer of a torture chamber and an amber museum was too good to pass up. We headed off in the indicated direction, and soon found the promised torture chamber. 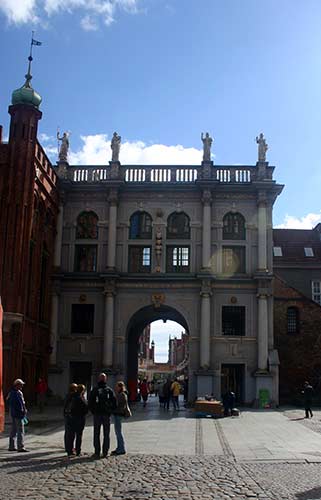 The archway, through which Im sure many a soul was dragged kicking and screaming, marks the entrance to both the torture chamber and to the Old Town district of Gdańsk. I’m not entirely convinced their spacial proximity is completely by accident.

We tried to hit up the torture chamber first, but it was closed until later in the afternoon. The courtyard seemed designed for maximum oppressive effect: 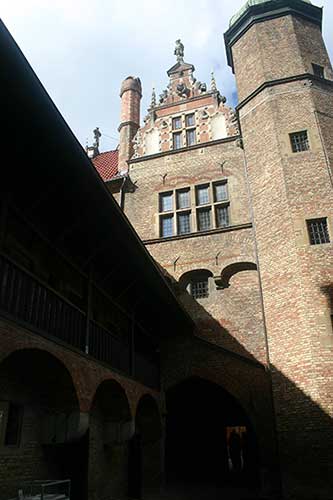 I like a thoughtful, carefully-designed torture chamber, myself. One that shows the designers were really focused on detail. It shows a level of commitment to the craft that’s becoming more and more rare in our modern era. Today, the CIA might torture a suspected insurgent in an abandoned warehouse in Cairo, but back in the day, the people of Gdańsk paid a great deal of attention to the artistry of interrogation.

Little touches, like these iron shackles attached to a bar in the courtyard, count for a lot in a torture chamber. 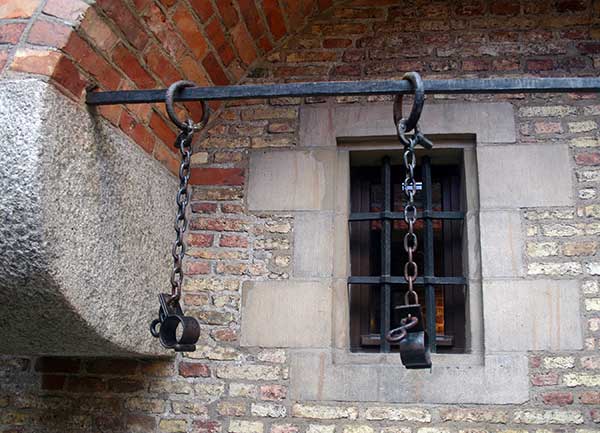 I especially like that the shackles can slide along the iron bar, giving the person chained here the illusion that freedom might be at hand. I might just lift this idea for my own dungeon, once the remodeling is complete.

And what torture chamber can really be said to be complete without an oubliette? 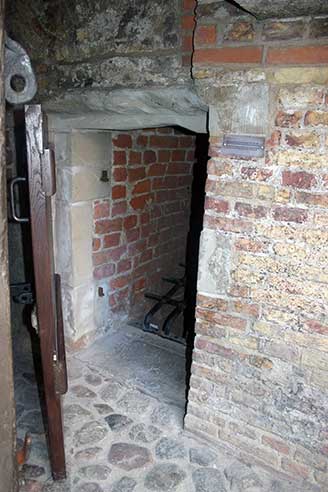 Some folks might say that using both an iron grate over the shaft leading down into the oubliette AND a heavy oak door that can be barred shut is overkill, but I think it shows commitment. This detail-focused, spare-no-expense approach to torture chamber architecture is something we could all learn from.

While we waited for the torture chamber to open, a couple of guys tried, in broken English, to rent us a golf cart. I’m not quite sure what the idea behind that was, nor why they felt that a golf cart was what we needed to make our day complete, though I’m sure that successfully renting it to us might’ve helped to make their day complete. Perhaps that’s all there was to it.

Gdańsk is, or so it’s claimed, one of the world’s leading producers and exporters of Baltic amber. And they make the most amazing things from it.

By “amazing,” I actually mean “creepy.” 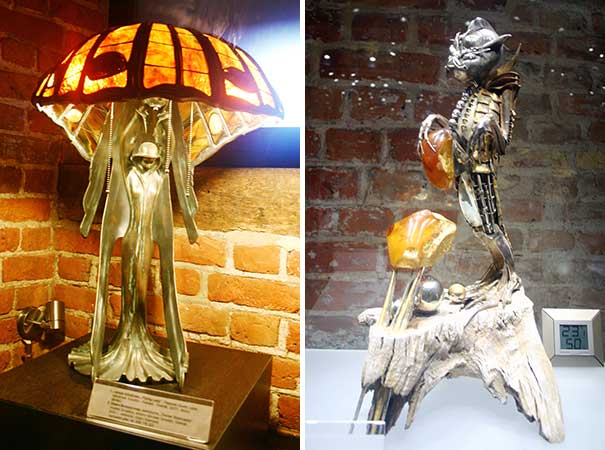 The guy in the lamp on the left looks like he came from a Roger Zelazny book by way of a World of Warcraft boss in Icecrown Citadel.

I’m not actually sure the thing on the right is really a sculpture. It looks more like a homage to our new insectile space alien overlords, with the digital counter in the background counting down the days until they arrive to sweep the world clean of the unworthy and elevate the worthy to new heights of wickedness, or perhaps plant their eggs within the bodies of the unwary, or something. I won’t claim to be an expert on the subject of alien invasion, but my study of Hollywood movies has led me to believe that those are generally what one can expect after the arrival of insectile alien overlords. 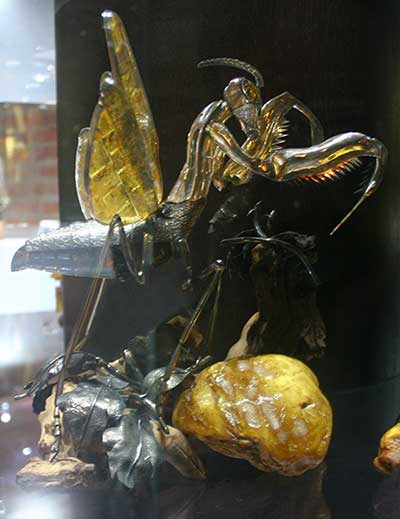 The insectile theme is a popular one with the amber artisans of Gdańsk. According to various display signs posted throughout the torture chamber, the early Polish apothecaries believed amber to be infused with all sorts of magical properties, which careful research and the application of various potions to the raw essence of amber could bring out.

I actually suspect, looking at this thing, that it’s no accident amber and torture are so intimately entwined in the annals of Polish lore. It is my belief that the prisoners brought to this place were made, under the exhortation of scourge and chain, to craft small sculptures like this very one. Then, by the application of the alchemical processes, these sculptures would be brought to a kind of hideous life, whereupon they would be applied to the bare flesh of the condemned, to feast upon it in a ritual of agony until the prisoner broke and revealed all he knew. It was thought that by crafting the instrument of his own affliction, the prisoner could more readily be brought to reason, where “reason” was loosely defined as “saying whatever we want him to say.”

These apothecaries of amber are now all long gone, and the unholy secrets they coaxed from the brittle tree resin have gone with them.

Some believe, though, that they have not departed forever, but have merely perfected their dark arts to such an extent that they were able to preserve themselves perfectly within sarcophagi of mystically-charged amber, and so sleep a dreamless slumber, awaiting the day when they may return to welcome the arrival of our new insectile overlords, brought to us not from the stars but from the cunning craft of amber and metals, our destinies wrought with our own hands.

12 thoughts on “Adventures in Europe, Chapter 19: Torture and amber, living in perfect harm-oh-NEE!”