Back in the days when I used to work in pre-press professionally, there was one job I used to do every year that’d consume a month or two of my life, which was the cruise catalog for Royal Caribbean. The catalog was gorgeously produced–printed in CMYK plus two spot colors plus two metallic colors, with hundreds of pictures (all massively retouched).

The text for the catalog was printed separately from the rest of the catalog, so that they could print up a bunch of them and then decide how many to produce in each of the dozen or so languages they’re available in. US English, UK English, French, German, Greek, Hebrew, Arabic…

The Arabic versions were the trickiest. 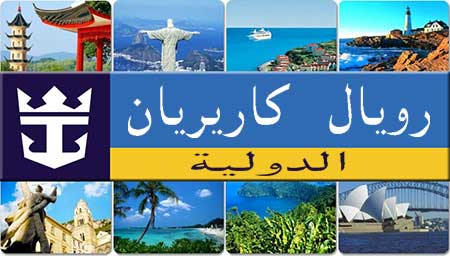 For the Arabic version, Royal Caribbean would run the book through the press again and print black squares over anything that the Middle Easterners would find upsetting. It was my job to go through every photo in the catalog and put little black squares over every building or object that represented any non-Muslim religion–church steeples, crosses, you name it. I also was required to draw a black outline over any woman shown in any photograph and fill her in as a solid black silhouette, and to black out any part of any picture that showed an alcoholic beverage or any form of gambling.

Now, there are a LOT of churches in the world, especially in Eastern Europe and the Mediterranean.

After Tallinn, our next port of call was Poland, which seems, in the overall scope of history, to be a largely fictional country. We dropped anchor in the town of Gdynia, adjacent to Gdańsk in Gdańsk Bay and apparently the only port that could accommodate a hotel of our size.

This is the skyline of Gdynia, as seen from the port.

And here is the skyline as it would appear in the Arabic version of the Royal Caribbean cruise catalog.

There’s a lot of non-Muslim stuff in the world, and it seems there are folks for whom that’s most definitely not OK. I have great confidence, though, that right here in the US, Christian groups are working hard to become just as easily offended and sensitive as Saudi Arabia, and so to close the Sensitivity Gap that exists between our nations.

Gdynia is both a working town and a military port. Now, I know what you’re thinking: “Poland has a military?” I thought the same thing myself. Like, when did that happen? Does the rest of the world know? Is it made of Legos?

As we were making harbor at Gdynia, I saw at least a dozen military ships, including destroyers (who uses those any more?), transports, and even a missile launcher. 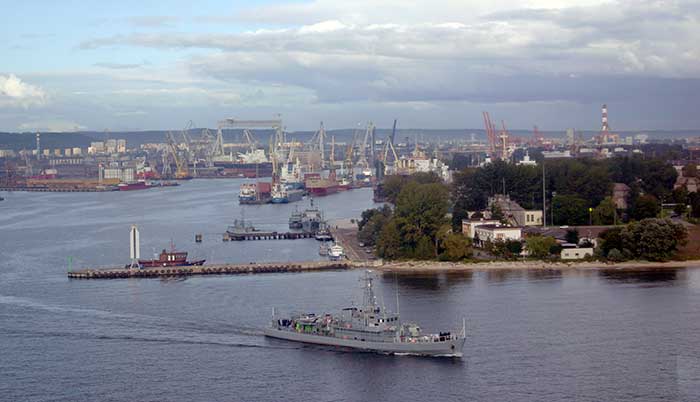 Now, just one first-world aircraft carrier and its battle group could probably wipe out Poland’s navy in about…oh, fifteen minutes or so, but hey, if 1942 ever invades them, by golly, they’ll be ready!

The port of Gdynia offers the casual tourist much more of what we all have come to expect of Eastern Europe than most of the rest of Eastern Europe does: big machinery clawing its way over twisted scrap metal, surrounded by the ruins of civilization. There’s actually a scrapyard right there in the port! 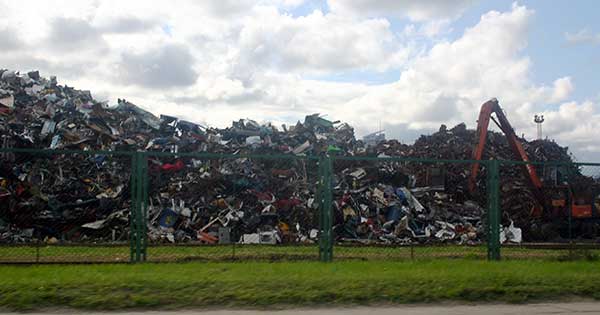 And I love these cranes. Big industrial equipment is beautiful. I can just picture these things rising from their moorings and rampaging across the countryside, destroying all fleshy life in their path with their swinging steel balls. I know which side I’ll be on when the Rise fo the machines comes to pass… 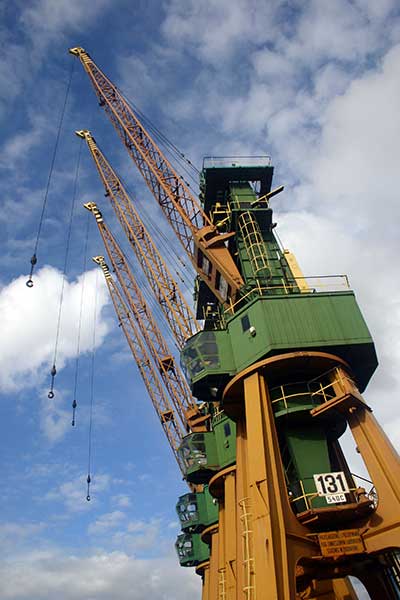 We actually wanted to visit the town of Gdańsk, which is about 40 minutes by taxi or train from Gdynia. A line of taxis waited at the port, but none of the cab drivers actually spoke English, which led to an amusing misunderstanding that could easily have been taken straight from an episode of Friends:

The astute reader can probably figure out what happened next. It came as a bit of a surprise to the rest of my family, though.

He did exactly as he’d been told, or at least exactly as he thought he’d been told, which was to take us to the train station in Gdańsk. The trip itself, through the suburbs of Gdynia and the surrounding countryside was (I though) a lot of fun and (my father thought) was absolutely terrifying. Polish cabbies have, it seems, only an abstract and theoretical grasp of the traffic laws, and indeed of universal laws of physics, which worked out to our advantage, as he was able to hurtle through time and space at least twelve times faster than any reasonable person might have thought prudent, or even possible, for that matter.

Later, my father would say that he’d never been so terrified in all his life. Now, me, I’ve had scarier experiences in bed, and I’ll be talking about those later, when I get to the France portion of this travelogue…but I digress.

The train station in Gdańsk is quite lovely. 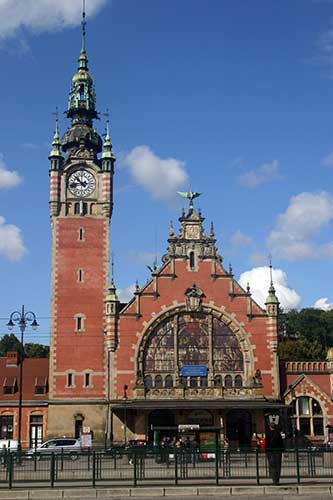 There were, however, no people anywhere about who spoke English. It was quite uncanny; you’d almost think we were in a foreign country or something. This caused no small amount of consternation when it came to mapping a route to explore the city, though we were eventually able to muddle it through by resorting to the “find something that looks interesting and head in that direction” technique.

Gdańsk was blanketed in movie posters for The Last Airbender: 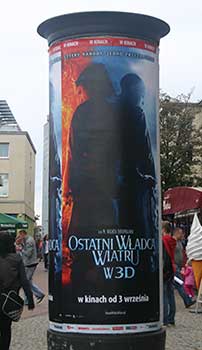 I wonder if the movie sucks any less in Polish.

I have often heard that travel to foreign lands is a great way to learn about the various traditions and customs that differ from those in one’s homeland. Travel, they say, broadens the mind.

Take commerce, for example. Now, if you’re going to engage in commerce, there are certain tools that you need for the job. Cash registers are useful, for instance. If you want to zap documents around instantly, as if by magic, a fax machine is good to have.

But within these common necessities lie significant cultural differences. Whereas an American office might have a neon “Open” sign or a portable PIN reader for debit cards, businesses in Poland, apparently, might find it useful to have a weasel or a badger on the counter. And fear not! You can, it would seem, get these things at any office supply store in Gdańsk.

I hear you can get the badgers with BlueTooth.

On our way toward the Old Town district of Gdańsk, about which I shall write more later, we passed this statue: 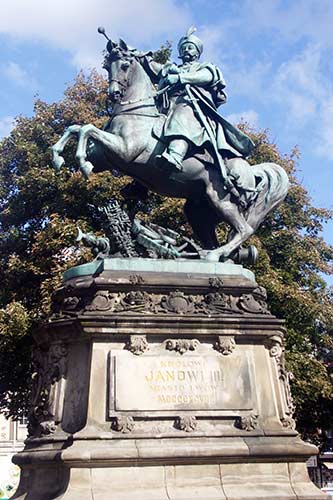 One of the more interesting things about Gdańsk is its British influences, most likely the result of its close cultural ties with the United Kingdom. Why, you can even see it in the graffiti! 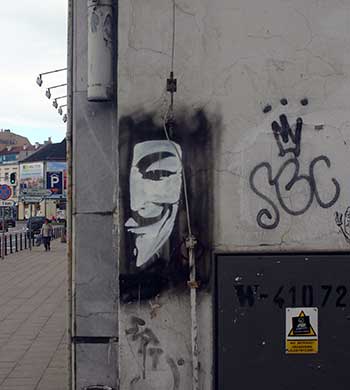 Not very many people know the central role that Poland played in the Gunpowder Plot. When Guy Fawkes decided that blowing hundreds of people sky-high with a gigantic bomb in remembrance of God’s Divine Mercy was a legitimate form of religious expression–an idea he wasn’t the first to conceive, and which remains in considerable vogue among people of all stripes today–he first traveled to Poland, where he attempted to buy enriched uranium from a shadowy Iranian figure whose name is not recorded in the annals of history.

When this attempt failed, thanks to the meddling of a bunch of teenagers and a dog in a van, he was forced as a last resort to use gunpowder, which he ordered in bulk from several mail-order houses under an assumed name. This proved his undoing, as we all well know, as the invoices were provided to His Majesty King James the Psychotic Bastard by the houses in question.

Nevertheless, to this very day, Poland’s support of Guy Fawkes’ noble services to the Catholic church is still remembered, which is why when the time came to choose a new Pope in 1978, the Catholic College of Cardinals finally saw fit to recognize Poland’s service, failed though it was, by elevating one of her citizens to Pontiff.

And speaking of the Catholic Church in Rome, we walked by a cathedral with this rather magnificent door in downtown Gdańsk. 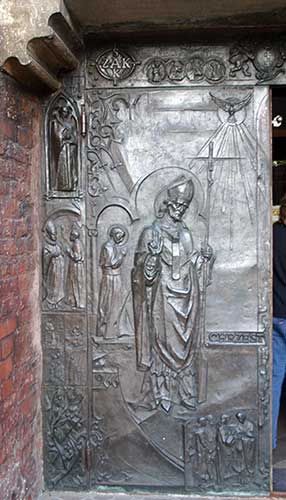 Most people know that the Catholic Church is actually comprised of several different, but affiliated, branches of religious orthodoxy. The two best-known of these are the Latin Rite, which makes up most of the churches in the West, and the affiliated Eastern Catholic Churches, which make up many of the remainder in, naturally, the East.

This particular church belongs to the Congregation of the Han, whose sacred traditions extend back to 1977. Catholic churches belonging to this particular twig of knowledge on the Tree of Truth hold as sacred the Passion of Han Solo, which they believe parallels the passion of the Christ, especially as he was frozen in carbonite by the forces of evil and then, later, was resurrected to lead the people to grace. Churches in this tradition often construct the cathedral doors from solid carbonite, into which they place the bishop of the local synod and several assorted village children, in the hopes that one day they, too, will follow in the footsteps of Saint Solo.

A significant rift has occurred within the various churches of this tradition, following a new revelation in which, some say, Han Solo would never be the one to fire the first shot in any disagreement. This idea is branded as heresy by others among the pious, and it represents a thorny theological issue in which your humble scribe is reluctant to venture an opinion, lest I too be blown sky-high by a gigantic gunpowder bomb.