Gdańsk is known mostly for its amber and torture chambers. It’s also known for being a cosmic billiard ball in the great international game of pool, with various nation-states and empires and suchlike seeking control of it for various reasons. It’s changed hands more often than a counterfeit dollar bill in a brothel in Saudi Arabia, and has even at various times been a “free and independent city-state under the control of Poland,” whatever the hell that means. It sounds to me like the political equivalent of house arrest, but my grasp of Polish history is, sadly, insufficient to reach the finer points of you’re-independent-but-not-reallydom.

Just beyond the torture chamber and amber museum lies the Gdańsk Old Town, which is prettier but a lot less interesting than Tallinn’s Old Town district. 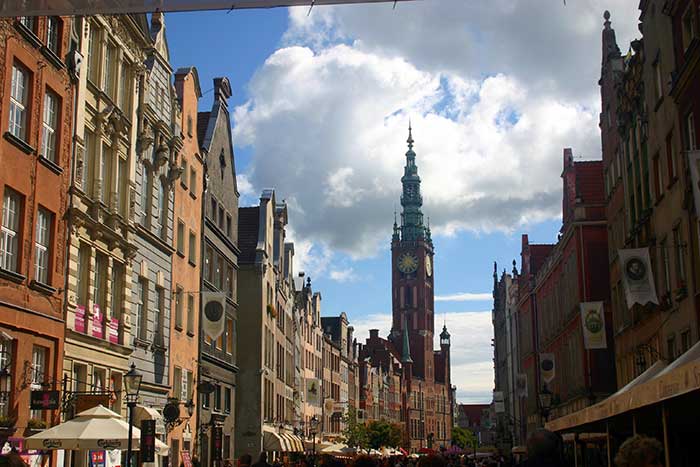 The suspicions were confirmed when we ventured down that suspiciously wide, spacious, and straight street. 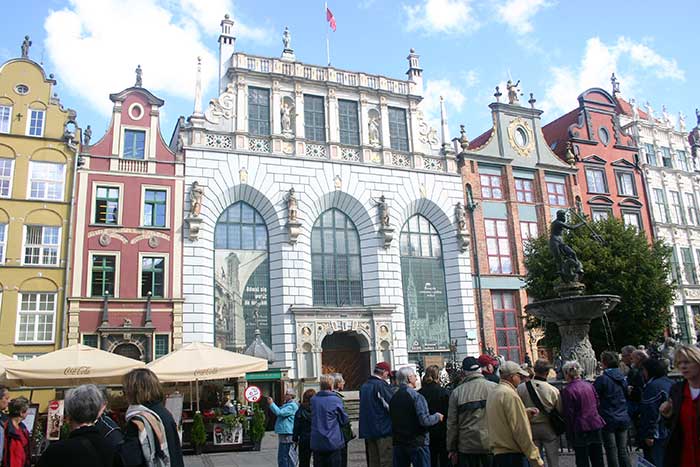 For an ancient Medieval city that traces its roots back to around 900 AD or so, those buildings look awfully clean and bright. I went around behind them–on a route that took me down along the canal district–and sure enough, from the rear those lovely buildings are unpainted, new, and mostly vacant. The whole thing is about like Disney’s Main Street USA, only with fewer rodents of the dancing variety and more of the Black-Death-carrying variety.

In my trek down the canal district, I found this place advertising “In Our Shop Happy Day Half Price.” 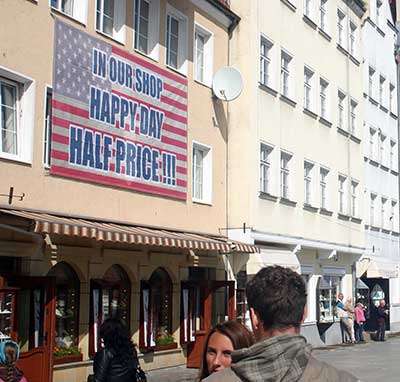 To paraphrase Samuel L. Jackson in his seminal opus “Pulp Fiction,” and with a tip o’ the hat to zaiah: “Engrish, motherfucker! Do you speak it?”

There’s really only one part of the Gdańsk old town that seems genuinely old, the rest having been blown to Hell and gone in the War of 1308, the Thirteen Years’ War, the War of 1569, the Prussian War, World War I, World War II, and the Soviet occupation, and that’s the town hall.

Which, as town halls go, is pretty cool. 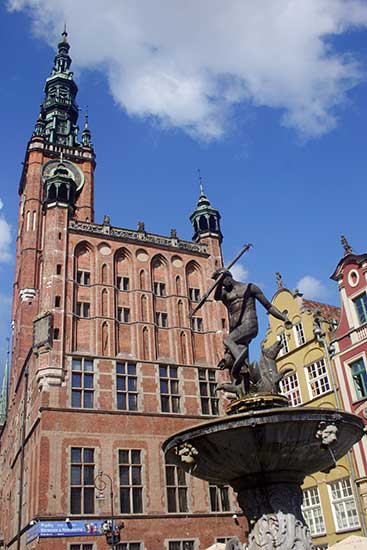 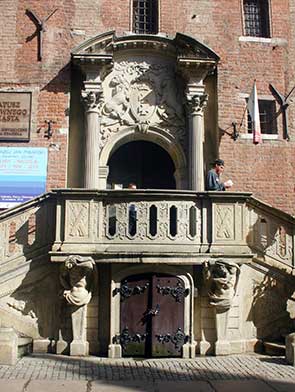 When I rule the earth with my iron fist, my secret lair will have a double-decker arrangement like this. Each door will be guarded by a sentry. One door will lead to the main control center of my lair, and the other to Certain Doom. One sentry will always lie, and the other will always tell the–

Oh, who am I kidding? Both doors will lead to Certain Doom. The actual entrance will be via a long secret tunnel, which comes up in the back storeroom closet of a nondescript Motel 6 a few miles down the road.

Like most town halls, the town hall in Gdańsk features a clock. Or, really, an exuberance of clocks. That’s not the cool part, though. The cool part is that the Gdańsk town hall, unlike lesser town halls in certain OTHER ancient Eastern European cities, is proof against the vagaries of the Clock Keepers and Tinkerers Union, well-known throughout history for holding many a town clock-tower hostage until their unreasoned demands are met. We modern folks with our wearable chronographs and digital time-keeping instruments that sometimes double as miraculous distance-speaking box and scrying oracle sometimes forget how it used to be, but in ancient times, he who controlled the clock in the tower controlled the universe. Without accurate timekeeping, early peasants had no way to know when it was Planting Time, Hymn-Singing Time, Witch-Stoning Time, Running From the Tax Collector Time, or Bending Over to Get Reamed By The Nobles Again Time.

That’s why the architects of Gdansk saw fit to include… 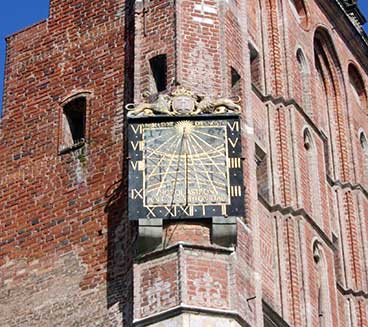 …a motherfucking sundial. On the side of the building. How freaking cool is that?

My secret lair will definitely include a sundial. With lasers or something.

(Footnote: In the interests of full disclosure, I was totally joking about Medieval serfs not knowing what time it was without a clock, by the way. Every time was Bending Over to Get Reamed By The Nobles Again time.)

4 thoughts on “Adventures in Europe, Chapter 20: It’s a small world after all…”