On the way back from Old Town to the cruise ship, I got distracted, as I often do. Just before the Port And Livestock Ranch of Tallinn, about a block away from the ultramodern naked lady sculptures gracing the Tallink Spa and Conference Hotel, I found a wide, decaying flight of stairs climbing up to what looked like a cross between a stadium and a fallout shelter, combined with the post-apocalyptic future nightmare in that one scene from the future in Terminator 2, all in that peculiar type of concrete that seems to start crumbling about fifteen minutes after it’s poured. (As P. J. O’Rourke famously observed, “Commies love concrete, but they don’t know how to make it.”)

Urban decay is my Kryptonite. Well, that and redheaded lesbians. And bacon. And kittens. And goth girls. But urban decay is up there, definitely, and even though my feet were sore and the ship was due to leave soon, I could no more resist checking it out than I can eat just one potato chip. Mmm, potato chips.

From street level, it looks a bit like this. 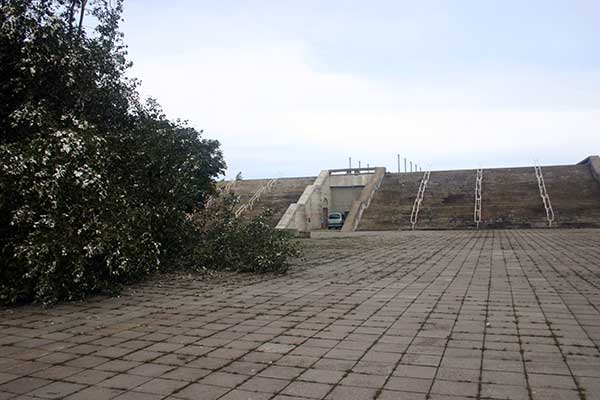 The thing that you can’t tell from this picture, though, is the scale of the size of the bigness of it. It just keeps going and going, on and on, in huge terraces and steps rising far above the landscape and jutting a startling distance into the water.

Above the flight of stairs you see here is a second long landing, this one adorned with rows of steel posts painted in peeling cyan paint, with white balls on top–a sort of Communist tribute to tall, erect poles with knobs on top, all thrusting skyward to commemorate the victory of the working man over the bourgeois elite, or something like that. 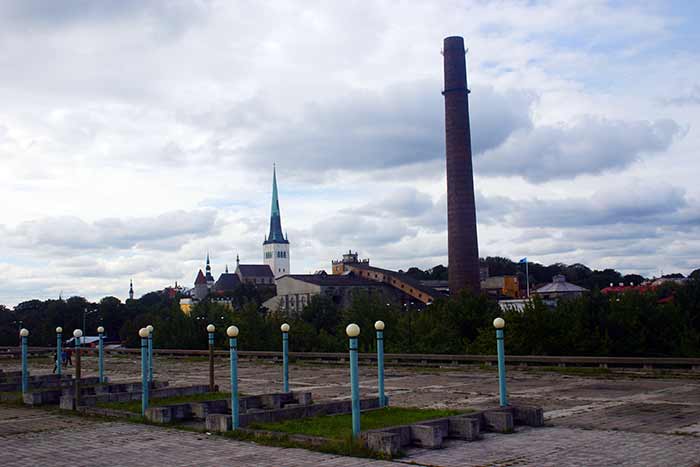 In the background, the spire of the Old Town cathedral rises behind the chimney of an abandoned factory or rock-crushing plant or something that’s slowly crumbling away outside the wall.

This is what I wanted to see in Eastern Europe. Acres of gray concrete surrounding the disintegrating ruins of industrial buildings. You can’t get enough of that for my entertainment dollar.

The Plateau of the Rods and Knobs, which I had mentally taken to calling on it, continues to another level of stairs and another plateau rising ziggurat-like into the air: 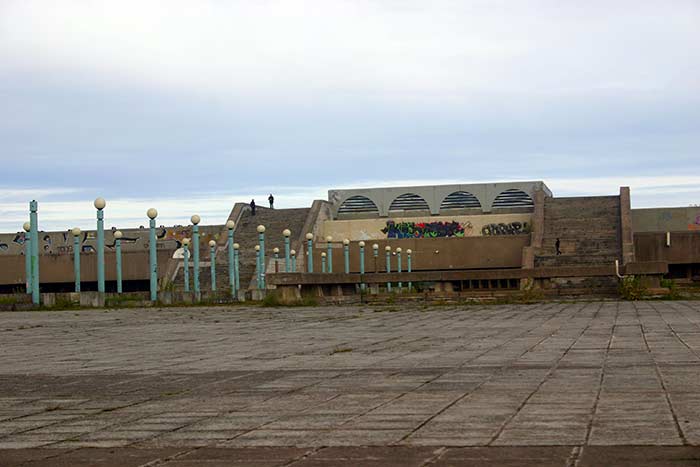 The whole structure is filled with these cutouts that plunge into unexpected rows of doors. Standing at the front edge of the Plateau of Rods and Knobs, atop the stars rising from the street, one finds this: 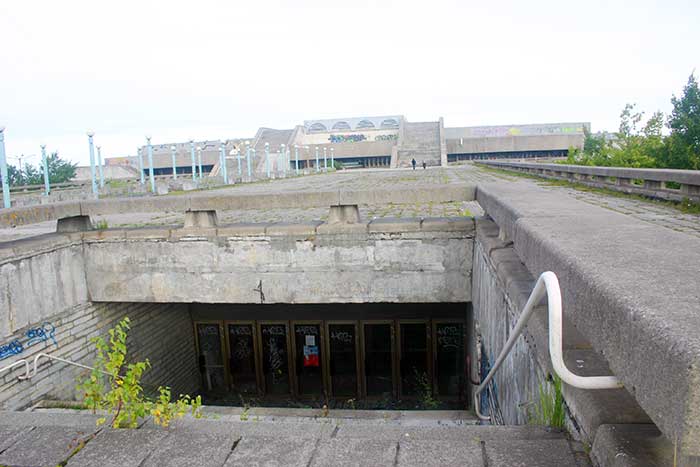 I went down and tried all the doors (they were locked) and looked inside (it was dark). By this point in my tour of Tallinn, I had exhausted my camera’s first battery and the second was nearly spent as well, so I didn’t want to try to use the flash to get a picture of the gloom beyond the doors, for fear that I would not be able to chronicle the rest of this magnificent, exuberant tribute to Soviet-era concrete.

Proceding along toward the other end of the Plateau of Rods and Knobs, and whistling the Terry Pratchett song “A Wizard’s Staff has a Knob on the End” to myself, I encountered another bank of these enigmatic doors. 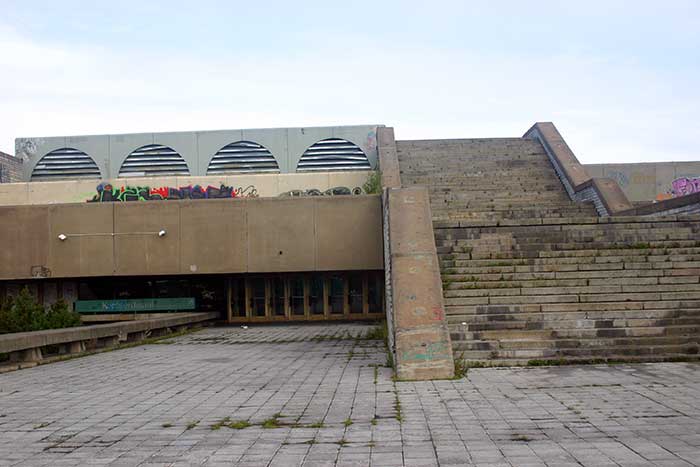 Beneath this row of doors, an unexpected stairwell plunges to a SECOND row of doors into the cavernous ziggurat. 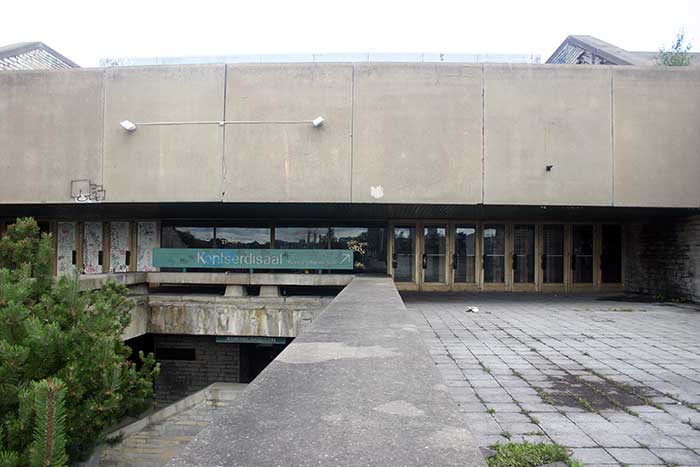 The view from the weed-choked ground surrounding the Rods of the Soviet Worker with their Knobs of Triumph over the Bourgeoise is really striking. 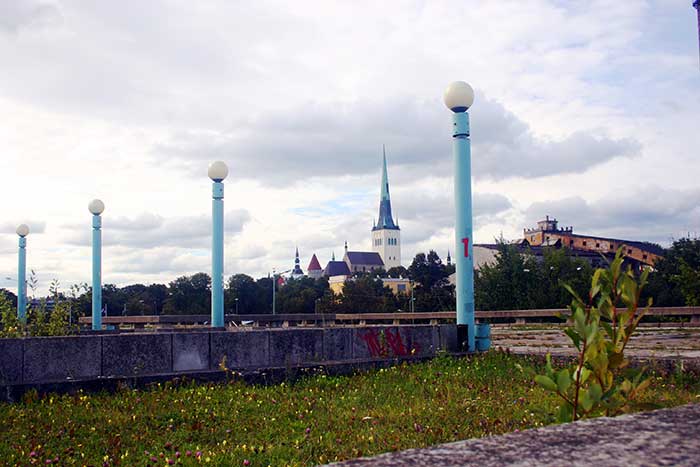 Atop the next flight of steps runs a low concrete wall that has in the years since its erection been decorated with the most amazing graffiti. What’s most amazing about it to me is how graffiti everywhere in the world, even behind the rusted hulk of the former Iron Curtain, looks like it all belongs in New York City. 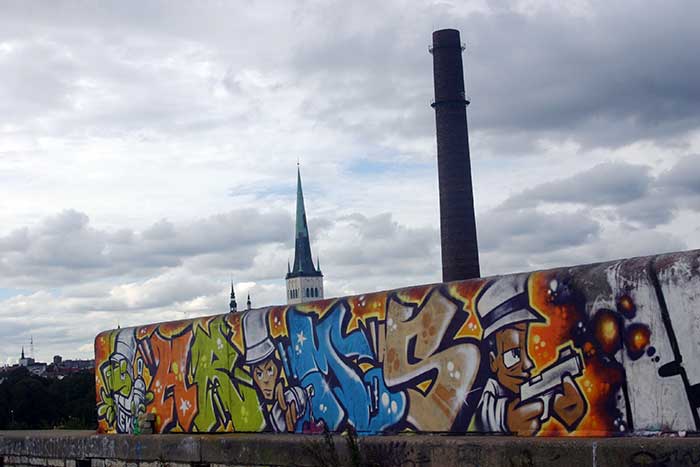 The structure continues out into the water, projecting toward the port like a great gray Stalinist finger of aquatic accusation at the imperious West.

Across from the wall with its Eastern European interpretation of thug-life gangsta art, the view gave a magnificent portrait of our cruise ship, the Star Princess, dwarfing a far lesser cruise ship from Germany. 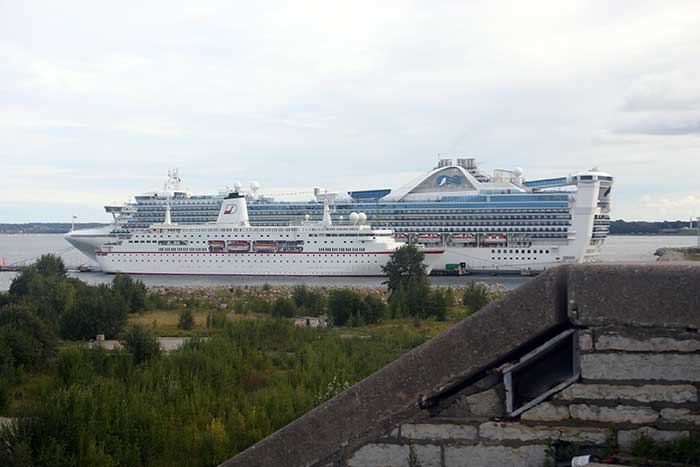 When I got back home, I turned to Google Earth to try to get a sense of what this place was. There’s a great overhead shot of it, that shows the Spa and Convention Hotel just below and to the right, and the berthing for the cruise ships next to the flat grassland that kina sorta makes up the Port of Tallinn. 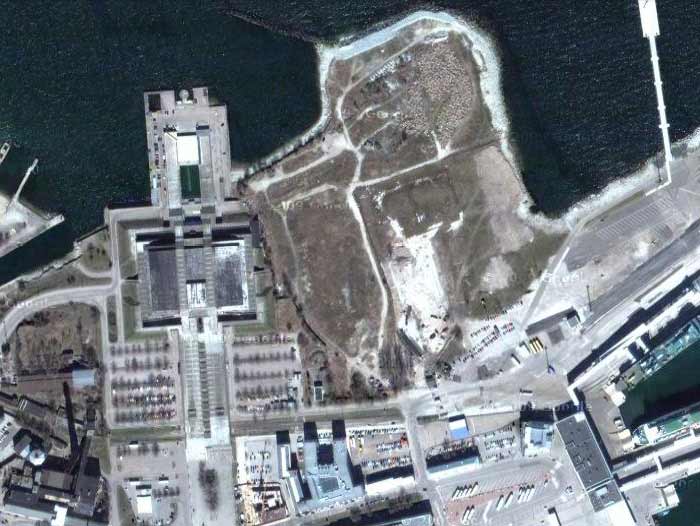 According to Wikipedia, the place is the Tallinn Linnahall, formerly the Vladimir Ilyich Lenin Palace of Culture and Sport, which was built in 1980 to host the Olympic yacht races and renamed some years later after everyone realized what a douchenozzle Lenin was.

I found another Web site that claimed this place was used as a venue for concerts as recently as two years ago. Nowadays, it’d be the perfect place to film movies about the space monster zombie apocalypse.

Apparently, the CEO of Estèe Lauder has been trying for some years to get financing to renovate this place and turn it into, I don’t know, a secret fortified lair or a home for anorexic runway models or a Center For Kids Who Can’t Read Good And Wanna Learn To Do Other Stuff Good Too or some such thing. There was talk about getting the US government to underwrite a loan to do the renovation, on the grounds that the United States has a strategic interest in Soviet-era concrete ziggurats or something, but apparently the government said “Umm, no,” and that was that.

Which is too bad. If I were an evil villain or the CEO of Estèe Lauder, I would totally make this place my lair. It even has a helipad on the end!

4 thoughts on “Adventures in Europe, Chapter 17: The Palace of Culture and Sport”