My visit to the Hermitage museum, formerly the winter residence of Catherine the Great, had left me with the impression that this was a woman of not inconsiderable accomplishment within the general sphere of astonishingly bad taste.

Nearly every part of Catherine’s winter palace is done in the style that modern scholars refer to as “neoclassical tacky,” with finishing details that drew from a wide range of influences such as Gothic Ugly, Baroque Repellent, and Early French Inelegant.

Catherine the First, however, was a woman of no small ambition herself, and was determined to leave an indelible mark on the world of architecture that could never be erased, even with flamethrowers, and would cement her legacy amongst the annals of history. To that end, she commissioned a new summer palace just outside St. Petersburg, which would be nowhere near as small, cramped, or frumpy as the old digs at Peter’s palace.

Her daughter, Empress Elizabeth, was not one to be upstaged by her mother, and upon clawing her way to the throne elected to have the palace entirely rebuilt, a process that required four years, 100 kilograms of gold, and nearly 3,450 metric tons of hideous. So Catherine the Great, when you get right down to it, was merely following in her mother’s and grandmother’s illustrious previous monarch’s footsteps.

We made our way out of the city toward this Altar of Awful, a trek that took us past a monument to the siege of St. Petersburg during WWII, Ford dealership, and a Wrigley’s chewing gum manufacturing plant. We arrived at last at the site of the palace, which is currently located behind a modern containment wall intended to help prevent the tacky from leaking out into the groundwater or contaminating the nearby environment. 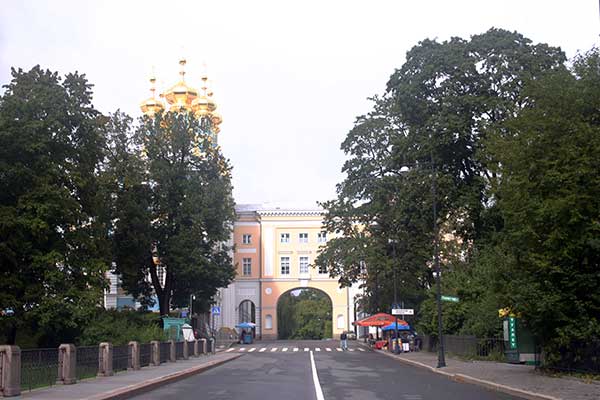 The containment wall isn’t perfect, and a hint of appalling gold-plated onion domes can be seen beyond it.

When we stepped out of our Ford SUV, we were immediately beset by a small gaggle of street performers who asked us where we were from. Upon hearing the answer was “the United States,” they started playing the Battle Hymn of the Republic, and then demanding a tip.

Had we perhaps more time, I could have made this into a learning opportunity for these pioneers of Russian free-market enterprise in the history of American geopolitics by pitching an artfully staged fit at their choice of music; “We are from the South! The South! Do you realize what an insult it is that you present us with this abominable music of the northern aggressors?” But I was in a hurry to have my eyes burned out of my head by pure concentrated awful, so I hurried along after our guide.

The palace is surrounded by a gold-plated iron gate (and God help me, I hope never to have to say those words again) that gives warning to the level of tacky awaiting the luckless bastard who ventures beyond: 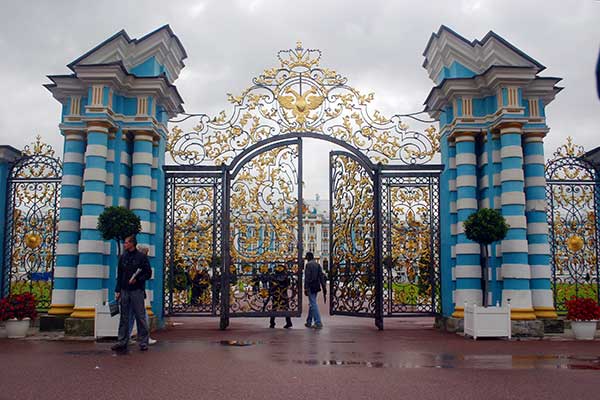 Which they would have done if it hadn’t been for that meddlesome Lenin and those meddlesome Bolsheviks.

Upon walking through the gate, the casual visitor is immediately struck by the scale of the bigness of the palace, which is quite large in the hugeness of its size. It’s also quite colorful, in the sense that a collision between a truck loaded with raspberry ice cream and a van hauling a shipment of paintballs is “colorful;” there is rather a lot of color everywhere, but one has to believe that there was never any sort of real plan behind it.

Yes, the roof really is plated in gold. I’ll be saying that a lot.

Viewed from afar, it’s difficult to get a sense of the scale of the place. Yes, it looks big, but everything about it–the windows, the doors, the columns–is oversized, so it’s actually far larger than the picture makes it seem. Here’s a closer shot, with some random folks in it for scale: 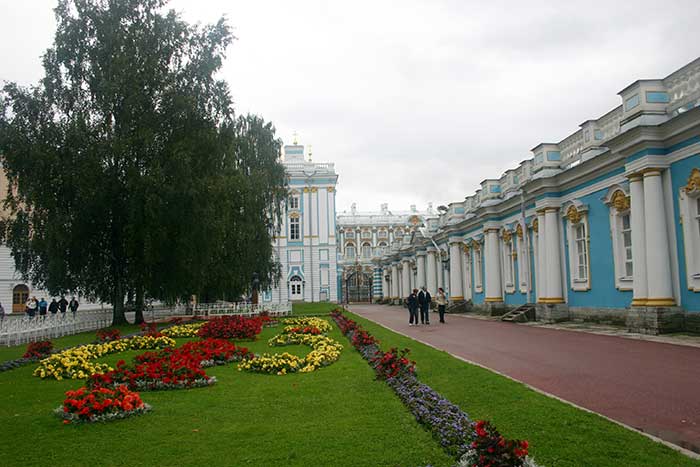 I suspect these folks are locals, just by the casualness with which they walk along; they have, through a process of acclimatization brought about by constant low-grade exposure to the tacky, developed a natural resistance.

All the windows along the front of the building had these unfortunate statues between them. 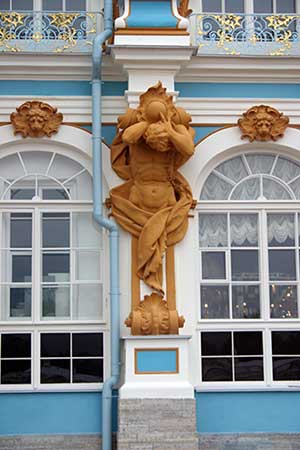 I imagine that if they could speak, they’d probably be saying something like “Watch, as we hide our faces in shame behind unfortunate hats, so embarrassed we are by our regrettable leglessness!”

After the zany, exuberant excess of the Winter Palace, I was a little surprised by the grand foyer of the Summer Palace, which seemed almost tame in comparison, with the perhaps arguable exception of the paintings on the ceiling. 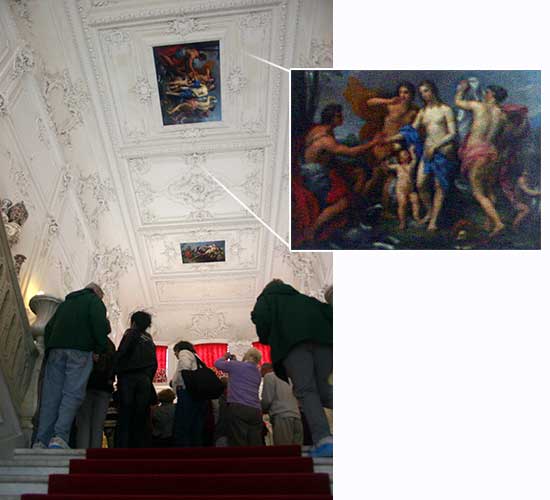 I’m not quite sure what the painting represents, but I think it is intended as a depiction of the popular festival in Russia known as The Celebration of the Naked Lady Shaking Hands With Some Dude Before Devouring A Small Child. You can get postcards in the gift shop.

The walls along the stairway were tasteless, sure, but not hte kind of high-octane, weapons-grade tasteless suggested by the outside of the building. 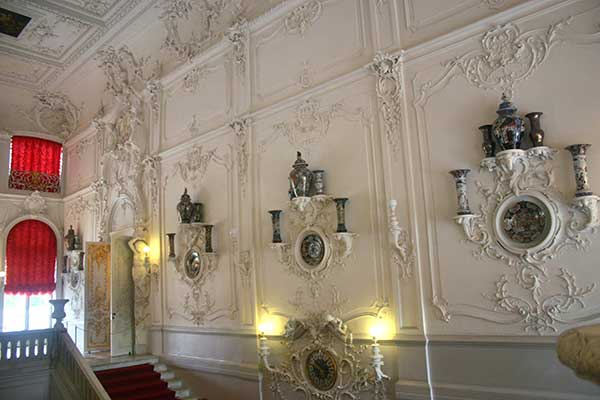 I mean, sure, the wall decorations are a little over the top, and I would perhaps have refrained from putting a clock in just exactly that spot, but it could have been worse. I actually kind of like the candleholders.

It does get worse, though. Much, much worse. 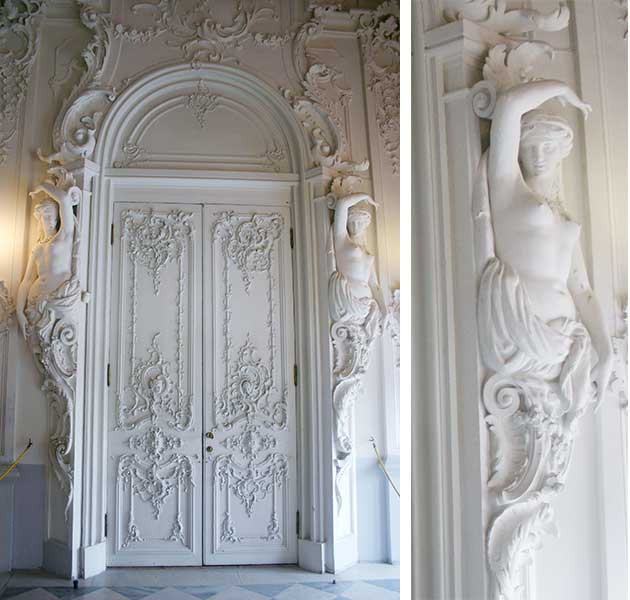 This…is the door into the ballroom. There is, if you can believe it, nothing special about this door. Indeed, compared to most of the doors in this place, it’s downright restrained. There’s no gold on it.

Nearly all the doors are flanked by sculptures of half-naked women, or perhaps more accurately, sculptures of naked half-women. I’m not quite sure what happened to their legs, except perhaps that their breasts were designed to be of such royal magnificence that nobody ever looked down any lower than that, so the artists didn’t bother to finish the bottom bits in a cost-saving move.

Why Elizabeth and both Catherines preferred to be surrounded by naked half-women is a bit of a mystery to your humble scribe, who can only speculate that perhaps Peter the Great’s problems may have been hereditary.

At least these ones don’t squirt at you.

The true horror of the place doesn’t start to become apparent until you venture into the grand ballroom. 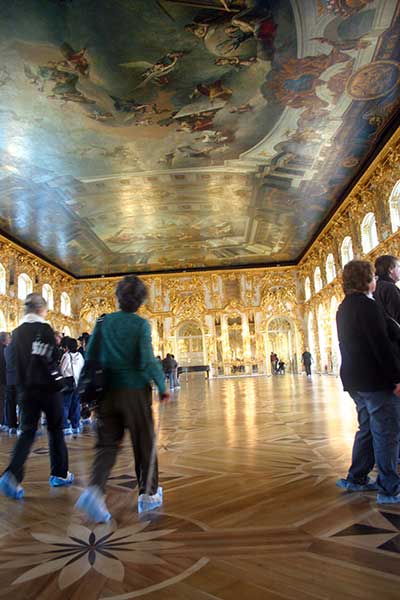 Before guests are permitted in, they are required to place little clean-room-style booties over their shoes. Otherwise, apparently, bits of the souls of the dryads get stuck to your shoes, and if you track them outside the containment structure…well, let’s just say it might cause an incident.

Yes, that’s gold up on the walls–a recurring theme past the foyer. I don’t know what that is painted up there on the ceiling. The guide said something about angels and chariots and the hosts of heaven anointing the Tsarina with the divine blessings of imperial monarchy, the better to sell herself to the peasants, or something like that. I’ve always been deeply skeptical by an omniscient, omnipotent divine creator of everything who seems to find it necessary to validate human sociopolitical structures, often to the benefit of the very people who tell you that the omniscient, omnipotent divine creator of everything is validating the current sociopolitical status quo, but I’m just a cynic that way.

The gold-all-over-the-walls motif continues as a theme throughout the palace, even in the state dining hall. Which, in case you were wondering, looks like this. 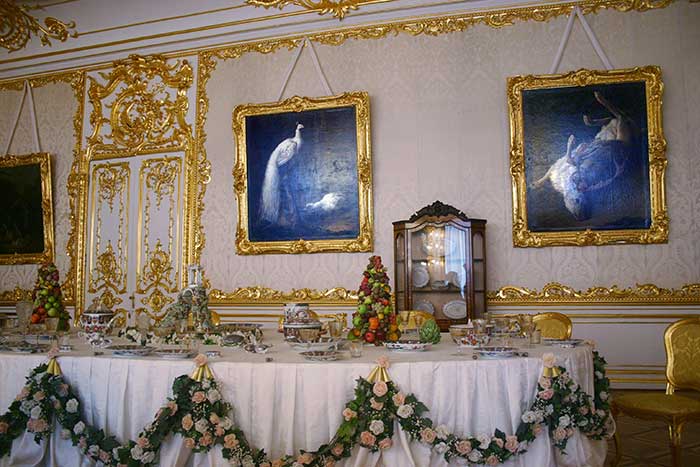 Now, I can’t speak for the fashion of the time, but…eating in the presence of royalty who found it necessary to decorate the dining hall with paintings of dead animals would quite likely put me right off my lunch. PETA could build an entire Web site around this place, to go along with their Web sites suggesting that all household pets should be replaced by robots and campaigning to rename fish “sea kittens”.

It’s hard to get a sense of the real horror of the paintings–again, flash photography was forbidden, so I had to make do with what I could get–but the one on the right is a dead deer, and the one to the left of that shows a dead duck with its neck broken flopped over on the ground next to something–an albino peacock? I’m not sure–that seems quite indifferent to its presence.

These paintings line every wall, so the only place one can look without losing the will to eat (or indeed, the will to live) is either up or down.

Of the two, I suggest down. If you look up, you see this. 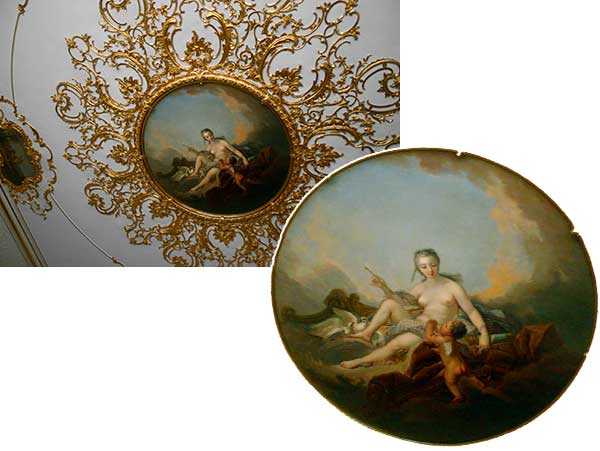 It seems Elizabeth and the Catherines really, really liked their ceiling art. Of half-naked whole women, wholly naked half-women, and/or any combination thereof. This particular piece is called “Cherub, go to your cloud.” Or that’s what I call it, anyway. It’s noteworthy as being one of the finest existing examples of a particular artistic style called Baroque Cthulhu; that frame, during certain times of the year near the winter solstice, can crawl along that ceiling into a dark corner and do awful things. Unspeakable things. Things to drive a strong man mad, and a strong woman long for dark sapphic pleasures.

Elsewhere in the palace, the ceiling art generally returned to the winged-beings-and-chariots leitmotif so often favored amongst royalty and despotic monarchs of all stripes. 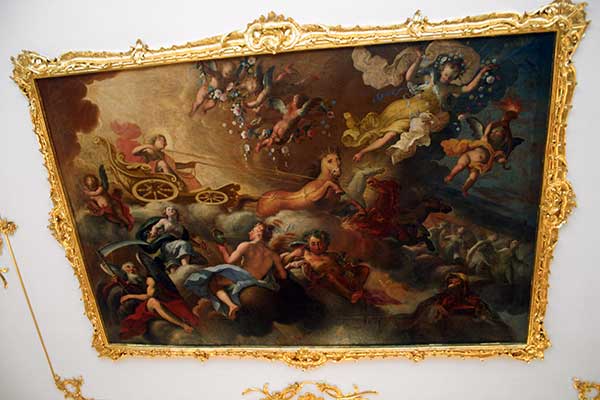 I think this one is called “God Says I Can Do Whatever I Want and M. C. Escher Agrees, So There.” Apparently, violating certain normal conventions regarding perspective is covered by the “whatever I want” part. 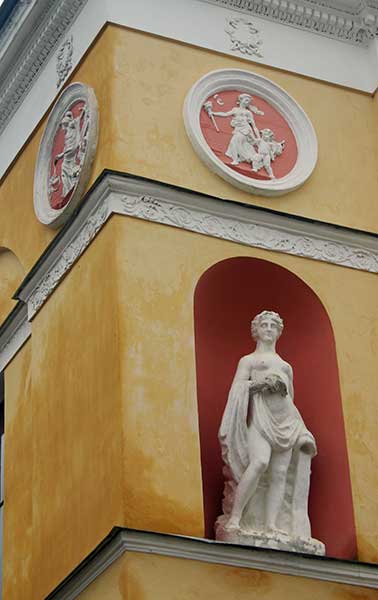 A random niche in the side of a wall on a cupola or bell tower or something in back of the palace. Why, yes, they really are that magnificent, and thank you very much. Plus, as you can see, I have legs. Which puts me a leg up on those tarts inside by the doors. Get it? A leg up? Ah, I slay me.

18 thoughts on “Adventures in Europe, Chapter 13: Good taste? I’ve heard of that”