When Peter the Great first founded St. Petersburg, which it must be stated again he most definitely did not name after himself, so perish the very thought, it was a swamp.

Well, not quite, but pretty close. I think the first one actually stayed up all on its own.

The fortress was built on an island close in to modern-day St. Petersburg. You can see it from one of the squares downtown: 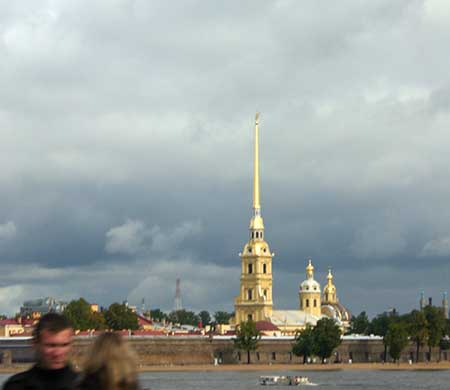 The spire you see here is the roof of the Peter and Paul Cathedral (again, not named after Peter the Great, just to be perfectly clear on that point–it is the merest coincidence that he consistently chose saints who happened by the slightest chance to share a name in common with him when he went around naming things), and yes, that’s real gold. By this point in the trip, I was thinking “My god! Do you know how many iPhones can be made with that much gold?” But then, I’m a pragmatist like that.

The particular square from which this photo was taken is a popular spot for weddings in St. Petersburg. There were no fewer than three wedding parties there at the same time we were: 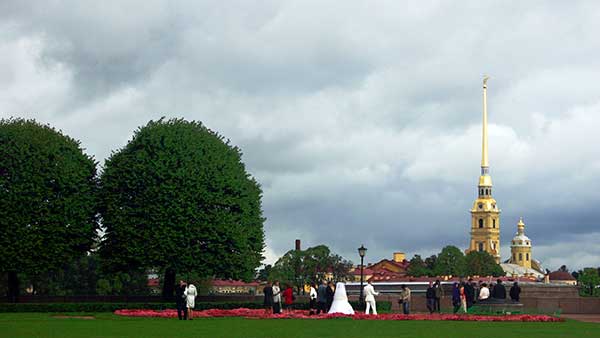 Pros of having a wedding on this spot: It’s picturesque, it’s scenic, the gold spire in the background is so tacky that almost any bridesmaid’s dress looks good in comparison, and there’s at least a 20% chance you won’t be rained on, hailed on, sleeted on, snowed on, or otherwise precipitated upon. Cons: It’s in Russia. You don’t want to be outdoors when the ice weasels come.

This particular square is guarded by brightly colored and elaborately decorated lighthouses, to warn passing ships of the treacherous shoals, swarming with ice weasels, that awaited the incautious sailor. 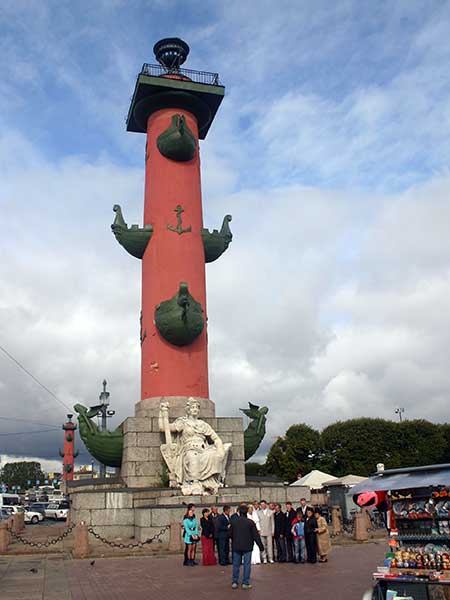 Now, I am not an expert on the design or construction of lighthouses generally. Nor will I claim to any depth of knowledge on the subject of maritime navigation; hell, I can barely drive to the corner convenience store without satellite GPS. So I may be displaying some level of my own naivety when I wonder about the choice of adornment for these lighthouses.

I don’t quite understand what led the architect to decorate these with images of ships projecting entirely through the lighthouse, as I thought that was precisely the eventuality that a lighthouse was intended to prevent. 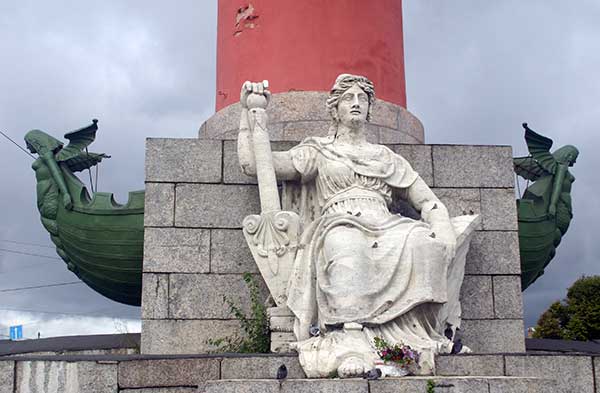 …but the local fauna appeared to believe that she was the Patron Saint of Small Songbirds. Seriously, they were everywhere on her, adorning her liberally with their offerings. And by “their offerings,” I mean “bird shit.”

The boat which has rammed the lighthouse behind her appears not to know whether it’s coming or going.

After we’d properly soaked in the general overview of tacky from afar, we headed to the fortress so that we could get a chance to really appreciate the tacky up close. Peter and Paul Cathedral, the main structure in the center of the fortified island, was at one time a Russian Orthodox church and is currently a tomb for former members of the Russian aristocracy. Peter the Great, Catherine the Great, Catherine the Not So Great As Catherine The Great, Alexander II the Not Very Bright, and Nicholas II the Illiterate (so named because of a stunning inability to read the writing on the wall, so to speak) are all interred here.

The cathedral is about what you’d expect from an ancient Orthodox Russian cathedral: zany in its excess, though with fewer icons of saints than I wold have expected. 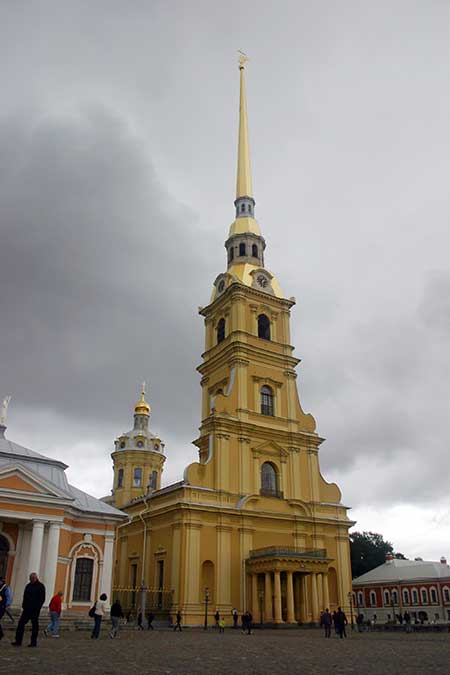 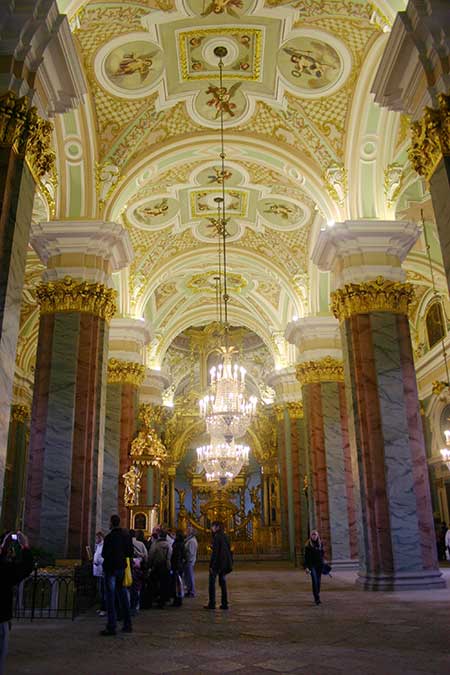 The lack of religious icons of saints is more than compensated for by the plethora of gigantic marble tombs, each of which weighs many tons and contains the mortal remains of someone who believed he could do whatever the hell he wanted to do. 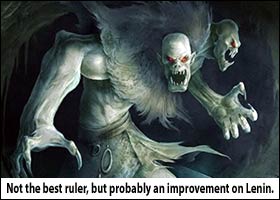 Russian society has a weird relationship with the Tsars. On the one hand, they venerate their old rulers, and entomb them in enormous cathedrals of gold. On the other hand, they keep them safely trapped beneath massive stone slabs, and surround them all with cold-iron fences–proof against the possibility of some sort of unholy return to life. Apparently, the only thing worse than being ruled by a tsar with an unquenchable thirst for power is being ruled by an undead tsar with an unquenchable thirst for blood.

The Romanians experimented briefly with undead autocratic rulers who had an unquenchable thirst for blood, back when part of Romania was still known by its old name of Transylvania, and the general consensus seemed to be that it didn’t work out so well. During the Convention of 1917, when Russia was still trying to work out how it would be governed in the future, the undead contingent lost out to the Bolsheviks largely because of the Romanian vote. Had they had it all to do over again, the Romanians might concede that perhaps their estimation of what was best for Mother Russia might have been in error, since shambling, blighted, inhuman monsters from the pit of Hell could hardly have done worse than Lenin’s peeps, yo. 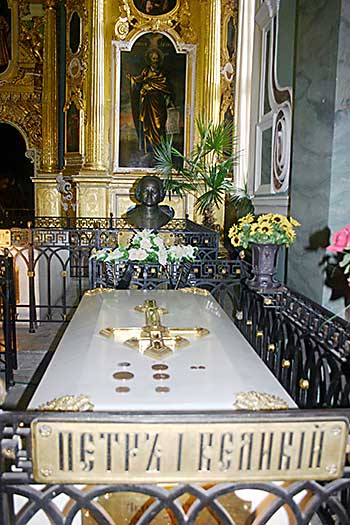 There’s a bust of him at the end of it, minus his appallingly silly hat, though I can’t help but think he’s probably somewhat the worse looking these days than the bust might indicate. There is a significance to, and a story behind, each one of the coins you see on his casket here. Our petite guide of the nameless name explained it to us, though I was too busy diverting my attention to the cathedral’s defenses against the shambling undead to catch it all.

Peter and Paul Cathedral, named before Mary joined the group, was our last stop in the fair city of St. Petersburg. After that it was back to the floating hotel to bid farewell to Russia. As we left the fort, we said goodbye to this adorable little calico cat, washing herself on the steps to the cathedral in apparent disregard of the slavering undead imprisoned by iron and stone within. 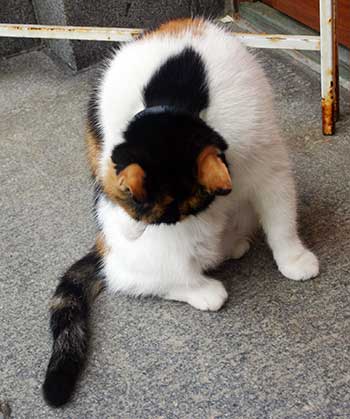 We steamed away from port and headed past Kronstadt, an old sea fortress built by Peter the Great from preventing the Swedes from doing to him what he had done to them and kicking his ass with a huge navy, caliber of hats notwithstanding. It’s an island, frozen for part of the year, around which he built an impressive set of naval fortifications guaranteed to spell certain doom to anyone foolish enough to try to force a passage through it.

Today, it’s still used as a Russian naval base. There was a pair of nuclear attack subs in the port when we steamed by. Unfortunately, it had started raining heavily during our passage, and so I did not get any pictures of the subs that didn’t suck.

The old Imperial-era fortifications themselves are pretty cool, in a James Bond villain kind of way. 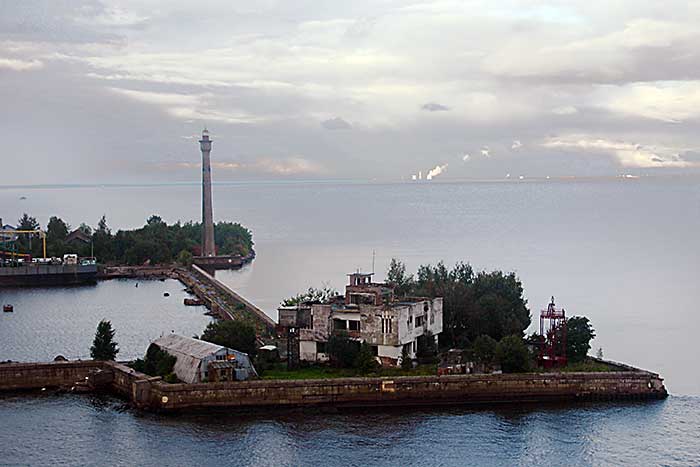 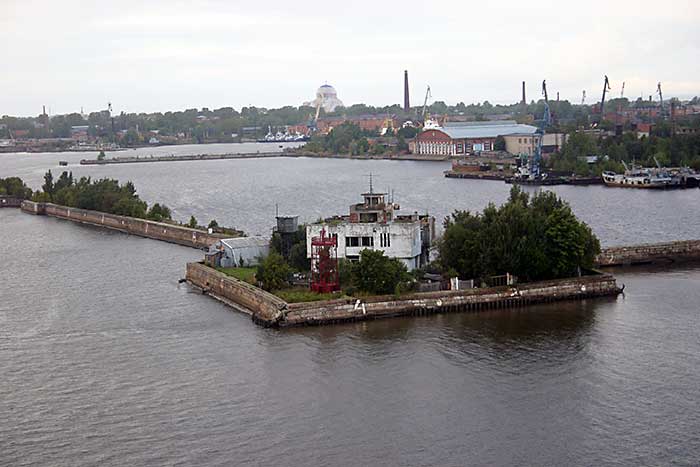 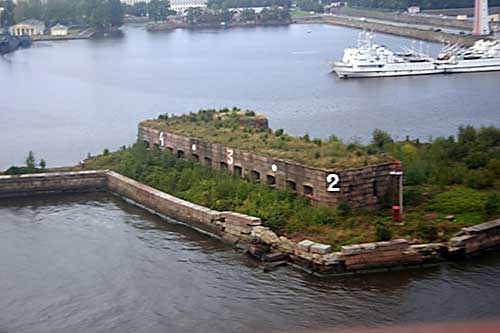 I’m not sure what the numbers mean.

Peter the Great reasoned, correctly to all appearances, that even a huge naval armada would find a series of narrow, walled channels with fortresses and gun emplacements all along them to be a tough nut to crack. Especially when you think of how many cannon it’s possible to stuff into a structure like this: 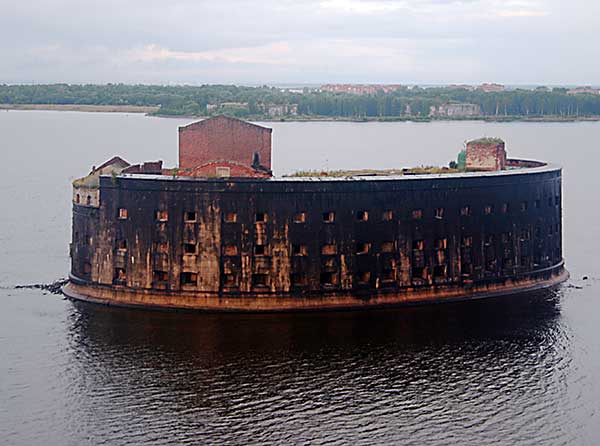 I totally want to live here. With a fluffy cat that I can stroke while hatching plans of unspeakable villainy. Or at least do a photo shoot here.

20 thoughts on “Adventures in Europe, Chapter 14: I see dead people”