Whenever I’m in a new city for the first time, one of the things I really like to do is walk the streets. I find that I can get a much better feel for a city when I can…err, you know, feel it.

So when our tour guide of the name that can’t be heard offered us a choice of yet another cultural center or an opportunity to walk around downtown St. Petersburg for a while, I voted for the latter. Since I seemed to be the only one with a strong opinion on the matter, I think I won by default.

St. Petersburg is a strange city. It’s kind of like what might happen if you took Detroit and gave it a real history. It’s a strange mix of palaces, soaring cathedrals, urban shopping malls, and squalor. The result is a weird and jumbled juxtaposition of things, almost as if some space alien had taken a number of architectural works from all over the world and set them down in the middle of Newark in an attempt to create a terrarium for its pet humans. 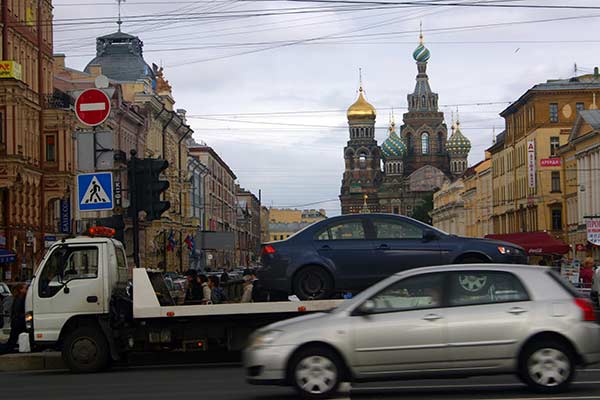 “See? It’s just like their native habitat! They have little roads to drive on, and little signs to read, and even a little church where they can pray to their gods or saints or whatever they call them!” 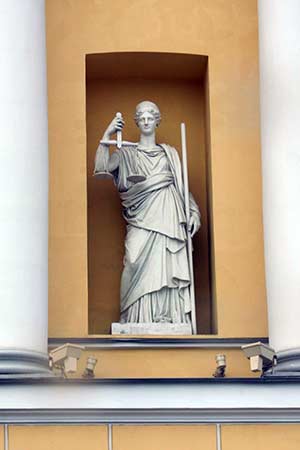 In Soviet Russia, justice is not blind. Justice sees you quite well, Comrade. Justice knows exactly what you did last summer, and has even seen the videotape on YouTube. Justice does NOT approve. Justice thinks you should be ashamed of yourself. The gulag for you, Comrade! As for your family, Justice knows what to do with them, too.

Have a nice day, Comrade. 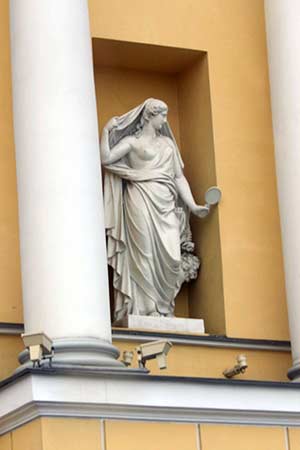 Why yes, they are that magnificent, and thank you very much. (At least these ones look reasonably natural, as if carved by a sculptor who has actually known the touch of a woman.) 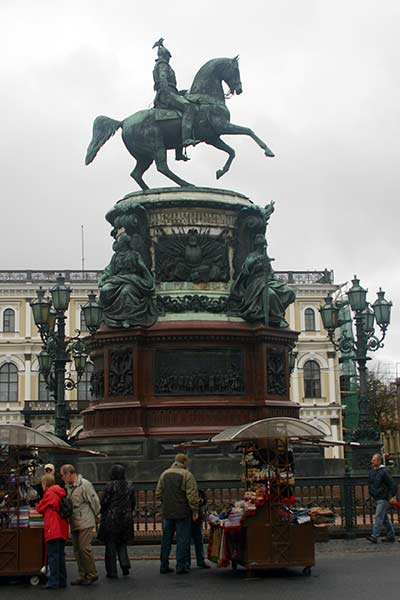 This statue, according to our diminutive guide of the statistically improbable name, is the world’s largest bronze casting that’s only supported at two points.

Every town in the world can claim to have something that’s unique. Darwin, Minnesota has the world’s largest ball of string. St. Petersburg has the world’s largest bronze statue that’s only supported at two points. Juarez, Mexico is the murder capital of the world. Tampa, Florida is the lightning capital of the world. Newark, New Jersey is home to a record-breaking number of smells, whereas Seattle, Washington holds the title for the most shades of gray in any one sky. Coeur d’Alene, Idaho has more violent white supremacists per capita than any other city. And Portland, Oregon is home to more cute bisexual Subway sandwich makers with tattoos and facial piercings than any other city.

Some of these claims are, I think, more significant than others. For example, I prefer Portland, Oregon to Juarez, Mexico, on the grounds that (a) I have a fondness for cute bisexual women with tattoos and facial piercings and (b) I can’t indulge my fondness if I’m dead.

It is a cool statue, though. I’m not sure what the thing on top of his hat is.

St. Petersburg is also home to an enormous statue of Vladimir Lenin, erected before everyone discovered what a douchenozzle he was and then never taken down. 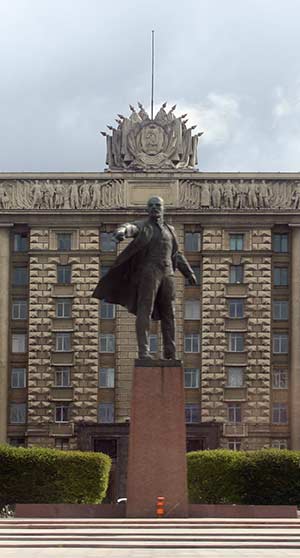 According to our tour guide, this particular pose was quite popular in images of the Great Douchenozzle. He’s supposed to be delivering a stirring lecture to the working class or inspiring the underprivileged or ordering someone to be executed or seizing control of an independent newspaper or something. Apparently, most folks think it looks like he’s hailing a cab.

Lenin wants you to be inspired. Not being inspired is treason. Treason is punishable by death. Are you inspired, Comrade?

The fall of the Soviet Union opened the doorway to Western-style street advertising in the Eastern bloc. It’s really only a matter of time until ClearChannel moves in, and then it’s curtains for the free world. 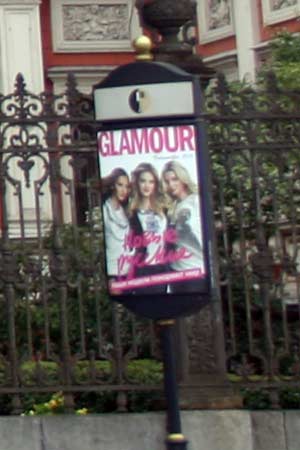 If Lenin were alive today, he’d be spinning in his grave. 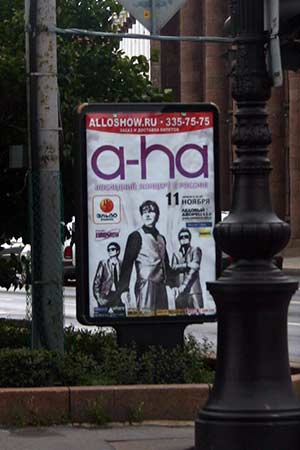 Spinal Tap may be big in Japan, but A-Ha is huge in Eastern Europe. Huge, I say! And now I have that one song stuck in my head. You will too. Such is the malignancy of my evil. 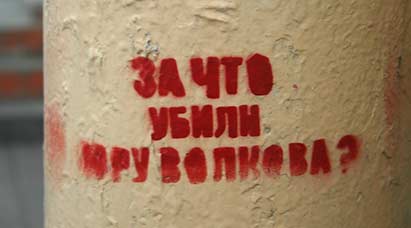 I saw this spray-painted in a bunch of places all around St. Petersburg. It’s interesting to see graffiti in a language I don’t recognize. I kept wondering what it was asking.

For all I know, it says “Do you want new car? Check out Vladimir’s House of Cars!” I know there are at least three folks on my flist who can read it…

St. Petersburg was intermittently wet and rainy while we were there. I actually quite like the way a city looks after a rain. I think it’s a consequence of being a child of the 80s and watching all those episodes of Miami Vice where they would wet down the roads before they started filming, just because they liked the texture. 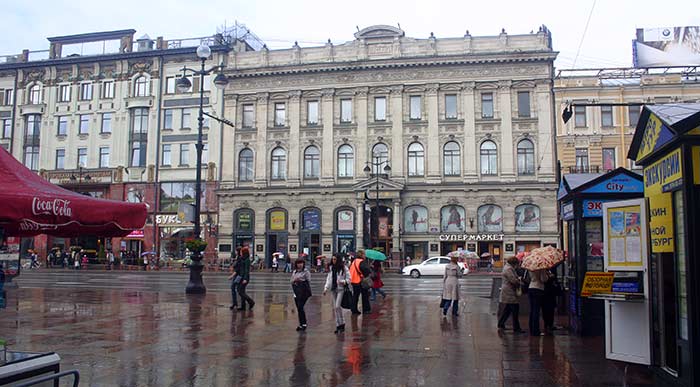 I particularly like the Coca-Cola logo in the foreground. Lenin wept. 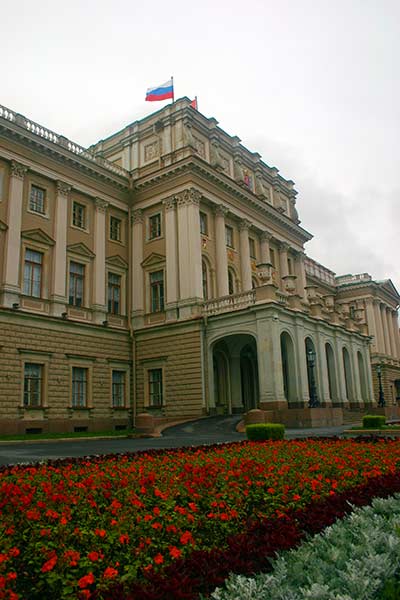 Government offices all over the world seem to share a similar architectural language. This building wouldn’t really look that out of place in Tallahassee or Seattle. (Well, the landscaping is a bit nice for Tallahassee, but you know what I mean.)

One look at the people who were patrolling in front of it, though, and you know you’re not in the United States. 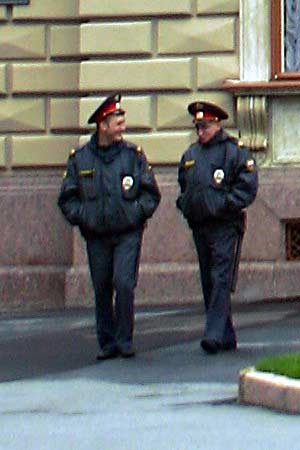 Check out those hats. These guys mean business, and no mistake. Don’t let the jovial expressions fool you–those hats are all business.