I’ve never been to Eastern Europe before. I’ve also never run naked through a plate-glass window before either, or been dragged behind a motorcycle through thumbtacks and rubbing alcohol either. Had you asked me, say, five or ten years ago, I’d have said that any of those options looked about equally appealing–and, to be honest, equally likely.

So it was with a considerable sense of irony that I approached Russian passport control in St. Petersburg, our next port of call after the Note From zaiah That Broke My Sister’s Brain incident, with my American passport in hand. He who laughs last, laughs all the way to the politburo, or something like that.

My first impression of St. Petersburg outside passport control was about what I expected the former Eastern bloc to look like: nondescript concrete apartment buildings, still under construction, shrouded in gray fog. 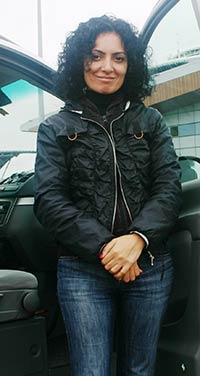 I was surprised to find the rest of St. Petersburg was quite colorful and lively. We had a tour guide whose name I didn’t catch either time she said it, who was actually quite a cutie, and tended to wear very American clothes. Including, at one point, a jacket with “Washington State” printed on it.

St. Petersburg is not technically named after Peter the Great, even though he founded the city. Apparently, or so the story goes, that level of arrogance would not have been accepted by the Russian people, a proud (but not that proud) folk who valued the principles of humility, modesty, and monomaniacal lust for power in a leader. It would not be until the Bolshevik Revolution that the Russian character would be tempered sufficiently for a city named directly after a political figure, which is why St. Petersburg would later be renamed Leningrad, before everyone realized what an astonishingly colossal douchenozzle Lenin actually was and changed its name back again.

All of this was explained to us, minus the word “douchenozzle,” by our tour guide of the unpronounceable Russian name. We zipped out into the city in the back of a Ford SUV, which fact by itself says almost all you really need to know about the fucked-up geopolitics of the dying days of the twentieth century. Once the many names of St. Petersburg had been illuminated with a harsh white light, we set out on our way to find out how Peter the Great (whose name only coincidentally happened to share a passing similarity with that of the saint of the saint he chose to name the city after, just so that’s perfectly well understood) actually lived.

The answer, as it turned out, was “rather like a fraternity brother with unlimited wealth and unlimited power, and more than a few…confusions about his sexual identity.”

Our driver, Igor, drove us through the streets of St. Petersburg past Stalin-era office buildings toward the old Winter Palace of Peter the Great.

Or perhaps I should say, toward a Winter Palace of Peter the Great. He had several, you see. When he got bored with one, he built another, and it should probably be mentioned here that Peter the Great appeared to have a case of attention deficit disorder that gave him the attention span of a lightning bolt, at least with respect to residences. It’s remarkably easy, as it turns out, to build a whole bunch of palaces when you have 200,000 slaves to do your construction work for you.

Anyway, the particular Winter Palace we visited was situated on the Gulf of Finland, which is basically a cold body of water that points more or less toward Sweden. According to our guide, building a palace on the water’s edge was Peter’s way of thumbing his nose at the Swedes, with whom he’d fought a war or something.

And what a palace it was. The Swedes may keep a stockpile of ostentation in reserve at the carefully-guarded Royal Palace in Stockholm, but Peter put his ostentation everywhere.

When we got out of the SUV and rounded the corner, through the gates and down a hill, I wasn’t quite prepared for the sort of ostentation that leaped out from behind a nondescript bit of wall and ambushed me like a strung-out mugger trying to carve a name for himself on the cold Russian streets armed only with an attitude, a bag of lead shot, and a strategic stockpile of ostentation that’d give Liberace a stroke. 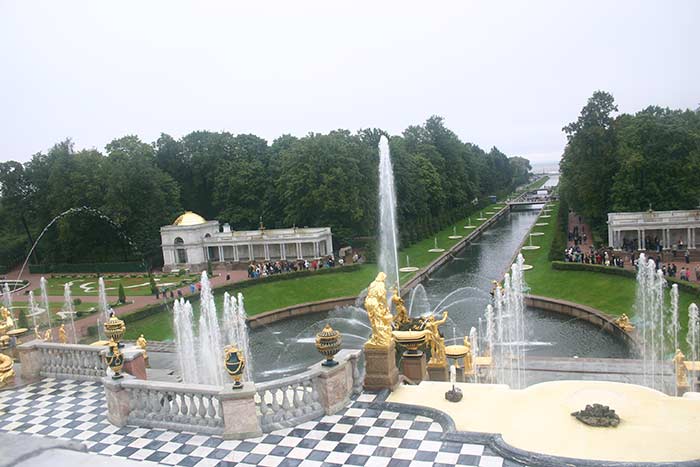 This is what you see when you walk around the main building and then stop. Which you will, when your brain figures out what your eyes are telling it.

Yes, it’s real gold. The statues, nearly all of which spurt a constant spray of water forty feet in the air, are covered with it. 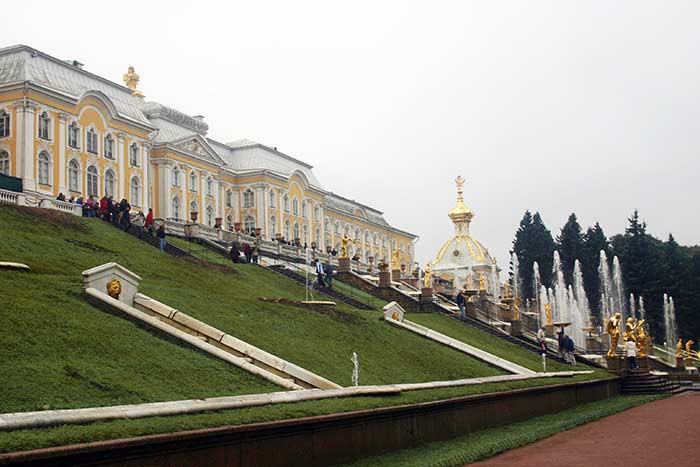 The roof of the building is covered with it. The architectural detailing is trimmed in it. Hell, the wildlife wandering the palace grounds is plated in gold. The squirrels shit little droppings gilded in gold.

There are worse jobs than being a groundskeeper here.

And this isn’t really even the full effect. As you move around, the ostentation runs up to you on quick little cat’s feet and punches you in the eyes. 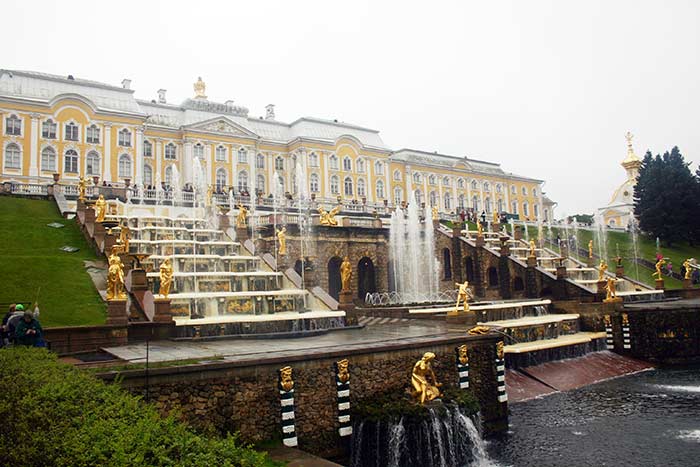 Our buddy Peter had an obsession with huge, larger-than-life statues of mostly naked men with bulging muscles and rippling sinew, performing manly feats of manliness. He also had an equally consuming obsession with fountains that spurt–nay, gush–huge pulsing jets of water high into the air. 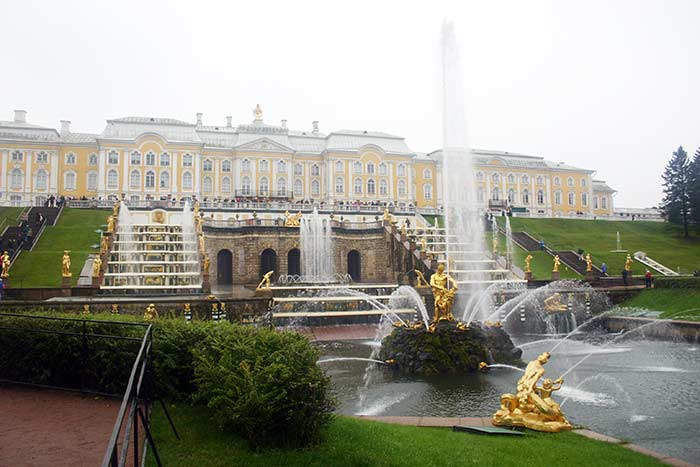 And what statues they are, too. Husky, well-built men, reaching down with powerful hands to pull hard at the jaws of fearsome monsters, from whence issue great spurts of frothy white water, in wet spurts of testament to their manly manliness: 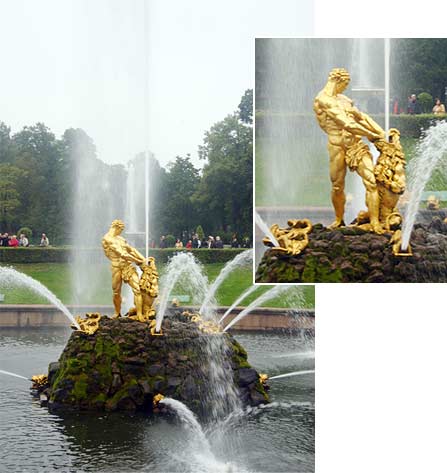 It goes without saying, I think, that Peter the Great had problems. Though in his defense, you might too, if you were named after male genitalia.

The fountain above, our lovely guide explained, was a symbolic reference to Peter’s wartime victories over the Swedes. The strapping and virile man of the muscles and sinew represents the Russian nation; the lion represents the Swedish nation; and the huge jet of water coming out of the lion’s mouth represents Peter the Great’s penis. Or something.

This same general motif carries through most of the fountains, like this one here: 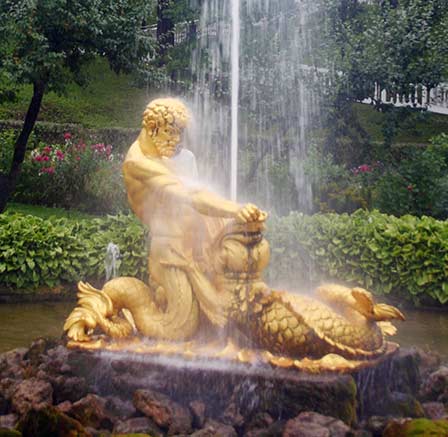 This particular statue, in which a perhaps bit over-muscled sea god tears open the jaws of a sea monster, is symbolic of Russia’s naval victories over Sweden. The surrealistically buff sea god represents Russia, you see; the sea monster stands for Sweden; and the jet of water represents…well, you get the idea.

As for this one: 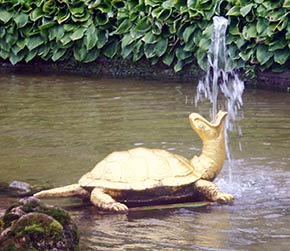 …well, I’m not quite sure what the turtle represents. But the way its suspiciously elongnated neck spouts a frothy jet of water, I think it’s safe to say that it probably stands for…

Yeah, did I mention Peter the Great had problems?

Now, to be fair, not every single statue on the grounds was of a strapping man who spent way too much time at the gym or engaged in combat that caused water to spurt from somewhere down around waist level. There were, in fact, a handful of statues of the fairer sex, in similar states of undress.

Though I couldn’t help but notice something very odd about them. 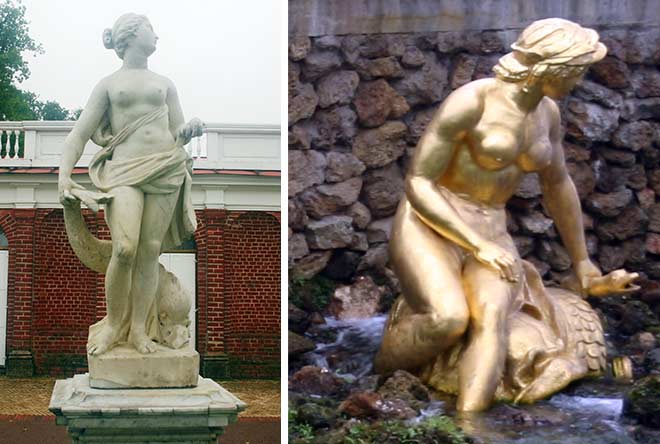 All the statues of women, and I do mean all of them, have the same breasts. And they don’t look quite natural, if you get my drift.

Now, I am aware that breasts come in all shapes and sizes, and I have seen some remarkable breasts in my life. Breasts to cause temperatures to rise and trousers to fall. Breasts to make the Pope kick a hole in a cinder-block wall. And I say this as objectively as any person really can, as I’m not even that much of a breast man.

The artists seem to quite like this particular mammarian architecture. Not only are all of the statues of naked women in Eastern Europe cut from the same cloth, chesticularly speaking, but they often seem to wear similar expressions, as if to say “Why yes, they are that magnificent, and thank you very much.”

Which is all more than a little weird, and maybe just the slightest bit creepy. Just a smidge, you understand.

Even the bizarre mutated deep-sea lifeforms that swam the depths of Peter’s fevered imagination would seem to agree. Take a look at this fishy fellow, who might have just swum from some Cthluhu-inspired undersea lair to swallow the souls of the mortal, had he not been struck down by the chesticular magnificence of our young lady of stone here: 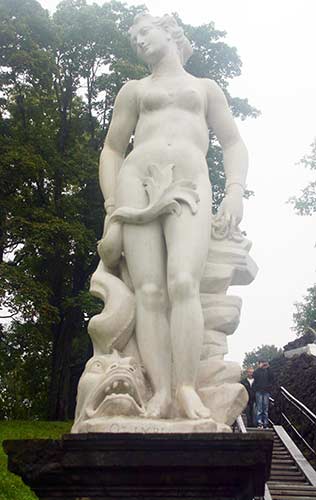 “Indeed they are, ma’am. Now watch, as I cover your delicate flower of womanhood with my wet and slimy tail, the better to…”

Okay, I admit it, I got nothing.

Ahem. Anyway, back to fountains. It seems Peter the Great’s obsession extended beyond plumes of water pumping high into the air. He was also quite fond, evidently, of seeing jets of water gushing all over his guests. And, in classic frat-boy-with-unlimited-wealth-and-power style, he planted booby traps throughout his fountain gardens just so he could spray all over unsuspecting people.

The fountain on the left is pretty straightforward. Normally, the water is off; there’s no sign this is actually a fountain. However, when an unsuspecting mark–say, one of his mistresses, or the visiting King of Prussia–sits on the fountain, water starts spraying from all around the edge of the umbrella…and it doesn’t stop when the unfortunate mark stand back up.

The one on the right is tricksier. It’s a metal sculpture that looks like a stylized tree that shoots water. Pretty, huh? Now, see that little cobblestone pathway on the left-hand side? Some of those cobblestones are rigged. When a mark steps on a rigged cobblestone, water jets hidden beneath the edge of the little white benches there start spraying all and sundry in the area with powerful blasts of cold water. (Some tourists set it off while they were waking along the path. Great fun.)

It bears repeating, I think, that Peter the Great had problems. 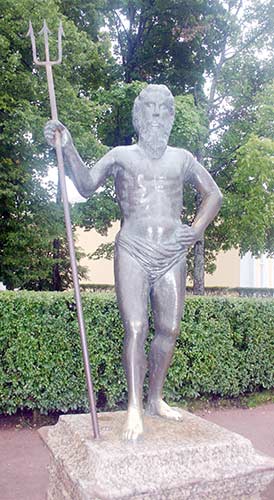 The statue, according to our tour guide, represents Russia’s naval might. The long, stiff, hard trident he holds firmly in his hand represents…

I can’t. It’s too easy. At this point, I’m shooting fish in a…never mind. Let’s just call the whole thing off.

28 thoughts on “Adventures in Europe, Chapter 6: In Soviet Russia, vacation has YOU!”