My sweetie zaiah has her master’s degree in engineering with an emphasis in water resource engineering, so last weekend she scored us seats on an eight and a half hour tour of Portland’s water collection and distribution network.

Which was pretty cool, actually, even if it did mean getting up at 7 AM.

Of the thirty or so people on the tour, I was the only one without a degree in engineering and/or working in the field of water resource management. 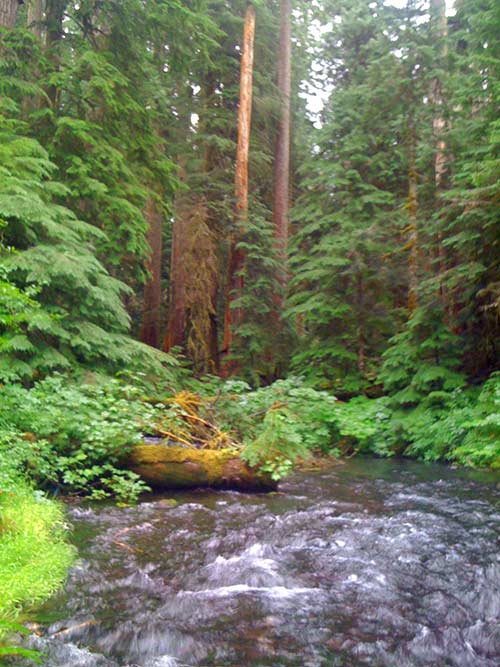 It starts in places like this–streams fed by rain and springs. You can almost drink the water straight out of the stream here (at least if it weren’t for the possibility of microorganisms)–the water’s so clean that Portland doesn’t do any filtration at all. They chlorinate it to kill bugs, and they let it sit for a while in huge underground bunkers to give sediment a chance to settle out, but other than that it’s straight from here to the pipeline.

Well, with the exception of a couple of dams along the way.

The water flows from these streams to larger streams, then into the Bull Run River, and then into a reservoir behind this dam. 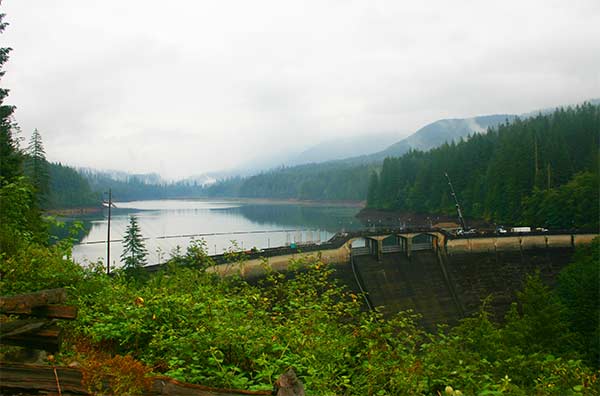 This dam, photographed from the vantage point of a house that in the 1920s used to belong to the person responsible for overseeing it, contains about seventeen billion gallons of water.

Most of Portland’s water distribution dates back to Victorian times. This particular dam was built in the 1920s; a much smaller dam, which diverted water into a simple gravity-fed pipeway, was built nearby in the mid-1800s.

And speaking of gravity-fed pipeways: 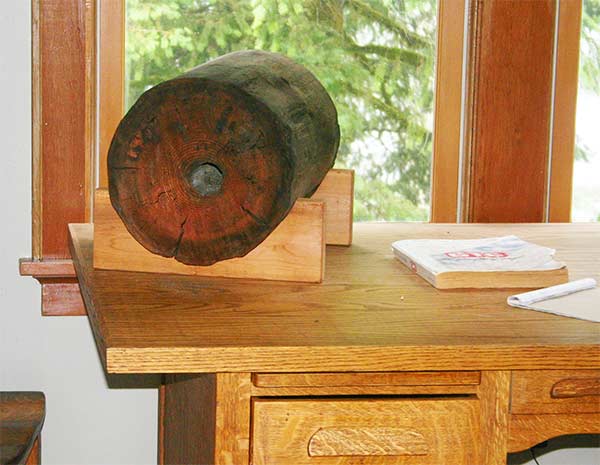 The study in the house overlooking the dam. You want to know what that round chunk of log is doing on the desk? Do you?

Remember how I just said a second ago that the first dam diverted water into a simple gravity-fed pipeway? You see that piece of log? That’s the pipe.

Yep, you read that right. Those whacky Victorians used wooden water distribution pipes. They chopped down a tree, drilled a hole through the middle, and called it a pipe. Sections of tree were linked together with brass fittings to form the entire plumbing system. How’s that for steampunk?

This wooden pipe system was actually in use in Portland through the 1960s. Those whacky, whacky Victorians–the water for this would have come from a wooden pipe.

So, on to the dam. We climbed to the foot of the dam by means of a narrow, wet concrete stairway guarded by a flimsy-feeling and very rickety guardrail: 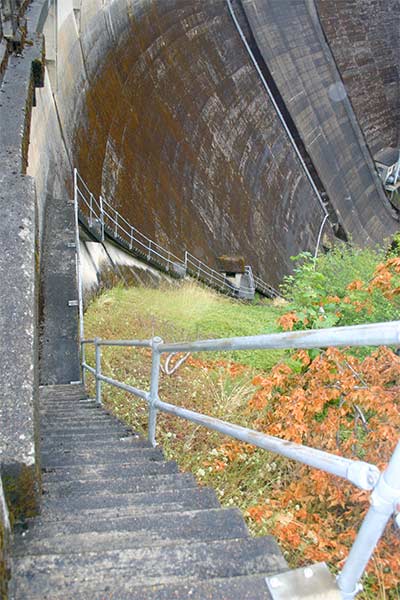 The architect of this stairway plays a cunning trick on you. The point at which the stairway itself vanishes from sight is only about halfway down. It’s not until you’re halfway down that you realize how many stairs there are.

Did I mention that the stairs are narrow? And wet? They’re uneven, too. 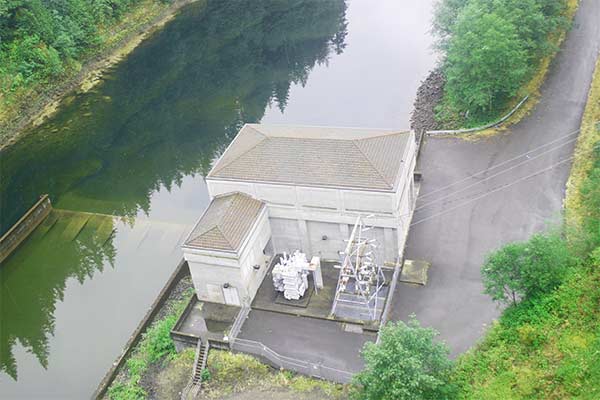 This is the powerhouse, which generates hydroelectric power from the dam, photographed from approximately midway down the Staircase from Hell.

This modest little building produces 24 megawatts of power when it’s running. Drinking water takes precedence over power generation, so if there’s a shortage of water, they quit generating here. 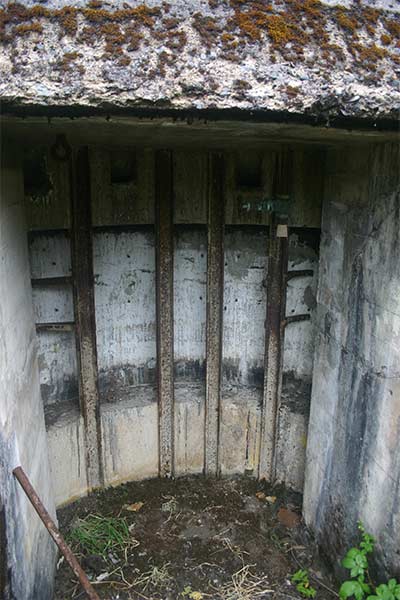 I have no freakin’ CLUE what this is. This niche is carved into the side of the dam near, but not at, the base. Equipment mount? Machine gun turret emplacement? Beats me. 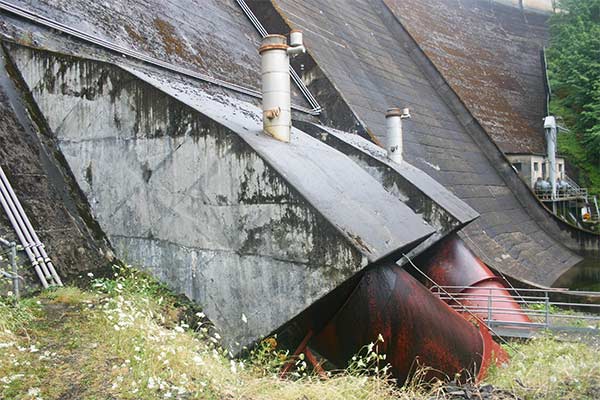 These are the feeder pipes that supply water to the power generating turbines. It’s hard to get a sense of scale from this picture, except perhaps from the walkway between them. These things are huge. I’m 5’10” or thereabouts and can almost walk through one of these pipes without bending over.

When this dam was built, there wasn’t a power generating station, but the engineers wanted to be able to retrofit one later. So they placed these through the dam when they poured the concrete, even though they had no immediate need to use them.

Builders and architects don’t do things like that any more. Why spend $100,000 today, when you can spend $5,000,000 (and shut down the dam completely) in a few years when you decide you need the pipes?

If you look across the dam from this vantage point, you’ll see a small block outbuilding with two gigantic needle valves mounted to it. More on those in a minute.

From this point, we entered the base of the dam and walked through it to cross the river.

These are the pictures of the inside of the dam.

You will notice there aren’t any.

DHS rules allow people to take pictures of the dam, around the dam, over the dam, but not in the dam…because they’re scared, you see, that it might be a “security risk.”

Americans have a weird, generalized dread of Terrerrerrism that makes us easy to manipulate, and also lets us put up with a lot of really stupid bullshit.

And a lot of it is because we can not, as a nation, tell the difference between a real threat and the plot of a James Bond movie.

Bruce Schneier, a security professional, talks about the difference between real security threats and movie plots over on his Web site. Essentially, people think “Oh, a terrerrerrist would need to take pictures of some place he wanted to blow up!” in spite of the fact that, actually, no they don’t.

And really, pictures of the inside of the dam wouldn’t help them anyway. It’s a long hallway, domed, with light fixtures along the walls at regular intervals. Kinda cool, in a very industrial sorta way, but no matter.

Anyway, while we were walking through the dam, our tour guide remarked in a sort of offhand way that if the structure should experience a sudden and total catastrophic failure, we’d be best off running up the stairs toward the top than lengthwise along the hall.

Which was, sorry to say, kind of dumb. The dam holds back 17 billion gallons of water, which is, at a rough back-of-the-envelope guess, somewhere around one hundred and forty billion pounds of water.

If the dam suddenly and catastrophically failed, none of us would even have known it. We’d be stone cold dead before our nervous systems even registered the fact.

So, moving onward, we came out the far side of the dam near those needle valves I mentioned before: 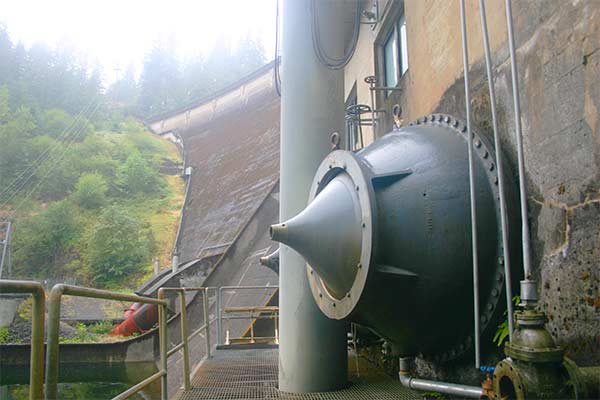 It is these, not the spillway over the top of the dam, that are the main mechanism of regulating the amount of water in the reservoir.

I didn’t realize that, but water only comes over the top of the dam if there’s a flood. When they regulate the water in the reservoir or send water downstream to supply the drinking water system, they open these valves. Apparently, it’s quite dramatic–when these valves are opened, a solid column of water gushes out about a hundred feet downstream.

It’s freaking cold, too. The average water temperature in the reservoir is typically between 2 degrees C and 7 degrees C at the base of the dam, year round. Apparently, every summer you can rely on some poor dumb son of a bitch complaining that it’s too damn hot out, hopping the fence around the reservoir, diving in, and dying. (Not so much here, but there are additional reservoirs downstream that are more accessible.)

Next to the needle valves are a pair of small portals that look like this: 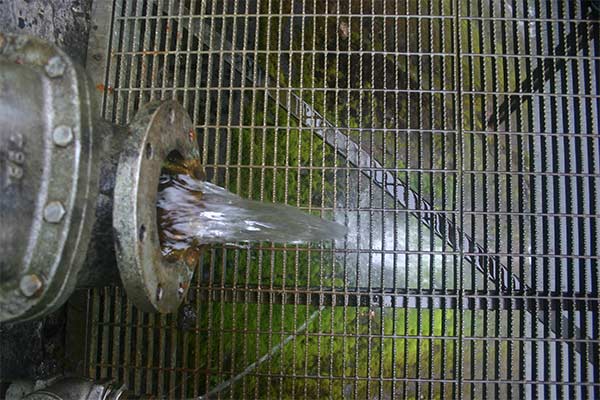 I was a bit baffled by these, but apparently this is all leakage from the dam. All dams leak to some extent; the water drizzling out here is monitored for volume and sediments, since a sudden change in either can signal a structural problem. 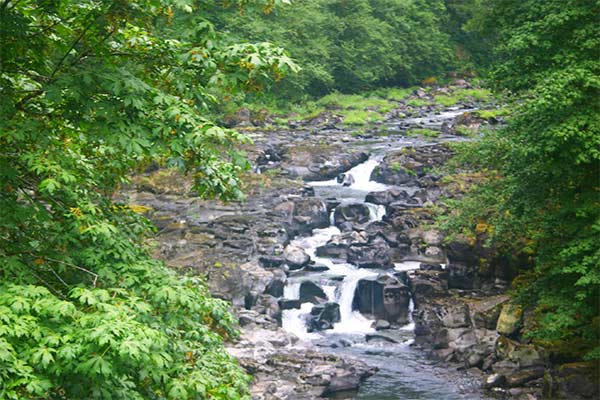 This is downstream of the dam.

One of the things I can not get used to in Oregon is all the natural beauty. In Florida, natural beauty is mined from deep underground, chopped up, wrapped, and packaged for retail sale in stores all across the state. In Oregon, there’s so much natural beauty they just leave it lying around all over the place.

Hell, I’m always afraid I’m going to track it all over the carpet on my shoes. It’s everywhere! That just can’t be right.