And now on to the post I had intended to make.

Last weekend, while walking to Sushi House during the five and a half hour sushi-related adventure detiled here, we passed a lighted advertisement for Remy Martin booze mounted on the side of a bus stop.

The ad suggests hot biracial girl-on-girl action, with just a hint of bondage play. I snapped a pic with my iPhone; sorry about the quality, the light was very low. 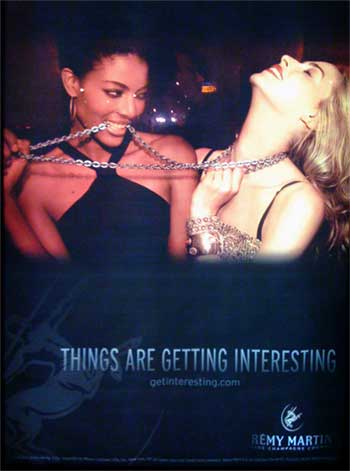 It’s part of the “things are getting interesting” ad campaign for Remy Martin, who I gather make booze. Not surprising, really; booze and body spray (and by the way, WTF is “body spray,” exactly? I’ve never quite figured it out. As near as I can tell, it’s a product category that didn’t even exist a decade ago) are generally advertised with overt, and sometimes over-the-top, sexual imagery. Here are a few more images from the same advertising campaign: 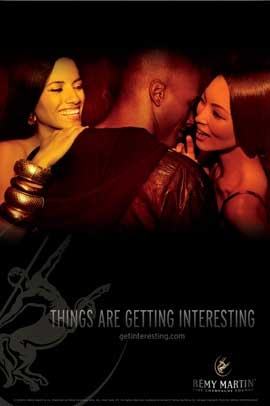 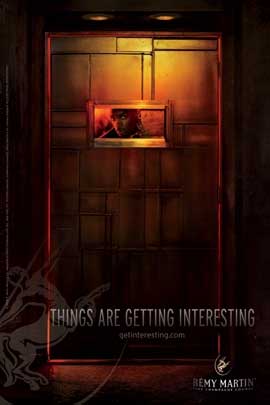 So basically, what we’ve got is kinky girl-on-girl action, hot threeways, and a rather nice dungeon door. I want that door on my private dungeon when I build my next house…but I digress.

This, of course, is how we know God is a guy. ‘Cause God thinks girl-on-girl action is hot, but guy-on-guy action is gross. There’s no question in my mind that if the first ad featured two half-naked, well-muscled men, the campaign would be canceled post-haste. C’mon, seriously, you know the religious brigade would be all up in arms, burning things with torches and reciting from Leviticus and whatever else it is they do.

‘Course, none of this is particularly new. I’m just curious if there’ll ever be a day when there’s a little more parity in the kinky sex. You know, as a bold announcement of a significant new step by society toward equal rights and representation for all1. (And why is it that girl-on-girl is hot but guy-on-guy is gross in the public’s mind, anyway?)

“Buy our product and two hot models will fuck you. Like, at the same time. And you can watch them fuck each other, too! Really, honest Injun. You can tell we’re sincere ’cause our ads are all, like, moody and stuff.”

1 Actually, while I say that tongue-in-cheek, there was a time–and not too long ago, at that–when even the merest suggestion that people of different races might want to get it on with each other would’ve brought out the torches-and-pitchforks crowd faster than you can say “anti-miscegenation laws are stupid and patently offensive.” So maybe there is hope.

Yes, I know California passed Proposition 8. I expected it to pass, actually. It’s the last dying gasp of the bigots and homophobes; in a few generations, this and other stupidity enshrined in state constitutions all over the union will go the way of those anti-miscegenation laws, which were also writ into state constitutions not so long ago.