The three of us made it home from our sushi run almost six hours after the moment when I first said “Hey, why don’t we go get sushi now?”

The last ten minutes was the most harrowing; we’d opted to cheat and call a cab from Sushi House, which took us to the train station one pint nine miles away, as the Google Maps crawler crawls. From there we went to the subway station ten minutes from home, where a decidedly non-poly-friendly car awaited.

During the sushi, the temperature had dropped about twenty degrees, and David seldom wears anything save for shorts and sandals. This made leaving him at the station while I ran dayo home, then returning to pick him up a decidedly less than attractive option. So, we all three squeezed into the car, dayo on David’s lap (to both of their delight, judging from the sounds), and we prayed for no intervention from meddlesome law enforcement types on the drive home.

dayo was quite keen to try out the Monkey Rocker, so we wasted little time getting it, and her, suitably prepared. Properly stripped, lubed, and sat upon it, she judged it quite delightful at first go, particularly with the added benefit of being able to make out with David while I sat behind her and felt her up in various strategic and sundry ways.

Some minor adjustment and tweaking of the Monkey Rocker soon proved to be necessary, as even the most well-designed of fucking machines might need a certain degree of fiddling when its victim user is blindfolded and not in control of the machine’s actions. (Have I mentioned how awesome it is that the Tango version of this particular machine has not one but two handles to control speed and vigor, and our heroine had not one but two people manipulating it?)

Once properly tweaked, it proved quite capable of eliciting a most delightful array of shudders, squeaks,a nd muffled moans. I’m sure the occasional teeth on the neck, nips on the shoulder, nipple twists, and unexpected touches from unknown sources helped as well, but no small measure of the credit goes, I think, to the design of the machine itself.

However, there is a very unfortunate circumstance that presented itself quickly thereafter, and one that needed fixing post-haste; David had, as it turned out, never used a flogger, or indeed even seen one used.

So, the long rolled-up carrying case of floggers and such came out, our heroine found herself bent naked over the reclining chair, and the lessons began. “Hold it like this,” I said. “Strike her here–”

“–and turn your wrist as you do it, so that you can keep up a steady rhythm, see?”

Now, a brief segue is necessary here. I keep my floggers in a padded canvas roll-up carrying bag, designed to be slung over a shoulder (or, more often, the end of my bed) to store them in a convenient and easy-to-access way. I unrolled the carrying bag on the couch, and the kitty Liam took rather a fancy to lying on top of the unrolled case, as he apparently quite likes the padding: 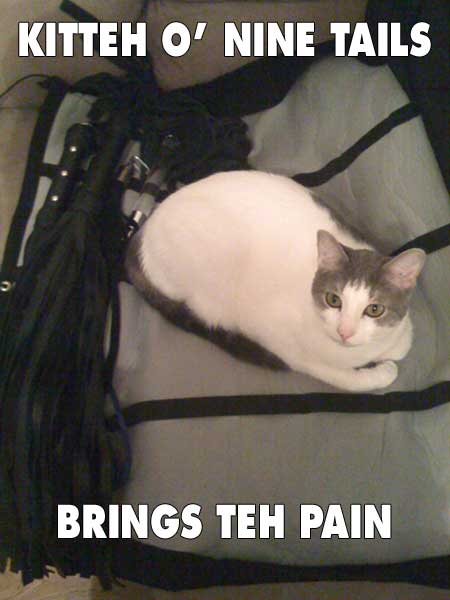 Anyway, the lesson proceeded apace, with David proving to be a quick study. We went over the various types of sensation produced by different styles of floggers, with suitable demonstrations on our heroine’s lovely backside, and discussed the finer points of conventional floggers vs swivel-handled and poi-handled floggers, the latter being something David was reluctant to use without greater practice. Our heroine’s ass turned a most lovely shade of red under our combined attentions.

But still something was missing, it seemed.

So, back into the bedroom for the crop. And the cane. And…well…

“On an overall scale from one to ten, a crop is probably about a seven or–”

So, yes, did I mention that her ass welts up very nicely, too?

“Though if you want something with a bit more bite to it, you can use a cane. This one is about a ten, isn’t that right?”

“And there’s a sweet spot, just below the curve of the butt, right about here…”

A considerable amount of live demonstration, accompanied by a more than fair amount of squirming and a certain volume of noise, entailed. But still, something was lacking…

“Now a lot of folks say a cane is about as painful as it gets. They’re wrong. This paddle here–”

“–looks very innocent, but on a scale of one to ten, it’s about a fourteen.”

It does look innocent, too. It’s made of deeply polished cherry, and it’s about a quarter of an inch wide, eight inches long, and an eighth of an inch thick. Most people who’ve felt it once won’t let me near them again with it.

That’s what was missing, the giggly, floaty endorphin high. I do so love when my partner starts laughing at every stroke.

There’s a postscript to this story. We all went to sleep soon after, with the Monkey Rocker, the box of gloves, the floggers, the lube, the crop, and all the various other implements still scattered about the living room. Now, that wouldn’t much matter, except that David and I had both completely forgotten that we were scheduled for pest control the following day.

We found the note saying the apartment had been serviced stuck on the door when we got home from work. I have no idea what the pest control guys thought, but I imagine there were probably some amusing stories told at pest control headquarters that evening.

52 thoughts on “After the Sushi”