This is the “town” of Venango, Nebraska: 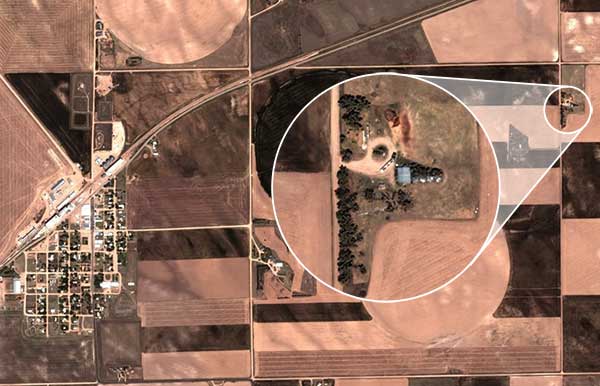 I put the word “town” in quotes because this particular town, the small cluster of houses and roads on the left-hand side of the image, has a population of around 170, no paved roads, and a single stop sign. If you like, you can click on the picture in order to see a larger view of the horror.

The house in the middle right, which I’ve enlarged in the inset, is the place I spent a number of my formative years.

Looking at the picture now, it’s amazing how little has changed in the twenty-six years since I left there. There used to be a barn just above the house, in the place where the rust-colored scar in the dirt is now, and the town used to have a few more people in it (at the time I lived there, the population was 242). Other than that, it looks pretty much exactly as it did back then.

I went to elementary school in a class of eight people–the largest the town had seen in a decade. The class one grade ahead of me had two people in it. If one were to plot a map of the popularity of the handful of kids at the school, I’d be at the bottom of it, no question about it. I was the only person in the entire school whose parents weren’t long-time Nebraska natives, and the only kid who didn’t much care for football. I was the only kid with a computer (a Radio Shack TRS-80). This, in an environment that prized conformity above all things–conformity of speech, of action, of thought.

Now, American schools are not, and never will be, places that reward anything but conformity. In this tiny town, though, it was as if someone had taken all the need for conformity, all the closed-minded intolerance, and all the petty asshattery you can imagine dredging up from the lowest strata of the human condition, and refined it, distilled it down to its purest and most elemental essence. The drive toward conformity permeated every part of the town, to where one could scarcely tell its citizens apart. It expressed itself even in the casual, offhand racism that made up the sum of the town’s attitude toward others–despite that fact that not one of the people I knew, not one single one, had ever even met any person whose skin was not white. Not once in their entire lives.

I survived the years in Nebraska by keeping to myself and by doing things that nobody else in the town could even understand, much less relate to. I built and flew model rockets (and occasionally lost them in the wheat fields surrounding the house), and I used antique bulletin board systems with a crude, slow 300-baud telephone modem that set my parents back some $600 (at the time, there were only a handful of such systems out there, CBBS Chicago and Magnetic Fantasies in California being the two I most strongly remember using). I read a lot, mostly science textbooks and fantasy novels.

And I developed a very strong, cast-iron case of don’t-give-a-fuck-what-other-folks-think.

Even back then, as the least popular kid in class, the one who was regularly bullied and beaten by the other kids at school (I particularly remember two rather obnoxious meatbags, both named Mike, who everyone called Mike A. and Mike C.; I don’t remember their last names, though I distinctly remember a number of thrashings at their hands), I would not even for a second have traded lives with any of them.

At the time, living in that benighted hellhole was the worst, most miserable thing I could possibly imagine. I came away from it with an ironclad belief that my life belongs to me and it simply does not matter what anyone else thinks of that, and that’s really not such a bad place to be.

I’m curious whatever became of Mike A. and Mike C. I suspect they didn’t escape.