On the drive down to Florida Poly Retreat a few weeks back, I had an epiphany.

You see, I’ve always harbored a not-so-secret desire to crush the earth beneath my iron boot, but in the past twoscore years, I’ve made very little progress toward realizing that goal. And it occurred to me why that is. I’m actually very optimistic about the state of humanity, and unbridled optimism about the human condition doesn’t lend itself to the kind of monomaniacial dedication required of a true James Bond-class villain.

There is a reason I am an optimist. That reason emerges directly from the fact that I do not believe in god.

This might seem, at first glance, to be something of a contradiction. Many people cling to a belief in some kind of divine, personally involved caretaker high up in the sky precisely because it’s the only way they can find optimism and not despair. There’s even a Web site set up by a Fundamentalist Christian organization that is organized around the idea “if you don’t matter to God, you don’t matter to anyone.” The site is advertised by banner ads like this one, showing some gangster wannabe who, without God, presumably has no reason not to blow your punk ass away:

I find this attitude, that without god there is no morality and no meaning or purpose in life, very, very interesting…more for what it says about the people who subscribe to it than for anything else. The Web site that this banner advertises is strongly anti-evolution and pro-creation, and I think that’s extremely telling.

There are, I think, two driving forces behind much of religious thought: fear and despair. The despair comes from the idea that human lives and human achievement are without meaning or purpose in a universe without god, a universe where we are the natural result of natural processes on an insignificant and not terribly remarkable part of an insignificant and not terribly remarkable galaxy lost in a universe that is quite literally inconceivably huge. When you look at an image taken from the Hubble Deep Field camera of a teeny, tiny patch of sky, and you see that everywhere in the universe, as far as you can look, you see not hundreds or even thousands but billions of galaxies, and every one of these galaxies is made up of billions of stars, and we occupy such a tiny sliver of this universe that our entire galaxy could vanish or be destroyed in some kind of cataclysm and the universe would scarcely even notice, some people get all freaked out. 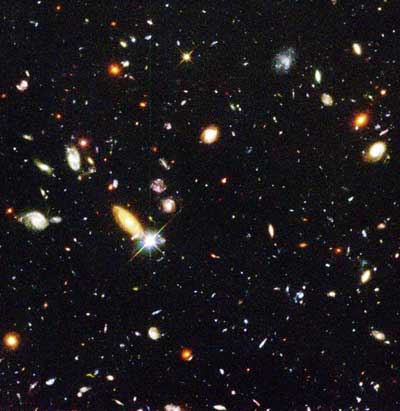 Every object you see in this picture with the exception of the bright object in the lower left of center (which is a star in our own galaxy) is an entire galaxy. The scale of the universe beggars comprehension, and we feel insignificant.

So the creationists, who never open their mouths without subtracting from the sum of human knowledge, invent a new universe to satisfy their need to feel special. They imagine a tiny universe, a limited universe, a universe only a few thousand years old, a small place containing a world (which is seventy-five percent water) deliberately created just for man (who has no gills). They post videos on YouTube arguing that the hand of god is clearly visible in the banana, which with its convenient wrapper and hand-pleasing shape was deliberately designed by a benificient creator to fit easily in our hand and be eaten–though they ignore contradictory evidence, like, say, the coconut. Or, they argue, since the evolutionary idea on the origin of life claims life can begin when non-living matter is exposed to radiation, then how come life doesn’t spontaneously begin from other non-living matter, like peanut butter?

It’s easy to mock creationists; they’re just so cute when they pretend to be scientists! But their folly isn’t born of stupidity; it’s a product of the very human need to feel special and significant.

When you add the Void to the mix, the problem becomes even greater. Human beings have the cognitive tools to generalize from their experiences and make predictions about future events, and that gives us the capacity to realize that one day we are going to die. Facing the Void is, for many people, the very embodiment of stark raving terror. We are going to die. There will come a day when we will be gone, and there is nothing we can do about it.

So we as a species respond the only way we can: by denying it. We pull the shade down over the Void, and then decorate that shade with an entire bestiary of gods and demons and angels and supernatural forces of all descriptions imaginable who will protect us from the certainty of death. When you look at all the various gods and deities people have worshipped throughout history, all the supernatural beings we’ve ever believed in–the sun gods worshipped by almost all hunter-gatherer tribes; the god Tezcatlipoca of the Aztecs; the various gods of the Egyptian pantheon; the feuding, spiteful divine teenagers of the Greeks; the vengeful, erratic, emotionally volatile god of the ancient Israelites–one thing becomes very, very clear: these gods are all us. All these divinities are distorted, funhouse mirror caricatures of humanity. We pull the shade down over the Void, then project onto it ourselves. All our fears, desires, petty insecurities, all our need for conformity and control, all these things are reflected in the gods and demons and pixies and faeries we invent. All these dim, distorted projections, created to convince ourselves that the Void is not real.

And it works. The first time I was confronted by the Void, at about thirteen years old, the thought of going to heaven was the only comfort I could find. When I lost that, I lost my only defense against the Void, and that’s not easy to do. These crazy funhouse projections serve a purpose.

But there is a price to pay for this comfort, one that I suspect many people aren’t even consciously aware of.

Part of that price is truth. If one cares passionately about the truth, one can not help but notice that every time a religious entity has disagreed with empirical science about some matter of empirical fact about the physical world, the religion has been wrong. Every single time, with not one single exception. The creationists seek meaning and purpose by believing themselves to be the favored of a supernatural entity that created the whole of the universe just for us, yet this belief requires them to imagine a universe much smaller and much younger than it actually is. Their need for meaning, their desperate desire to feel special, causes them to adopt the notion that the whole of creation is only six thousand years old (5,997 years, according to Orthodox Judiasm; Fundamentalist Christians put the figure at about ten years older), in spite of massive, overwhelming evidence to the contrary.

And this notion leads naturally to other notions as well, including the idea that humanity, the favored of the divine architect of the universe, can do no wrong. Environmental responsibility? Social responsibility? Outmoded beliefs of godless liberals; we were given divine sanction to do as we please, and that’s exactly what we should do.

God made the universe for us. We are the most important things in all of creation. The world was put here specifically for the purpose of housing us. If we believe this, we will never die; God won’t allow it.

When people let go of the idea of god, they’re left with a sense of despair. If there is no god–if we are simply the result of natural, mindless forces operating in a universe that is incomprehensibly huge and incomprehensibly ancient, a place that is steered by no divine force and a place where an airless rock is just as good as a planet teeming with life, then what meaning can any of us have? What meaning can any of our struggles and triumphs have? What point is there?

And that attitude, tragically, misses the point entirely.

For you see, if we were made a brief time ago in God’s image and put here for the sole and express purpose of worshipping and exalting God, then what we are now is what we will always be. There is an upward limit on the things we are capable of. We are born disgraced, pale shadows of the original models who fell from that grace, and our job is to struggle through this brief life of misery and tears hoping we somehow manage to do and say the right things so that god will rescue us. We have no purpose other than that which is given to us by god–and looking around, I gotta say it’s not much of a purpose.

But if we are evolved monkeys…

Ah, now things are different. If we are evolved monkeys, if we are the result of natural processes that conspired across a vast sea of time to give rise to sapient, self-directing entities capable of understanding themselves and the physical world, then all bets are off. Now, there is no limit to what we can become. Now, anything within the physical laws of the universe is potentially within our grasp. Now, we have the power we once reserved to our gods; now, we can, through the application of our will, make of ourselves anything we choose to be.

Without god, however, all things not disallowed by the fundamental laws of physics really are possible. Without god, we make our own meaning and purpose; and that power lets us use the gifts granted to us to transform ourselves and the world around us in any way we want.

This power fills some people with fear. Without god, they say, how will we know what is moral? Without god, they say, what punishment can there be for people who do things that are wrong? To this I say: Your morals, given to you by your belief in god, allow for the most appalling atrocities, historically and today. Your morals teach that some human beings, simply as a result of the way they are born, are inherently unequal to others. The notion that there is one and only one right way to live is the cause of more human suffering, more grief, and more evil than any other single idea in all of human history. This is your morals? Your morals, like your gods, are a distorted mirror of your own prejudices and your own evil. You will not find heaven by backing away from hell; the fear of retribution is not the path to enlightenment.

We don’t always make good choices, it’s true. But we’re still a young race. And I am very optimistic about what we can accomplish.