Skip to primary content
Enveloped in a sentiment,
a sound that rushes over me.
Engage an impulse to pretend
I have a faith as pure.
Not forgetting what it means to dream,
Indulging everything,
Entertaining thoughts that I’ve the strength
of those I yearn to be.

My iPod tends to get into moods. I listen to it whenever I do a lot of driving, using a gizmo that lets me play it over the car stereo. Saturday, I drove from Gainesville to Tampa for indigofae‘s birthday.

I didn’t actually listen to the iPod for most of the trip, as I spent the bulk of the journey talking to istislah, who I met just in time for her to move to Seattle, and as it turns out I stayed on the phone with her right up to the time I arrived at the restaurant to greet indigofae, her partner nekidsteve, and her friends for her birthday dinner.

I did, however, listen to the iPod after dinner, while we all travelled to the local goth club for some dancing. I almost always listen to it on shuffle, and (as I mentioned before) it tends to get into moods. It’ll get into an industrial mood one day, a neo-folk mood the next…it’s a moody piece of technology.

Anyway, the iPod was in a VNV Nation mood on the way to the club…which, as it turned out, would be the theme of the weekend.

When we arrived at the club, the DJ was playing–you guessed it–VNV Nation. We stayed until close (indigofae has a rather astonishing number of bandwidth-crushing images here), and the DJ played–wait for it!–more VNV Nation just before closing.

Later in the weekend, I got to help take smoocherie‘s virginity, and I got pictures. More on that in a bit.

I believe that we’ll conceive
to make in Hell for us a heaven.
A brave new world
A promised land
A fortitude of hearts and minds.

We no longer have a bed in the apartment in Tampa. The king-sized, cast-iron canopy bed I love so dearly is now in Gainesville, where it utterly dominates the living room. Shelly found a tiny, one bedroom apartment in Gainesville, not realizing we’d end up sharing it for a time, and there’s simply no room for it in the bedroom. So it occupies half the living room, where it makes an admirable conversation starter if nothing else.

So I brought an inflatable air mattress with me to Tampa. Sheets, too. And a comforter. What I did not bring was a pillow. And sleeping without a pillow sucks. Particularly when one does not get home ’til almost 4 AM as it is.

I did finally sleep, and woke up later than I intended on Sunday. This means I headed across the state to visit smoocherie later than I had planned to on Sunday. I did finally get there, though, a tribute to my nice new big hippocampus1 (thank you, World of Warcraft2!), and spent some quality time with her, another of her sweeties james_the_evil1, and mladypain. James made dinner for us, we watched a Showtime series about qa serial killer police officer (in Hollywoodland, every major city has at least three or four serial killers running around at any given time–it’s one of those unwritten rules, like the one that says the villain in action/adventure flicks always wears cool sunglasses), and we got some serious poi-spinning time in. More VNV Nation–poi spinning is always better set to music–and then smoocherie and I got to spend some rare alone time together.

I won’t disturb you with what happened next, because it would…disturb you. This isn’t the part where smoocherie loses her virginity; I’m getting to that.

Eyes betray the soul, and bare its thinking.
Beyond words they say so many things to me.
A stranger here, reborn, it seems
Awaking wonders deep in me.
If nothing’s ventured, nothing’s gained,
So I must seize the day.

Monday was surprisingly productive. I’d loaded the laptop with client files, so i was actually able to get quite a bit of work done. smoocherie worked in the office, I worked in the kitchen, and I was very pleased. Changing environments from time to time really does seem to help my productivity.

Later that night came the deflowering.

smoocherie has totally hooked me on spinning poi, and she and I have been doing it whenever we spend time together lately. That night, for the first time, she actually spun fire.

And I got pictures! Lovely pictures! 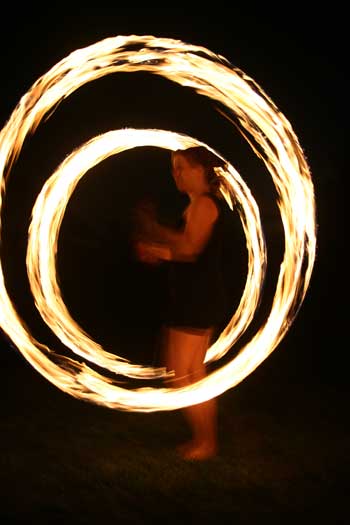 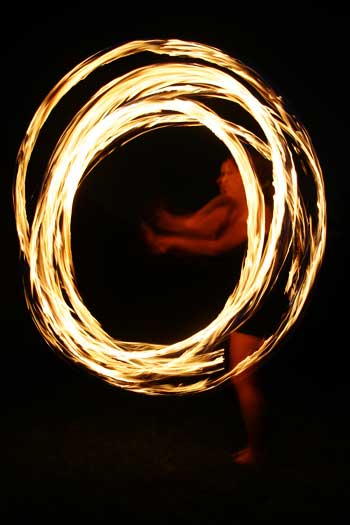 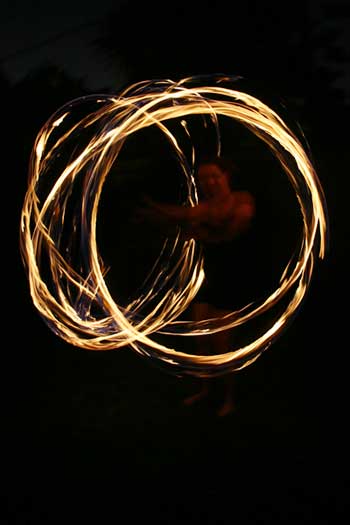 I will be graduating to fire soon myself.

And fighting time, so hard I pray
That this moment lasts forever.
And will the world stay standing still, at least for me?
Through my eyes, stare into me,
I bare my heart for all to see,
With my face turned to the sun, there ever standing still

Yesterday was a wash–the trip back to Gainesville took all day, as I first had to return to Tampa and run some errands which devoured far more time than I expected. Hofstadter’s Law says everything will take longer than you expect, even if you take into account Hofstadter’s Law, and it’s rarely untrue.

The upcoming couple of weeks look to be busy ones. This weekend, I’m driving to Atlanta, with the goal of finding an apartment. The facility that I’ll be working in is in Norcross, just off Interstate 85; anyone happen to be familiar with the Atlanta area and know of any good places to live around there?

The following weekend, I’m driving back down to Tampa, packing the rest of the apartment into a moving van, and heading to Atlanta for good.

I have mixed feelings about the move to Atlanta. On the one hand, it signifies the end of all our financial troubles, and has the potential to make me fabulously wealthy. On the other hand, in two weeks all of my relationships become long-distance. I’ll be five hours from Shelly, and farther still from joreth and smoocherie. I feel like the relationship with smoocherie has actually grown more in the past three months or so than in much of the time before that, which is wonderful…but the timing sucks.

In many ways, she and I have been victims of bad timing since the start; it’s actually a testament to…well, to stubbornness, I suppose, that things have worked as well as they have.

Still, I’m mostly upbeat about it. The past three years have been nonstop financial stress, and now that that’s lifting, I can definitely feel a difference in my mood. I don’t much cotton to the idea of moving to a new city alone, though.

2 …thanks, in no small part, to World of Warcraft. I’m not kidding. The game requires a good sense of direction (or at least, makes a poor sense of direction very frustrating), and I honestly think my spatial sense has improved since I’ve been playing.

22 thoughts on “The Weekend In Summation”