Skip to primary content
Chapter 1: These Homies are Chillin’ in their Low Ride!

I just want to get that out of the way before going any farther. U-Haul’s online reservation system is truly Teh Suck. It could suck a golf ball through a garden hose. If the suck of the U-Haul reservation system could be harnessed and used for good, it could replace gravity. It’s a good thing the rest of U-Haul’s customer service system blows to the same degree, to equalize the pressure.

As anyone who’s been reading this journal for a while knows, I’m in the process of moving. Specifically, to Atlanta. Two weeks ago, I found an apartment up there; last weekend came the Big Move. (Well, of my stuff, anyway; I’ll be staying in Gainesville for the next couple of weeks or so, and I’ll be in Tampa for Necronomicon next weekend.)

Anyway, before the move, I used U-Haul’s Web site to reserve a truck and one of those things you use to drag your car behind the truck, one way, Tampa to Atlanta. On the day of the reservation, I got a text message on my cell phone telling me the truck and car-towing-thingie were ready, and giving me the address of the place to pick them up. Got an email with the same information. Being the suspicious bastard I am, I called the location. “Oh, sure, come on down! We have the truck!”

They didn’t have the truck.

It took them a little over an hour to figure it out, but they didn’t have the truck. They did, however, have a slightly bizarre toy for sale: a plastic car that lights up and bounces up and down when you push a button, all while playing hip-hop music: 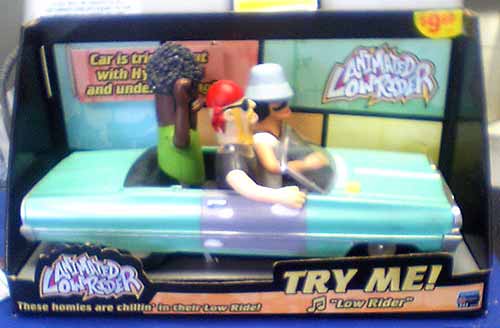 It’s a weird little slice of urban Americana. The three people in the car are racially balanced–one white guy, one Latino guy, one black guy–though I couldn’t help but notice that the black guy is riding in the back. The text on the bottom of the box reads “These homies are chillin’ in their Low Ride!” Now, for fifteen points: How many stereotypes can you find in this one toy, available for the low,low price of just nine dollars and ninety-five cents? I bet it’s probably made in China, though I didn’t think to check.

Anyway, after an hour of waiting, the U-Haul location determined that, text messages and email and phone conversation to the contrary, they didn’t have my truck. The guy called around a few places, found a place that did, and sent me over there.

Another hour in the second place, and we were ready to g–oh, no, wait, I reserved a hand truck, and they didn’t have one available. Some searching around, and…hey, wait, we have an appliance dolly, will you take that instead? Oh, and we don’t have that doohickey that tows your car by the front wheels, we just have one of the big flatbed things that you drive your car up onto. How’s that sound?

Appliance dolly in the back of the truck, flatbed trailer in tow, and joreth and I were off to the apartment for some backbreaking physical labor.

Chapter 2: In which we learn that Franklin sucks at moving heavy objects

There is a warning on the U-Haul appliance dolly. It warns that the dolly can be recognized as U-Haul property just by its design alone, and that anyone caught in possession of it without a rental contract may be prosecuted for possession of stolen property.

Now, the U-Haul appliance dolly has a very, very short foot. So short, in fact, that it’s very awkward to use. U-Haul specifically designed, engineered, and built a custom hand cart just so they could be recognized if someone walks off with one, but from all appearances, the usefulness of the hand cart in tasks such as, say, moving heavy objects was not a primary design consideration.

I have a bookshelf. It’s a very large bookshelf, about seven feet tall, made of dense particle board. It weighs more than I do. In fact, I believe it weighs more than Joreth and I put together. If a person were to, hypothetically speaking, load it on an appliance dolly, and then, just as a “for instance,” cart it over a doorstep, and this hypothetical doorstep were, say, about four inches high, and while doing this, if my thumb were to get between the appliance dolly and the bookshelf, so that the bookshelf dropped that four inches onto my thumb…if all these things were to happen, then one might expect a certain amount of hopping about and swearing might follow very shortly thereafter.

This set something of a tone for the rest of the packing process. I tripped over, walked into, barked my shins on, and otherwise injured myself with approximately three-quarters of my possessions, and I own a lot of crap. joreth did her best not to laugh, a heroic effort that can not be understated.

About three hours into this process, I got a call from U-Haul. “We’re showing that you have an equipment reservation for today. Are you planning to come in and pick up your truck, or should we cancel your reservation?”

Looking back on it now, perhaps I should’ve told them to cancel the reservation, because then, hey, they’d probably forget they even owned the truck!

After she’d finished studying, Shelly came down from Gainesville to help finish the packing and whatnot, arriving just in time for dinner. The rest of the packing went quickly, if a little haphazardly, and in no time the truck was buttoned up and ready to go. Night had fallen with a particularly wet thud, so we finished up in total darkness.

And then came…time to load the car trailer.

Which is very large.

It’s actually possible to carry on a surprisingly lengthy conversation using only the words “back,” “forward,” “left,” and “right,” provided you don’t want to talk about anything other than moving backward, forward, left, and right. We did eventually get the trailer hooked up…not by any particular skill on our parts, I think, but rather through the well-known Heisenberg Uncertainty Principle of Automobile Motion. As anyone who’s ever passed the second grade knows, this uncertainty principle is given by

where delta-X is the change in the distance from the hitch to the trailer, delta-f is the change in frustration of the driver, i is the importance of getting the goddamn trailer hooked up right fucking now, U is the U-Haul Constant (a universal property subject to change without notice), n is the number of tries you’ve made so far, and lambda is the wavelength of light most likely to give you a headache. As is intuitively obvious to the most casual of observers, the more frustrated you are and the more important it is that you get the trailer hooked up right fucking now, the more tries it can take, all other things being equal.

Chapter 4: These Homies are Cranky in their Tall Truck

In a desperately underpowered Ford POS towing a car on an absurdly large trailer, it’s a little more. Especially when one has not showered and feels like the inside of a yak’s armpit.

Shelly and I stopped in Gainesville long enough to fail to sleep because the cats decided that five o’clock in the morning would be an ideal time to start playing, and the game they agreed on was “let’s knock everything off all the desks and then chase each other over the human’s bed.”

The cats were asleep when we left, the furry little bastards. The trip to Atlanta wasn’t as bad as it could have been–we could have been on fire, for example–and the unloading of the truck once we arrived went smoothly and effortlessly.

As it turns out, there are people who will–get this–actually unload a truck for you, if you give them this thing called “money.” The joy I felt on discovering this can not be overstated. We’re talking the rapture of the angels, here. We’re talking music of the spheres, winning the Lotto, George Dubya’s term in office ending, and finding free pr0n on the Internet all rolled into one. Now that I have learned this Very Important Thing, I will never unload a moving truck again. “Not unloading a truck full of crap” ranks surprisingly high on the list of Things That Make Me Happy.

Pausing only to buy some new pants, fill up with gas, and leave my toothbrush and cell phone charger in Atlanta (goddammit), we headed back down to Florida at a much more reasonable speed, detouring through Tallahassee long enough to visit Shelly’s sweetie there. And when we got home…

The set of fire poi I ordered arrived. I need to practice with them sans fire until I’m reasonably sure I won’t set myself on fire when I use them (because it could always be worse until you’re on fire, and at that point it’s difficult to say ‘it could be worse’ any more). With a bit of luck, I can arrange to have smoocherie be there when I light them up for the first time, because after all, she is the reason I’m into poi spinning in the first place, and I did take her virginity and all. So how ;bout it, smoocherie, you going to be available before I leave Florida for good?

26 thoughts on “On Moving to Atlanta”