So. Back from Dragon*Con and back into the work week; I haven’t had time to post ’bout the con, and this is not that post. Perhaps later. 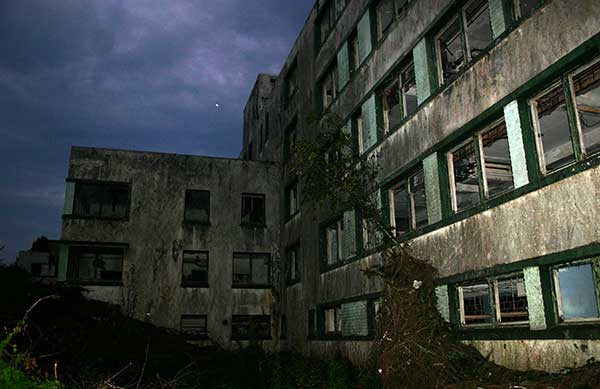 Sunland is a ruined insane asylum for children, located in Tallahassee not too far from where Shelly’s sweetie lives. It started out in the mid-1950s as a tuberculosis ward, and was repurposed when a vaccine for TB was developed. It spent the rest of its existence as an asylum, primarily for children, until it was abandoned a couple decades ago. It’s sat there ever since, slowly crumbling away. There’s a badly-written Wikipedia entry about the place, in fact.

When we drove back from Dragon, we stopped for an impromptu photo shoot at Sunland. We arrived as the sun was setting, and as a result couldn’t enter the buiilding–poor light, treacherous footing, and tons of broken glass (literally–every window in the building has been shattered, and there are thousands of pounds of glass strewn everywhere) made entry too dangerous. But we got some great shots nonetheless, which I’ll likely be posting over the next few days.

42 thoughts on “Fun at Sunland”