I’ve resisted seeing it, because I am very skeptical about television sci-fi in general, and because the original series (which I saw–quick, how old does that make me?) sucked so badly. So very, very, very badly.

Anyhow, Shelly and I rented the miniseries that started the series last Sunday–or rather, Shelly rented it, and I didn’t raise any objections. And, surprisingly, it’s really very, very good. It pays a wink and a nod to the original series without being hokey or lowbrows, and the characters are surprisingly complex and nuanced.

About a third of the way through, Shelly remarked, “You know, the Cylons are looking like the superior race here.” And y’know, she’s right.

For anyone who’s not up on the show, the premise concerns humanity’s flight from the evil Cylons, a race of intelligent machines originally created by humanity, who revolted and declared war on their former masters. Humans kicked metallic ass, the Cylons disappeare; then, four decades later, reappeared and staged a massive nuclear attack on every inhabited human planet, virtually exterminating us. One large interstellar warship, a handful of civilian ships, and a few tens of thousands of humans escaped, and the show concerns their flight from the Cylons.

So there’s the premise. There are a thousand ways to butcher that premise on television, most of which were visited upon the original series, a show cheesy almost beyond belief; the new show, on the Scifi channel, is actually remarkably good.

Good, for a study in anti-transhumanism, that is. See, here’s the thing. A minor plot point revolves around one of the characters being diagnosed with terminal cancer. Now, the interesting thing about that is here we have a society that has bridged the stars, created enormous faster-than-light spacecraft, but has no effective treatment for cancer.

That theme continues in other ways. The commander of the heavy cruiser from which the show takes its name is in his 60s, and near retirement; no longevity. Sophisticated computers? Outlawed. You get the idea.

The good guys here are the neo-Luddites; the villains bent on the total destruction of all humanity are the progressives.

Halfway through the miniseries, and I’m kinda thinkin’ I’m rooting for the wrong team here.

The Cylons are effectively immortal; if one dies, its consciousness, memory, and identity can be transferred to a new body. In almost every respect, they outmatch humans–they can integrate with other computers to a very high degree; they’re faster and stronger; they are technologically and intellectually more sophisticated…oh, yeah, and did I mention they’re effectively immortal?

Essentially, what we have here is a war between backward, technology-fearing neo-Luddites and the smart, sophisticated, highly capable adversaries created by humanity. And,y’know, it’s kinda hard to think that the Cylons don’t have a point here. Create a self-aware machine, treat it like a thing rather than a person, what do you expect? And it’s not like we’re above exterminating our adversaries (or, for that matter, ourselves).

Frankly, my money’s on the Cylons. And, honestly, my sympathies lie in that direction as well.

And the new models are pretty hot, too. 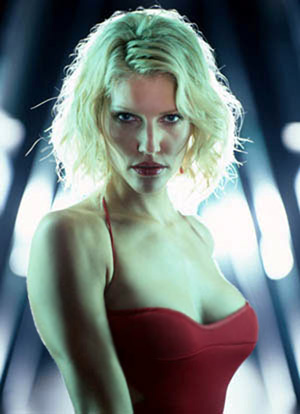 26 thoughts on “BSG as a meditation on anti-transhumanism”