Snow Crash, the tabby cat, is not an extropian.

Snow Crash has spent much of the past week in hiding. He quickly learned to open the cabinet beneath the sink in the bathroom, and there he has stayed, hiding from the frightening and overwhelming upheaval in his environment: 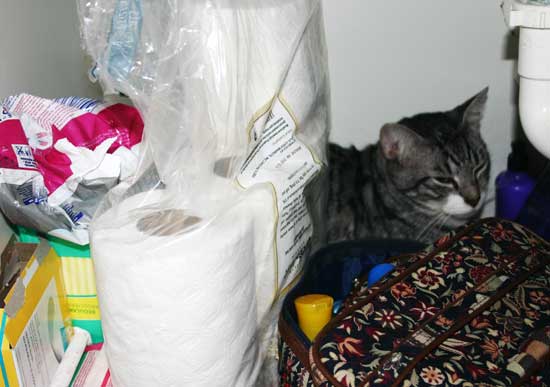 Molly, on the other hand, is having a ball. She loves very little more than exploring new places, and the new apartment, with boxes piled to near-ceiling height everywhere, has given her endless little nooks and crannies to explore. She’s had a blast poking her nose into, under, over, around, and through everything she can find, and just to make things even more delightful, it all keeps changing! Every time we come into the new place with another armful of boxes, we rearrange stuff and there’s more to explore! If she could have her way, I’m sure she’d have us move twice a month. I don’t think Molly has stopped purring since we took her over.

According to the Myers-Briggs theory of personality types, the majority of the population, by a wide margin, is “Guardian” personalities. Guardians, the theory goes, are people who favor consistency, conformity, rules, order, and continuity in all things. Guardians are uncomfortable with change, particularly social change; fond of hierarchy; and feel threatened when things stop being like they were. A Guardian is the personality most apt to say things like “We do it this way because that’s how it’s always been done.” Far rarer are personality types which embrace and even thrive on change, which discard systems that don’t work well and refuse to cling to them merely because they are traditional.

Now, you may argue that the Myers-Briggs personality types are flawed. The granularity is poor; there’s a lot of overlap within the personality types…whatever. Be that as it may, there are clearly people in the world who favor continuity over function, who feel threatened by change, who prefer safety and stability even when that stability comes at a cost to others; and there are people in the world who embrace change, who seek to improve the way things are done, who look to drive society forward, technically and socially. And no matter which way you slice it, these two philosophies are inherently incompatible.

America in the dawn of the 21st century is a bad time and a bad place for social conservatives.

On the surface, this may seem like a wonderful time to be a social conservative. The conservatives dominate all aspects of American politics; Fundamentalist Christianity, and the rigid, dogmatic inflexibility that accompanies it, is so powerful that the American president is among its number; the political party to which he belongs has become little more than an extension of the ultraconservative religious right, and has openly embraced and championed the causes of social conservatives. A good time to be a conservative indeed.

But do you feel that? That vibration underfoot? Bet you thought that was the enormous, unstoppable juggernaut of conservative zeal passing by, right? Wrong. That’s a seismic shift. That’s tremendous pressure building up along the fault lines of American social politics. That’s the earliest warning signs of an approaching earthquake that will rearrange the landscape in ways that many people don’t have even the slightest idea about…at least not yet.

You can already see some of it coming. The skirmishes being fought right now over gay marriage, over polyamory, over the asinine and intellectually bankrupt doctrine of “intelligent design,” these are the opening salvos in what will be a long, bitter war whose outcome is already decided.

Every single time the Guardians have waged war against social change–every single time, from the days of Galileo to the end of slavery, from the civil rights movement to women’s suffrage, every single time the Guardians have lost. Change is inevitable. Social progress is inevitable. No matter how many times we go down this road, the result is always the same–the people who have been denied their full and complete participation in society at large win in the end. Always. Gay marriage? Get used to it; it’s going to happen, just as surely as the end of slavery. This is a story we’ve seen before, and no matter how the forces of tradition may scream and fight (and plant bombs and drag people behind pickup trucks), anyone with any understanding of society already knows how this story will end.

And in the grand scheme of things, it’s nothing, really. It will make as much difference as the elimination of ancient and bigoted laws barring mixed-race marriage made–society, if that’s all that changes, continues on more or less as it was before, despite the inane squawkings of a few indignant traditionalists. The sky didn’t fall when women started voting, the world didn’t end when blacks married whites, and the universe won’t collapse when men marry men or women marry women–by and large, it’s just not really going to change all that much.

But that’s only the tip of the iceberg. The social conservatives who fear gay marriage, polygamy, and the teaching of evolutionary theory are missing, as they often do, the real upheaval.

Snow Crash is not an extropian.

Snow Crash is not an extropian. It’s hard to be an extropian when you fear change. Extropians and transhumanists generally have noticed something that other people have missed–the technological and social change gripping the world right now, the shifts in society and gender and economics and politics that are fuelling wars and creating redefinitions in the most basic institutions of Western society, these aren’t like other changes. These are the tip of the iceberg–because now as never before in human history, technology is changing in ways that are increasingly rapid and increasingly unpredictable. We’re nearing the really bendy part of the exponential curve, the part where things start getting really, really interesting.

We like to think we’re advanced. We like to think the Information Age is a marvelous new thing, that we’re enlightened and advanced far beyond those poor primitive savages who lived, oh, a hundred years or so ago. In reality, this is nothing like the truth. The most advanced technology we possess today is still embarrassingly primitive, still just a notch or two up from flint knives and bearskins. Our ability to make things is still horrifically crude, wasteful and inefficient, little more than increasingly sophisticated variants on the same old primitive themes we’ve been using since far before the Industrial Revolution. But that’s changing, and if you think that wars for oil and social chaos because a couple gay men in San Francisco want to marry each other are a big deal, you ain’t seen nothing yet.

Back in the 1800s, the official stance of many religions was that black people did not have souls. This was a socially convenient stance, because if these people didn’t have souls, then they weren’t really people at all; the thing that separates man from the lesser animals, it was reasoned, was possession of a soul, so if black people didn’t have souls, then that cleared the way for exploiting them the same way one might exploit an ox.

We are social beings; we live in a social landscape every bit as real and relevant as the apartment my cats are in. Right now, we are where the cats were a couple weeks ago–a few little things are changing, stuff is disappearing from the shelves and cardboard boxes are appearing on the floor. Something’s up. We have an advantage over the cats, though; they could not possibly hope to anticipate the cataclysmic rearrangement of their lives that was coming, whereas we can, if we have the wit to do it, look ahead and see that these things are signals of a greater change than we might imagine, and see that our entire environment is about to be turned upside-down.

Snow Crash is not an extropian. Molly, though, very well might be. And there’s a lesson in there.

Snow Crash was, and still is, traumatized by the move. Molly could not possibly be more delighted. The move was inevitable; neither one of them could have done anything to stop it. But one of them is happy and the other is not, and the choice about which to be is a choice we can make.

Shelly argues that you don’t have to be a neophile to be a transhumanist. That may be so, but it certainly helps. And in times like these, those of us who embrace change, who welcome it and adapt to it, have an enormous advantage over people who don’t.

50 thoughts on “My kitties are a metaphor for social change”