Way, waaaaaay back in 2010, I created a Venn diagram (well, if you can still call something a Venn diagram when it has dozens of bits that intersect in some pretty mind-bending ways) of the variations of non-monogamy I’ve observed.

The Map of Non-Monogamy ended up all over the Internet. I’ve seen it in Fetlife, presented at academic lectures, and I know of at least one Masters thesis that includes it.

Now, after seven long years, I’ve finally done an update, significantly redesigning it and adding relationship anarchy and solo polyamory. Here, in all its glory, is the newly redesigned Map of Non-Monogamy. The preview here is teensy, so you can click on it to embiggen. 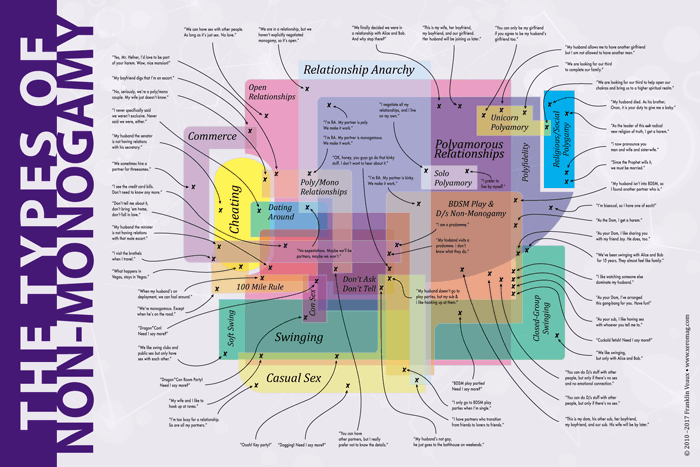 I’ve redesigned the new map as a (big!) 24×36-inch poster. So what say you, O Internet? If I spend a lot of money to have them printed (printing posters that big ain’t cheap!), would you buy one?

[edited to add] You can now pre-order the poster! It will ship in late January or early February. Preorders are $15 for one poster or $100 for ten. Pre-order a poster here!

Last weekend was edwardmartiniii‘s birthday. Entirely on his own, with no input from me, he chose a theme for the party: a Mad Science Fair. Kind of like the science fairs that grade schools and high schools have, you see, only with significantly more insanity.

Regular readers of this blog are no doubt familiar with the ongoing saga of my quest to make a cheap, homebrew, thought-controlled sex toy.

And, thought I, what better Mad Science Fair project than the thought-controlled toy?

Which is hella cool, if you ask me.

Well, kind of. Sometimes years go by between writings.

Anyhow, one of the stories I’ve written is a sprawling (about 110,000 words and still counting) series called “Training,” an unfinished first draft of which I’ve put on literotica and a finished, edited version which is available as an ebook. The story has proven to be extremely popular; Amazon sales of the story help pay my rent, in fact.

I maintain an email address just for emails about Literotica stories, since Literotica has a system whereby people can send anonymous emails to story authors.

I get a lot of email about this story. A couple days back, I spent an afternoon going through the emails doing a statistical analysis of people’s reaction to it. There’s a lot of things about the emails that people semd me which I didn’t really expect. This post is a breakdown of that analysis.

When people send an email to a story author from Literotica, the email is anonymous, and does not reveal anything about the sender unless the sender specifically chooses to do so.

Unsurprisingly, email from women outnumbered email from men, at least among email where the senders revealed their sex:

Among people who chose to reveal their sex, women outnumbered men by almost exactly 4:1, which is consistent with the overall demographics on Literotica. This strongly suggests that women and men are almost perfectly equally likely to respond to a story on Literotica by emailing the author…at least if we disregard email from folks who choose not to reveal their sex.

END_OF_DOCUMENT_TOKEN_TO_BE_REPLACED

[Edit]: Can’t get enough non-monogamy? Check out the book!

The Map of Non-Monogamy I’ve posted on my journal already keeps generating a ton of email, and I’ve realized that there is still another category of non-monogamous sexual behavior missing from it.

So, here it is yet again, in what is hopefully the final revision (ha!). The Map has gotten quite a lot more complicated, and I’ve added a number of new examples and clarified some of the old ones. I’ve also added borders around the various overlapping sections to make them easier to see. Oh, and polyamory intersects with swinging now–it was supposed to from the beginning, and I’m not quite sure why it didn’t.

If you translate it or blog about it and you’d like me to link to your translation or article, let me know! I’m also planning, eventually, to add a Sexual Informatics section to the Xeromag.com Web site, which will have this and all the other sexual informatics charts and maps I’ve done, probably in a more interactive format.

As before, click on the picture to see a much, much larger version.

[Edit] There is yet another update to the map here. You can also find my book on non-monogamy here.

Because my brain is totally broken…

I woke up very, very early this morning and couldn’t get back to sleep, because it suddenly occurred to me that entire classes of non-monogamy were missing from the last version I did. Plus, I thought of a lot more edge cases. And since the only way I can get this stuff out of my head is to put it on the Interwebs, here it is!

As before, click for a bigger version. A much, much bigger version, that will pulverize your bandwidth the way Chuck Norris pulverizes your pelvis. Or something. I don’t know.

A while back, I did a graphic of the various overlapping types of non-monogamous relationships. I’ve re-visited that chart, with some revisions and additions, and at zaiah‘s suggestion I’ve added some specific tags to various parts of the graph.

I’ve been told, many times, that the word “polyamory” is not really necessary, as it’s simply a synonym for “open relationship” or “swinging” (or, depending on the person talking to me, “cheating”). This idea seems to assume that there’s really only one kind of non-monogamy, which is kind of silly.

I started thinking lately about the various ways in which a relationship can be non-monogamous, and the intersections between different sorts of non-monogamy, and after tinkering around with the notion for a while I’ve come up with this diagram.

And then there’s con sex, which overlaps with a whole lot of other stuff. But someone could probably write an entire book about con sex. And now that I think about it, I’d probably read it.

In the study of stellar evolution, there is this concept called the main sequence, a well-defined band that you see whenever you survey all the stars in the sky and plot their color on one axis and their brightness on the other. Not all stars fall into the main sequence, but the vast majority do; there’s even a lovely image of the graph here.

It seems the same is true of relationships. Stellar evolution and stellar nucleosynthesis map with remarkable fidelity onto relationships, I’ve observed, with a plot of “intensity of relationship” (as a function of emotional investment and expectation of continuity) vs. “sexual boundaries” showing patterns startlingly similar to the main sequence. At least to me.

So for example if you plot sexual boundaries horizontally and relationship intensity vertically, you might see something like this:

The sexual boundaries increase from left to right, with the classifications as:

A branch from the main sequence sometimes occurs for metamours, who a person might have some sort of sexual relationship with, but might not continue if that person’s partner breaks up with that person, but then again, sometimes these relationships do continue on their own, and…yeah, it’s complicated. Past a certain point, it’s not always clear from a single partner whether that person is main sequence or metamour.

A scattering of partners exist with a high level of sexual contact but a low level of relationship investment. These partners tend to scatter along the Friends with Benefits and One-Night Stand axes.

From there it was a short intellectual hop to wondering how many different kinds of group sex there are1, and what the relationship between them is.

So I started working on a Venn diagram of group sex. Then I started enlisting the help of all the people around me.

Then I started realizing that some of the potential overlaps are complicated beyond what you might at first think. For example, not all swing parties include group sex, yet most folks would probably think of a swing party as a group sex event.

And it soon became clear that certain rules of geometry2 precluded doing this as a traditional Venn diagram, because it’s not possible to show all the overlaps and exclusions with circles.

So the project got a little more complex.

Anyway, here’s what I came up with: Where group sex intersects with information theory!

Some assumptions I’ve made for this chart:

I have the feeling I missed some categories of group sex, though, and I don’t know how universal these assumptions are.

1 As opposed to how many different kinds of sexual activity you can have in a group sex situation, which is a completely different question altogether.

2 Specifically, group theory, about which I know less than what would fit in the white space of a postage stamp.