The next stop on our whirlwind tour of ghost towns, cunningly planned through extensive and repetitive Googling of “ghost towns west coast,” was Susanville.

It would prove an elusive target. Susanville was established in 1864 when some bloke found a big lump of gold in a remote corner of Oregon, and a bunch of other blokes came flocking to the spot hoping to find more lumps of gold. Times being what they were, it wasn’t considered a proper town because it didn’t have its own post office, so in 1901 a bunch of miners, ahem, stole the post office from a neighboring mining town, making Susanville an improper town. Or so the story goes. It is not clear to your humble scribe how one steals a post office, nor whether the legitimacy conferred by a post office remains if the post office is stolen. Such matters are not for me to understand.

I used Siri to plot us a route to Susanville, and we were off. The trip started promisingly enough when we found a turnoff precisely where Apple Maps said it would be, with a much-faded sign suggesting we were on the right track. 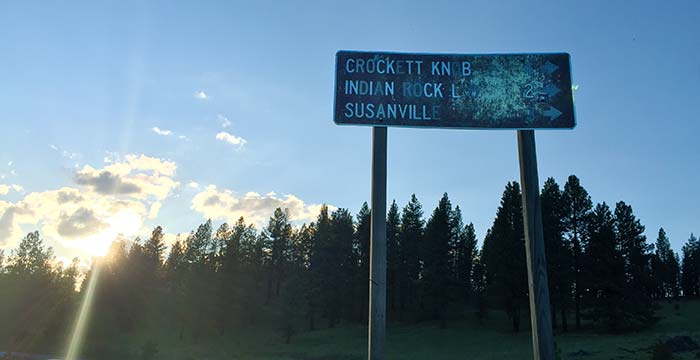 Alas, things soon became complicated. I navigated the Adventure Van for quite a long while on a narrow single-lane dirt, steadily moving farther and farther from civilization, until Siri told me to take a left turn onto a road that most completely and utterly did not exist. There was not the slightest sign that a left turn had ever existed in that spot, nor that one is ever likely to exist any time between now and when the stars burn out.

Bunny and I scratched our heads. “Let’s keep going,” she said. “Maybe GPS isn’t sure where we are. We’ll look for a left turn.”

We kept going. A left turn failed to appear. After we had traveled a considerable number of miles, with Siri telling us “make a U-turn, make a U-turn” over and over until madness threatened, I got the idea to try Google Maps.

This is not, I would like to point out, ordinarily such an insane idea. Google often knows better than Siri the ways of human navigation. In this case, however, Google was worse than useless. Siri showed us the road we were on, if I may be forgiven the literary excess of use of the word “road;” Google showed nothing but an endless expanse of featureless green. Where Siri believed there to be an exuberance of roads, including the one we could not find. Google showed nary a trace of human existence at all.

We turned around. “Turn right,” Siri said. Again, the road onto which we were supposed to turn persisted in its obstinate failure to exist.

“Maybe there used to be a road here,” I said. Bunny looked doubtful.

I stopped the van. “Siri says there’s a road right here,” I said. “Let’s get out and walk. Maybe we’ll find it.” Bunny still looked doubtful. 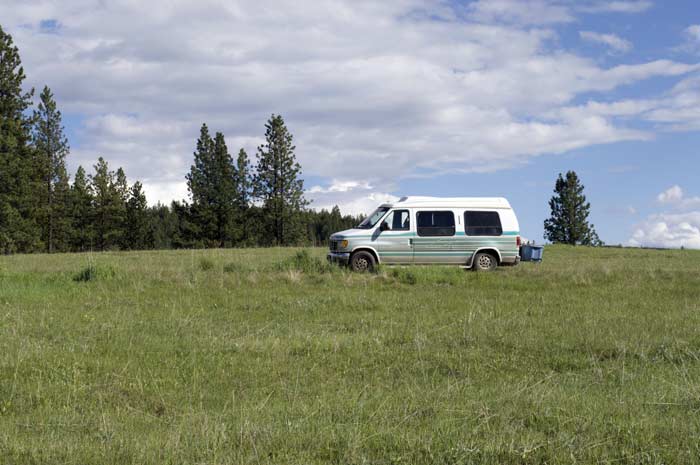 We walked for a while. “Siri says the road is right here,” I said. “Let’s just stay on the road according to GPS and see what happens.” Bunny looked very doubtful.

Still, the one thing you can count on if you’re a chaosbunny is there will be chaos. We set out through the field, watching the phone closely to keep the little blue dot centered on the road Siri insisted was there and reality insisted just as passionately was not.

When we’d walked for ten or fifteen minutes, Bunny pointed ahead. “I think this might be a road after all,” she said. “Look!”

Sure enough, there was a slight depression that was just regular enough to make it seem that, if you squinted hard enough and perhaps dropped acid, might seem it was once a road.

With a new surge in confidence, we kept walking. After another twenty or thirty minutes or so, and an inconvenient but fortunately narrow stream we were forced to jump across, we found… a road. A real, genuine, unmistakeable, honest-to-God road, exactly where Siri told us it would be. 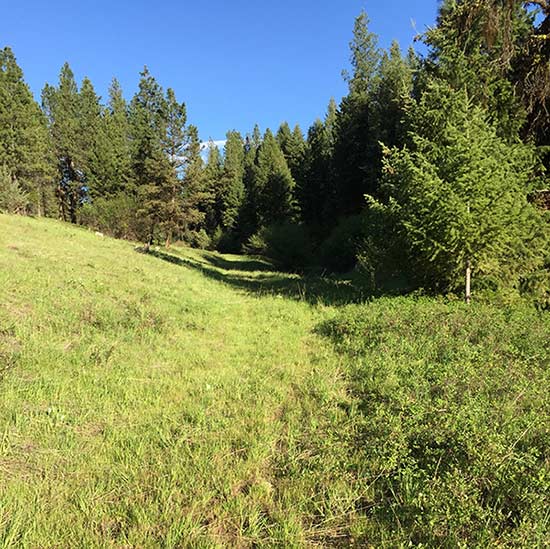 We trotted along the road and rounded a large outcropping of rock, and then, there in front of us…a decaying house, tucked in the shadow of tall trees, glorious in its ruin. We had begun to believe it no longer existed, so as you can imagine, gentle reader, that moment when we rounded that corner made our hearts sing with joy. 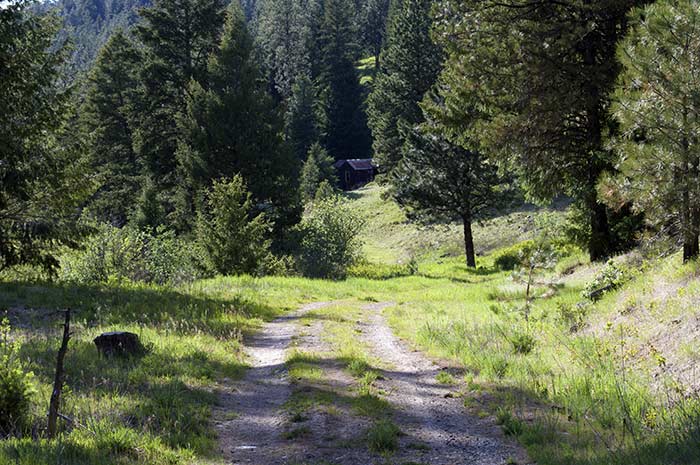 Ladies and gentlemen, I present to you: Susanville, Oregon. 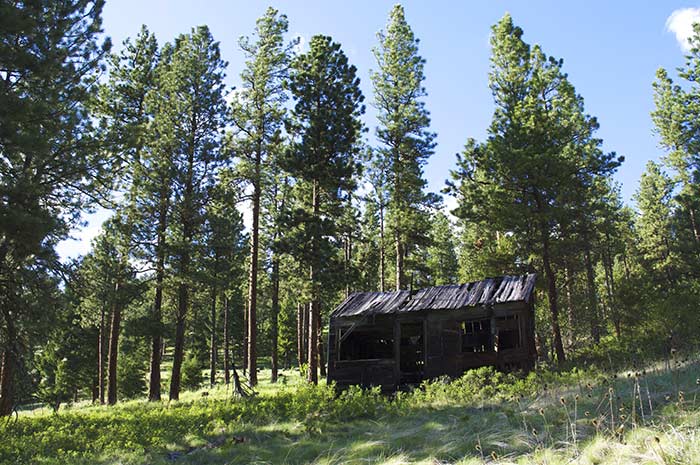 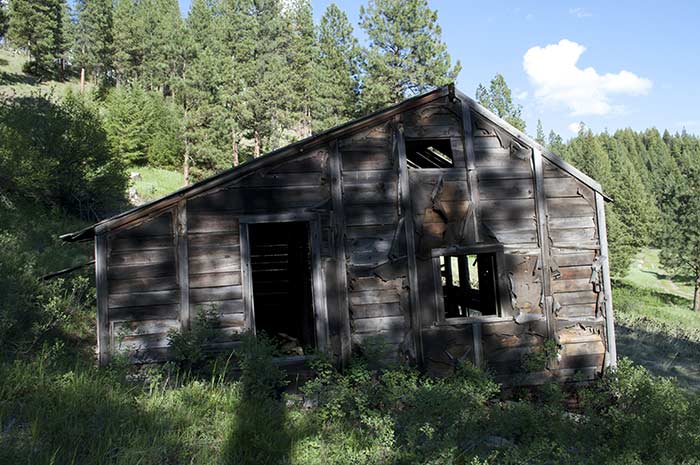 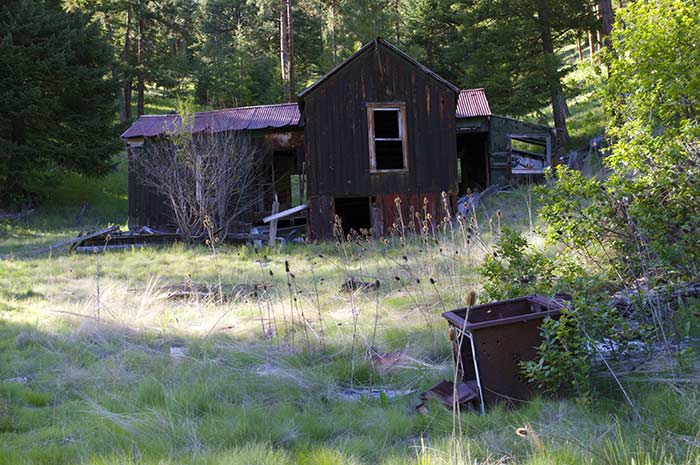 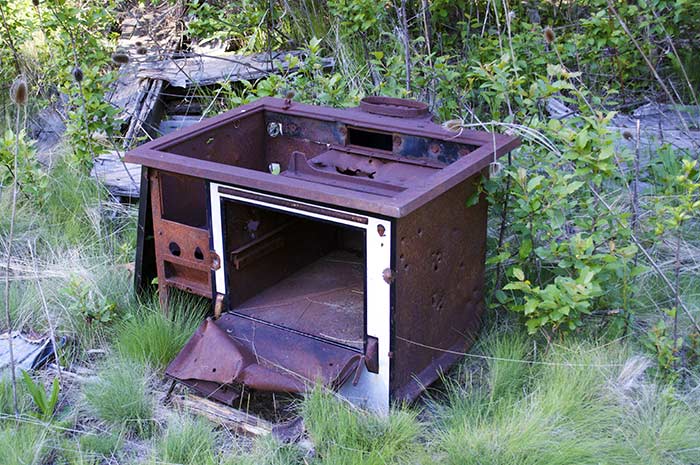 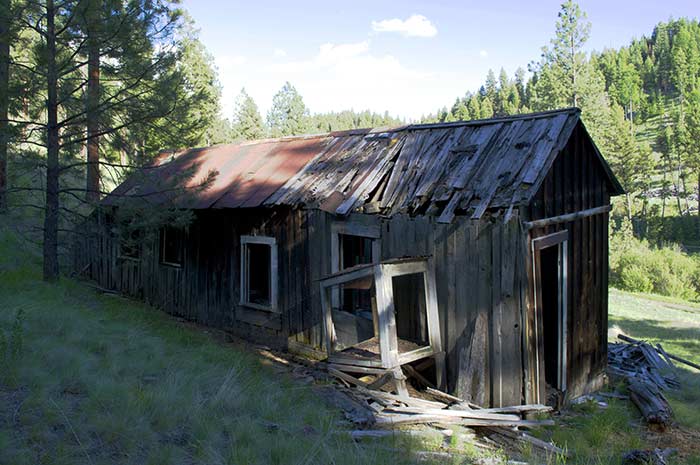 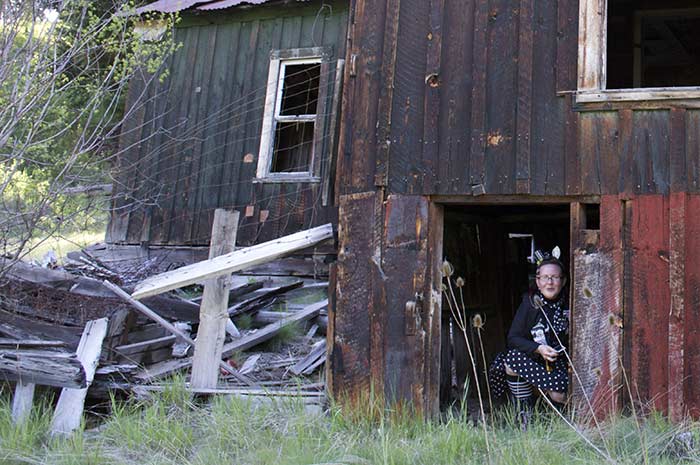 We poked around the ruined buildings for a while, taking pictures like mad and giggling like…well, like we were mad.

The largest house we found maintains silent watch over what used to be an old gold stamping mill, there on the other side of the river. Little remains of the mill but a heap of lumber. 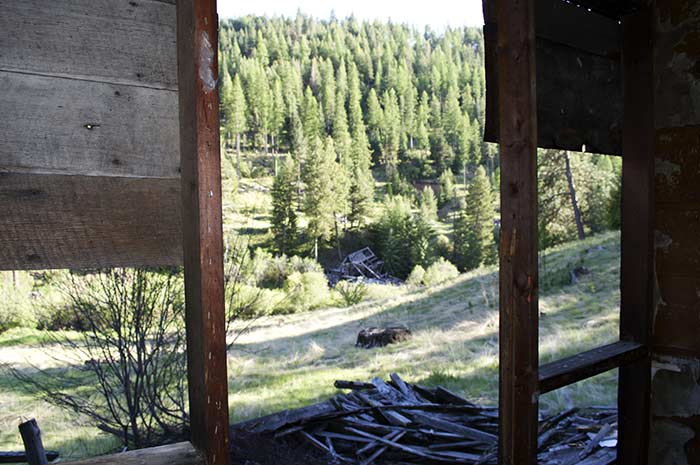 I’d love to know what life was like out here, back when people came to this place in search of wealth. The few remaining houses are quite large, and were probably surprisingly comfortable given the remote inhospitality of the place. 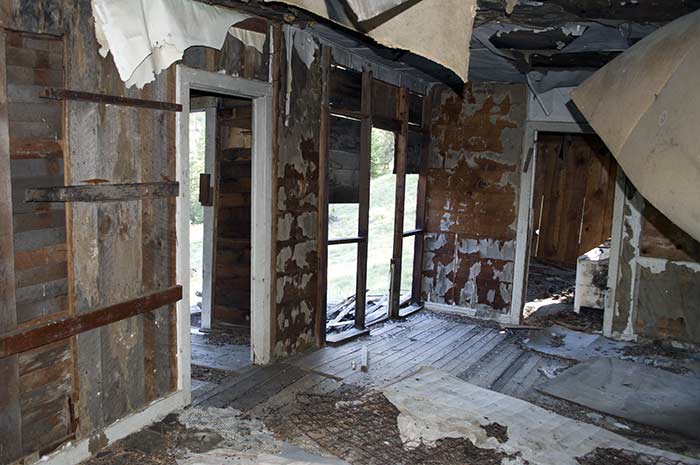 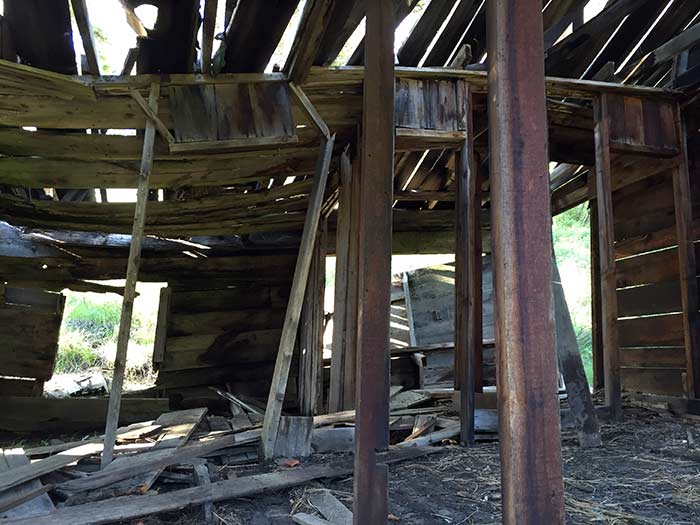 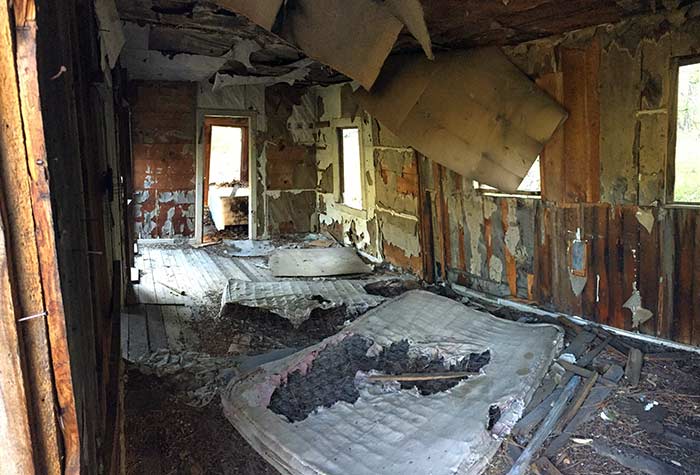 Some of the remaining structures look a bit creaky. I was reasonably sure they probably wouldn’t collapse on us without warning, entombing us in a pile of old lumber and avarice.

When tea-time came around, Bunny sat down on an ancient and massive tree stump and…well, looked very English. 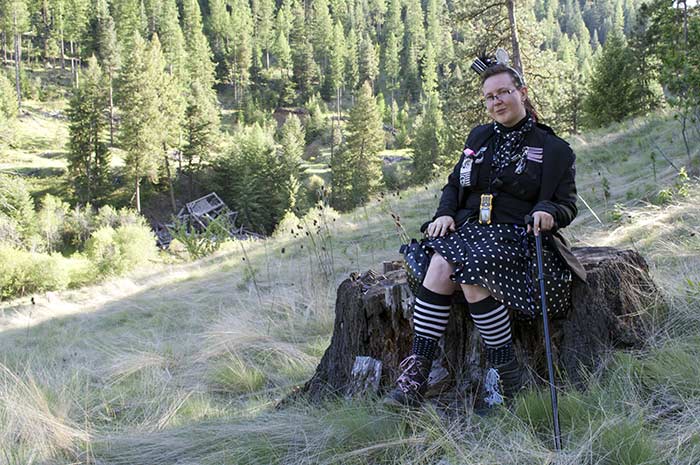 Tea properly handled, we resumed our explorations. I have no idea what this is, but it’s quite lovely. 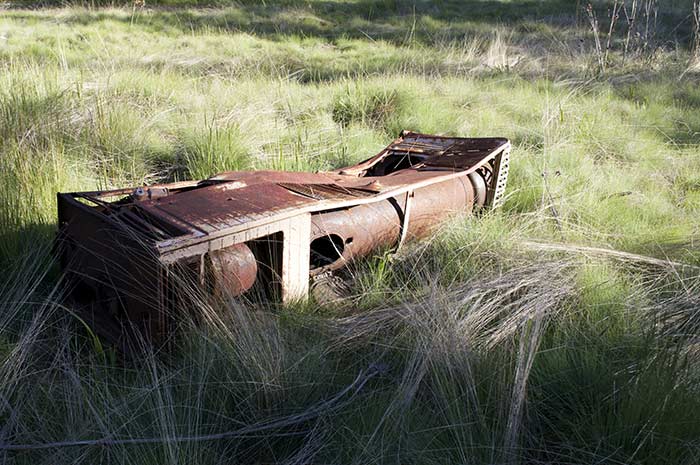 We forded the river to examine the ruins of the stamping mill more closely. At first, I thought it was a lumber mill, but Google says no, this is where gold ore was brought to be crushed and processed. Of course, Google also said there was no road out here, so what does Google know?

The view back to the largest house from the mill is quite beautiful. I don’t imagine life here was easy, but it certainly did offer scenic natural beauty in spades. 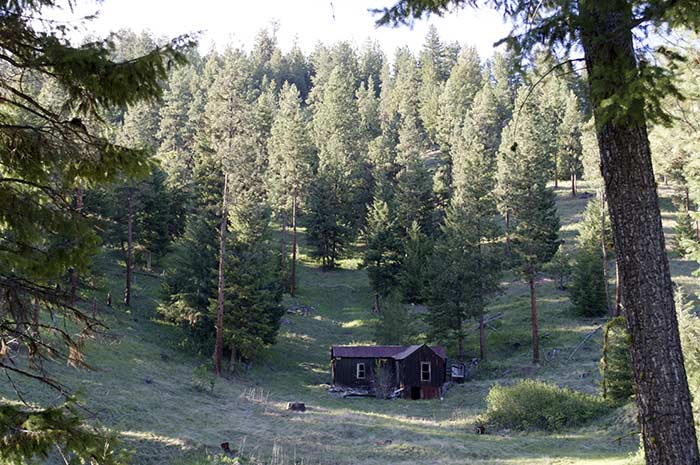 In fact, it’s so lovely I’m a little surprised nobody lives out here now.

Susanville was amazing, and it was with heavy hearts we bid farewell to it and started the long hike back to the Adventure Van.

As fantastic as Susanville was, still more wonders waited in our future, though we had to pass through stark terror to get there. That story will come in time.