Fresh from the spectacular triumph that was Susanville, the semi-mythical old mining town on the end of an ancient and long-derelict road that nobody save Apple knows about (and boy, would I love to know how Apple added it to their maps!), we spent the next couple of days in a kind of Ghost Town Limbo. We had entered that period in our adventure I have come to think of as The Faffing.

That is, in fact, exactly the point of our journey. Other countries, possessed of a less exuberant excess of rolling countryside that nobody much wants, or perhaps gifted with a more pragmatic approach to resource allocation, don’t have long-abandoned towns that just kinda sit around for a century and a half because nobody can be arsed to do anything about them.

And even in places where people do want to do things with the land, there’s just so damn much of it that if there happens to be an old tumbled-down log cabin or a gold processing building building of some sort, nine times out of ten it’s easier to work around it than to move it. So it stays there, quietly being Somebody Else’s Problem.

It’s this sort of neglectful attitude toward the dwellings of times gone that drew Bunny to the tour, as her native land of the United Kingdom of Britainlandia is, being on an island, much more conscious of making use of every square meter or hectare or whatever the hell unit of measure they use all the way over there.

So during The Faffing, we saw, and photographed, a great many tumbled-down buildings standing silent testimony to times long gone, though we were rather less successful in finding any real ghost towns. What ghost towns there are are often poorly marked, and the ones that are well-marked, we discovered, seem to be conspicuous in their existential absence when one goes to the appointed spot.

The Faffing was not a time of no productivity, but it certainly didn’t compare to the discovery of what was left of Susanville. Still, we did discover some pretty neat stuff as we wandered about aimlessly in the Adventure Van.

Like this abandoned building and rickety, half-collapsed footbridge over a surprisingly deep and treacherous creek, spotted by Bunny’s eagle eye as we drove down some county road or other.

Or this house, which looks like it ought to feature quite prominently in an episode of Scooby Doo. It was on the outskirts of some quiet little town in Oregon whose name I’ve already forgotten, but man, if I were a kid living in this town, this place would likely haunt my nightmares. 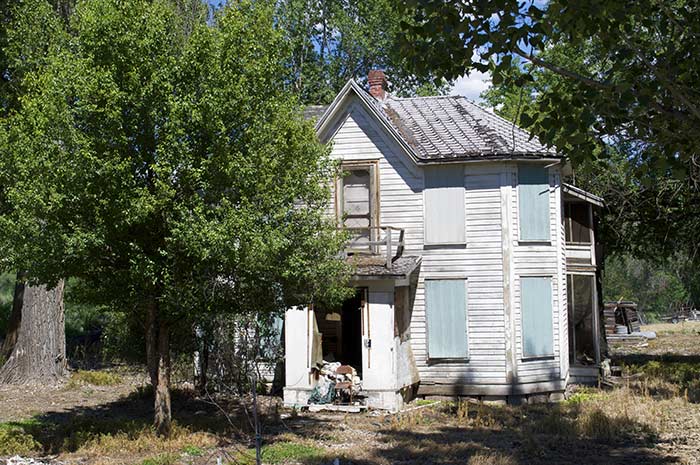 There are tons of old farm buildings lying in ruins all about the Pacific Northwest, some of which look like they might collapse into dust if some poor unsuspecting sod the next county over sneezes too vigorously. 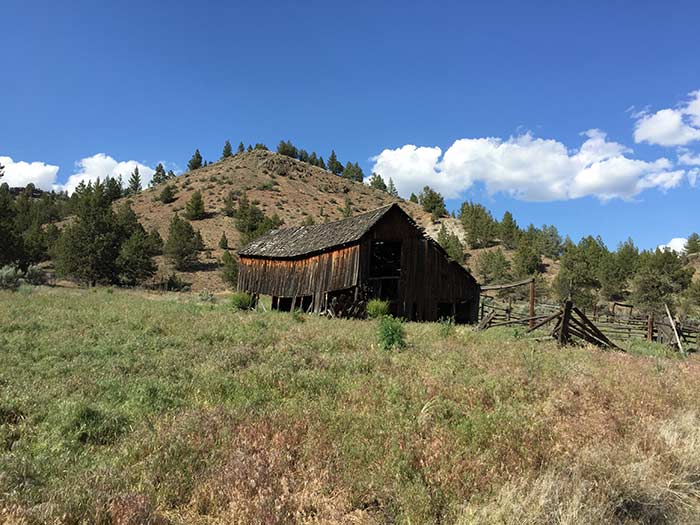 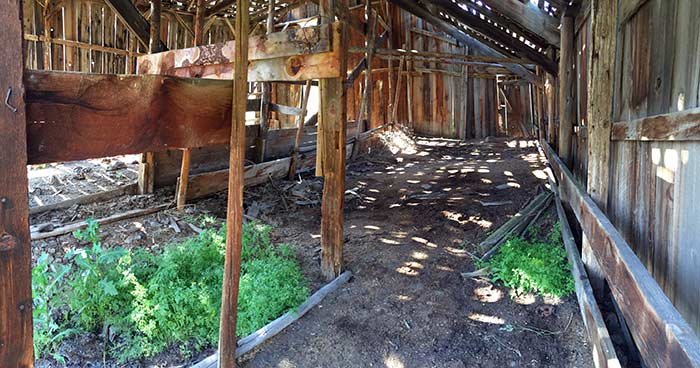 We struck gold with this find, the remnants of an old one-room school building a couple miles outside the semi-but-not-really ghost town of Shaniko, Oregon. Bunny, as per usual, spotted it and said “Hey, pull over!” 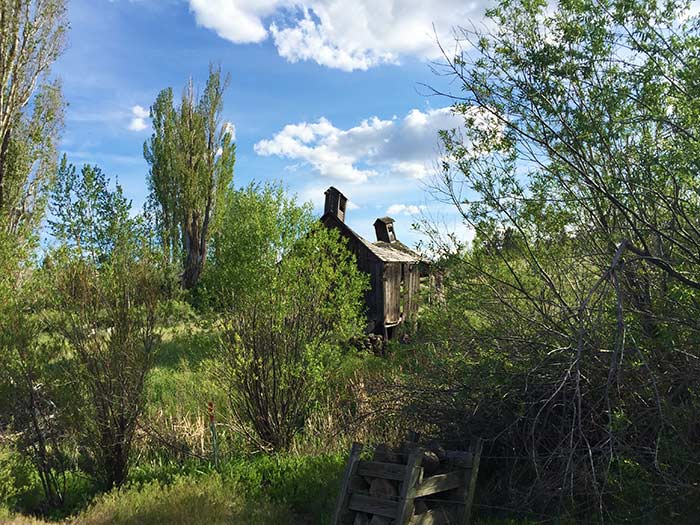 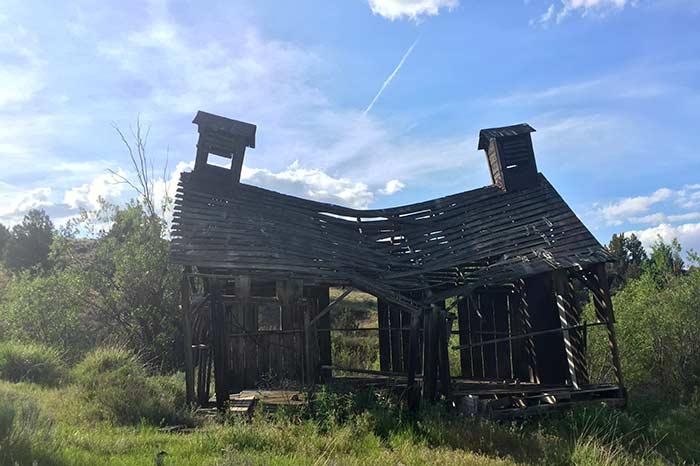 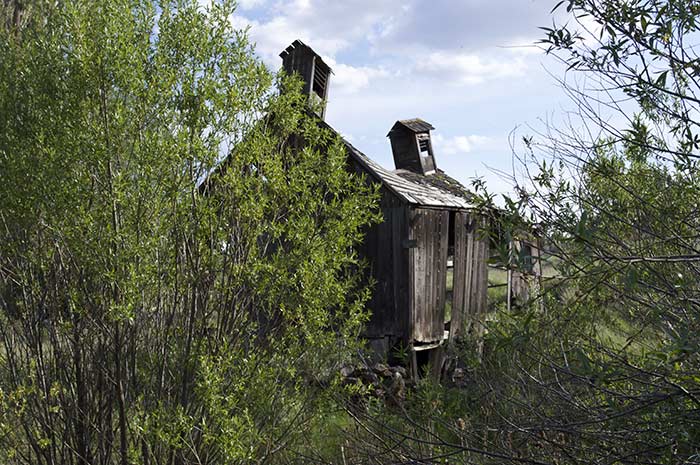 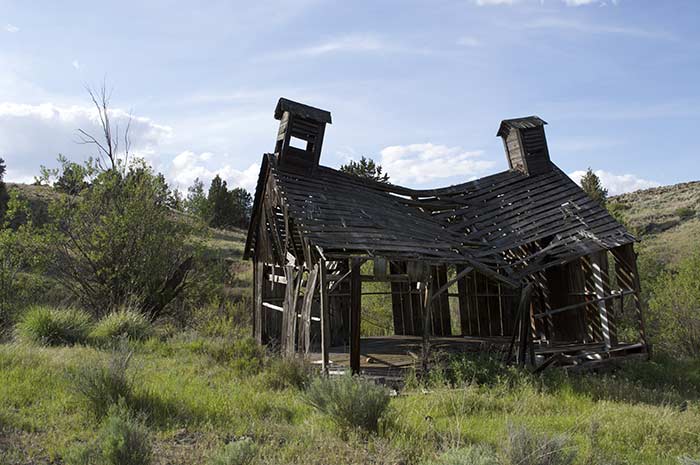 The schoolhouse looks a lot Little House on the Prairie and a lot more “Outtake from an episode of Dexter” these days, which adds, I think, to the ambiance. It’s a cool old building, for sure.

We took a random detour from looking for old ghost towns when we spotted a sign pointing to a lava flow in an ancient forest, because, you know, chaosbunnies. The detour took us a lot farther out of our way than the sign suggested, but after quite a lot of travel, we did indeed eventually come to the ancient lava flow.

Oregon’s terrain has been shaped by catastrophic geology, much of it volcanic. Enormous seas of lava once covered quite large expanses of it, wiping out everything around them and leaving behind terrain that, millennia later, still looks kind of like a lunar landscape.

Where these huge flows of lava encountered forests, the lava encased the trees in solid rock. The trees died and disappeared, leaving these formations as their only remains. 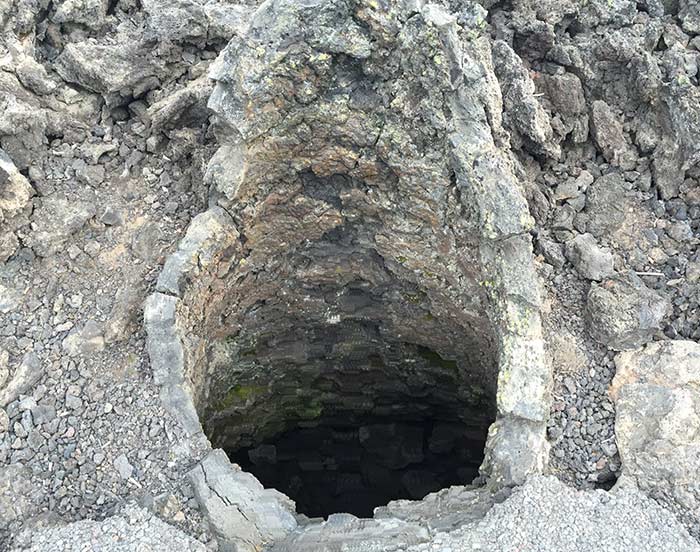 We took quite a few pictures, but as this was only incidental to our real purpose (if indeed chaosbunnies can be said to have a “purpose,” as opposed to a mere intention) we did not linger long, and were soon off.

We found some more ruins, this time just outside yet another town whose name I’ve already forgotten but that seemed to be a regional freight transportation hub, judging by the astonishing number of large trucks that formed an unending stream of traffic through the town. 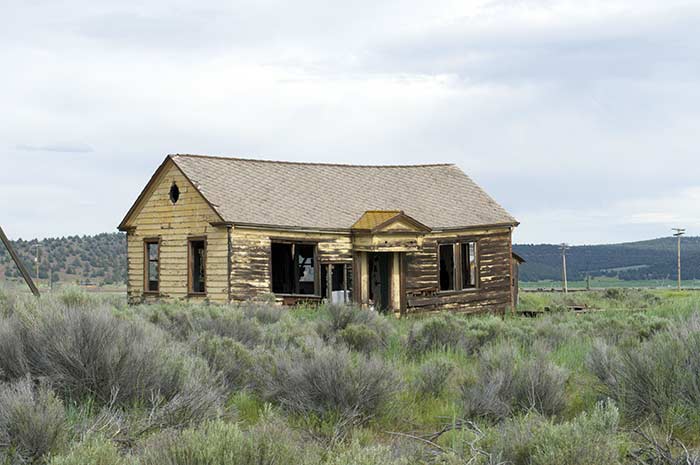 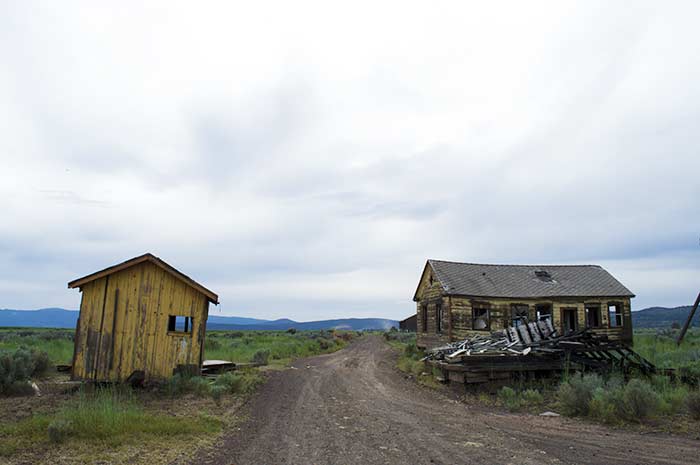 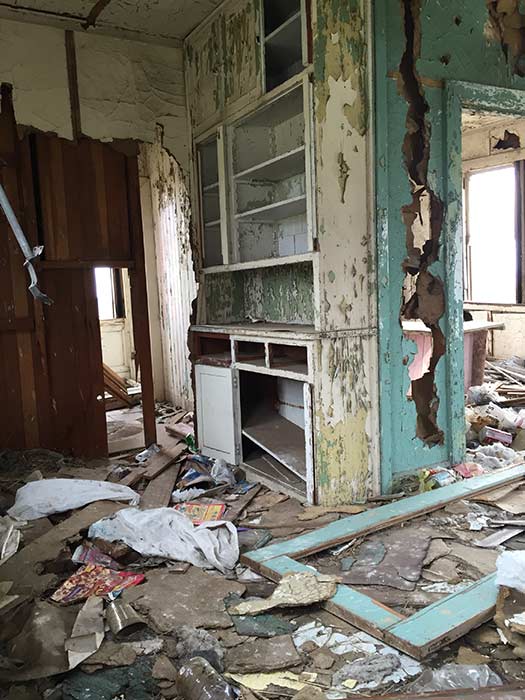 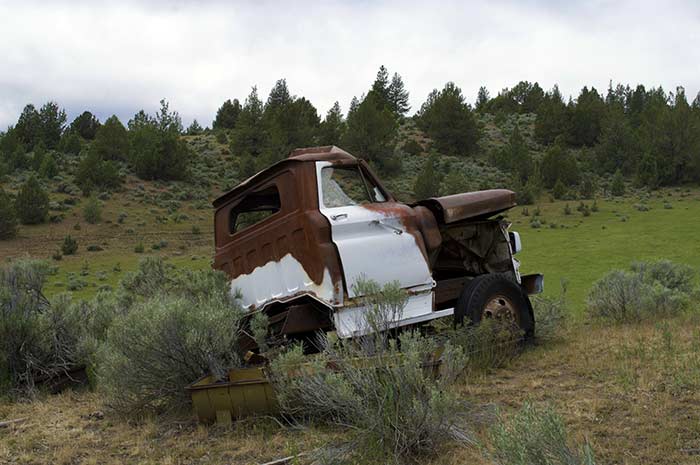 It really is quite astonishing just how many of these ruins lie about, being ruins. We stopped frequently to take pictures of yet another ancient relic of centuries gone by, sometimes to the consternation of state police who wanted to make sure that we hadn’t abandoned the van and headed off through the countryside with cameras and bunny ears and tea because we were, you know, like, in trouble or anything.

Just what set of unfortunate circumstances might force someone to abandon a van armed only with these three aforementioned things is not entirely clear to your humble scribe. Still, it is gratifying to know that people were looking out for us. 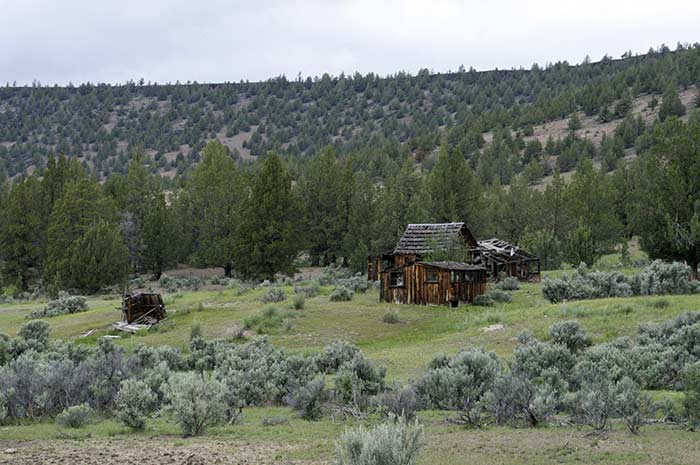 We still had some interesting random discoveries, and a few moments of stark terror, closing inexorably in on us, which I shall detail in later episodes of this chronicle.

I have a small stuffed hedgehog that accompanies me almost everywhere I go. Her name is Lilith, and she was a gift from Eve. Those of you who saw us on the European book tour likely recognize her. Lilith rode on the Adventure Van’s dashboard during The Faffing, and appeared quite unfazed by the whole experience. 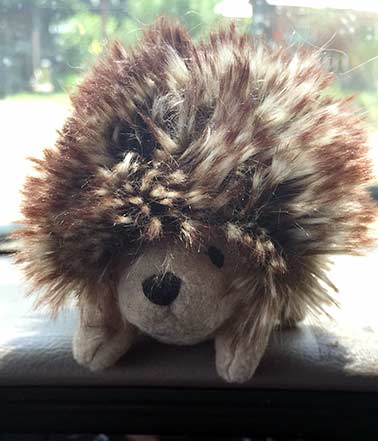