So it was that I found a fake PayPal page and, when I checked the home page of the hijacked site it lived on, I saw something odd: the home page had been deleted and replaced with a message reading “HACKED BY DARKSHADOW-TN AND ANONCODERS”.

I didn’t realize I was about to stumble on a massive (and still ongoing) security breach at two large Web hosting companies, Arvixe and Eleven2.

Curious, I did a Google search for that phrase (hacked by darkshadow-tn and anoncoders) and found thousands of Web sites that had been hacked and defaced with that message. And I do mean thousands–nearly three thousand in all.

I started working through the Google list, visiting each Web site to see if the defacement was still present. I discovered that there were three basic types of defacement, almost all of them done to WordPress sites.

Some sites had their content removed and replaced with a simple text message.

Some had the content left alone, but the page title changed to read “+ADw-/title+AD4-HACKED BY DARKSHADOW-TN AND ANONCODERS+ADw-DIV style+AD0AIg-DISPLAY: none+ACIAPgA8-xmp+AD4-“. This appears to be a misconfiguration of the automated tools the hackers used to deface the sites; it seems the hackers were trying to insert this in the page’s body. 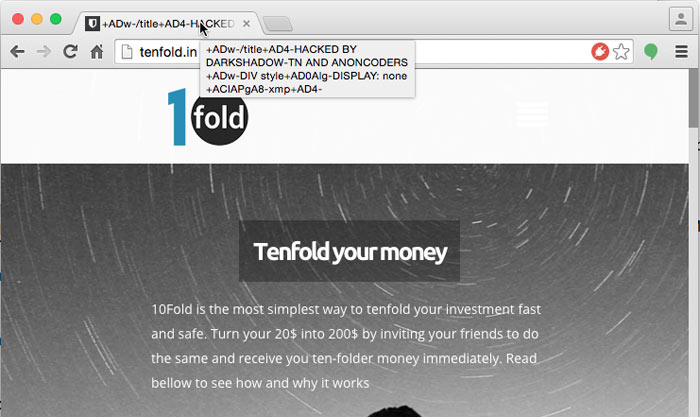 Some had a defacement message injected into the body of the Web site, usually at the top.

So, who are Darkshadow and Anoncoders?

Anoncoders is a loosely-organized group of Islamic computer hackers who use automated tools to hack poorly secured Web sites and deface them with anti-Israeli and pro-Muslim messages. They even have a Facebook page and everything.

Darkshadow is a group of pro-ISIS Muslim extremists who, like Anoncoders, often hack sites to deface them with pro-ISIS, anti-Israel, and/or anti-Western messages. They used to have a Facebook page, but it’s gone as of the time of writing this.

So we’ve got a couple of pro-Muslim, anti-Western hacker groups who generally use automated tools to hack low-lying fruit, such as WordPress and Drupal sites that are running old versions or otherwise poorly secured. So far, so ordinary–dare I say, even boring. These kinds of attacks are a dime a dozen.

That was when things got interesting.

As I went through the results of the Google search, cataloging thousands of hacked sites, I started noticing something weird: all the hacked sites were on only two hosting companies. Roughly half of them were hosted by Arvixe, and the other half were hosted by Eleven2, an outfit that’s a subsidiary of a company called IH Networks.

That raised the possibility that this wasn’t merely an automated, script-kiddie attack against a bunch of low-hanging fruit, but a breach of two hosting company’s Web control panel software or some other weak link in the hosting companies’ software infrastructure.

I sent off emails to both Web hosts letting them know they had been the subject of a massive breach.

Unsurprisingly, neither of them responded. I say “unsurprisingly” because I have a long history of discovering massive security breaches at large, popular Web hosting companies that go unrepaired for months or even years.

I sent notifications to both of those Web hosting companies about three weeks ago. Upon re-examining the hacked sites today, I discovered, disappointingly, that the security problems have not been fixed and the sites remain compromised.

So I went back and looked at past abuse reports I have filed with those companies. This is my first contact with Eleven2, but I noticed that hacked sites I had alerted Arvixe to as long ago as last September are still compromised.

It seems there is a lesson here: Both Arvixe and Eleven2 have severe ongoing security problems and are more or less completely indifferent to fixing the problem.

If you use either of these Web hosting companies, I would suggest it might be prudent to examine your site carefully for security breaches, and to move to a different Web host as promptly as possible. It’s never a good sign when a Web host ignores reports that their servers have been breached by ISIS-affiliated hackers.