When I was in high school, one of the many books on our required reading list in my AP English class was George Orwell’s 1984. As a naive, inexperienced teenager, I was deeply affected by it, in much the same way many other naive, inexperienced teens are deeply affected by Atlas Shrugged. I wrote a glowing book report, which, if memory serves, got me an A+. 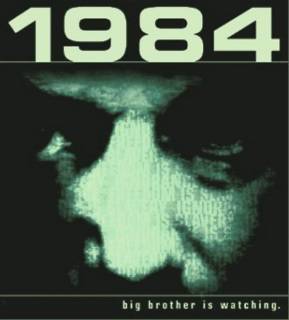 1984 was a crude attempt at dystopian fiction, partly because it was more a hysterical anti-Communist screed than a serious effort at literature. Indeed, had it not been written at exactly the point in history it was written, near the dawn of the Cold War and just prior to the rise of McCarthyist anti-communist hysteria, it probably would not have become nearly the cultural touchstone it is now.

From the vantage point of 2014, parts of it seem prescient, particularly the overwhelming government surveillance of every aspect of the citizen’s lives. 1984 describes a society in which everyone is watched, all the time; there’s a minor plot hole (who’s watching all these video feeds?), but it escaped my notice back then.

But something happened on the way to dystopia–something Orwell didn’t predict. We tend to see surveillance as a tool of oppressive government; in a sense, we have all been trained to see it that way. But it is just as powerful a tool in the hands of the citizens, when they use it to watch the government.

Being a middle-aged white dude gives me certain advantages. I don’t smoke pot, but if I did and a police officer found me with a bag of weed in my pocket, the odds I’d ever go to prison are very, very small. Indeed, the odds I’d even be arrested are small. If I were to jaywalk in front of a police officer, or be seen by a police officer walking at night along a suburban sidewalk, the odds of a violent confrontation are vanishingly tiny. So it’s impossible for me, or real;y for most white dudes, to appreciate or even understand what it’s like to be black in the United States.

This is nothing new. The hand of government weighs most heavily on those who are least enfranchised, and it has always been so. All social structures, official and unofficial, slant toward the benefit of those on top, and in the United States, that means the male and pale.

And there’s long been a strong connection between casual, systemic racism and the kind of anti-Commie agitprop that made Orwell famous. 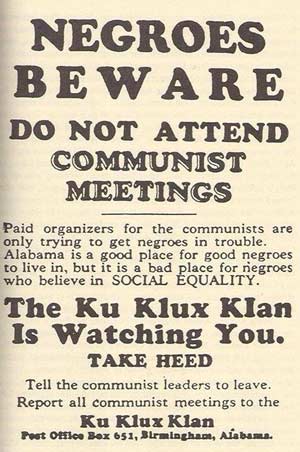 It is ironic, though not unexpected, that the Invisible Empire of the Knights of the Ku Klux Klan is raising a “reward” for the police officer who “did his job against the negro criminal”.

So far, so normal. This is as it has been since before the founding of this country. But now, something is different…and not in the way Orwell predicted. Surveillance changes things.

What Orwell didn’t see, and couldn’t have seen, is a time in which nearly every citizen carries a tiny movie camera everywhere. The rise of cell phones has made citizen surveillance nearly universal, with results that empower citizens against abuses of government, rather than the other way around.

Today, it’s becoming difficult for police to stop, question, arrest, beat, or shoot someone without cell phone footage ending up on YouTube within hours. And that is, I think, as it should be. Over and over again, police have attempted to prevent peopel from recording them in public places…and over and over again, the courts have ruled that citizens have the right to record the police.

It’s telling that in Ferguson, the protestors, who’ve been labeled “looters” and “thugs” by police, have been the ones who want video and journalism there…and it’s been the police who are trying to keep video recording away. That neatly sums up everything you need to know about the politics of Ferguson, seems to me.

Cell phone technology puts the shoe on the other foot. And, unsurprisingly, when the institutions of authority–the ones who say “if you have nothing to hide, you have nothing to fear from surveillance”–find themselves on the receiving end rather than the recording end of surveillance, they become very uncomfortable. In the past, abuses of power were almost impossible to prosecute; they happened in dark places, away from the disinfecting eye of public scrutiny. But now, that’s changing. Now, it’s harder and harder to find those dark places where abuse thrives.

In fact, the ACLU has released a smartphone app called Police Tape, which you can start running as soon as you find yourself confronted by police. It silently (and invisibly) records everything that happens, and uploads the file to a remote server.

If those in power truly had nothing to hide, they would welcome surveillance. New measures are being proposed in many jurisdictions that would require police officers to wear cameras wherever they go. The video from these cameras could corroborate officers’ accounts of their actions whenever misconduct was alleged, if–and this is the critical part–the officers tell the truth. When I hear people object to such cameras, then, the only conclusion I can draw is they don’t want a record of their activities, and I wonder why.

William Gibson, in the dystopian book Neuromancer (published, as fate would have it, in 1984) proposed that the greatest threats to personal liberty come, not from a government, but from corporations that assume de facto control over government. His vision seems more like 1984 than 1984. He was less jaundiced than Orwell, though. In the short story Burning Chrome, Gibson wrote, “The street finds its own uses for things.” The explosion of citizen surveillance proves how remarkably apt that sentiment is.

The famous first TV commercial for the Apple Macintosh includes the line “why 1984 won’t be like 1984.” The success of the iPhone and other camera-equipped smartphones, shows how technology can turn the tables on authority.

The police commissioners and state governors and others in the halls of political power haven’t quite figured out the implications yet. Technology moves fast, and the machinery of authority moves slowly. But the times, they are a-changin’. Orwell got it exactly wrong; it is the government, not the citizens, who have the most to fear from a surveillance society.

And that is a good thing.