It’s an interesting-looking piece of kit: 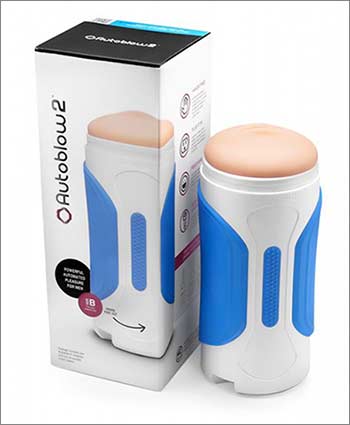 Not quite as stylish, perhaps, as the new wave of vibrators from companies like Lelo and JimmyJane, but hey, I’ll take it.

This thing has two parts: the base, which contains a motor that moves a pair of spring bands covered with little rollers up and down, and a sleeve that inserts into the base. The sleeves come in several sizes, and are made of this really bizarre soft silicone material that flops about and feels kinda squishy. (Materials science is an avenue of human endeavor that has, until now, rarely been applied to the pursuit of the ultimate orgasm, more’s the pity. For hundreds of years, leather, stone, wood, and ivory represented the state of the art for Things To Make You Come, so I’m pleased to see improvements in this area.)

Still, when the time came to put my willie in this thing, I will admit I was a little apprehensive. I looked dubiously at it for a bit, until my sweetie zaiah said “oh, give me that” and took it away from me. She squirted some lube into the “insert willie here” end and stuck it over my junk.

However, even if it doesn’t quite capture the true essence of the oral arts, this robotic sex machine does feel good. Really, really good. I was surprised, in fact. I cranked it up to maximum speed and, yeah, it did exactly what it says on the tin.

I am normally multiply orgasmic; it’s not uncommon for me to get off half a dozen times or more during sex. But this thing…well, when this thing got me off, it was intense and it got me off for good. I was done when I finally stopped screaming.

At which point I discovered a design flaw. The little control knob on the bottom? It’s little. As in, really difficult to find in a hurry when you’re gasping and panting and your body’s still shaking. I tried to yank it off my junk, but my partner grabbed me by the wrist. “No,” she said, and held it there until I found the control.

Which, naturally, brought up a really interesting idea, because I’m a kinky motherfucker and there’s no innocent pleasure I can’t find a way to corrupt with wicked thoughts.

A lot of women quite like the notion of forced orgasms, and it’s pretty easy to do, really–there are entire Web sites dedicated to the high art of the forced orgasm, but when you get down to brass tacks all it really takes is a bit of rope and a Hitachi magic wand. It’s more difficult to find ways to do the same thing to a person with an outie rather than an innie…

…at least until now.

This thing feels good on its own, no question about it, but a bit of rope, perhaps a blindfold, a gag if you don’t want to wake the neighbors, and this gadget can be so much more. Tie your guy down, set this thing going, and wait. You probably won’t have to wait to long. If my brief experience is any indication, the results should be pretty…um, dramatic.