I know, as I have mentioned before, approximately fuckall about the Marvel comic universe. I have heard of Captain America, but I’ve never read any of the comic books nor seen the first movie. So when the Internetverse was all abuzz for this new movie, filmed on a budget $95,000,000 higher than the cost of India’s Mars probe currently winging its cold and lonely way to the Red Planet, I was quite possibly the only citizen of the United States not consumed by the fires of anticipation. What wonders would the movie bring? How would it advance the franchise? Beats me. I don’t even know who Captain America is.

I am talking, of course, about the second (but for me, the first) installment of the Marvel cash juggernaut: 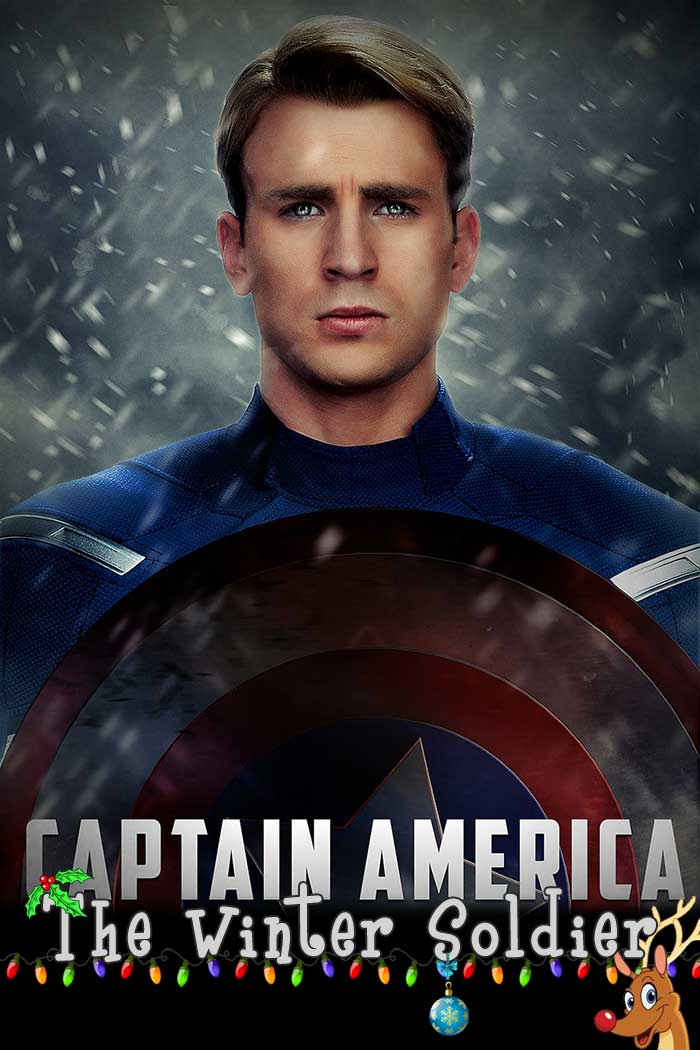 As the movie begins, we see Sonic the Hedgehog Captain America out on his regular morning jog, where he’s trotting around Washington’s tourist attractions at an average speed of approximately 40 miles an hour without even sweating, because sweating is gross and Captain America doesn’t do gross things. He zips past the Comic Relief, then zips past the Comic Relief again, then zips past the Comic Relief yet again–you know, just to make the point. The engage in dialog, of the sort that tells you we will be seeing more of the Comic Relief later in the movie. The plot wedges here for a few moments when suddenly, Sonic America Captain Hedgehog is notified that a Situation has developed and he should Prepare For Extraction. Quite why he’s out jogging when it’s clear he is in far better than great shape and has superhuman abilities is never adequately explored, given that we as the audience are left with the distinct impression that failure to get enough exercise is not really on the good captain’s surrealistically short list of character flaws.

The rest of the movie goes something like this…

SCARLETT JOHANSSON pulls up in a CHEVY CORVETTE

COMIC RELIEF: Wow, that car is…it’s…
CAPTAIN AMERICA: Yeah, isn’t it sexy? Detroit’s finest! Go team USA!
COMIC RELIEF: I was going to say ‘it looks like the unloved bastard offspring of a Lamborghini Diablo and a Ferrari GTO after a drunken tryst underneath the high-school stadium bleachers,’ but yeah, what you said works too.

SCARLETT JOHANSSON: You should totally start dating again. Like maybe an accountant or a secretary or something.
CAPTAIN AMERICA: I’m too busy jumping out of airplanes without a parachute and running laps around the Washington Memorial for that.

CAPTAIN AMERICA jumps out of the AIRPLANE without a PARACHUTE and then climbs aboard the SHIP, which would not have been possible if the PIRATES had taken the simple precaution of NOT DROPPING ANCHOR AND STANDING PERFECTLY STILL

EXPENDABLE GENERIC PIRATE: I think we should start pointlessly killing hostages. I say this not to gain any tactical or strategic advantage, but to let the audience know that we’re bad guys so it’s okay to kill us.
EXPENDABLE GENERIC PIRATE #2: Perhaps we should start the engines and make the ship, like, move or something. You know, in case someone tries to board us by jumping out of a secret stealth airplane without a parachute and then climbing on board to singlehandedly slaughter all of us.

CAPTAIN AMERICA is about to get VENTILATED by a BAD GUY when a random SHIELD AGENT floating down on a PARACHUTE shoots him in the HEAD, which is a BLOODY AMAZING shot when you think about it, especially in a world where people with AUTOMATIC WEAPONS generally can’t hit the broad side of a BARN at POINT-BLANK RANGE under IDEAL CONDITIONS 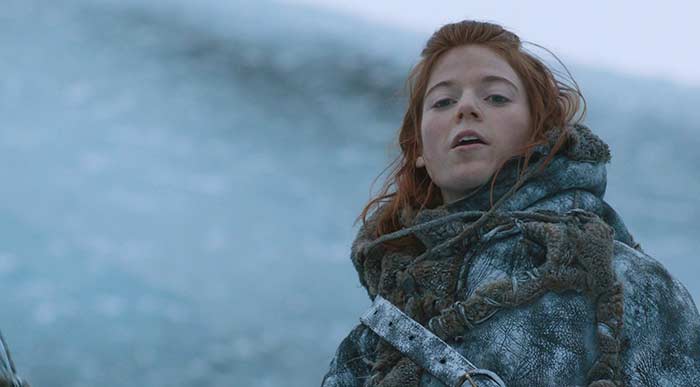 The PIRATE CAPTAIN throws a GRENADE, which totally doesn’t WORK because CAPTAIN AMERICA has a SHIELD plus we’re only a few minutes into the MOVIE

They go back to SHIELD HEADQUARTERS

CAPTAIN AMERICA: This dialog sucks. I’m going to go run laps around the Washington Monument or jump out of an airplane without a parachute or something.

SAMUEL L. MOTHERFUCKING JACKSON decides to look at the THUMB DRIVE with the COPIED FILES

SAMUEL L. MOTHERFUCKING JACKSON heads for a NOKIA STORE but on the way his SUV gets SHOT UP by a whole bunch of FAKE COPS with MACHINE GUNS

SAMUEL L. MOTHERFUCKING JACKSON: I thought we were in DC, not LA.

the ARTIFICIAL INTELLIGENCE in SAMUEL L. MOTHERFUCKING JACKSON’S CAR deplys the EMERGENCY COUNTERMEASURE MACHINE GUN from where the PASSENGER’S SEAT USED TO BE while at the same time MAGICALLY REPAIRING THE SUV’S ENGINE at the exact moment the PLOT REQUIRES IT

SAMUEL L. MOTHERFUCKING JACKSON: Shield has artificial intelligences in our SUVs but we still don’t know how to do a proper audit trail on a bunch of computer files. So technology. Very suck. Such bad. Wow.

A DUDE with a METAL ARM puts a MAGNETIC MINE under the SUV and blows it to HELL. Miraculously, the MAGNETIC MINE doesn’t stick to the METAL ARM, though perhaps on HINDSIGHT he might have thought that THROUGH a little better 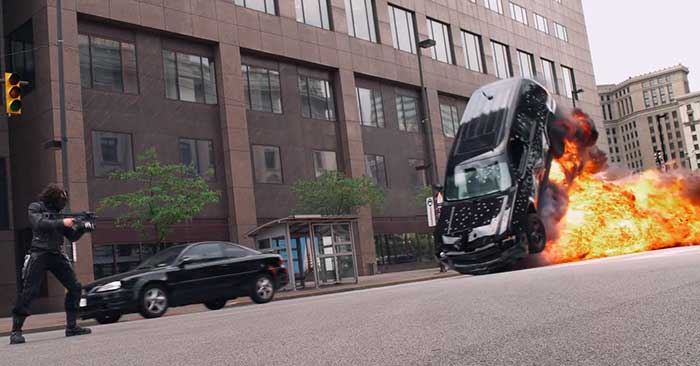 SAMUEL L. MOTHERFUCKING JACKSON escapes by using a BUTANE LIGHTER to cut a hole through the SUV and also the STREET and also the ROAD BED and down into the SEWER or something

CAPTAIN AMERICA becomes SUSPICIOUS, because of course a bad guy wishing to AMBUSH him would TURN HIS STEREO ON

ALEXANDER PIERCE: I am menacing and untrustworthy. I want to rule the world with an iron fist. Tell me everything Samuel L. Motherfucking Jackson told you.
CAPTAIN AMERICA: No.
ALEXANDER PIERCE: Okay.

CAPTAIN AMERICA gets in an ELEVATOR. It fills up with MENACING THUGS. They try to AMBUSH HIM.

CAPTAIN AMERICA: Wait, what? I’m like superhumanly strong and stuff and you try to take me down inside a very small enclosed space? What tactical genius thought that up?
MENACING THUG: We keep seeing you throw your shield around. We thought you were ranged DPS.
CAPTAIN AMERICA: I’m a hybrid class.

CAPTAIN AMERICA gets on a HARLEY. A JET FIGHTER tries to SHOOT HIM but MISSES

SCRIPT CONSULTANT: Wait, what? The machine gun on a modern fighter can put a bullet in every square foot of ground in front of it while the plane’s traveling at 600 miles an hour and you’re telling me a dude on a motorcycle can dodge them?
RUSSO BROTHERS: Shut up.
SCRIPT CONSULTANT: Man, machine guns in the Marvel universe really suck.

CAPTAIN AMERICA destroys the JET FIGHTER with his BARE HANDS

ALEXANDER PIERCE shoots his MAID a whole bunch of TIMES

ALEXANDER PIERCE: I love these little games.
DUDE WITH A METAL ARM: Why can’t you just play Titanfall like a normal human being? 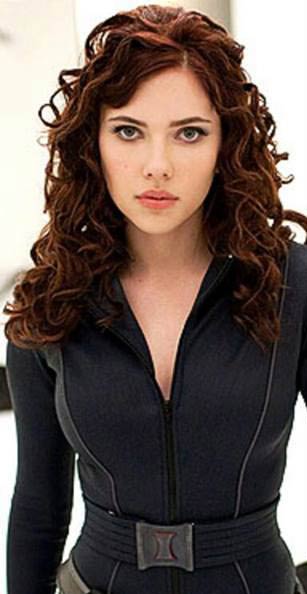 RANDALL MUNROE: Wait, who the hell has tungsten countertops? Sure, it has good heat tolerance. But I’d be nervous about using tungsten as a food-preparation surface.

EVIL AI: You have discovered the secret secretness! Now, in classic Bond villain style, I will reveal all the plans. You see, I used to be a Nazi scientist, but after WWII I was taken here and I placed my consciousness in this computer! Since then I have built an amazing power base of neo-Nazis determined to take over the world! Haha!
SCARLETT JOHANSSON: Wait, what? You uploaded your consciousness into this computer? How exactly does that work? I mean, this entire secret base has less processing power than a solar-powered calculator. And we’re supposed to believe it’s an AI? Seriously?
SCARLETT JOHANSSON: Plus, who changes all the vacuum tubes when they burn out?
SCARLETT JOHANSSON: Keeping these computers running for more than 10 minutes requires an entire team of technicians.
SCARLETT JOHANSSON: Seriously. I mean, flying aircraft carriers are one thing, but we’re really supposed to believe–

A bunker-buster BOMB falls on the SECRET BASE. It does not kill CAPTAIN AMERICA or SCARLETT JOHANSSON because of REASONS

SCARLETT JOHANSSON: Did anything about that strike you as weird?
CAPTAIN AMERICA: What, an AI of an evil Nazi scientist in a WWII-era computer secrely building an army of neo-Nazis to take over the world using flying aircraft carriers and a computer program that can predict the future?
CAPTAIN AMERICA: No.

They go to HIDE at the COMIC RELIEF’S house 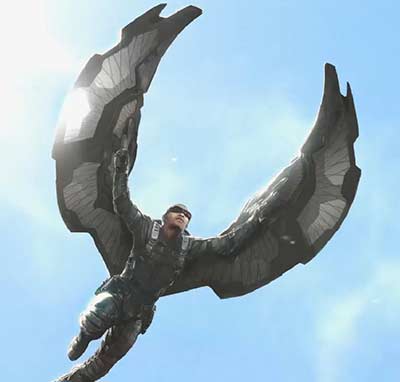 They are ATTACKED by the DUDE WITH THE METAL ARM and his GENERIC EXPENDABLE BUDDIES. Lots of people shoot MACHIE GUNS and GATLING GUNS and stuff. Nobody HITS ANYTHING

DUDE WITH A METAL ARM: Instead of shooting you from long range with my big gun, I will beat you up hand to hand.
CAPTAIN AMERICA: Wait, what? I have superhuman strength! Why on earth would you think that was a good plan?
DUDE WITH A METAL ARM: You keep throwing your shield. I thought you were ranged DPS.
CAPTAIN AMERICA: I told you, I’m a hybrid class!

They PUNCH EACH OTHER a LOT

SCARLETT JOHANSSON: Seriously, you friendzoned me?

CAPTAIN AMERICA’S SEXY NEIGHBOR: Come with me if you want to live.

They go to a SECRET MEDICAL FACILITY in an UNDISCLOSED LOCATION

The DUDE WITH A METAL ARM is strapped to a CHAIR

EVIL NEO-NAZI SCIENTIST DUDE: Look! Our secret network of postmodern neo-Nazi conspirators still exists! And we have a glowing spear! And a dude who runs fast! And that one kid from the first Matrix movie!

DUDE WITH A METAL ARM: Watch as I visit the Smithsonian!

SCARLETT JOHANSSON: Really? You put me in the friendzone?